44 North said:
But by her logic we'd have to shut down and rebuild all our subway tunnels too.
Click to expand...

Haven't we spent the last 4 years with teams rebuilding tunnels from Eglinton through to about North York? They were not only replacing the tunnel lining, but also adjusting the bore itself as soil around it had shifted and caused the tunnel to be misaligned.

This kind of maintenance work can and is done while open during evenings/weekends; but it costs more. Shutting down and rebuilding Yonge in-place would be quite a bit cheaper (capital wise but subtract excavations since that's already done) than 25 years of SOGR budget.

Which turn, the one near McCowan?

44North already addressed the Kennedy and Ellesmere curves - which would have to be replaced with almost any technology.

Suppose we could redesign Toronto's subway system like Mini Metro. However, we are only limited to five lines and five river crossings. All of the existing stations would have to be connected to the system.

How would you redesign the subway system to prevent overcrowding?

Johnny Au said:
Suppose we could redesign Toronto's subway system like Mini Metro. However, we are only limited to five lines and five river crossings. All of the existing stations would have to be connected to the system.

How would you redesign the subway system to prevent overcrowding?
Click to expand...

There is too much congestion already on the U south of Bloor. Doing anything like Muni would actually do more damage.
1

Piggybacking on your proposal: 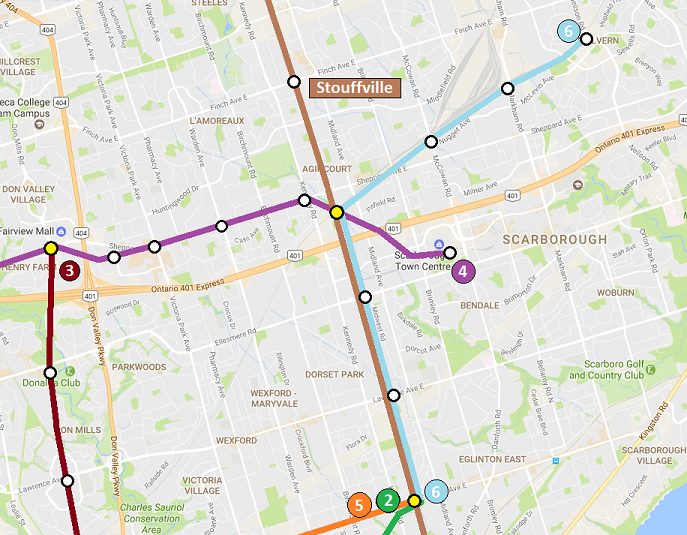 With the ways things are going, we will get RER and fare integration/reform before anything is built to SCC...

Repurposed #6 for a NE Scarborough/Malvern LRT line using rail ROW - full grade-separation from Kennedy to Malvern; they can do an on-street loop within Malvern if needed.

Yes, this is a fantasy because it will require the use of CP's corridor.


From the Stouffville line the route goes along the Lakeshore (4th track installed), to Eastern Avenue where it turns on to King Street. Four railroad lines are laid on King Street providing a bypass track for the EMU’s. The tracks meet up with the Union Pearson Express (UPX), which is then salvaged by converting it to EMU and add a few more stations and serve north-west Toronto.


It will be necessary to install bypass tracks on King St to provide sufficient train throughput through the downtown to feed the two suburban lines. The tracks are on the surface is the most economical. A better solution would be to elevate the tracks but apparently this is not aesthetically satisfactory. The best solution would be to place the tracks underground.


This route addresses the downtown section of the Downtown Relief Project. The upper portion would be addressed with a station at Pape and Gerrard. Likely an LRT route replacing the Don Mills bus. 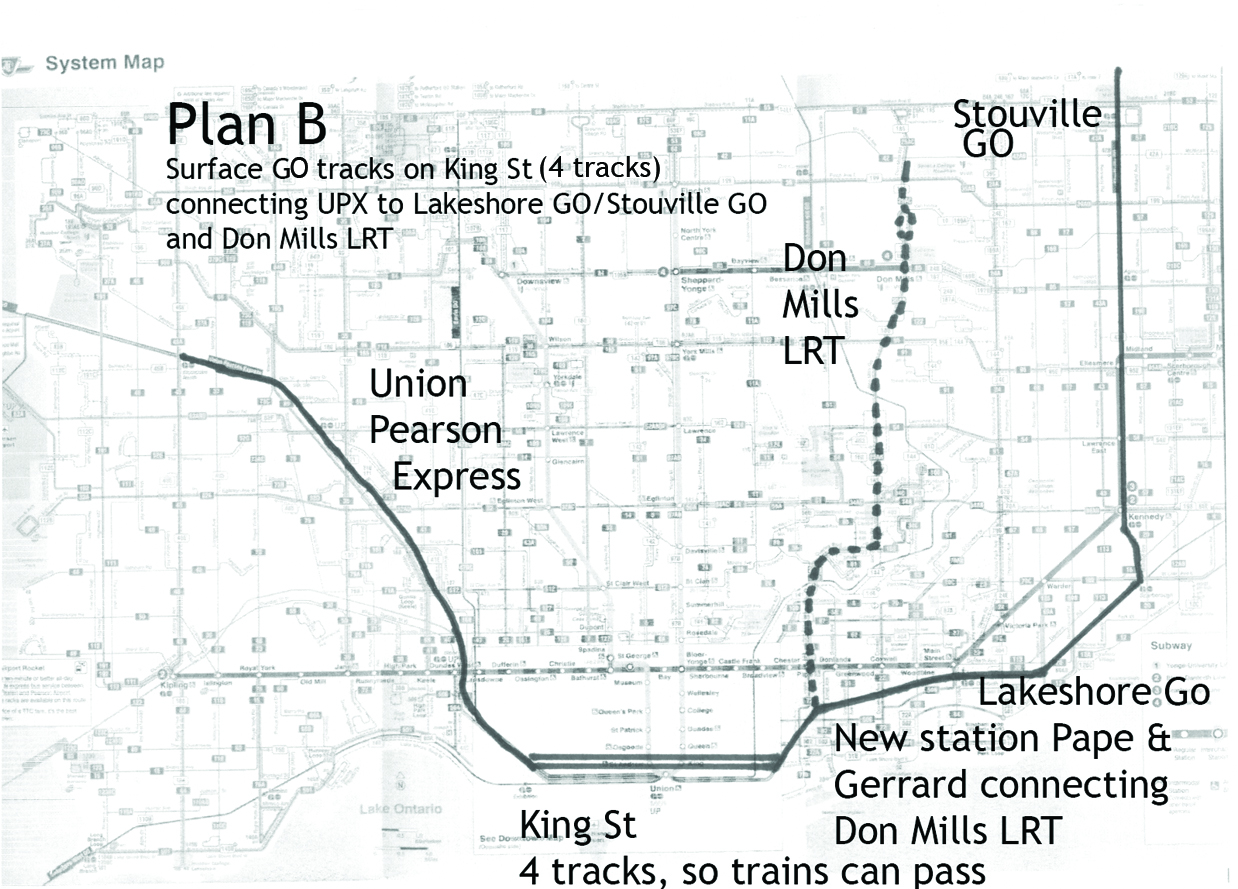 EMU's that are similar to subway cars {basically just subway trains running on standard rail track with overhead catenary power supply} are VERY common throughout the world. Toronto closest subway neighbour, Cleveland, uses such trains. All of the Delhi, Barcelona, and Sao Paulo systems do as does most of Tokyo's and Hong Kong's as well as many other European and Chinese systems. Every subway manufacturer makes them as off-the-shelf vehicles.

Catenary subways are also superior to standard 3rd rail subways, when running outside, in both reliability and safety which is why they are more frequently used in such capacities.

More reliable due to flooding or snow/ice can greatly effect 3rd rail operations unlike catenary. Safer because when using current rail corridors for their operation which many do, it mean that work can continue on other adjacent rail tracks without fear of electrocution. When, for example, you have 4 track corridors yet 2 are 3rd rail and the other 2 catenary or non-electric, it is VERY dangerous to have people work on/fix the 2 other tracks while the 3rd rail system is still running. This is one of the reasons 3rd rail systems that use current rail corridors do so almost exclusively with elevation or at a minimum very high track segregation walls to prevent electrical accidents.

For all of the GO RER system, I think catenary subways are superior even to EMUs.
M

...
It will be necessary to install bypass tracks on King St to provide sufficient train throughput through the downtown to feed the two suburban lines. The tracks are on the surface is the most economical. A better solution would be to elevate the tracks but apparently this is not aesthetically satisfactory. The best solution would be to place the tracks underground.
....
Rapid transit on King Street provides much needed service (Liberty Village) and an alternate east/west corridor alternative to the Bloor subway.

Surface heavy rail lines on King? Are you joking?

- How does traffic cross?
- Noise for the 100,000+ people that live or work along King
- Safety of pedestrian crossings?

- How does traffic cross?
- Noise for the 100,000+ people that live or work along King
- Safety of pedestrian crossings?
Click to expand...

Collateral damage. Metrolinx must run the trains at the expense of pedestrians/residents.

I'd love to see a 12 car GO train plow through a throng of jaywalking pedestrians at King and Bay.

Oh, and the financial core station would provide connections to both the St Andrew and King Stations at once! bonus! The downtown street grid will be shut down for 5 minutes, every 15 minutes, however, to allow for the trains to pass through.

The trains better watch for the drunks on King West on friday nights. They may throw their smokes puitine at the trains.

They better make sure the train goes around all those left turners at bathurst too.. takes quite a few light cycles to get through there most days.
Last edited: Mar 7, 2017

You guys think they actually put a GO train ROW in the middle of King Street? The more likely scenario is demoshing ALL the buildings on the North or South side of King in order to place double tracks. Cars need to have priority right?

innsertnamehere said:
I'd love to see a 12 car GO train plow through a throng of jaywalking pedestrians at King and Bay.
Click to expand...

This made beer go out my nose.

This is my fantasy map(s). I was reading the Waterfront Reset report and it struck me how convoluted and confused all the different schemes were for trying to add a waterfront streetcar network, and how they didn't take advantage of a possible reorganization of the streetcar network due to the presence of the DRL. This is my response for how the waterfront network could be laid out in a way that makes sense to me.

This (http://www1.toronto.ca/planning/3-rightofway-widths.pdf) was used in planning where ROWs were put for "Enhanced Streetcars" or for where "LRTs" were placed.

Grade separation:
-from Fort York east, descends into a cut-and-cover tunnel (room for stations has been provisioned for in buildings along the route)

516 - BROADVIEW
Route:
-South from Broadview station to Unilever DRL station. Follows extension of Broadview avenue south to commissioners
-West from there to Cherry, then up Cherry ROW to terminate at Sumach DRL station.

509 - HARBOURFRONT (The naming is retained but the route is different)
Route:
-West from Leslie along Commissioners, north on Cherry, west on Queen's Quay, west on fleet, terminates at Marilyn Bell Park.
-Serves entire waterfront from east to west 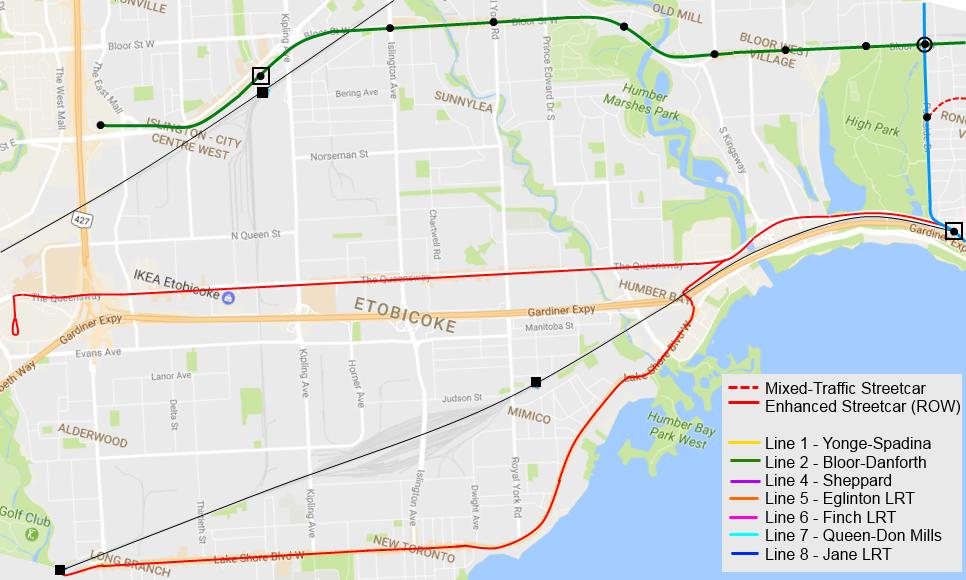 Bloor-Danforth line has been extended one station west to Cloverdale take advantage of the Cloverdale lands being offered, to allow space for a massive bus terminus with direct access to the 427. It is the logic end point for Dundas Street BRT (not pictured).

This route now terminates at Sunnyside DRL station, so there is no more awkward transfer point at Humber bay between Lakshore and Queen. I found it silly how all the different EAs for WWLRT look at ways to get across the Gardiner, onto Lakshore, etc., when it makes much more sense to truncate it at the DRL and let them either A) transfer to the subway B) transfer to GO or C) transfer to the 504, which is in a transit mall through downtown.
Because the line is much shorter and is in a ROW for its entire length, service should be much more frequent and headways better managed. 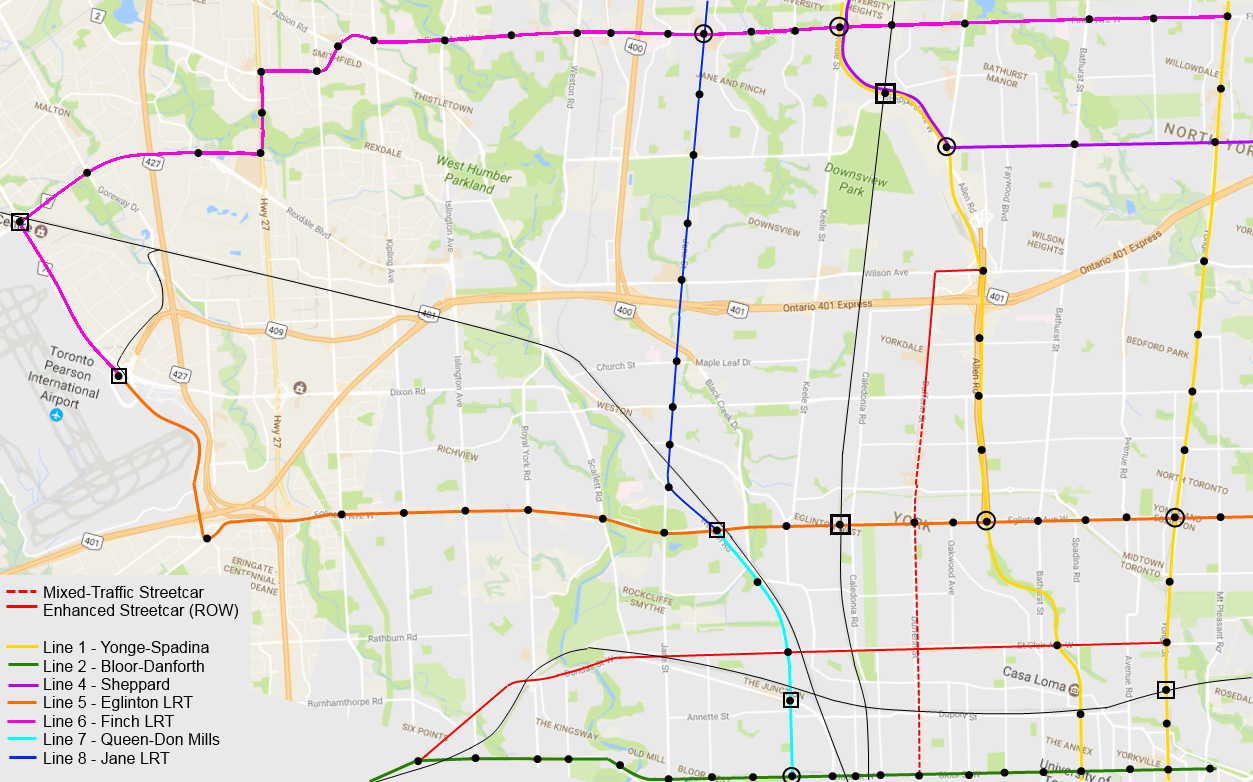