BurlOak said:
Noting that federally, both the Greens and Bloc got less than what Goldy is polling - it will be interesting if they find a way of excluding her from the debates.
...
Click to expand...

Of course they will. It's all an arbitrary popularity contest.
Dude, I'd really like a bit of a mindfunk listening to her talk. Pain makes you feel alive.

To be honest, while I think she's a level above (ok, like ten) the other two in terms of stupidity, it'd still be interesting to see who made me yawn and roll my eyes the most.
It'd be like watching boring, slightly more interesting, and mental going at it.

I can't believe I'm going to end up voting for slightly more interesting. What's happening to me as I age?
This post in honour of @steveintoronto, @BurlOak, and @Jasmine18. Never stop swimming against the current.

PinkLucy said:
Here are some debates. There are typically a ridiculous number of them. https://www.actratoronto.com/advocacy/get-involved/mayoral-debate-schedule/
Click to expand...

Why is there one scheduled for the evening of election day?
This post in honour of @steveintoronto, @BurlOak, and @Jasmine18. Never stop swimming against the current.

sixrings said:
plus ford has a personal vendetta against tory, how is that helpful. PLus smarttrack sucks.
Click to expand...

MTown said:
Why is there one scheduled for the evening of election day?
Click to expand...

That assumes we know the Election Day. Updates at 10:00
J

This election will have a lower turnout even without the intervention by the Province as its really not a competitive race for Tory to fire up voters.
S

Doesn't reducing Councillors automatically make the mayor stronger. And I don't think Ford is going to help a strong mayor system become full reality unless Mikey is about to take over. People in power dont give up power very often yet alone someone with Fords ego.

TTC Riders is Hosting a transit debate as well. 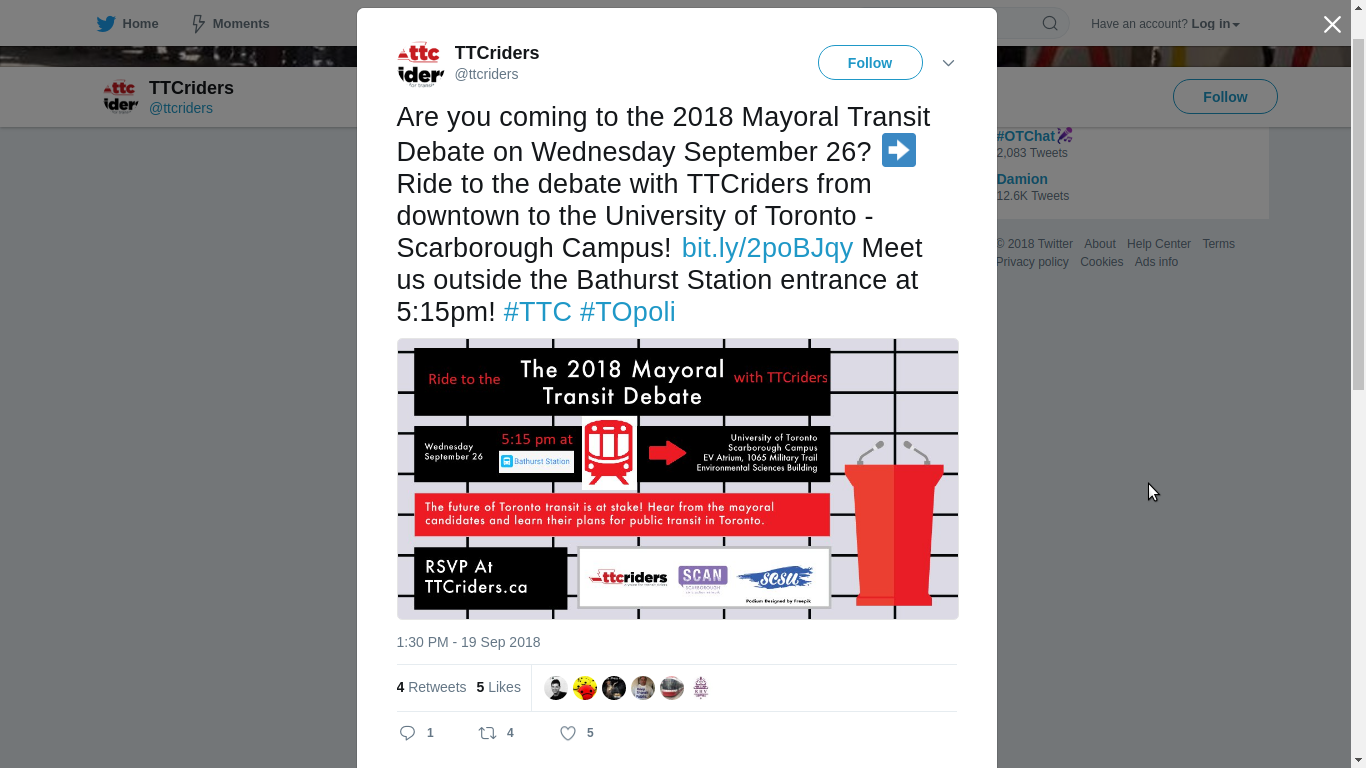 The following candidates have confirmed their attendance:

I wonder if Tory will go to any debates.

He went to plenty the last time around. I think he will have to in the face of a newly configured council.

PinkLucy said:
He went to plenty the last time around. I think he will have to in the face of a newly configured council.
Click to expand...

Yeah, he knew though that he would be a better speaker than the Fords or Chow. I bet he really picks and chooses this time around.
A

I think Tory knows darned well that Keesmaat is a viable opponent, i.e. more like Pitfield '06 than Gomberg '00.
S

EagleEye said:
I bet he really picks and chooses this time around.
Click to expand...

So much so that he might have more to lose than gain by debating her.
W

steveintoronto said:
So much so that he might have more to lose than gain by debating her.
Click to expand...

Oh I think this is very clear.

But how much can she air it, and to what effect. Tory's been front and centre during all of Toronto's crises. For his faults, and we all have faults with him (or anybody who's in charge), he's been the face of Toronto for the last four years. Can't say the same about Keesmaat.

If the hard left thinks he's too right, and the hard-right thinks he's too left, that right there may be a sign he's the optimal leader. We're a huge ass city with a core, central area, and expansive suburbs. He can't be part right some of the time or all right all the time. He'll find the somewhere in between. Which is why he'll assuredly win.