Plans to fill in Allen Road

W. K. Lis said:
There is the Beltline Trail (officially Kay Gardner Beltline Park) running parallel to Eglinton between the Allan Road and Chaplin Crescent. Bicyclists could bypass that section and could also use Castlefield to continue their trips. The Beltline Trail is missing a bridge over the Allen Road, which would continue it to at least Caledonia Road. If done properly they cold connect the Beltline as part of a bike lane/path network along Eglinton.
Click to expand...

I moved this from the Eglinton thread. As for filling in the Allen, it looks like the window of opportunity has been missed, so we may want to look at other ways of alleviating the bottleneck at the bottom of Eglinton and giving an alternate route downtown.

Earlier I recall a concept to tunnel the Allen under Eglinton and then join up with Bathurst. Rocco Rossi also suggested continuing the tunnelling all the way to the Gardiner.

Maybe we could use the Key Gardiner Beltline trail. It may be too narrow, but I will assume it is at least the 10m that would be required. A SB off-ramp would be located north of Elm Ridge Dr. and would continue south to Aldburn Road. A similar on-ramp would be built from Aldburn Road to Elm Ridge Dr. and then onto the Allen. These would be connected to the beltway and continue to Bathurst Ave. and Chaplin Cres. I have an option with traffic signals and stop signs at the Allen, or with a "roundabout" using the 2 bridges. (I also have a SB to EB only option which is probably the worst of the group). The Beltline road would have no turns onto Oak Park Road - I suggest stop signs, but traffic lights may be needed because of the proximity to Elm Ridge Circle. At Bathurst, I would limit turns to EB to SB and NB to WB. It would join into Chaplin Cres. at a Y intersection.

Would the locals accept this - most certainly not, but it was a fun exercise to try to come up with a less expensive solution. After all, every decade the "extend Allen" argument gains traction so why not plan ahead. 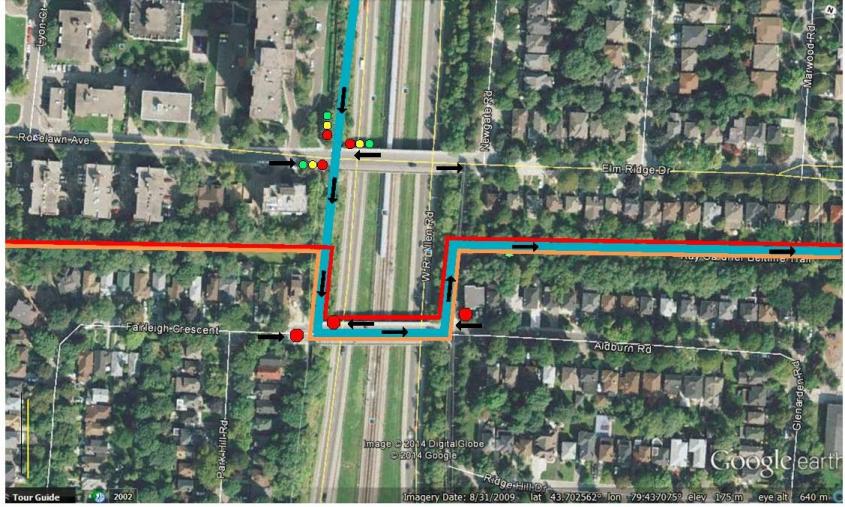 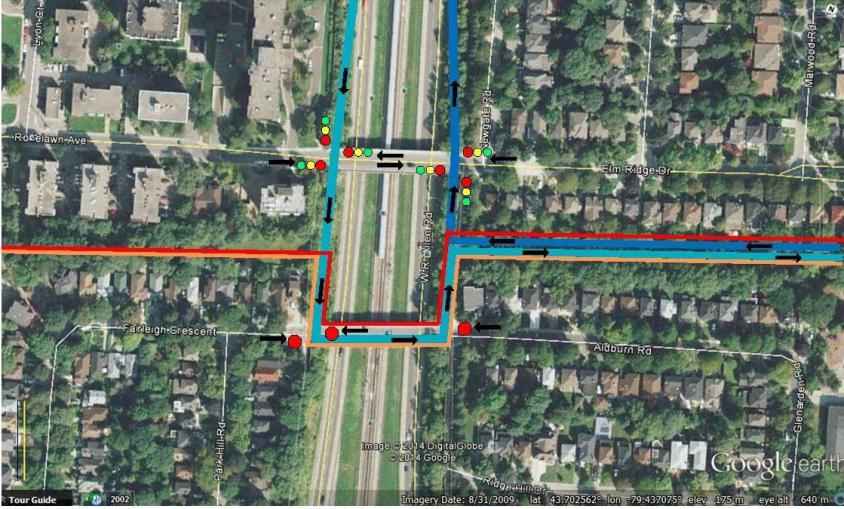 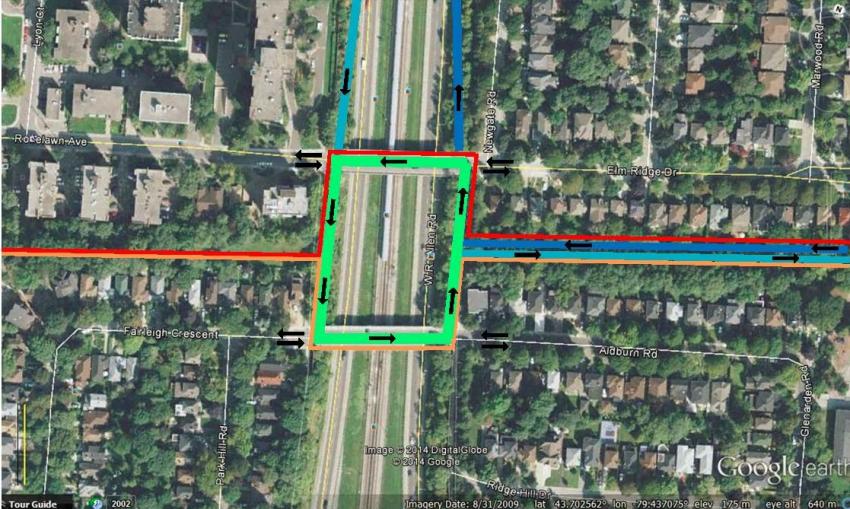 I wish people would zoom out their googleearth a little more: 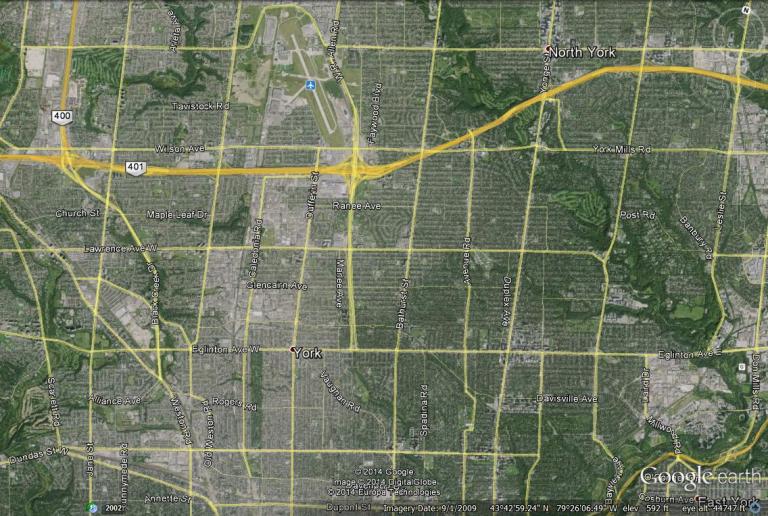 No matter what you do with Allen Road such as terminate it at Lawrence, extend it further, traffic circle..., it will always be a high capacity roadway connected to a lower capacity street grid. Traffic will always be queuing to get off it and also unable to get onto it. You can't put lipstick on this pig. There's only 1 solution. Get rid of it!

Neil said:
I wish people would zoom out their googleearth a little more:

No matter what you do with Allen Road such as terminate it at Lawrence, extend it further, traffic circle..., it will always be a high capacity roadway connected to a lower capacity street grid. Traffic will always be queuing to get off it and also unable to get onto it. You can't put lipstick on this pig. There's only 1 solution. Get rid of it!
Click to expand...

Or option two... runs and ducks.
Loving it!
S

Part of the problem and you can see it from this picture is that neither Dufferin nor Bathurst has proper on and off ramps. I am sure there has to be some people who use the Allen as a way to get off to get to Bathurst. Similarly Dufferin has the same problem.

Hear hear. I'm so sick of being held hostage by a bunch of pot-smoking naifs who decided before I was born that I wouldn't need roads when it was my turn... I'd just teleport to work, or, barring that, taking my Jetson flying car.
I am a Canadian, a free Canadian, free to speak without fear, free to worship God in my own way,
free to stand for what I think right, free to oppose what I believe wrong, free to choose those who shall govern my country.
This heritage of freedom I pledge to uphold for myself and all mankind. —John Diefenbaker, Canadian Bill of Rights, 1960

Where can I get said Jetson flying car?
W

Interesting reading opinions from 5 years ago. The optics on highways has changed a lot since then, removing highways is now the modus operandi for most of the western developed world and now even cities like Houston and Dallas are with the program and are actively looking at removing large chunks of their urban highway network. The "war on the car" rhetoric that filled minds 5 years ago has been thrown away much like its biggest champion Rob Ford has been thrown out of office into irrelevance. Now the paramount debate in the city at the moment is about tearing down the eastern section of the Gardiner east of Jarvis. That is actually what has inspired me to dig up this thread and read through it.

So... Where do we stand on this today?


My take is that the Allen Road prevents development along the Spadina Line, and we are dedicated to building transit oriented development in this city alongside our transit corridors. The Spadina line despite being around for much longer has had nowhere near the size or scale of the development the Sheppard Stubway has had. It is clear that the subway is anathema to creating desirable conditions for development, in particular walkable neighbourhoods which are highly prized by todays and future society. The Allen is currently sitting on PRIME real estate. This is also a central part of the city which will soon be the interchange of two subway lines at Eglinton-Allen. The Allen moves (at a snails pace) so little people to nowhere its existence cannot possibly be justified when it flat-out ruins this stretch of Eglinton and Lawrence and prevents development along a subway line.

Personally I would want to fill in the Allen trench and keep a 4-lane road with a complete street on the top of the Spadina line. Streets are not bad, just expressways. This should give substantial space for both development and parkland, as well as connect our cycling trails with Eglinton Bike Lanes, Cedarvale and Beltline. Further investments at Downsview can connect our now mega-Cycling Network with the York University Heights bike trail network in North York. Here is a pdf of our cycling network found here.

Lastly, with so many people expected to move to Toronto over the next few decades and needing to live somewhere, I don't see how we cannot remove the Allen. We cannot afford to have those people move to the suburbs when there is a transit-corridor in the urban core (yes, we must begin thinking of Midtown as part of our central urban core) of our city that is sitting empty ripe for development.

So did anyone here see the Terms of Reference for the Allen?! It was like, back in October.

The City is doing an EA to study the future of the Allen, from Transit Road to Eglinton Avenue West. There are 6 major options that will be considered: The EA will take a few years, but this will have the clout of the Gardiner East debate, you can be sure of that.

Liking options 4, 5, and 6. All would do wonders for the Lawrence Heights revitalization. This will be a fight for sure. In addition to the spend vs save debate, there are lots of car "dependent" types east of the Allen, and lots of transit riders, cyclists, and pedestrians west of it. The former group often using it to get to and from the 401, and the latter group often having to traverse one of its many ugly overpasses as part of their commutes. It may be years away, but I expect the all too familiar uptown clash of urban and suburban values to present itself once again.
Images are not to be reprinted, reposted or used for any purposes whatsoever outside of the Urban Toronto forum without my express consent. Contact me via the following:

^That is why I like the option of a surface road.

Retain the Allen, but make it into a complete street and line it with development on either sides. The Allen's traffic will dissipate and become local.

This is on a subway line, the potential here is massive, and will become overwhelmingly so by 2030 when downtown, midtown, and waterfront lots are fully developed and developers look elsewhere to house Toronto's growing population.

WislaHD said:
^That is why I like the option of a surface road.

Retain the Allen, but make it into a complete street and line it with development on either sides. The Allen's traffic will dissipate and become local.

This is on a subway line, the potential here is massive, and will become overwhelmingly so by 2030 when downtown, midtown, and waterfront lots are fully developed and developers look elsewhere to house Toronto's growing population.
Click to expand...

Agree 100%. I think option 4 is most tuned to allowing higher density development. There would be major value in these lands with the Spadina subway extension completed, and the Vaughan Metropolitan Centre (Vaughan's new downtown) taking shape. Two downtowns linked by a subway, and a major east-west LRT not too far away. Sounds like a beautiful recipe to me, as long as the lands are zoned appropriately.

If option 4 were chosen, then Marlee Avenue may have to be downgraded to a local road rather than a collector road.

If options 5 or 6 were chosen, then Marlee Avenue may end up becoming congested (though temporarily for Option 5).

DonValleyRainbow said:
Sounds like a beautiful recipe to me, as long as the lands are zoned appropriately.
Click to expand...


Wait for the wrath of the nearby residents who will start screaming blue murder at any suggestion of high-density development in THEIR neighbourhood. The mere mention of infill condos where the Allen is now will bring the usual fears of traffic congestion, too many people, changing the entire feel of the neighbourhood, you know the rest.
You must log in or register to post here.
Share:
Facebook Twitter Reddit Pinterest Tumblr WhatsApp Email Share Link