ErieHall said:
So why not just appeal the ruling instead of going straight to the notwithstanding clause?
Click to expand...

Time constraints. notwithstanding will institute the 25 wards in time for October 22nd, while an appeal will be unlikely to get a stay order in time for the elections. This means that Ford's policy effectively gets a 4 year delay until the next term of council, if ultimately upheld through a standard appeals process.
P

syn said:
I can see Ford doing this whenever he doesn't get his way.

What do people expect? He thinks he's the ruler of the province. Democracy is for libtard elites!

Hopefully the other parties get their act together in the next four years. 8 years of Ford would seriously damage the province.
Click to expand...

animatronic said:
But we already have precedent that letters aren't enough. In 2008 the opposition parties with a collective majority sent GG Jean a letter saying they would form a government after defeating the PCs on a non-confidence vote, and she still allowed Harper to prorogue parliament. Her (sound) reasoning was that the House is the only appropriate place to judge the PM's confidence.

That said, she also insisted that Harper promise to re-convene quickly, as avoidance of the House is not an acceptable strategy.
Click to expand...

All true. If Harper hadn't have had support when he reconvened the house though, the GG would have likely have asked another leader to form a government.

But, the GG did insist on not only a short break (the house returned the following month in January 2009), but an early vote on the budget - a confidence matter.

The strategy of delaying things, only works on the assumption that confidence in Doug Ford grows. Given how early we are things (Harper had been PM since 2006, and been re-elected in 2008), that cabinet isn't fully backing Doug Ford already is staggering.

What a hill to die on!
T

sixrings said:
Can I ask a stupid question... how would a smaller council help the suburban areas more than the downtown areas. It sure looks like all the suburban councilors are not happy with the ruling while the downtown ones are happy. Is it because then they would have more votes towards things such as suburban subways?
Click to expand...

It does not. In fact the west end of Toronto is hurt the most by the reduction, in terms of voter parity. The largest wards in the city become the three Etobicoke ridings and York South Weston.


animatronic said:
Downtown provincial ridings have more population than outer ridings, and as more condos get built the disparity will become worse.

It's not gerrymandering in the traditional sense, but with Scarborough and Etobicoke being more conservative-friendly this does give the outer regions more relative power.
Click to expand...

Not the case using the last census data - The four largest Wards (ridings) based on population are:

Richard White said:
It may also cost him his leadership at the expense of destroying the party.
Click to expand...

Like Miscreant, I’m skeptical. If anything, I suspect invoking the Notwithstanding Clause will be popular among the Conservative base. They’ve been railing against judicial activism for years. The people who will be outraged by this are unlikely to be Conservative voters anyway. And for the rest of Ontario outside the Tory base and the bien-pensants? While the proper limit, if any, to unelected judicial fiat is an increasingly important issue for Canada, I can’t see the vast majority of Ontarians getting too worked up about this.
N

Palma said:
The Liberals have already damaged this province - you guys are unreal - the stuff McGuinty got away with and was never charged is insane
Click to expand...

This is someone who morals are so low, that he fully backed Rob Ford, who admitted to racism, massive drug abuse while Mayor, and trading his wife's sexual services for ... gosh, not even sur for what.

Even the right-wing media made fun of Rob Ford's offers of sex with his wife: 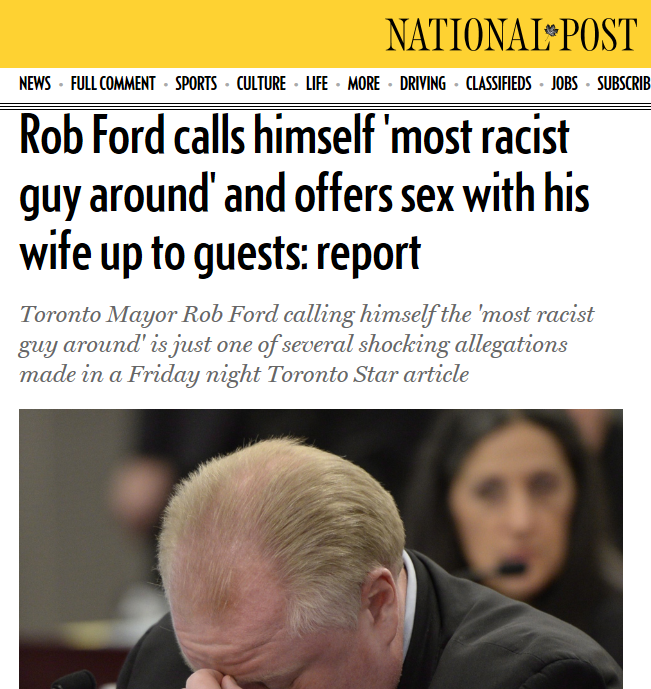 McGuinty, at the first whiff of wrong doing, did the right thing and resigned. I don't think Doug Ford has that ability.

Proposing to suspend basic human rights, to make a minor change to the number of city councillors in Toronto is laughable. It makes a fool of every PC MPP, and anyone deluded enough to vote for dirt like Doug Ford.

Palma said:
The Liberals have already damaged this province - you guys are unreal - the stuff McGuinty got away with and was never charged is insane
Click to expand...

When is the last time the Liberals used the NWSC to get their way?
J

innsertnamehere said:
yes it is - but it is generally understood in parliamentary convention that the LG is to be a figurehead only. She may have that constitutional power, but convention generally says that it is to be used in only the most extreme of situations. A premier invoking the notwithstanding clause completely legally isn't the sort of thing the LG is supposed to prevent.
Click to expand...

No, disallowance is a federal power, as it also once was a power of the UK Parliament over its Dominions. Of course an LG can independently reserve legislation as well or be instructed to do so. It was previously almost a convention that the NWC not be used, and it only ever has been under the most brazen circumstances (e.g. Quebec's language laws). The LG's reserve powers include the protection against the arbitrary rule of a dangerous ignorant asshole like Doug Ford who is, quite simply, unfit for office.


animatronic said:
R&D is dead letter, and even then it's not an effective check. The province can just keep passing the same legislation until the LG gives up blocking it.
Click to expand...

Disallowance is a power of the federal cabinet.

toaster29 said:
It does not. In fact the west end of Toronto is hurt the most by the reduction, in terms of voter parity. The largest wards in the city become the three Etobicoke ridings and York South Weston.

Not the case using the last census data - The four largest Wards (ridings) based on population are:

Remember that the existing ward boundaries were equally fair when implemented in 1998 - over 20 years population changes made them very disproportionate, to downtown's disadvantage. By selecting the 25 ward model, you get a 5 year head start on that disproportionate mis-representation.
T

To my knowledge these lists are not yet available using the 2016 numbers.

Regardless, even using the city's projected numbers, the consultants for the Draw the Lines 2018 Ward Redistribution said they would not consider the Provincial riding boundaries precisely because "[t]his arrangement still raises some concerns with voter parity between two potential wards in Etobicoke. Etobicoke Centre and Etobicoke-Lakeshore have a 2026 population variance of +22% and +21% respectively. However, attempting to resolve this situation would require altering the boundaries of several federal ridings and crossing the Humber River, a major natural and historic current ward boundary. This contradicts the purpose of making federal riding boundaries and ward boundaries consistent."

Something that I haven't seen talked about is that the federal riding boundaries don't have to align with Toronto's municipal boundaries. It's entirely possible a federal riding is drawn that is only partly in Toronto. What then?

ErieHall said:
Something that I haven't seen talked about is that the federal riding boundaries don't have to align with Toronto's municipal boundaries. It's entirely possible a federal riding is drawn that is only partly in Toronto. What then?
Click to expand...

When we were at the 25 Ward map the City site said that certain parts of the "Toronto Federal Boundaries" had been excluded as they are outside Toronto so it appears to be the case already. Not sure what these areas are but they do seem to exist
K

Ford says he'll allow a "free vote," but I doubt any PC MPPs are going to be doing and lose their nomination for the next election.

mjl08 said:
Supposedly it's going to be a 'free vote.' Will there be 12 of 76 PC party minions willing to vote against their party?
Click to expand...