Really hoping that both of these two candidates win. Beth Levy and Brad Bradford are both urban planners by profession, and have lots of experience in municipal administration.
Click to expand...

Beth Levy has David Crombie's endorsement. She'd have a better chance under 47 wards (running in the "North Toronto" part of Eg-Law which has a very weak incumbent) but it's going to be very difficult for anyone to beat Mike Colle with 25 since he has represented the entirety of the ward.
Last edited: Sep 18, 2018
N

25 wards it is, apparently.

The Stay is granted.

The full decision is here:

The gist is that the judges felt the appeal had strong merit and the lower court erred.

The Stay is granted.

The full decision is here:

The gist is that the judges felt the appeal had strong merit and the lower court erred.

Good, I'm glad that's settled. Let's get on with it.

Fingers cross Mammo and Ford Jr. are both booted out of City Hall.
https://twitter.com/AdmiralBeez
Trending #BlockedInToronto on Twitter.
S

Admiral Beez said:
Good, I'm glad that's settled. Let's get on with it.

Fingers cross Mammo and Ford Jr. are both booted out of City Hall.
Click to expand...

It's only settled for this election and a large part of the judgment was that in lieu of the time it would take to hear the appeal, or another case based on other aspects of the Constitution, this was the most expedient outcome.

This is far from over. Ford has only stated "for now" for not using the Notwithstanding Clause. He intends to use it it often and at every opportunity. It's essential to set court precedented markers on that.

It appears from my read that the Clerk is being given extraordinary latitude to submit requests to the panel, the panel then granting what's within their remit.

No, it's settled permanently. I cannot see the Supreme Court granting leave to hear an appeal of this stay. Therefore, the 25 ward election will proceed. The original case, even if lost by the province on appeal, would be an empty victory for Ford's opponents, as such a decision will come long after the election, and there will be no appropriate remedy.

It is also certain that the province has the authority to unilaterally cut council in half - the only real issue was the constitutionality of the timing. There is no basis to challenge the province legislating a smaller council in respect of any future elections.
S

Ottawan said:
No, it's settled permanently. I cannot see the Supreme Court granting leave to hear an appeal of this stay.
Click to expand...

You should reread the details. You have a number of points mixed up.

The Court of Appeal’s decision to grant a stay of a lower court’s ruling striking down Bill 5 has thrown another wrench into the Oct. 22 election, one that the lawyer who initially sought legal action says could lead to a disputed vote.

In a unanimous decision released on Wednesday morning, a three-judge panel ruled in favour of setting aside Superior Court Justice Edward Belobaba’s Sept. 10 ruling, which had deemed the government’s council-cutting Bill 5 unconstitutional. The appeal court referred to Belobaba’s decision as “dubious.”

The appeal court’s ruling however, does not overturn the initial ruling. It only sets it aside pending an appeal, which could be held as early as November.

Speaking with CP24 after the decision was released, lawyer Rocco Achampong conceded that the election will go ahead using a 25-ward model. But he said that the possibility now exists for the result of the vote to be disputed and potentially overturned, if the initial ruling is eventually upheld.

“It is far from over. The ruling at the lower court has not had a full appeal. This motion for a stay is to suspend a ruling until we have a full appeal,” he said. “The prospect of success still exists for the applicants so there is a situation that could be created where we have a 25-ward election, Justice Belobaba’s ruling is upheld and we revert back to a 47-ward election, effectively invalidating the election that will be held on Oct. 22.”

The government argued that the stay was necessary to provide certainty for voters, but Achampong noted that it may just have “prolonged the lifeline of this controversy.”

He said that it is now possible that a vote could be held on Oct. 22, only to be overturned at a later date. In that scenario, he said it is theoretically possible that Torontonians would have to go back to the polls in November or December.

In their written the decision, the three judges who heard the request for the stay said that there is a “strong likelihood that application judge erred in law” and the appeal of the lower court’s ruling will be successful.

Achampong, who was registered as a candidate in the 47-ward election, said that it will be “very difficult” to persuade another three-judge panel that those who issued the stay were “collectively wrong”

With that in mind, he said that it may be “time to perhaps see the election through” and to “move on for now.” But he said that he nonetheless has real questions over the legitimacy of the Oct. 22 vote.

“This election in my opinion is controverted and I think there will be a class action to invalidate it all,” he said.

The current term of council expires at midnight on Nov. 30.
Click to expand...

What this story doesn't mention is a new petition to the Ontario Superior Court for a case under other sections of the Charter, ones alluded to by the Court of Appeal judgment, and others. It's my understanding that some cases are being prepared as I type.

This is far from over...

Btw: It appears that the Court of Appeal made an error in one aspect of their ruling: 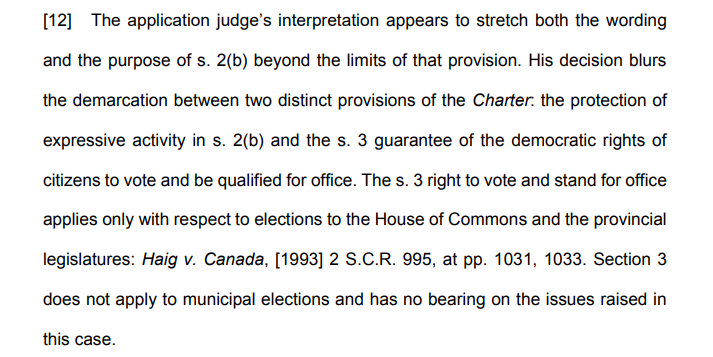 That's going to be revisited as subsequent rulings and interpretations since that was established have decided otherwise. It will be discussed in the press, some of it at length, and the basis of (a) new case(s).

Nuff said for now, others far more adept and familiar with constitutional law will make the argument in due time.

Even this ("it is far from over") is very discouraging:

King of Kensington said:
Even this ("it is far from over") is very discouraging:

"Discouraging"? What's discouraging is a mechanic with only half a brain who couldn't finish high-school deciding to service an engine on a plane in mid-flight, and then wonder what all the fuss is about...

Fletcher said on CP24 she will be running against friend and fellow NDPer Mary Fragedakis in Toronto Danforth.
A

Is it confirmed that Mihevc and Matlow are running against each other? Matlow should move north.

mjl08 said:
Fletcher said on CP24 she will be running against friend and fellow NDPer Mary Fragedakis in Toronto Danforth.
Click to expand...

Has Fragedakis also announced she’s running against Fletcher? We got a call from her campaign last night, according to screen display, but couldn’t be bothered to pick up. In retrospect, I ought to have.

steveintoronto said:
You should reread the details. You have a number of points mixed up.

It's possible for lawyers to have different opinions. I disagree with the one expressed by Ampachong in this article. Even if he is successful on appeal, I do not see the Court of Appeal providing for a subsequent 47 ward election as a remedy. One can win on the merits and get a worthless remedy: that is the situation opponents of Doug Ford are now in, and is why I say this is over. I am confident events will bear this out. I am not saying I am happy about that, just what I expect to happen.

Avenue said:
Is it confirmed that Mihevc and Matlow are running against each other? Matlow should move north.
Click to expand...

Received an email from her a few hours ago which suggested that she was still in the race.

As someone with deep NDP connections, there is a lot of concern among the Toronto Danforth party faithful that Frag and Fletch will 'split' the progressive vote. At this point, I think Fletcher has the slight advantage, with a bigger volunteer pool and more name recognition than Frag or the other candidates like Lanrick Bennett.
A

I don't know if this is legit but it appears Fletcher might have crossed the floor to join Tory's subjects and keep her seat? It'll be interesting to watch.

From the City of Toronto election website, at this link:

On September 19, 2018, the Court of Appeal for Ontario stayed the Superior Court of Justice decision of September 10, 2018 and as a result reinstated Bill 5 – Better Local Government Act, 2018 requiring the October 22, 2018 election to proceed on the basis of 25 wards.

The City Clerk is awaiting a second order from the Court of Appeal for Ontario to provide additional direction to conduct the election, including dates for re-opening nominations and other matters.