Or you do what my parents do and drive to Highland Farms on Dufferin between Finch and Steeles.
Twitter: https://twitter.com/edwardskira
FaceBook: https://www.facebook.com/edward.skira
Instagram: https://instagram.com/edwardskira/
Linkedin: https://ca.linkedin.com/in/edwardskira

Cheaper is relative to the product being purchased. The grass-fed and pastured meats at Whole Foods are not the same product as the CAFO feed-lot product you get at most grocery stores. Savvy consumers are aware of the differences, and will shop accordingly. I think Loblaws at Empress has already started courting this market demographic, with the Blue Goose line they have recently introduced. I don't think Metro cares one way or the other. I hardly ever visit their Church location due to an experience with a rude employee and a general lack of quality in their meat products.

For cheap grocery, there's a Price Chopper at Bathurst and Steeles.

At the other end of the spectrum,.... there's a Pusateri's at Bayview Village.

Strange thing about Bayview Village: when TTC put in the Bayview Station entrance at north-east corner of Sheppard & Bayview - you know the one, where you have to go down the steep hill to get to Bayview Village or climb up that hill from Bayview Village to get to the TTC entrance. Well, there was an option for Bayview Village to have a more accessible TTC entrance closer to their parking lot - better for pedestrians. TTC practically offered it for free! But owners of Bayview Village rejected it because they didn't want "those type of people" (ie: TTC customers, pedestrians and cyclist) at Bayview Village! Heck, they won't even put in paved stairs on the hill at that corner of their property,... instead there's warning signs for pedestrians to keep off that hill.
Where High-Density Development Are In GTA & Who Lives There: http://neoformix.com/Projects/DotMaps/TorontoVisMin.html
Interactive Commuting (Drive, Transit, Cycle, Walk) Mode Share By Census Tract: http://www3.thestar.com/static/googlemaps/100105_bikes.html 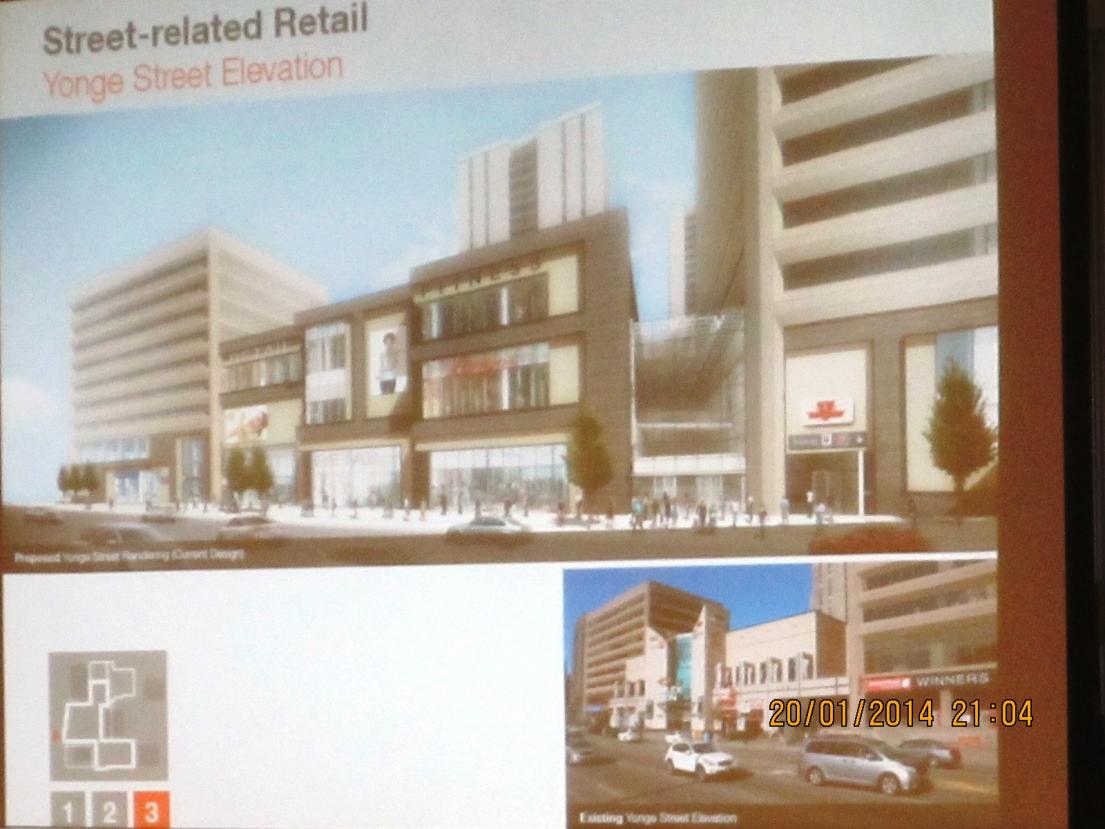 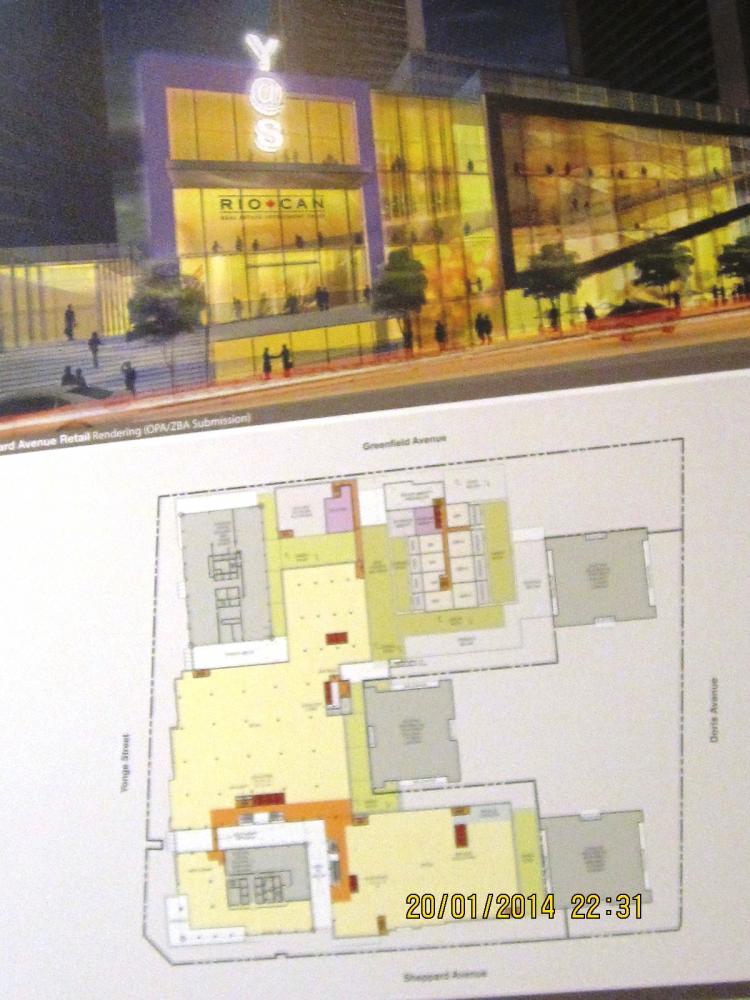 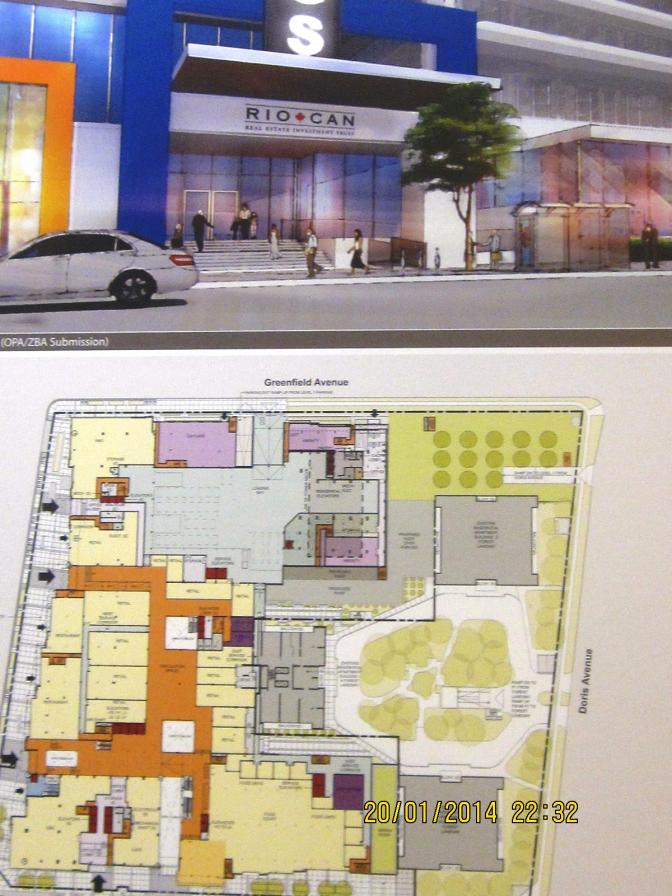 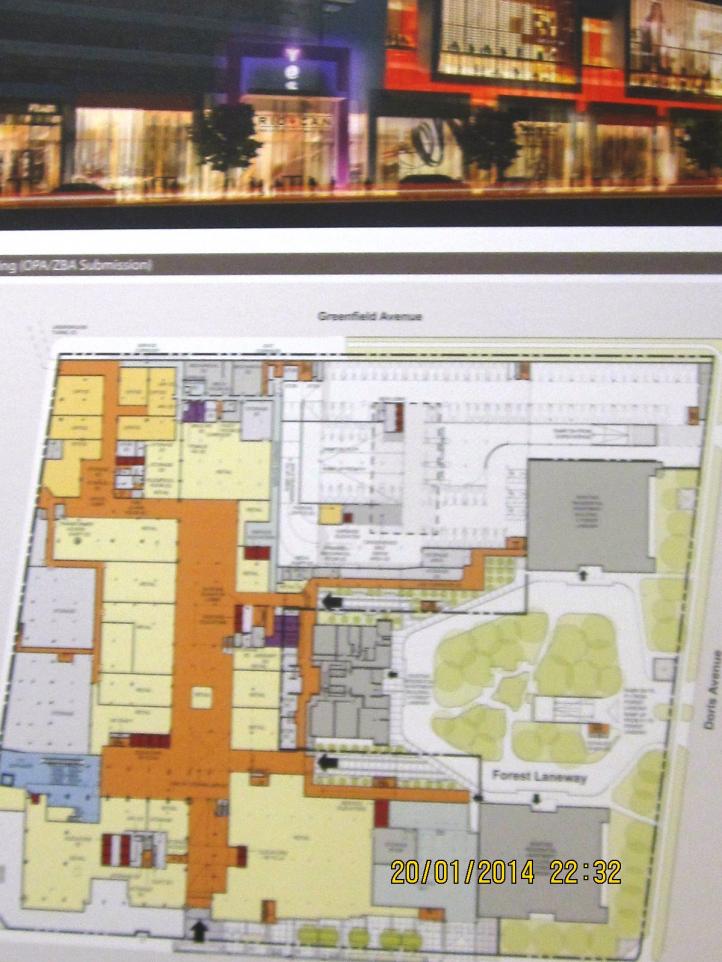 Apparently back in November when developer met with city; city planning requested RioCan to make a number of changes to their proposed Sheppard Centre retail renovation. Many of which centred around integrating pedestrian traffic outside on Yonge & Sheppard, with TTC entrance and within the mall.

The current TTC subway entrance/exit at Sheppard Centre is rediculous - while both subway line are below Yonge Street and Sheppard Avenue, to use the Sheppard Centre TTC entrance/exit, TTC customers must walk over 100 feet east deep into the moat or mall - and then do a 180 degree U-turn to walk back west towards the TTC entrance & Yonge Street. This applies to all 3 levels: moat/lower concourse level, street level, and upper concourse level. The city requested esculators-stairs parallel to Yonge Street.

Newer "glassy" retail proposal from RioCan attached (2nd); city prefer the "glassy" option as it adds more sunlight into retail space and integrate better with Yonge & Sheppard,.... but it seems to still be a work in progress.

This is at the Design Review Panel right now. The exteriors have changed entirely. A 50,000 square foot Longo's on the third floor (current closed Cineplex area) and a 50,000 square foot LA Fitness above it are what they are working towards (but I would assume not signed yet, based on the wording in the presentation). Much more light in the renovated mall space, which looks much better. No more moats thank goodness.

interchange42 said:
This is at the Design Review Panel right now. The exteriors have changed entirely. A 50,000 square foot Longo's on the third floor (current closed Cineplex area) and a 50,000 square foot LA Fitness above it are what they are working towards (but I would assume not signed yet, based on the wording in the presentation). Much more light in the renovated mall space, which looks much better. No more moats thank goodness.

Not sure if there'd be pictures in the minutes, but here's the link to the city's website of the panel meetings (April 14, 2014).

The minutes won't be out for another month, and you'll likely only get one or two small images when they come out.

Suiseiseki said:
Actually Boston Pizza is still in one of the pictures (under the LA Fitness sign)
Click to expand...

The pictures were updated some time between now and 4 months ago. I guess BP complained! lol So does the 3 existing apartment buildings at SheppardCentre.

That new rendering of the 39 storey condo is quite a bit different than their original rendering (see post 52 on page 4 of this thread) attached.

This new rendering reminds me of 44 Charles Street West,... that large cement block apartment building at Maunlife Centre (southeast corner of Bloor & Bay) built in the 1970s. SheppardCentre is starting to be more like ManulifeCentre except the retail isn't as upscale, nor the existing apartment buildings, nor the office tenants - interestingly they both have BMO backoffice IT departments.