What is that in the middle tho? An elevator shaft?
R

I didn't even realize! I guess im just used to the mess. It is only in this one little area though I think


DatTranzitGuy said:
What is that in the middle tho? An elevator shaft?
Click to expand...

Just a display case I believe.

Don't get your hopes up. This is the ONLY part of the ceiling on that level of Union to be painted. Though today they are putting up the drywall outside the new stairs going to Bay Concourse - if I had not been proved too optimistic before, I would suggest they may be planning to paint the old and the new at the same time!

Today they are putting up doors between the Bay Moat and the Front St East moat. Of course, they are temporary ones! (One might wonder why they would not install the permanent ones now but I suppose someone needed to order them .....)
M

reteequa said:
I didn't even realize! I guess im just used to the mess. It is only in this one little area though I think


Just a display case I believe.
Click to expand...

It is a display case. The back has not been installed so we're seeing through it. In front of this are storage rooms.
M

Central portion of moat is currently closed off.
M West moat looking towards new University Ave entrance. In the future this will connect to the central moat and TTC Union. Inside new University Ave entrance. Not much to see yet, all opening are still hoarded. New east entrance from West moat at York street. Past the Union Chicken is the York Concourse as well as new access (at right of image) to the food court below. Directly straight on where the stone walls are darker, is the original portion of Union below the Great Hall...I believe it's now called the "Front Street Promenade" basically where the original front street entrance that ramps up to street level.

On a side note, for those complaining about the state of the original ceilings....they do you bad, but they are plaster, which requires significantly more work to remediate than a simple coat of paint.

New portions looks good, the original portion feels very dark, additional lighting would have been a good idea. Hopefully once remediated, and new paint applied, it will be brighter. All the way to the east, at the end of the "Front Street Promenade" looking into the new east Bay Concourse. At the top of the stairs into the Bay Concourse, still a lot of work beyond the hoarding. Central moat at TTC entrance, looking west towards the central moat still covered by hoarding.
Upper bridge at left of image feels much larger than it appears in the photos. Further east in moat at top of stair from previous image. Frames for new door installed. The original board formed concrete arches are stunning, happy to see they have been left exposed. A lot of stone finishing at grade and along walls, stairs etc still underway.
N Successful Proponent Selected for the Union Station Enhancement Project
November 10, 2020
TORONTO –Infrastructure Ontario (IO) and Metrolinx (MX) have selected ONTrack Alliance as the successful proponent to work collaboratively to advance design of the Union Station Enhancement Project.
The ONTrack Alliance team includes:
The selection of ONTrack Alliance is the result of an open, fair and competitive procurement process overseen by a third-party fairness advisor.
IO and MX expect to reach financial close in Fall 2021.
Visit here to learn more about the project.

It is odd and hopefully not a sign of how the "Alliance Model" (replaces P3) will stall the start of projects; this is the first IO Alliance Model project IIRC. I'd like to assume it's the result of GO Expansion still undergoing design and this project relying on some of those details being finalized.

Compare to this DBF tender which selected the winning team on Nov 2nd and expects to reach financial close before January.

Walked by Union just now and :

1. They are building a temporary enclosure over the open side of the Bay St Moat cover. I assume so that the guys can work in a heated area. It looked to me as if they are planning for civilians to walk directly beside Union (where the floor is done) so that they can finish the section of floor tiling that runs on the east side. We shall see..

2. Walking along platform 3 it appears they are painting the outside of the (original) metal pedestrian pathway that crosses Bay Street. It has been covered for well over a year so ought to be done. The section, of 4 windows, nearest Union is still NOT done but it has yet to be covered up and is, I assume, next.

3. They have (finally) put back the last of the three (heritage) lights that are on the two ramps below the ramp leading to the VIA concourse. . Not sure I like the 'light temperature' they are using for the bulbs but ...

4. The new ceiling outside (at top of) the new stairs to/from Bay Concourse below the VIA ramp is done. Of course, it's not yet painted - presumably so it won't clash with the unpainted ceilings in that area.
N

Last day for the old terminal, not surprisingly, is Dec 4th.

Key operational note: No platform is pre-assigned to any route, 1st come, 1st serve. As such those using buses will need to be reading the screen to see where to go! 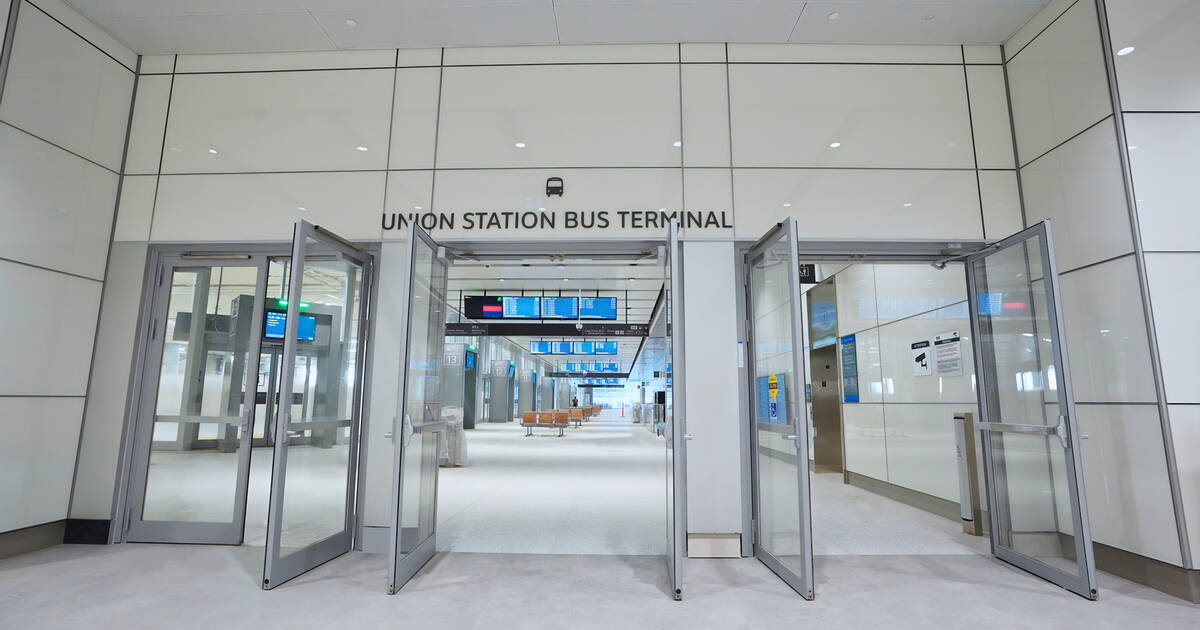 A complete overhaul of Toronto's key transit hub, Union Station, has been in the works for more than a decade now, and though residents may have go...