The problem with the Honest Ed's sign is that, despite appearances, it's not "hanging" on those walls and can be easily detached from them, it's actually wired in hundreds of places through the walls, and its structure depends upon the wall behind it. Early on when Mirvish announced that the store would be closing it was declared that there was about zero chance that the sign could be dismantled in a way that it could survive the demolition process. If all that is borne out, it could be replicated at Yonge Dundas Square… for a cost of course.

Moving the sign to Y-D Square is weird. There is no context for Honest Ed's there.

I dislike massive walls of glass, but I wonder if there is a opportunity here on the corner to incorporate into the design a lightly colored fritted glass "ghost" of the Honest Ed's sign.

It is truly a unique piece of Toronto culture and design and it would be a shame to lose it.
P

I don't really think an Honest Ed sign or the Sam the Record Man signs belong in YD square at all. I'd rather see them in a city museum.


Miscreant said:
More interestingly though, I was just saying to my partner the other day that the sidewalks in the Annex b/t Spadina and Bathrust seem to really have gotten busier in the last ten years. With this kind of density coming in, it'll be interesting to see how that fares. And perhaps more importantly, how the Metro just w. of Spadina fares, which I hear is the busiest Metro per square foot in all of Canada. I'm not sure that place can take more traffic.
Click to expand...

The Metro is definitely too small for the area now, even the sidewalks here are too narrow. Changes will need to be made to the infrastructure if more developments like Honest Ed's are built.

I lived in the area back in 1996 or so, and even then the Metro (then Dominion) was small and inadequate. The grocery business has evolve considerably since then, as has the area, so I can only imagine that the Metro (unless they've managed to completely reinvent it in that space) is even more inadequate than it was.

ksun said:
Personal attack and 5 petty "like"s aside, You guys simply can't accept the fact that this store is no different from a Walmart. Nothing about it is interesting to say the least.
Click to expand...

Honest Ed's is nothing like a Walmart. You obviously don't know much about the store and how it operates. Your whole attitude, I don't use it = it has no value, is something I would expect from Ford Nation. Anyway, you only speak for yourself and not the entire city. I know many people who value Honest Ed's very much and many of them are tourists and family members who always plan a trip there when visiting Toronto. I realize it's days are numbered, so discussing it here isn't going to change a thing but the fact that you consider its value, that of a Walmart, (or lower) is just irritating.

Walmart has no appeal to me and nothing I want, Honest Ed's does.

So, @ksun, if you haven't figured it out already, you invite the ad hominem attacks by the way you present your opinions. The moderators would prefer in the future that you presented your opinions in a way that invited discussion, in other words, with some allowance that others may value things that you don't.

That said, let's move on please!

P23 said:
I don't really think an Honest Ed sign or the Sam the Record Man signs belong in YD square at all. I'd rather see them in a city museum.

The Metro is definitely too small for the area now, even the sidewalks here are too narrow. Changes will need to be made to the infrastructure if more developments like Honest Ed's are built.
Click to expand...

Yeah, well, it'll be interesting to see what those changes might be, and if they take place. I don't see the sidewalks getting wider for instance, especially with the Bloor bike lanes reportedly coming in and this stretch of Bloor being a strict four lane road. Maybe they'd reduce the number of lines, but I doubt it.

But more on topic--as others have mentioned, I'm really interesting to see how this development impacts that stretch of Markham south of Bloor. It's a special little place; I'd hate to see it radically changed.
S

I love Honest Ed's. It's really a throwback to a different era.

Hopefully they can integrate a replica sign into the project.
M

Everybody has their own opinion. I personally would prefer not to see that sign forced into the design for the new buildings.

Agreed. Context is everything. Keeping the sign up at a random spot is devoid of meaning.

Yesterday night I went to the Spacing launch party, held at the Markham House. There was the scaled model of the Honest Ed redevelopment, boards, and people to answer questions about this project. I don't know if this info has already been posted here, but I was told that the entire thing would be built at once. All the buildings, although independent, will share the same basement, and since it's all rental, no need to phase construction. It would apparently take 3 to 4 years to complete, and this will certainly be quite an impressive thing to watch! I was also told that the developer will submit a revised version of the project sometime this month or early next month, so we might get new renderings soon, I imagine? 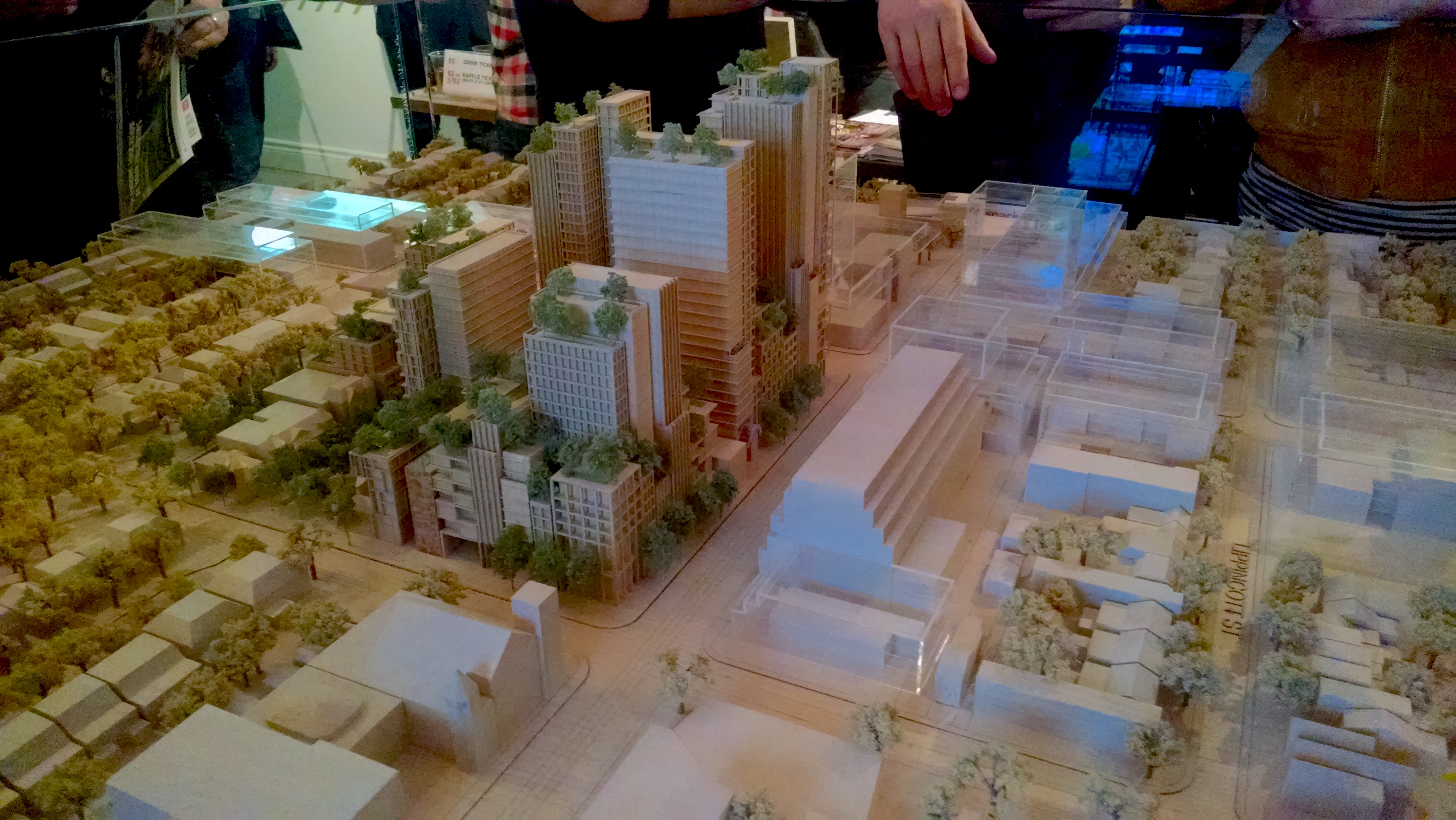 Also, the scaled model featured transparent boxes to illustrate what could become of the surroundings in a few years. No lots have been assembled, but the Bloor and Bathurst intersection will probably be unrecognizable in a decade or so.

I'm all for greenery, but those rooftop trees are very distracting and unnecessary.

Froggy said:
Also, the scaled model featured transparent boxes to illustrate what could become of the surroundings in a few years. No lots have been assembled, but the Bloor and Bathurst intersection will probably be unrecognizable in a decade or so.
Click to expand...

I was there too. The transparent boxes covered Bathurst Station, the Bloor Cinema, and every commercial building on Bloor Street. I know they're just to show potential "Avenues" massing, but some buildings, like the Bloor, should be sacrosanct.

ShonTron said:
I was there too. The transparent boxes covered Bathurst Station, the Bloor Cinema, and every commercial building on Bloor Street. I know they're just to show potential "Avenues" massing, but some buildings, like the Bloor, should be sacrosanct.
Click to expand...

Yes, a lot of the buildings in the area are actually worth preserving, IMO. A lot of them east of Bathurst are rather nice and give Bloor a lot of character.
Last edited: Feb 18, 2016

Those transparent boxes are hilarious. Honestly, developers are going to go to great expense to assemble properties of that size on Bloor and then apply for an extra 2 to 3 storeys over what exists today? Unlikely.

To the extent that the transparent boxes show area residents that change is coming, though, that's a good thing. But they seem to have been designed at a scale not to give people heart palpitations, rather than in any effort to be realistic.