Riseth said:
I'm happy with the way the diamonds end at the top. They fade off into the sky if that makes sense.
Click to expand...

That's a nice way to think about it! I'll try to think of it that way too. The weirdness and unexpectedness of the top may even make them more unique or iconic over time. This building is just amazing.

Lovestallthings said:
This building is just amazing.
Click to expand...

This would make a great landmark for visitors to the Scotiabank Arena.

Just find the diamond building and you are across Bay Street from the Scotiabank Arena.
T

Lovestallthings said:
This building is just amazing.
Click to expand...

ciceror said:
It would have been quite the sight if it was a hundred meters tallerView attachment 296976
Click to expand...

That would barely beat The One as Canada‘a tallest building if CIBC Square were a hundred metres taller.

The current height fits the skyline perfectly IMO. It both blends in and stands out at the same time.

This is the most striking the building has ever looked... to the point that it looks like a rendering where the actual building won't live up to the hype.
*****

Truly one of the prettiest buildings in the city, and we're getting a twin in a couple years. I love it.

TossYourJacket said:
Truly one of the prettiest buildings in the city, and we're getting a twin in a couple years. I love it.
Click to expand...

With a nice elevated park as the cherry on top!

Riseth said:
The current height fits the skyline perfectly IMO. It both blends in and stands out at the same time.
Click to expand...

For now that is. I suspect quite a few exposures of this gem will unfortunately be obstructed by new developments in the years to come.

An earlier version of the master plan did propose for a much taller phase II. 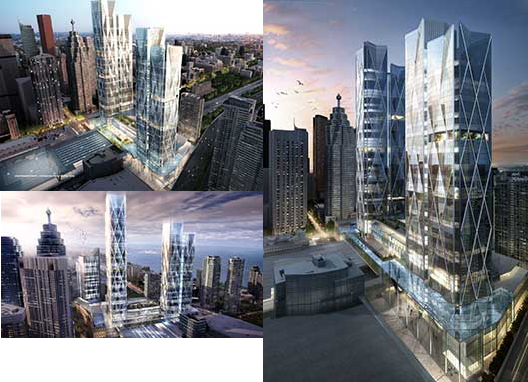 anyone know what kind of vegetation will be planted on the raildeck bridge? I Want to see some tall evergreens. We don't have much of them in the city Khaloody said:
anyone know what kind of vegetation will be planted on the raildeck bridge? I Want to see some tall evergreens. We don't have much of them in the city
Click to expand...

I can share; from the Docs: (below is the plant list specifically for the park/open space over the track) As to evergreens.........only 2 on the list, a single White Pine (native) is to be planted; and a single Dawn Redwood (native to China)


* none of the non-natives are known to be invasive here.

That deck is clearly meant to hold some serious weight; if happy; some of those trees could be huge.

They won't get any direct southern sun; but should get decent levels of sun from the east and west, and some, less direct sun from the south as well.

I note here, they spec'ed the White Pine as being 8M tall at time of planting (about 25 feet); that one will presumably be going in with a crane!

The landscape plan is below. * my only concern w/this on close inspection is that some of the soil volumes per tree are quite low.

This is partially offset by decent sized overall planting beds (shared soil); but for trees that can grow as large as these can, I still think the soil volumes are a bit light in places.
An environmentally conscientious, libertarian inclined, fiscally conservative, socialist.
N

Since ya got me looking, I also looked at the street level landscape plan.

That will be a crane job w/o a doubt. That's not so far off the height of the Gardiner itself there. In so far as they spec'ed 15M+ It's possible you'll see this tree from the Gardiner upon installation.

Expensive, and high-risk planting! (high risk because even in ideal planting conditions transplanting a tree that size often doesn't go well., and the replacement cost/effort.......yikes)