TTC: Other Items (catch all)

steveintoronto said:
Edit to Add: Museum, other than the ceiling (what's with the TTC's lack of awareness above?) is a very effective remake of one of the most sterile stations of theirs ever. The colours are warm, the concept of the sculptured columns brilliant. I wonder if outside financing helped with that?
Click to expand...

Toronto Community Foundation was the backer there. I don't know if they ever contemplated taking the new finishes above platform level (they should have), but its moot.

The original design called for an attractive new ceiling and light fixture arrangement over the platform. That was nixed due to budget. 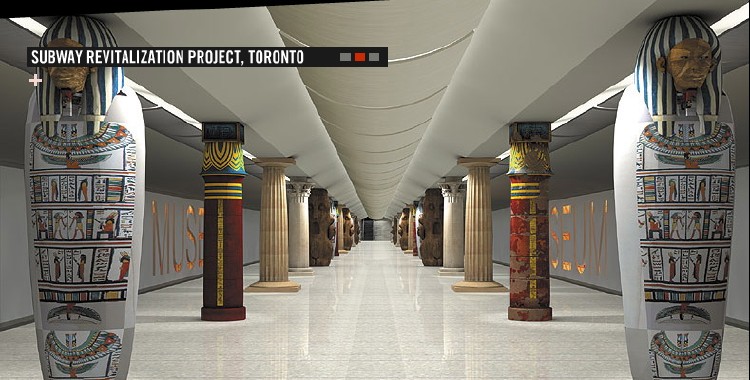 A real shame as it takes away from the design.

By contrast, this is what we got: 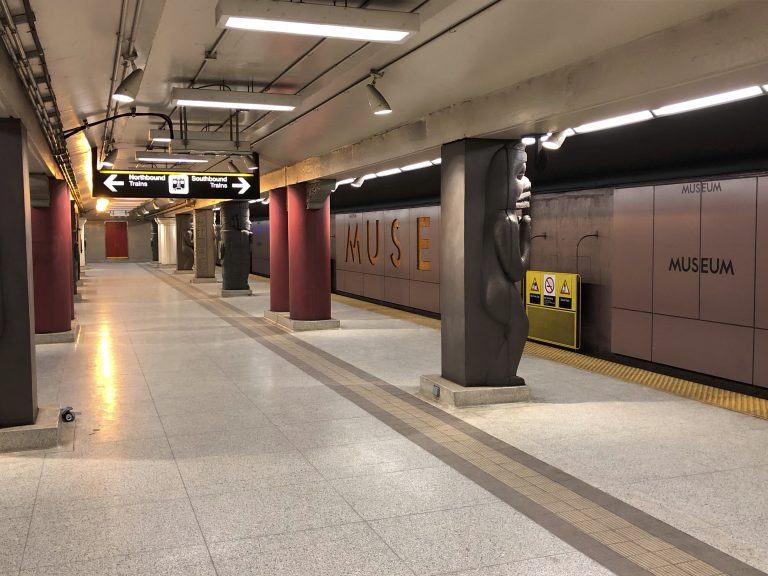 There was no intention that I'm aware of, to consider the over-track ceiling, which again mars the design, though not as much.

They also didn't change out the flooring at all.

It was nice as far as it went, but didn't go far enough.

Museum also has an elevator and second exit coming; would have made sense to tackle these together if at all possible.

Personally I would have loved to have seen the wall finishes and over-track ceilings match the Avenue Lobby for the museum.

You see the same Google failing in other cities - Seattle comes to mind, where they have two modern Toronto-like streetcar lines doing short local service both of which connect to their grade-separated Link light rail which does regional service - and both are called LRT.

Toronto's Line 3 (RT) and Vancouver's Skytrain however are shown as "Subway". Somehow though, they've managed in San Francisco to put in "Cable Car" lines. It seems a very California-centric implementation. Amusingly though San Francisco has 2 Toronto-like streetcar lines, which are shown as buses.

But someone somewhere will probably tell you that Google only ever gets Toronto wrong.
Last edited: Jan 13, 2019
S

The term light rail was coined in 1972 by the U.S. Urban Mass Transportation Administration (UMTA; the precursor to the Federal Transit Administration) to describe new streetcar transformations that were taking place in Europe and the United States. In Germany the term Stadtbahn (to be distinguished from S-Bahn, which stands for Stadtschnellbahn) was used to describe the concept, and many in UMTA wanted to adopt the direct translation, which is city rail (the Norwegian term, bybane, means the same). However, UMTA finally adopted the term light rail instead.[10] Light in this context is used in the sense of "intended for light loads and fast movement", rather than referring to physical weight. The infrastructure investment is also usually lighter than would be found for a heavy rail system.

It's only really in Toronto that the term "streetcar" is defined by track gauge, as streetcars are "light rail".

So, with the recent change with Roncesvalles handling all 512 Flexities, there has been a lot of Flexities switching between Lesile and Roncesvalles. If only TTC could have a consistent fleet of vehicles park for 512 at Roncesvalles, it's hard to tell which ones are there. Also, 4572 is among the Flexities on 501 today.
N

steveintoronto said:
It's only really in Toronto that the term "streetcar" is defined by track gauge, as streetcars are "light rail".
Click to expand...

The gauge is a red herring - moving a wheel one-inch is pretty minor - at least for the older cars. Toronto subway cars also use the same track gauge as the streetcars.

Taking Seattle as an example, again - they call different recent rail lines both streetcars and LRT similar to us - but they are both the same gauge as each other.


thettctransitfanatic said:
If only TTC could have a consistent fleet of vehicles park for 512 at Roncesvalles, it's hard to tell which ones are there.
Click to expand...

Why does it matter which ones are there? Surely best to have one maintenance facility. Do they even have a way to wash the new cars at Roncesvalles and Russell?

nfitz said:
Why does it matter which ones are there? Surely best to have one maintenance facility. Do they even have a way to wash the new cars at Roncesvalles and Russell?
Click to expand...

nfitz said:
they call different recent rail lines both streetcars and LRT similar to us - but they are both the same gauge as each other.
Click to expand...

steveintoronto said:
OK, is a Flexity a "streetcar" or an "LRV?"
Click to expand...

That's right. The only difference in terms is (vaguely) in the usage. But even there, the differentiation is ambiguous. As that relates to Google, it's a moot point.

steveintoronto said:
OK, is a Flexity a "streetcar" or an "LRV?"
Click to expand...

And Google marks it as such, not the usage.

(CLRV) Canadian Light Rail Vehicle, (ALRV) Articulated Light Rail Vehicle,
Due Time restriction, visit my site https://www.flickr.com/photos/drum118/ to see updated photos of projects shot the last few weeks since I don't have the time to post them to various threads.
See my videos on YouTube https://www.youtube.com/user/Transitdrum118

And Google marks it as such, not the usage.
Click to expand...

Google, as has been mentioned here and the off-topic TYSSE thread, yes for some goddamn reason marks streetcar stops as LRT stations.

Chicago's Garfield Green Line station is also open to the elements. Here's how it looked in 1996:

The CTA and the city announced Thursday that work has been completed on the Garfield Green Line stop, including the renovation of both the station used by customers and a historic station house, which will be used for community events.

The $43 million project included landscaping, public art, bigger platform canopies to protect against the weather, and elevator and escalator improvements, the CTA said.

“The newly remodeled Garfield Green Line station has created an iconic gateway to the Washington Park community and boosted the development that’s already occurring there,” Mayor Rahm Emanuel said in a statement.

The original Garfield station house is on the south side of Garfield Boulevard and is no longer used by CTA customers. One of the oldest public transit stations in the country, it was built in 1892 to carry riders to the World’s Columbian Exposition and has been restored to its original turn-of-the-century look, according to the CTA.

Called the Garfield Green Gateway project, the remodeling was partly funded with a $25 million federal grant and begun in the spring of last year.

As well as rehabbing the main station house and entrance to the station, the project included embellishing architectural features with new work by Chicago artist Nick Cave. This included the station’s mosaic ceiling and the exterior of the steel elevator towers.

Almost 475,000 passengers use the station every year. The CTA said that working with contractor Walsh Construction, it surpassed its goals for having a diverse workforce on the project, with a minority hiring level of 63 percent. The agency hired 21 percent of the project’s workforce from the surrounding neighborhood.

The CTA last month completed the rehabilitation of another historic station, the Loop’s Quincy stop on the Brown Line. That station now has elevators.
Click to expand...

Orginally built in 1892, it now has elevators. 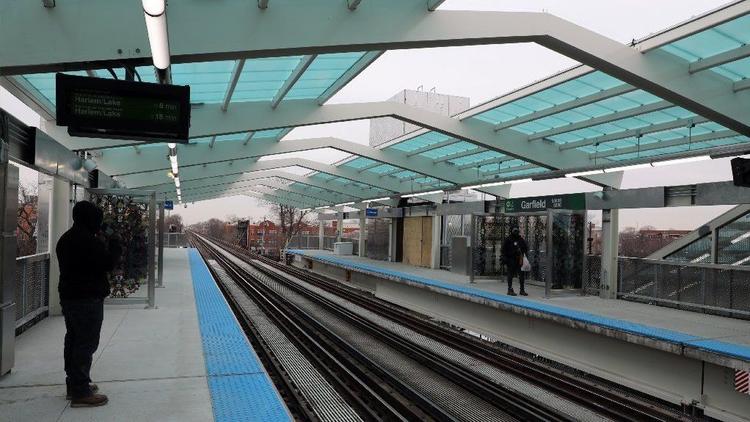