Steveve you rocked that update! You have Trump covered from all angles. I think that's a first, for one post in this thread! You had it from your grandma's place, from the ground up close and even from above! You rock!

Besides several different ground locations, you must have shot from two different buildings as well. Careful, Batman: you might comprimise your real identity!

if you look at some of my last shots (the ones showing the south end of trump), i *think* they've begun preparing to re-install the weather-wall on the south side. I really like the HUGE ceilings that are on the residential lobby levels, will we be seeing bigger panels for those levels?
Visualizing the future of Toronto's urban centres. On Twitter @FutureModelTO | Website​

Shot at 2010-08-27
"If you can keep your head about you when all about you are losing theirs, its just possible you haven't grasped the situation." - Rose Kennedy
"X" is a mathematical symbol expressing "unknown". Spert is a drip of fluid under pressure. Therefore, an Expert is an "Unknown drip under pressure".

Is it me?, or does it look like there's more activity around the area where the KPMG logo will go on the south side. ^^^

I can imagine the brightly lit logo will bug residences in/around that level.
Visualizing the future of Toronto's urban centres. On Twitter @FutureModelTO | Website​

steveve said:
I can imagine the brightly lit logo will bug residences in/around that level.
Click to expand...

Perhaps the purchasers would like to pretend that they're living in Los Angeles circa 2019.
C

Great photo updates steveve and Geekaroo. I liked the many photos of Trump from all of the different sides and the shots from high up looking down. That is a cool shot steveve of the FCP twin antennas casting a dark shadow on Scotia in the fifth pic. The Skylobby with the high ceilings is going to be a cool place. I am looking forward to seeing Trump rise faster in our skyline because construction progress will speed up now that they are going to start working on the residential floors.

Ramako said:
Perhaps the purchasers would like to pretend that they're living in Los Angeles circa 2019.
Click to expand...


Do the units come with a replicant? (A basic pleasure model, of course.)

Ramako said:
Perhaps the purchasers would like to pretend that they're living in Los Angeles circa 2019.
Click to expand...

Mongo said:
Do the units come with a replicant? (A basic pleasure model, of course.)
Click to expand...


The actual date mentioned for the future in Blade Runner is 2017. I believe the Wikipedia article is incorrect. But every site I see says 2019 so I must be wrong. But I clearly remember watching a "making of" documentary many years ago and was sure they said 2017.
Last edited: Aug 27, 2010

Trump is already hiring a management team for the hotel....from today's press release....

TORONTO--(Marketwire - August 27, 2010) - A seasoned team of hospitality industry veterans has joined the pre-opening effort for Trump International Hotel & Tower TorontoÂ®, whose 261 luxurious hotel rooms and suites are slated to open to downtown guests in early 2011. They join recently appointed General Manager Mickael Damelincourt at the 60-story tower, which will soar above the corner of Bay and Adelaide Streets as Canada's tallest residential building.

"We are extremely pleased to welcome three industry stars to the Trump Toronto team, each of whom offers a wealth of experience on the luxury hospitality industry and specifically the Toronto market," said Damelincourt, who was formerly executive assistant manager of Trump International Hotel & TowerÂ® Chicago. "I'm confident that we have assembled the finest executives possible to lead the hotel through opening and into successful operation."

Mary Ann Gamboa, CHSP, is the new director of sales & marketing, bringing 19 years of sales & management experience to her new role. She was previously director of sales and marketing for the Courtyard by Marriott Downtown Toronto -- the world's largest Courtyard -- where she led a team of nine professionals for three years. For two years prior, she held the same title at the Radisson Hotel Admiral Toronto-Harbourfront. Gamboa's rapid rise on the Ontario hotel scene also includes leading sales positions at the Deerhurst Resort in Huntsville and the Sandalwood Hotel & Suites in Mississauga. She began her career in her native Philippines, accumulating seven years of experience as a sales manager at various hotels, most recently The Holiday Inn Galleria Manila, before immigrating to Canada in 1998. A graduate of the University of the Philippines with a degree in tourism, Gamboa recently received the Certified Hospitality Sales Professional (CHSP) designation from the American Hotel & Lodging Educational Institute (AH&LEI).

Director of Finance Sebastian Morton Lightly joins the Trump team from Delta Hotels & Resorts, also in Toronto. From 2008 to 2010, he served as director of finance & accounting/real estate, overseeing the company's transition from Fairmont Hotels & Resorts' ownership. For three years prior, he was regional controller for Toronto's 1,590-room Delta Chelsea Hotel. Before joining Delta, Lightly served for six years with Le Meridien Hotels & Resorts, relocating to Toronto from London to assume the role of financial controller for Le Royal Meridien King Edward (2001-2005) after a year in the U.K. corporate office as assistant financial accountant. His early career also includes roles at Brown's Hotel, Raffles and The Strand Palace Hotel, Forte, both in London. Lightly holds an ACMA designation through the Chartered Institute of Management Accounts (CIMA), as well as a B.A. (hons) in hospitality management from Bournemouth University and a national diploma in hotel, catering and institutional operations from York College of Arts & Technology in the U.K. He is active in the Toronto branch of CIMA.

Joining the future Trump hotel as director of human resources is Pete Kangalee. He previously served the same role at the Hyatt Regency Toronto as a member of the executive opening team brought on in 2008 to transition the former Holiday Inn to the Hyatt brand. Kangalee's tenure at the Hyatt Regency Toronto culminated a 10-year career with Hyatt, including two years as director of human resources of the Hyatt Regency Calgary and, earlier, assistant director positions with Hyatt Regency hotels in Chicago, Columbus, Ohio and Vancouver. In 2005, he was named Manager of the Year for the Hyatt Regency Columbus. A graduate of Simon Fraser University in British Columbia with a bachelor's degree in economics, Kangalee also brings to his role 10 years of operations management experience, including five years as area operations manager for Western Inventory Service in Burnaby, British Columbia.

Trump International Hotel & Tower Toronto, to be located in the heart of Toronto's financial district, will hold the title of Canada's tallest residential building at 60 stories. Its stone, steel and glass faÃ§ade will serve as a beacon on the Toronto skyline, and will be crowned by an articulated spire. Staying true to Trump's reputation for providing the ultimate travel experience, guests will enjoy 261 luxurious rooms and suites boasting spectacular views of Lake Ontario, world-class dining including an exquisite five-star restaurant on the 30th floor with spectacular views of the surrounding city, The Spa at TrumpÂ®, a state-of-the-art fitness center, and the signature services of the Trump AttachÃ©™. For more information, please visit www.trumptorontohotel.com.

And in the last shot, you can see the significant "jump" in the weatherwall as now the cladding will have to catch-up with the rest of the building. we should start seeing some more curved panels soon on the north side. 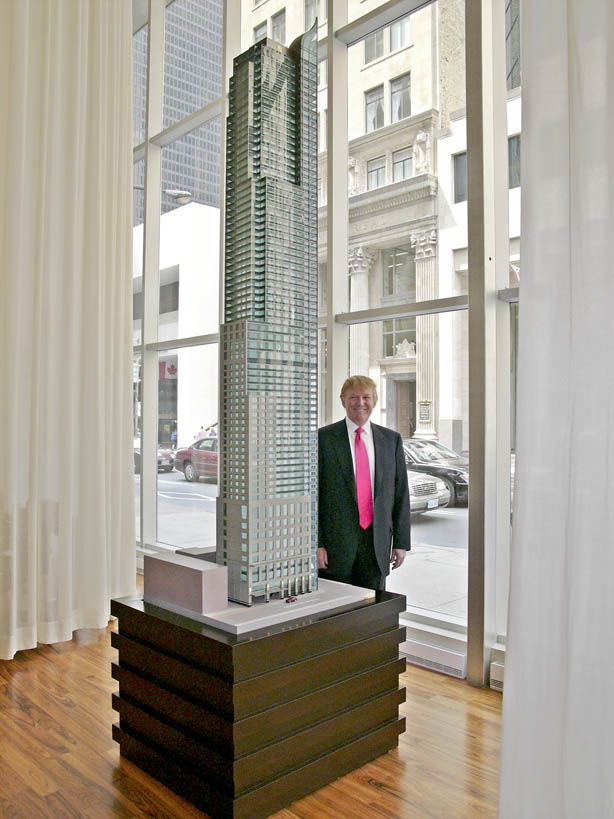 I am sorry to say but I am actually quite unimpressed with the exterior of this building. I was hoping it would improve as the tower progressed, but at this point it is rather ugly. It looks almost institutional. I hope those windows don’t open as I fear some of the multimillion dollar purchasers might try to use them once they see what they bought into.
Last edited: Aug 29, 2010
You must log in or register to post here.
Share:
Facebook Twitter Reddit Pinterest Tumblr WhatsApp Email Share Link