Coruscanti Cognoscente said:
If Mississauga separates, I have no doubt Peel would cease to exist. Brampton would be newly independent, and Caledon would probably join either Dufferin or Simcoe County. That said, I'm not sure if Mississauga will be allowed to separate. If it did, would Peel Police be split up too? Into a Mississsauga and Brampton police force? How would Peel Police assets be divided up?
Click to expand...

While I don't really see the need to break-up Peel at least until we figure out GTHA governance a little better, I suppose an argument could be made that once a GHTA city hits 400,000+ they could ask to be single-tier. Thereby Toronto and Hamilton (both already single-tier), could now be followed by Mississauga and Brampton.
Relief Line Facebook Group

The ceilings on that second level of the small expansion look extremely high...

I'm not getting the skylights. Weren't they supposed to be rounded?

BB ON said:
I'm not getting the skylights. Weren't they supposed to be rounded?
Click to expand...

Actually I don't think so.. This is a screen shot from their artist rendering video: 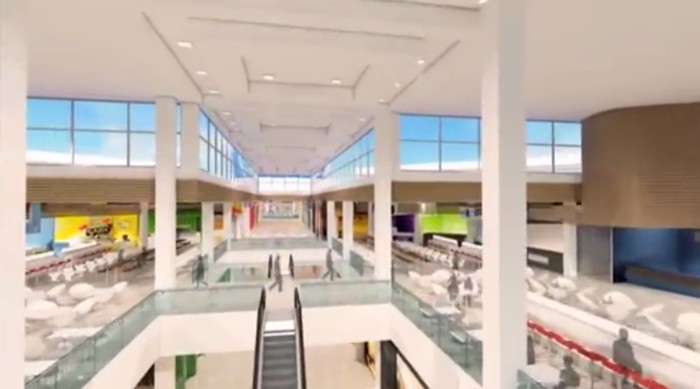 Thanks for the pics! From the initial renderings, the globe seemed promising but I think it will turn out lackluster. It'd be great if the clock tower could perhaps be reassembled somewhere else in Erin Mills as a monument. Maybe at a park or a public gathering space.

the clock is history

Thanks - it feels really weird seeing the interior courtyard like that.

Was in the mall for the first time in years this week to kill some time between meetings in the area.

The Bulk Barn was closing down for reno with 75% off sale. A number of other stores were closing their doors as well and the mall was going to be more dead with the stores already close.

The extension to the east is nothing to write home about and not having skylight anymore is going to make the mall very dull.

I am surprise this mall has latest as long as it has and some time in the future it most likely disappear.

The courtyard has been change a number of times around the tower, but will be the first without the tower. Not seeing the tower anymore is weir.

Until residential towers are built around the site and parking put underground for better land use, it will be a so so place.

I miss getting a shot from the west side as I was leaving, as I didn't have time to shoot it. No idea when I will have photos up as I am back log 2 weeks already of 2,000 photos to be uploaded, but don't have the time to do so.
Due Time restriction, visit my site https://www.flickr.com/photos/drum118/ to see updated photos of projects shot the last few weeks since I don't have the time to post them to various threads.
See my videos on YouTube https://www.youtube.com/user/Transitdrum118
P

Some new interesting photos from Broccolini's website, showing some new progress for the "enhanced skylights", progress on the food court addition, and an aerial view of the center court structure being built (which will hold the glass sphere in place).