freshcutgrass said:
What do you mean...the Atrium has probably suffered the worst blow. It used to feel like a street (a very well designed street), which was the entire point. Now it just feels like walking in any effing mall in Ontario. It's just a big empty feeling cavern with only individual store fronts standing out. That art installation running the length of the ceiling I'm sure is not even noticed by 1% of the public. CF should give lessons on how to spend big money ruining your assets and taking a chip out of the public realm.

It's better to demolish things, than leave them ruined for us to lament about. I'm waiting for them to continue pecking away at TD Centre. If anybody could manage to screw that up, it's CF.
Click to expand...

LOL. I see your point - I meant the roof of the Atrium has been left relatively unscathed.

But you are right - the top level - where Club Monaco is used to have amazing tree - it felt like you were walking outside. Most of those unique perks have been removed (I haven't been to Sherway in years - but I also remember each of their courts had different vegetation - a different gardnen - I suspect CF has removed those too).

That being said I don't mind the replacement floor that they've installed. However, I still think the desecration of the North Atrium has been, in my mind the saddest destruction of the Eaton Centre. There was a sense of place in that part of the mall that no longer exists. One of the perks of having corporations based in your home town is the legacy of their head offices (the Carlu, the Eaton Centre, the TD Centre); sure they were built for capitalist purposes, but there is also a desire to leave a legacy or mark. With the demise of Eaton's the Centre just became another mall in CF's portfolio... another 1M of square feet to monetize.

Let's not even start talking about First Canadian Place... I don't have the emotional constitution at the moment.
T

My god, that is so much nicer then what it is now. I forgot how nice it was. What a shame!

Even that is not original, as the TD branch has been added. The FPR (floating purple restaurant) was located in that spot.

Way back before the Cineplex was built, the mall continued west along Dundas below street level. There was even a sunken outdoor patio area, complete with fountains.

Doesn't that glass atrium still exist behind the media tower facing Dundas Square? What has changed? I've only been in the Eaton Centre about 3 or 4 times in my life, so I'm not very familiar with it.
W

One Nut Kruk said:
Doesn't that glass atrium still exist behind the media tower facing Dundas Square? What has changed? I've only been in the Eaton Centre about 3 or 4 times in my life, so I'm not very familiar with it.
Click to expand...

That's a different building, the "Atrium on Bay". What's pictured here is the southwest corner of Yonge & Dundas.
N

Although it wasn't exactly efficient in it's former layout, it had a real sense of arrival to it. Now, it's such a blatantly awkward node of a thing.
P

Wrenkin said:
That's a different building, the "Atrium on Bay". What's pictured here is the southwest corner of Yonge & Dundas.
Click to expand...

There is a media tower on the Eaton Centre property as well (which is what I believe One Nut Kruk is referring too).

One Nut Kruk - the atrium still exists, but its been greatly altered. The original design was a slopping atrium that went from the Eaton's down in a diagonal line to Yonge and Dundas. It was almost triangular in shape, when the H+M and Eaton Centre Media tower were built they changed the lines of the atrium. It also extend all the way to the corner, there was some public plaza space (that actually worked) on the South-West corner. 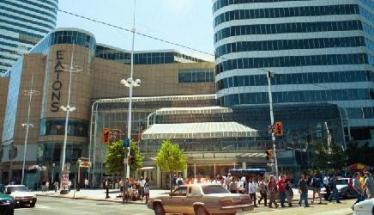 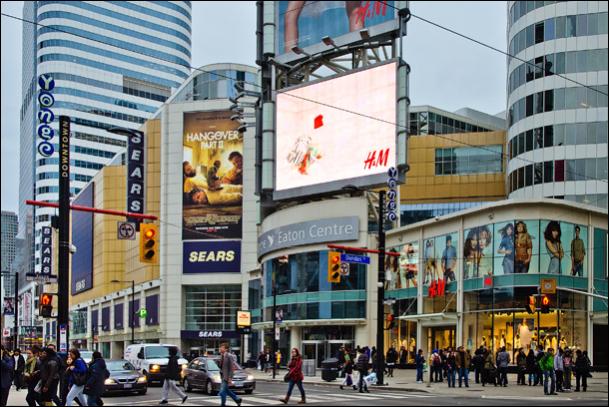 Wrenkin said:
That's a different building, the "Atrium on Bay". What's pictured here is the southwest corner of Yonge & Dundas.
Click to expand...

I'm not talking about the Atrium on Bay, but rather the glassed in portion that is shown above. At least part of it remains, but it's mostly hidden from the street behind the Eaton Centre media tower and H&M store.

What the heck is the point of that media tower? Why is it even necessary and what does it have to do with the mall? It would make more sense being across the street somewhere.
Last edited: Jan 26, 2014

CF doesn't own across the street, and the sign means $$$$.

Doesn't that glass atrium still exist behind the media tower facing Dundas Square? What has changed?
Click to expand...

The entire Zeidler-designed high-tech superstructure was removed. 90% of the open space of the grand atrium is filled in with rentable retail space. They installed an escalator going down to -1 in the new entrance area wedged between H&M and Sears. The round glass corner of the Eatons store was also replaced with a squared-off thingy.

It's a giant dog's breakfast of bits and pieces.

I see. I wonder why they replaced the round glass corner?

For the billboard and to allow for an additional headlining retail space. (which is H&M)
A

One Nut Kruk said:
What the heck is the point of that media tower? Why is it even necessary and what does it have to do with the mall? It would make more sense being across the street somewhere.
Click to expand...