Some news from the Twitterverse, courtesy @Allandale25

Cross-posted from the GTA West thread. 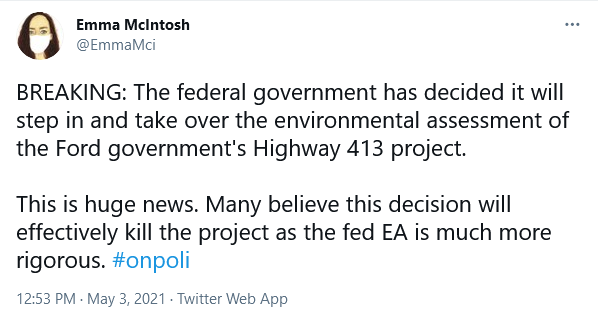 Crazy. Wonder what the real story is here. Hopefully it can open soon.
W

And here we thought the ford government was pro business...

Woodbridge_Heights said:
And here we thought the ford government was pro business...
Click to expand...

What does this have anything to do with being pro business? The contractor and the government have a dispute over... something... and we don't really know what that is. The only thing I heard is that the contractor messed up properly making water drainage, and apparently the road is so flat that literal puddles could be made during rain, which if that's true is a huge problem and the government has every right to seek litigation.
My Life for Aiur!
W

ARG1 said:
What does this have anything to do with being pro business? The contractor and the government have a dispute over... something... and we don't really know what that is. The only thing I heard is that the contractor messed up properly making water drainage, and apparently the road is so flat that literal puddles could be made during rain, which if that's true is a huge problem and the government has every right to seek litigation.
Click to expand...

innsertnamehere said:
All of those other than Syracuse are fairly useless stub highways that have no real utility already. Even Syracuse has a half decent alternative a 6-7 km to the east, which is fine considering the size of the city. It's not ideal for travelers looking to go from I-90 EB to I-81 SB.. but otherwise redirecting onto I-481 is not a problem at all.

Rochester was an extremely low use loop around the downtown that literally went nowhere. It made a ton of sense to demolish.

Detroit is planning to demolish a small stub of I-375 at it's southern end, which already ends in an arterial road along the waterfront. Similarly, it's underutilized for it's current 6 lane freeway cross section. Also makes a lot of sense.

Long Beach is another stub freeway that is duplicated by I-710 1.5km to the east, and it's demolition is being accommodated by replacing the Gerald Desmond Bridge, allowing higher capacities to flow onto I-710 once the 103 highway is demolished.

Houston is also planning to demolish part of I-45 around it's downtown, although only after completely reconstructing the other half of the loop as a 22 lane express-collector system to replace the lost capacity.

Montreal demolished A-10 as it similarly ended in downtown Montreal, and they moved the end back a few kilometres. No major loss to the key freeway network.

Freeway demolitions are not happening in the numbers you make them out to be. The ones that are share more similarities to the part of the Gardiner that was demolished in the early 2000's or the Allen Expressway than the Gardiner or 401.
Click to expand...

@Admiral Beez posted an article from today's New York Times suggesting the phenomenon is much larger than you seem to think. 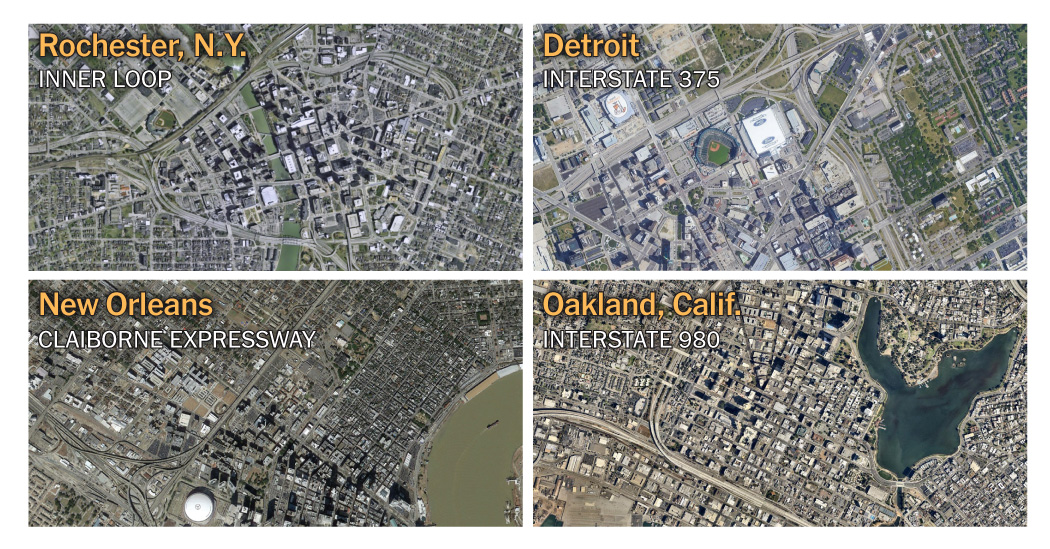 Big surprise that a town of 200,000 people with a declining population didn't need it's own freeway loop downtown.
N

darth_freeman said:
Big surprise that a town of 200,000 people with a declining population didn't need it's own freeway loop downtown.
Click to expand... 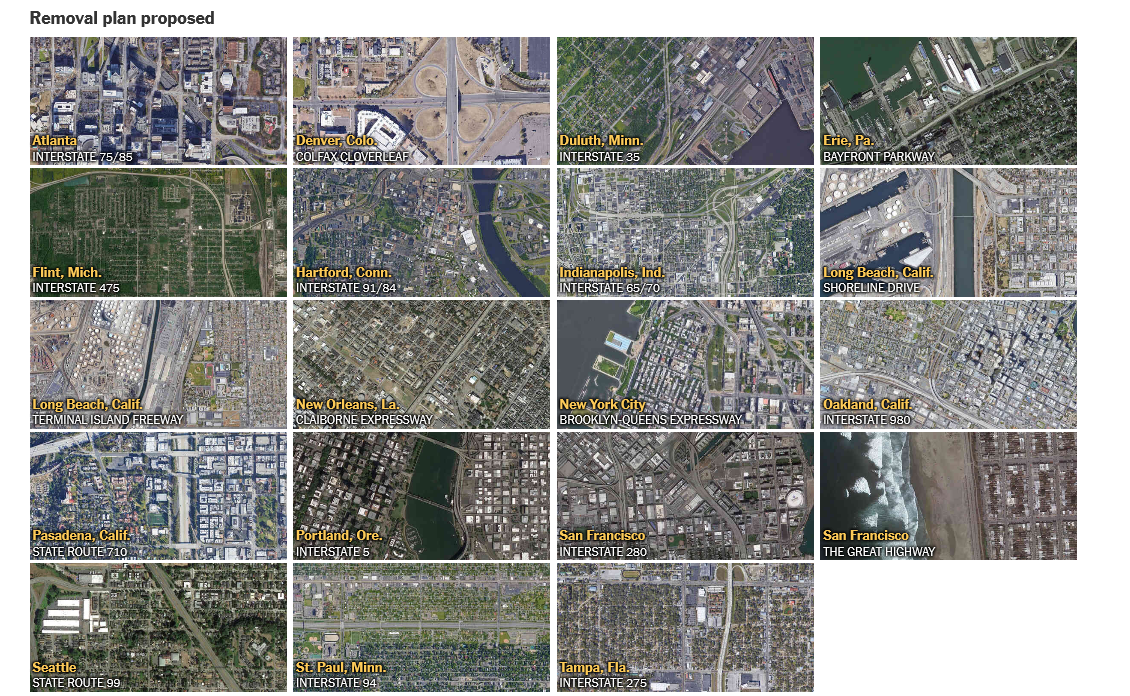 Northern Light said:
@Admiral Beez posted an article from today's New York Times suggesting the phenomenon is much larger than you seem to think.

The list is actually 14 that are officially under study, with the remaining 19 being only "proposed" by various lobbying groups.

"Under Study"
Arlington VA, Route 1 - stub highway running through an office district, an obvious removal. It's really only 1 interchange and an overpass, very small.
Austin TX, I-35 - This is being studied by TXDOT as a part of a widening study for I35. It is but one option of many, including widening the highway, the far more likely choice to be chosen. I would consider this extremely unlikely to actually be demolished.
Boston MA, Allston viaduct - this is an oversized off ramp that is overly complicated as it used to house toll booths before tolls were digitized. Not even a freeway, and makes complete sense to rebuild to a more rational size now that toll booths aren't needed.
Buffalo NY, Kensington Expressway - My understanding is that this isn't a super serious discussion yet, but the highway is a "stub" freeway into the downtown and doesn't have a huge amount of utility.
Buffalo NY, Scajaquada Expressway - This has already had several downgrades and features several at grade intersections and a whopping 30mph speed limit. It's really more of a large arterial road than a freeway. Similarly no serious discussions of actual demolition as far as I know.
Buffalo NY, Skyway - This is a stub expressway that runs to the south end of Buffalo and is severely overbuilt for the local traffic it serves. Happy to see it go.
Dallas TX, I375 - this is not a serious proposal supported by the government at all and as far as I can tell is simply a report prepared by lobbyists.
Kansas City MO - North Loop - Not sure why this is listed as planned at all. I see no official discussion on this one, only lobbying efforts.
Rochester NY - North Loop - stub highway with no purpose. Makes a lot of sense to remove.
Seattle WA, I-5 - Lol this is not a serious proposal and would never actually be demolished. Period.

Most of these so called "planned removals" are just local lobbying groups pushing to demolish key freeways in cities that would paralyze their economies and will never actually get off the ground (Demolish I-5 in Seattle? I-75 in Atlanta? LOL!). A good chunk of them aren't even actual freeway demolitions but are more so just interchange reconstructions or modifications to large arterial roads.
Last edited: May 27, 2021
D

Toronto already effectively removed its less useful highways by not building them 60 years ago. As a result, today we only have the bare minimum.

The only reason those articles are published is because they can highlight "racism" that happened 70 years ago.
S

Some of that is probably just the New York Times pandering to its audience.

Yes, there are some freeway removals happening in the US (and elsewhere). Those projects excite urbanists, so it would be in the best interest of a newspaper that is read by urbanists to write a story about it.

For the list of freeway removal proposals that were listed yesterday, most of them were located in rust belt areas where the infrastructure was built for cities with larger populations than they have today, so now that the time for infrastructure renewal has come around, they are looking at less expensive options.

The Buffalo Skyway is an obsolete piece of infrastructure that was built to solve a traffic problem that no longer exists, so its probably not shocking that it may not be replaced like for like. Despite the fact that removing the former Skyway constitutes an urbanists wet dream, that's not why it's being done. Same for Rochester.

But the Times article blatantly ignores the fact that in the US (and elsewhere), many areas are still building and widening urban freeways.

In LA, Metro is spending hundreds of millions of dollars to widen sections of Interstate 5 in southern Los Angeles County. This project is substantial and involved considerable property impacts, and construction is just wrapping up now. Obviously no one is talking about removing that freeway. And LA County has a particularly anti-freeway government. Metro is one of the more aggressive agencies in trying to divert trips onto their shiny new LRT cars.

Further to the north in Bakersfield, still in blue democratic California, a brand new urban freeway is being constructed as part of the west side highway extension, which could one day serve as an extension of Interstate 40.

Washington State (another blue democratic state) is currently in the planning process of extending its 167 Freeway through Suburban Tacoma. Amazingly, not mentioned in the Times article that lauds Portland for tearing down one of former three north-south freeways that were located within two square miles of each other.
D

The only highway I could see being removed is the Allen expressway. Except I'm sure the residents on the east side don't actually want that barrier removed so they can keep a buffer with the poorer areas west of it. Funny how that works.
N

darth_freeman said:
Toronto already effectively removed its less useful highways by not building them 60 years ago. As a result, today we only have the bare minimum.

The only reason those articles are published is because they can highlight "racism" that happened 70 years ago.
Click to expand...

The Allen is a completely useless highway; worse than that, its a complete negative.

It takes you from from the 401 to place on Eglinton where there is no 'there'.

It causes traffic jams; its unslightly and divides communities and the Beltline.

The Gardiner east of Jarvis is low utility and we are wasting gobs of money keeping at least the Jarvis to Cherry part standing for another few decades.

While the 400-series highways are useful, as is the Gardiner from downtown west; both serve as material barriers to communities accessing other areas.

I wouldn't suggest wholesale removal for those, though I would like to see narrowing, and new crossing points, and aesthetic and noise mitigation measures.