I see people blaming this on green energy and overpaid Hydro employees, others saying that's more to do with energy overproduction, playing catch-up with infrastructure, etc.

Is it really going to blunt Ontario's economic recovery or is it just industry hyperbole?

Soaring electricity rates in Ontario are threatening industries and businesses across the province, with one in 20 reporting they expect to shut down in the next five years, according to a major study by the Ontario Chamber of Commerce (OCC).

Businesses can’t grow, make improvements or investments or even hire new workers because of the increasing rates, which are among the highest in the country and expected to continue to rise over the next 20 years, says the report, Empowering Ontario: Constraining Costs & Staying Competitive in the Electricity Sector, released Wednesday.

It paints a grim picture of a convoluted, complicated electricity pricing system, and warns that to keep business in the province or attract new businesses, government and energy authorities must act now.

“Call it the canary in the mine,” says Allan O’Dette, president of the Ontario Chamber of Commerce, which represents 60,000 businesses employing more than two million people in the province. “We have just completed this Leger poll and when 81 per cent of Ontarians are concerned that rising electricity prices are going to impact the health of the economy, you’ve got to be paying attention to that.”

Premier Kathleen Wynne and her government have been on the defensive about electricity prices. There was a rate hike in May, which raised consumers’ hydro bills by nearly $6 a month. Ms. Wynne’s government also announced in its spring budget that it is selling 60 per cent of Hydro One to help pay for new transit and infrastructure. This has raised fears that private ownership will cause prices to go even higher.

His electricity costs are more than $110,000 a year – the second-largest cost after salaries. He calls the high electricity prices a “huge burden.”

He says the rates have “slowed our expansion.” “If we spent 50 per cent less, I would invest the $50,000 in new equipment, which would lead to new jobs,” he says. “We have already grown by 25 per cent a year every year over the last three years and could grow more if there were additional funds.”

To keep costs down, he says, they cook mostly with natural gas, but he still has to rely on electricity as the 15,000-square-foot plant is refrigerated.

“We also, as industrial consumers, don’t benefit from time-of-day usage, whereas, if you’re a consumer, you get that time-of-day usage,” he says. “I can switch some of my production to do things at nighttime but there is no advantage for me to do it.”

He wonders why he can’t take advantage of the lower costs.

In fact, the OCC report notes that medium-sized businesses are “bearing the brunt of costs” because, like Mr. Heaton’s business, they can’t take advantage of lower costs during those time periods.

“What we need to do is flatten the rising costs,” says OCC president Mr. O’Dette, who adds that there is “not much we can do at the moment to bend the cost curve on electricity rates.”

The chamber hopes to compel the government to start laying the groundwork for the future in order to keep Ontario competitive.

Increasing transparency about how electricity costs are calculated is the report’s main recommendation. Businesses don’t know how their rates were arrived at because many costs are not disclosed by the authorities. For example, the report says the Independent Electricity System Operator, which runs the system, “does not release average electricity prices nor does it conduct publicly available jurisdictional comparisons similar to that of Hydro-Québec.”

Lack of information reduces confidence in the system among consumers, the report says. It points out that governments cannot be held accountable without knowing the reasons behind increases.

According to the report, energy demand in the province dropped 8 per cent between 2003 and 2014 – but generation capacity has increased by 13 per cent. This means that Ontario has a huge surplus and so it gives away electricity. These costs of producing electricity and then basically exporting it for free are passed on to customers.

“Let’s help all the actors, including consumers, in this discussion and debate understand what it is in the pricing of electricity in this province,” Mr. O’Dette says.
Click to expand...

Epilogue- four years and one Liberal government later, similar parallels coming out of Germany? I can't but wonder if a promising field has been co-opted by existing consumerist forces eager to take advantage of people's 'eco-guilt', and pushed before it was really ready for mass adoption.

The Reason Renewables Can't Power Modern Civilization Is Because They Were Never Meant To
Click to expand...

Over the last decade, journalists have held up Germany’s renewables energy transition, the Energiewende, as an environmental model for the world.
Click to expand...

“The Energiewende — the biggest political project since reunification — threatens to fail,” write Der Spiegel’s Frank Dohmen, Alexander Jung, Stefan Schultz, Gerald Traufetter in their a 5,700-word investigative story (the article can be read in English here).
Click to expand...

Over the past five years alone, the Energiewende has cost Germany €32 billion ($36 billion) annually, and opposition to renewables is growing in the German countryside.

“The politicians fear citizen resistance” Der Spiegelreports. “There is hardly a wind energy project that is not fought.”
Click to expand...

Solar and wind advocates say cheaper solar panels and wind turbines will make the future growth in renewables cheaper than past growth but there are reasons to believe the opposite will be the case.

Between 2000 and 2019, Germany grew renewables from 7% to 35% of its electricity. And as much of Germany’s renewable electricity comes from biomass, which scientists view as polluting and environmentally degrading, as from solar.
Click to expand...

Of the 7,700 new kilometers of transmission lines needed, only 8% have been built, while large-scale electricity storage remains inefficient and expensive.

“A large part of the energy used is lost,” the reporters note of a much-hyped hydrogen gas project, “and the efficiency is below 40%… No viable business model can be developed from this.”

Meanwhile, the 20-year subsidies granted to wind, solar, and biogas since 2000 will start coming to an end next year. “The wind power boom is over,” Der Spiegel concludes.
Click to expand...

But then, starting around the year 2000, renewables started to gain a high-tech luster. Governments and private investors poured $2 trillion into solar and wind and related infrastructure, creating the impression that renewables were profitable aside from subsidies.
Click to expand...

Opposition to renewables comes from the country peoples that Heidegger idolized as more authentic and “grounded” than urbane cosmopolitan elites who fetishize their solar roofs and Teslas as signs of virtue.
Click to expand... 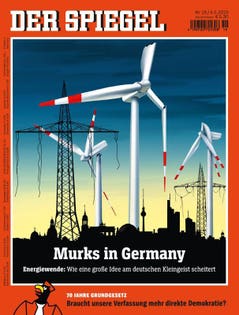 Germans believed that the billions they spent on renewables would redeem them. Many of them will insist that the renewables effort was merely “botched,” but it wasn't. The Energiewende was doomed to fail.
www.forbes.com
Last edited: May 7, 2019
T