Contactless payments (equivalent to cash) are more than presto card fares right? Personally, I want to see the ability to use Presto on my phone to tap if that's the case.
L

Coolibop said:
Contactless payments (equivalent to cash) are more than presto card fares right? Personally, I want to see the ability to use Presto on my phone to tap if that's the case.
Click to expand...

It's the same as a single adult fare on Presto on UP Express. For the closed GO trial it's also the same as Presto, but this may change once it's opened up to the general public.
C

Just looked up pilot in Durham isn't the same as Presto fare. It's more (cash fare). I guess they are targeting one time users or just for backup payments? I wonder if they charge more (cash) because of the transaction costs for interac/visa/mc/amex versus presto which only incur fees for reloads? I wound imagine they would have a bulk fee structure... Begs the question why even have presto once this in place.

Probably'll depend on the agency.

Though given the very small difference between cash fares and Presto on TTC these days, it barely makes a difference.

Report on this subject to next week's TTC meeting: 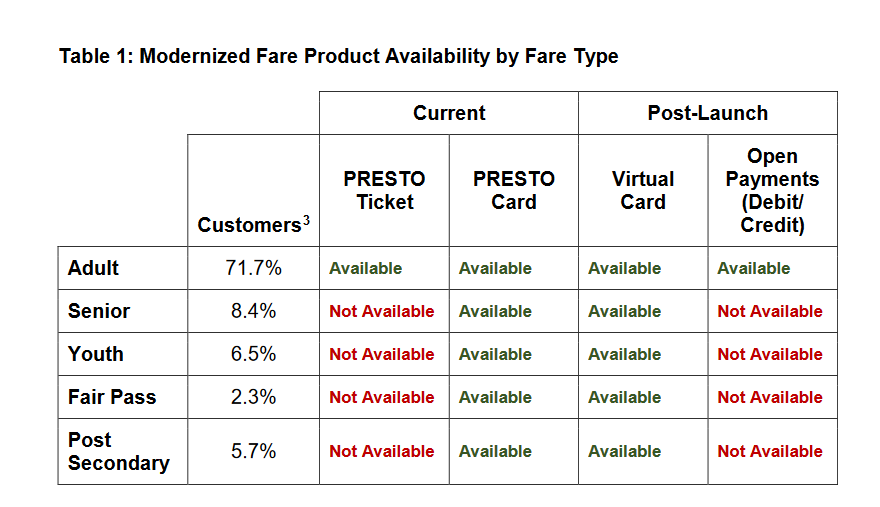 Why are Presto web services offline so frequently on late evenings? It's almost like there's a standing schedule that they automatically turn it off for every single Friday or Saturday night.
I am planning a TTC trip right now at 11:50 p.m. on Friday, and once again it's offline for maintenance. Why? Again? Both the website and the app pretend that telling me I can still load my card at a customer service kiosk is not helpful. I need to load it NOW to get on the streetcar outside my door. There are no GO stations I can walk to. Shopper's Drug Mart is closed. This should be so simple in 2022, but it's still agony. And, no, I don't want auto-load. I am an irregular rider, like many people riding at this time of night.

I'm guessing these people think public transit is only used at rush hour. Late night is a time where people really need to have that instant "load funds" option available through the app.

Also, I tried to take a screenshot of the app telling me this information but hilariously got the notice that the Presto app "doesn't allow screenshots", because of course it doesn't. Here's the website version. I see this screen far too often. Another example of Metrolinx still thinking they only serve 9-5 M-F commuters. 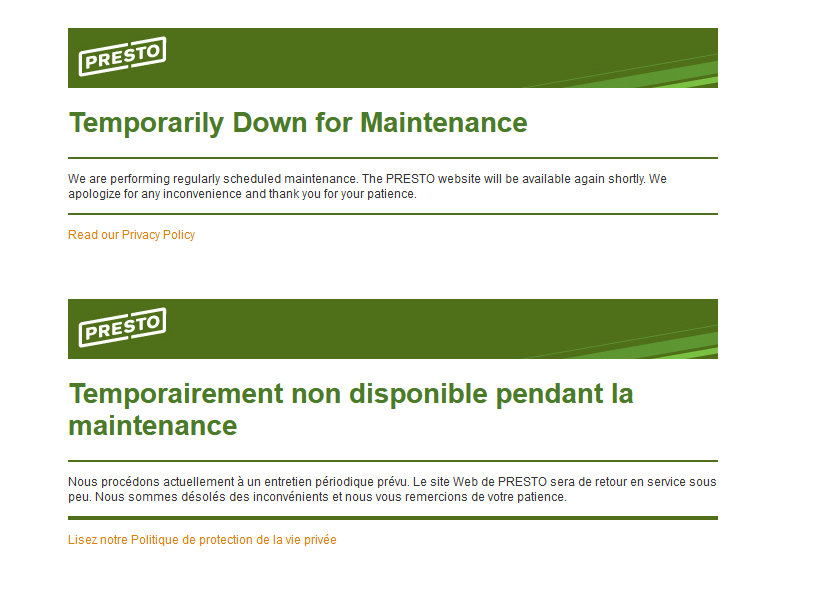 @Jonny5 I agree that's extremely frustrating! They may have announced it in advance, but that only helps if you open the app regularly.

I use Auto-load, but I'm on the TTC regularly. If you're not a frequent rider, I can see that you don't want to tie up money in a digital wallet.

I am still getting the update notice today (it was there last night when I wanted to check something). No issues with screenshot.

PinkLucy said:
I am still getting the update notice today (it was there last night when I wanted to check something). No issues with screenshot. View attachment 408325
Click to expand...

Likely out over the weekend.
P

Richard White said:
Likely out over the weekend.
Click to expand...

The site said "until Saturday afternoon".

My version of the app is Android; screenshot did not work.

My version of the app is Android; screenshot did not work.
Click to expand...

I’m on Apple. No timeline showing which isn’t very helpful.

they said on GO train that the presto app. will be upgraded and down for maintence over the weekend

The agency will continue to lead creative and strategy for the transit operator, as well as the Presto payment system.

Metrolinx has once again picked Leo Burnett Toronto as its agency of record.

Following a competitive RFP led by the Ontario government’s Advertising and Communication Services Procurement Branch, Leo Burnett was picked to lead strategy and creative for the Metrolinx brands, as well as the Presto Payment system. The agency’s focus will be on continuing to build both the Metrolinx and Presto brands and spread the message about the work it is doing to build its transit network.

Metrolinx is a government agency that manages provincial and inter-city public transit systems in Ontario’s Golden Horseshoe region. Those services include GO Transit and the UP Express.

Sharyn Byrne-Nearing, VP of brand, digital and product marketing at Metrolinx, says that Leo Burnett’s knowledge of Metrolinx’s business and “a unique consultancy approach to unlocking brand value” led to the renewal.

Leo Burnett’s work with Metrolinx began in 2018, and has included work that has attempted to reassure Toronto residents about the ongoing construction required to build its transit systems.
Click to expand...

slickpete83 said:
they said on GO train that the presto app. will be upgraded and down for maintence over the weekend
Click to expand...