Ghent has its own issues with cobblestones and tram tracks. Although as I mentioned to the local who warned me about the tracks, I’m from Toronto so I have a healthy respect for them.
M

I recently discovered this ground-level power system for streetcars in use in some places around the world. Wondering if stretches of King could use something similar? Only mention of snow in the Wiki is for an older version, so who knows how well more modern versions handle the weather. 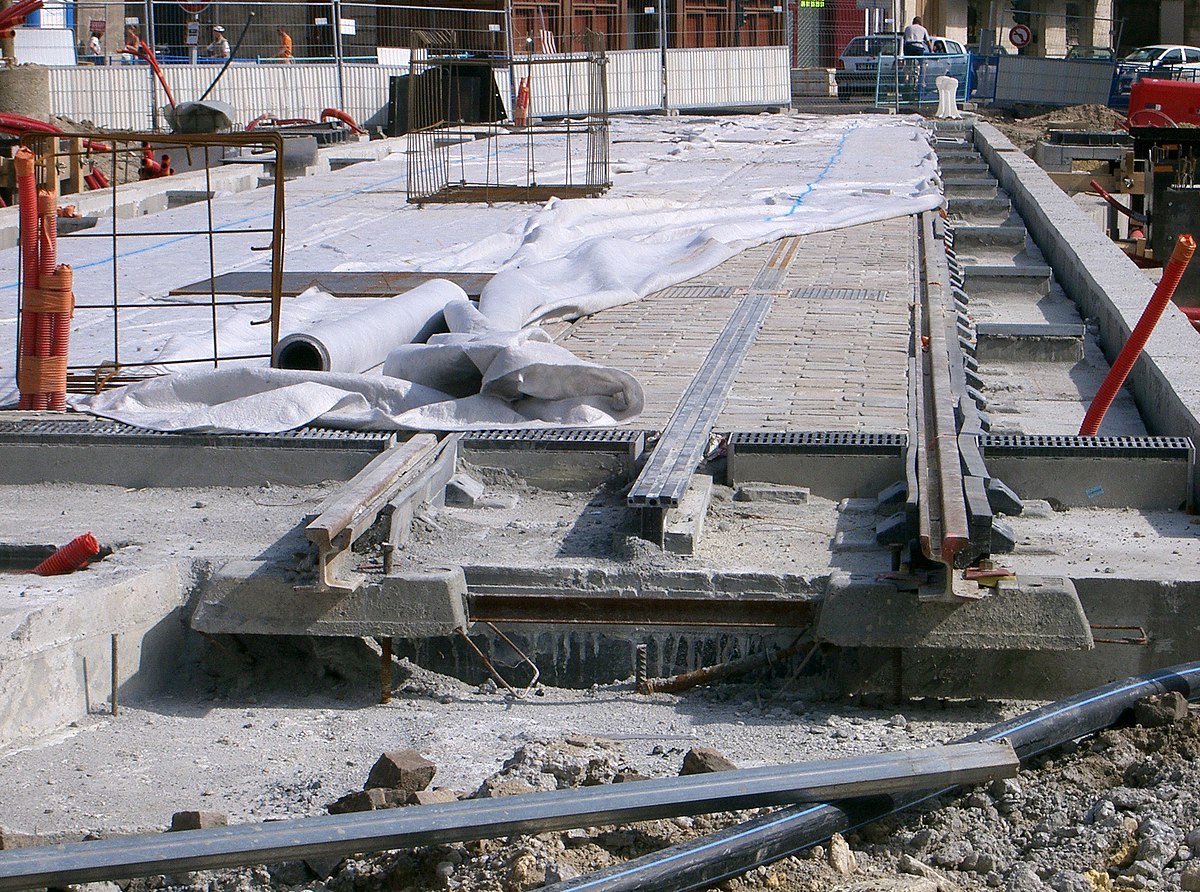 en.wikipedia.org
Perhaps when we order new streetcars, we order slightly longer versions with this system installed, for use exclusively on King? Install this during the 2023 rebuild? Pipe dream, probably, but what do you all think?

Winter would probably kill it, and if it were to work in winter, snowplows would definitely damage the shit out of them

Carrying on a point from the King Blue condo thread, when the King Street Pilot was voted on to become permanent, City staff pointed out that going forward, a new street layout would be followed when rebuilding sidewalks after utility work or when condo construction along the street was finished and the developer is made to rebuild the sidewalk.

King Blue is the first condo to be finished since then. Given that it's in front of a streetcar stop, it's to be expected that this would be the first sidewalk to be rebuilt according to the new standard sidewalk width and a concrete streetcar platform.

Hoarding for the project has been taken down and jersey barriers have been installed. 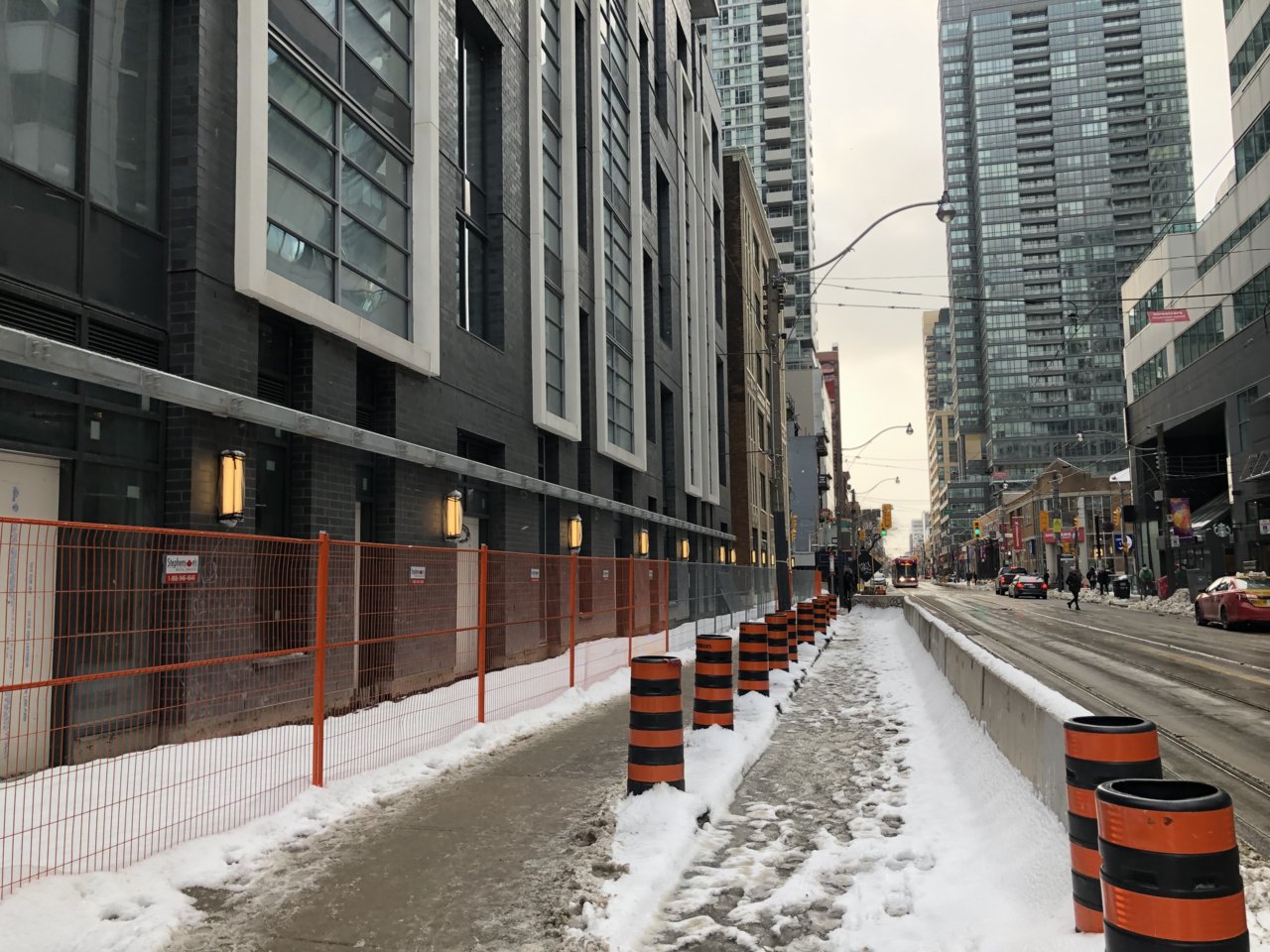 This can seen in two ways:

1. They're going to rebuild the sidewalk according to the existing width and are leaving a path for pedestrians. This would maintain the temporary nature of the King Street transit way, leaving a car lane where there should be a streetcar platform. I hope that I'm wrong but why would the city be building a car lane that cars aren't allowed to use and then putting in place temporary infrastructure to prevent them from using that new lane? Typical city bureaucracy and different departments not talking to each other?

2. In an alternative and more hopeful interpretation, why would they be adding jersey barriers just to rebuild the sidewalk? Might this be a more long term solution until 2023 when the entire street will be rebuilt?
Last edited: Jan 19, 2020

I didn't get a picture but there were arrows added to the jersey barriers. It looks like these will be here for the long run. It's disappointing that King is going to look like a militarized zone until 2023 when they rip up King to build the new street, and probably under construction for a couple of years after that. And if we get a Mayor farther right of John Tory, I don't think the King Street transit way will survive. That's why it's so critical to start building permanent, difficult to reverse infrastructure.

I think the taxi exemption needs to end and that traffic signals need to show only left and right arrows. Streetcars would get their signal from a white bar (transit signal).
Relief Line Facebook Group
M

JasonParis said:
I think the taxi exemption needs to end and that traffic signals need to show only left and right arrows. Streetcars would get their signal from a white bar (transit signal).
Click to expand...

This suggestion is repeated every few pages on this thread, and as always, someone - in this case me - needs to remind people that a green right arrow means that pedestrians are prohibited from crossing the street. With a green globe, cars can turn right but must yield to pedestrians with a walk signal; with a green right arrow, cars have absolute right of way and pedestrians must have a don't walk signal. You can split up the phases, but that'll make each cycle of signals take significantly longer and generally make everything slower. And a right arrow does nothing more to prevent a driver from deliberately breaking the law because they think they're important, than a green globe does.

Megaton327 said:
This suggestion is repeated every few pages on this thread, and as always, someone - in this case me - needs to remind people that a green right arrow means that pedestrians are prohibited from crossing the street. With a green globe, cars can turn right but must yield to pedestrians with a walk signal; with a green right arrow, cars have absolute right of way and pedestrians must have a don't walk signal. You can split up the phases, but that'll make each cycle of signals take significantly longer and generally make everything slower. And a right arrow does nothing more to prevent a driver from deliberately breaking the law because they think they're important, than a green globe does.
Click to expand...

When approaching a red light and a light with a solid green arrow, you may proceed in the direction of the arrow only after yielding the right of way to any other vehicles and pedestrians.
Click to expand...

You've cited the rules from Saskatchewan. Ontario would need to introduce legislation at the provincial level to make this change, and we all know that's never going to happen.

America’s Next Major Car-Free Street Will Be In San Francisco
In just a few days, private cars get the boot from Market Street. But enforcement will be key, advocates caution.

Market Street as seen today from a streetcar. Next week, private cars will be banned. Photo: Streetsblog/Rudick

Editor’s Note: San Francisco is making history this week by doing something that every city across America should consider: taking cars off its single busiest street for pedestrians, cyclists, and transit-users. Banning cars on Market Street will make life safer for the 500,000 San Franciscans who walk the road every day, says a rep for Mayor London Breed, and it’s just a part of her “broader vision to make streets safer across the City, which includes car-free spaces, slower speeds, and more protected bike lanes.” We offer Streetsblog SF‘s Roger Rudick’s take on the transformative potential of the new project, as well as how advocates might help overcome the project’s most easily anticipated pitfalls; cities who are considering taking a similar car-reducing step, take note.

On Wed., Jan. 29, private cars will be banned from Market Street, eastbound from 10th to Main and westbound from Steuart to Van Ness. Uber/Lyft will also be banned.

Advocates for safe streets are overjoyed. “Car-free market street has been talked about for decades, and we’re thrilled that next week it will finally happen,” wrote Livable City’s Tom Radulovich, in an email to Streetsblog. “We are excited for this next step towards designing people-centered, safe streets that prioritize sustainable trips and public transit,” added the San Francisco Transit Rider’s Cat Carter. “As San Francisco marks this accomplishment in shifting away from the primacy of private cars, we’re eager to improve more streets for public transit and all transit riders.”
Click to expand...

SFMTA crews have been getting prepared for this milestone for some time. City crews “… have already installed signs that will be unveiled on January 29th,” explained the agency in a blog post. “In addition, we’ve created new pedestrian safety zones, added new loading zones and are extending the Muni lanes down Market Street.”

Of course, the new signs and turning restrictions are part of a years-long, ongoing effort to reduce jams and safety problems on San Francisco’s iconic central corridor.

And the existing turning restrictions haven’t always been followed, sometimes leading to tragedy. That’s why “Enforcement will be key to Market’s success,” wrote Walk San Francisco’s Jodie Medeiros in an email. “The SF Bicycle Coalition has emphasized the need for the City to educate everyone who uses Market Street about the impending turn restrictions, and we have our own plans to mobilize volunteers on the street to collect feedback once those turn restrictions take effect,” added Brian Wiedenmeier of the San Francisco Bicycle Coalition.

He stressed that physical barriers, such as concrete diverters, and curb-protected bike lanes, are what’s ultimately needed to keep Market Street safe for cyclists and pedestrians. They are especially important since this ‘Better Market Street’ plan isn’t actually banning cars from driving down Market Street, as is often reported–it’s just banning private cars. Unfortunately, drivers of taxis and city vehicles have injured and killed their share of vulnerable road users on Market Street too. And, of course, private cars will continue to cross Market Street at intersections.

Concrete protection will come in a few years with the implementation of the longer-term “Better Market Street” plan. That project will tear up and rebuild the entire street, including replacing and upgrading underground utilities, adding bus-boarding islands, off-street loading zones, and a sidewalk-level protected bike lane.
Click to expand...

Next week, however, San Francisco will get a much-anticipated preview of how all of that will ultimately function – and what the banning of private cars will mean for transit, cyclists and pedestrian safety.

“Just today I was reading about New York’s 14th Street project, which limited car and truck access to improve bus service and cycling,” wrote Radulovich in his comments to Streetsblog.
Click to expand...

“We’re hoping that the Market Street project will offer similar benefits,” he concluded.
Click to expand...

San Francisco bans cars along a 2.2-mile Market Street corridor
Due Time restriction, visit my site https://www.flickr.com/photos/drum118/ to see updated photos of projects shot the last few weeks since I don't have the time to post them to various threads.
See my videos on YouTube https://www.youtube.com/user/Transitdrum118

It's been interesting so far to say the least. Lot's cars not realizing it at all - but I also haven't walked the full extent of the closure since it's happened. I work at the terminus end of Market and I'd argue traffic appears to be better around here than previously, which is great.