Department Stores then and now

DaninToronto said:
I remember it being a Kmart as well
Click to expand...

Yeah.. For a mall it's size, Stone Road sure has undergone some big changes..

They're doing some big changes again by grouping several stores into an H&M and moving one of their entrances too.

I'm not sure if it was unique to the Hamilton area but there was also a department store called Robinsons at Burlington Mall which I believe is a Zellers now, and soon to be a Target.

If we're talking about Hamilton proper I also remember the old Kresge's on King Street. It's a bingo hall now: Simpsons -> The Bay
The Bay -> Wal-Mart (Wikipedia claims Sears was located in between - was this true?)
Eatons -> Sears
Click to expand...

Simpsons - > the Bay (there was no Bay here before this)
Sears - > took over Eatons location
Walmart took Sears old location.
Last edited: Mar 14, 2012

As I learned awhile ago on an Urban Toronto thread, Ajax had a Sayvette in the Harwood Plaza at Bayly and Harwood. It has now been subdivided into individual stores on the lower level and offices on the upper level (including a call centre).
J

donoreo said:
Simpsons - > the Bay (there was no Bay here before this)
Sears - > took over Eatons location
Walmart took Sears old location.
Click to expand...

Looks like it was The Bay -> Sears -> Wal-Mart. Just double-checked a few sources, and here's an ad from The Bay's opening day at STC in 1979 as part of a 240,000 sq ft expansion. Simpsons also had an ad that day touting "Kenmore Days" at all of its GTA locations, including STC (in what was the dying days of its association with Sears). 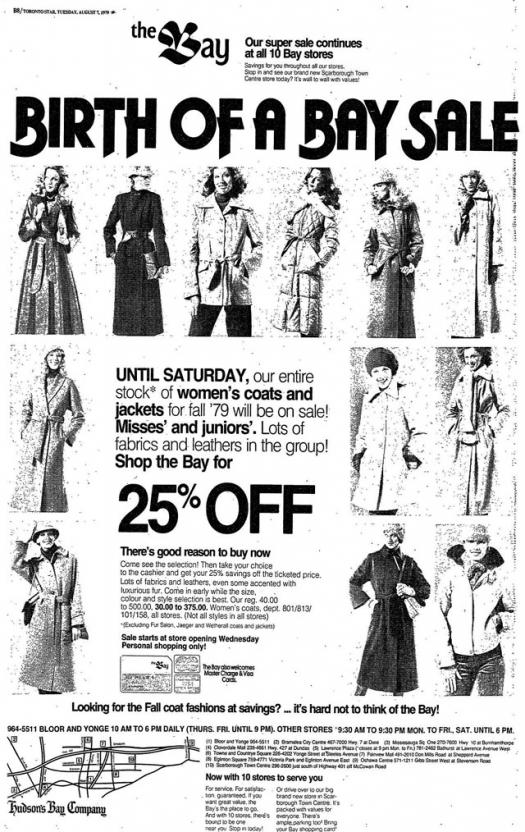 DaninToronto said:
Thanks for this. I'm actually interested in finding out more about even the discount department stores like Kmart and Woolco, Zellers etc.
Click to expand...

Here's a site about Towers, and others:

Misceallenous
Bayview Village: Kmart --> Chapters and the entire row of stores to the LCBO)
Bridlewood Mall: Kmart --> Zellers. Former Zellers on other side of building (Towers before it) was reverted to common mall space
Kennedy & Denison (SuperCentre Plaza) in Markham. SuperCentre --> Fortino's + Zellers --> Oriental Supermarket + Vacant. Toys "R" Us in outlot now a design "mall"
Follow me on Twitter! @samyyz
D

Any more information on Kmart? Seems only 3 are remembered.
S

The first Kmart I ever knew was at the E end of Albion Mall (is Canadian Tire there now?)

Agincourt Mall had a Kmart. I remember a Sayvette at Eglinton & Danforth Road.
Our roads are not here for automobiles. Our roads are here for people to get around. - Michael Bloomberg, Mayor of New York City - July 10, 2012

Original photographic images posted on this forum by dt_toronto_geek are not for publication, display or dissemination of any kind except on the Urban Toronto discussion board, altered or otherwise, without expressed written permission from the owner.
D

samsonyuen said:
Hillcrest Mall had a Kmart, I believe
Click to expand...

I'm guessing where the Zellers is now? I'm also wondering since there are two Bay stores that maybe one of them was a Simpsons before?

ShonTron said:
Besides Robinson's, Hamilton also had The Right House (the building has been repurposed). The Right House had other locations, I believe Kitchener had one.
Click to expand...

There were numerous Robinson's. One was located at Pen Centre in St. Catharines. It is now The Bay. I don't think it's there anymore / open to the public, but this Bay used to have a lower floor irc.

There was also a Right House in St. Catharines at Fairview Mall. It closed up, later became Zehrs and was rebuilt. I think.. and I'm really stretching my memory here... that Dominion used to be where the current Chapters & Future Shop are. A&P was where Food Basics is now.
Dominion closed, became Zehrs. Right House closed at the other end of the mall, Zehrs rebuilt that area and moved down the hall. Old Zehrs / Dominion rebuilt for Chapters, Future Shop. There was also a Woolworth in the mall. I think that space is now occupied by Mark's Work Warehouse. Zeller changed to Walmart recently during the Zellers chain closing.