There is another Zellers store in Bells Corners in suburban Ottawa.
B

Filip said:
The sad little mall at Queensway/Kipling is dying a slow death - mind you I think it has the only remaining Zellers store in Canada (all the logos, etc are still there and I believe its functioning as a discount bin store for HBC).

I bought a fantastic 7.5 ft prelit Christmas tree there last year for 50 bucks.
Click to expand...

Yea I took a walk around there when I used to work in the area. I loved Zellers but that is a truly depressing place to go too!
A

bcx said:
It worked well enough for a number of years until Pacific Mall was built right next to it.
Click to expand...

I agree--and Market Village in its 90s prime also complimented the inherent Markham-bound aspirational gentility of pre-Y2K GTA Chinese-Canadians, for whom a Pacific Mall set-up might, at the time, have seemed too coarse. Then, lo and behold, Pacific Mall soaked up all the action, and there was no looking back...
T 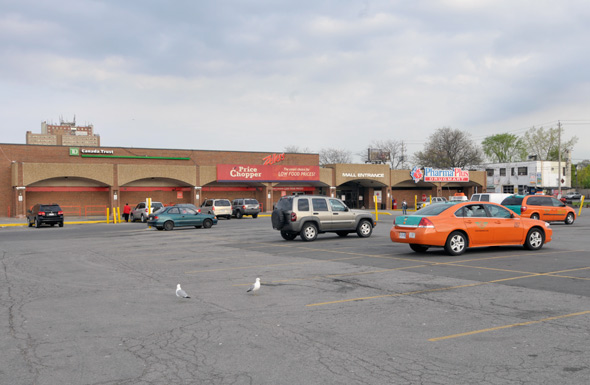 I hope the Gallaria can maintain some of its old flavour as a community for the Portugese and Italians. Much smaller than the Dufferin mall but I thinks it's much more personable.
Somehow Walmart seems to suit the Dufferin mall more in my opinion.
D

The Shops at 404 and Steeles is getting pretty bunged up. The Sears discount store is closing, it just had a pallet of sunlight soap and big underwear. The food Basics is still busy but the rest of that mall is not long for this world...

Dandy Horse said:
The Shops at 404 and Steeles is getting pretty bunged up. The Sears discount store is closing, it just had a pallet of sunlight soap and big underwear. The food Basics is still busy but the rest of that mall is not long for this world...
Click to expand...

The whole complex might end up Sinicized, which can be a good thing.
D

Johnny Au said:
The whole complex might end up Sinicized, which can be a good thing.
Click to expand...

Dandy Horse said:
What is sinicization?
Click to expand...

[To sinicize is] to make something Chinese in form or character, or to increase the Chinese influence on something.

Johnny Au said:
[To sinicize is] to make something Chinese in form or character, or to increase the Chinese influence on something.

Is that a pejorative, akin to my pre-politically correct youth in the 1980s where we'd rice a car? https://en.wikipedia.org/wiki/Rice_burner
https://twitter.com/AdmiralBeez
Trending #BlockedInToronto on Twitter.

Admiral Beez said:
Is that a pejorative, akin to my pre-politically correct youth in the 1980s where we'd rice a car? https://en.wikipedia.org/wiki/Rice_burner
Click to expand...

You got it the other way around. The term "sinicization" is a euphemism for making things Chinese.
G

How neighbourhood malls are struggling to survive
The ripple effects of the retail apocalypse that swept across the U.S. after the financial collapse of 2008 continue to emanate through Canada.

Mohammed Polani remembers the days when Whitby Mall Shopping Centre was packed with people who would line up outside his store at 7 a.m. to buy newspapers and magazines.

They were educated and literate, with a wide variety of hobbies and interests — diverse enough that he could sell magazines with titles like Vintage Fire Truck and Equipment and Wrist Watch Magazine and the Harvard Business Review.

“As long as there was a proper anchor, things were good,” says Polani. “The mall was like a can of sardines; it was very busy until about 2000.”

Then his clientele in the mall’s office space began to be relocated, as their companies were bought, sold and restructured.

The Woolco anchor store was replaced by a Walmart which was replaced partly by a Sobeys with no access through the mall. A second-hand store replaced a Staples.

The new generation of workers in the mall’s office spaces are more interested in Facebook and Instagram than they are in the magazines Polani sells, and they can access an infinite number of articles for free online.

At the end of his lease, Polani will hand in the keys to his store, joining a long list of retailers calling it quits in an unforgiving retail environment that is adding up to one long headache for mall owners.

Whitby Mall isn’t the only property struggling to attract and keep tenants. While top-tier malls, including Yorkdale and Toronto Eaton Centre are by all accounts flourishing, many neighbourhood malls appear to be an anchor away from a potentially fatal downward spiral. Others are clinging to their original retail purpose while waiting for redevelopment.

No one is predicting the kind of retail apocalypse in Canada that swept across the United States after the financial collapse of 2008, leaving even large malls across the country abandoned.

But the sector is in upheaval.

The retail industry is the single largest jobs category in the country, employing 1.96 million people in 2016, according to Statistics Canada. Most retail workers — 1.7 million — are employed in shopping centres, according to data from the International Council of Shopping Centres (ICSC.)

“Over the five years to 2021, the industry is forecast to continue contracting,” according to an industry report, “Department Stores in Canada,” from market research firm IBISWorld.

“Profit has also suffered over the five years to 2016, as many industry operators have slashed their selling prices in order to remain attractive to customers,” according to the report.

“Malls used to rely on their anchors and the anchors are changing faster than anyone imagined they would,” said Mary Mowbray, senior vice-president, group sales for Colliers International, pointing to Target, which cycled in and out of shopping malls in two years.

Some malls have already backfilled — or failed to backfill — the 133 large spaces left by Target when it abruptly pulled up stakes in 2015.

The failure of a retailer like Sears Canada — working on another turnaround strategy after years of diminishing returns and selling off stores — would send shock waves across the already fragile retail ecosystem.

Sears has closed 11 department store anchor locations across Canada since 2012. It still anchors 93.

RioCan Real Estate Investment Trust had 26 Target stores, and while CEO Edward Sonshine managed to extract a $132-million payment from Target in bankruptcy and many of the locations were leased to new tenants, others remain empty two years later, like the one at Five Points Mall in Oshawa.

Now the enclosed part of Five Points Mall will be demolished. The area where the empty Target store is located has been sold to a self-storage company. It will remain a shopping centre, but not enclosed.

Enclosed malls are too expensive to operate — the taxes are high, they’re expensive to heat in winter and cool in summer, said Sonshine.

“That type of space, unless you’re part of a very large centre, it’s obsolete,” he added.

“The big malls are all fine, but the smaller malls, like this one, they really have no reason to be a mall, it’s much cheaper for the tenants and for the customers, quite frankly, to not have it be enclosed.”

In the west end of the city, Kipling-Queensway mall has the same hushed feel of Five Corners. It is anchored by one of Canada’s two remaining Zellers stores (the other is in Ottawa.) A Sobeys moors the opposite end, but there are several vacant stores in the space between them, including a vacant kiosk space.

Honeydale mall in Etobicoke is widely believed to be Canada’s only ghost mall, boarded up and fenced off.

Malvern Town Centre, which cycled through a Zeller’s closure followed by a Target closure, lost its No Frills anchor on April 27, leaving a 70,000-square-foot space to fill.

“We are definitely going through a transition now,” said Jennifer Huntley, director of leasing at Davpart Inc., the company that owns and operates Malvern Town Centre.

She feels confident the mall will pull through — it brought in a 20,000-square-foot Planet Fitness last year and has plans for the No Frills space, but it’s too early to announce what those plans are.

“I think it’s going to get stronger, absolutely.”

Huntley said the company is working with city council to improve public transportation to the mall, and planned new housing developments will soon increase population density, creating a larger market.

Endrizzi blames the decline of the neighbourhood mall in part on a huge growth in the number of retail plazas and centres.

Though I think it's a great thing that older malls are being redeveloped into more urban forms, I have mixed feelings about power centres and outlet malls replacing them in the far burbs- those are urbanistically worse in almost every metric.
Last edited: May 6, 2017
B

Read the article and thought it was mostly well done. Though some fact checking needed to be done(like Malvern never had a Target).

Still sad regardless, a lot of these malls can still be made something really great.

AlvinofDiaspar said:
From the Star:

Sorry to bring back a old thread, but, we have a update on Alderwood Plaza. On March 1st, 2018, a Farm Boy grocery store will open in the largest space in the plaza, replacing the former TOPS Chinese Supermarket. Lets hope this has a effect on the rest of the not so busy plaza.
You must log in or register to post here.
Share:
Facebook Twitter Reddit Pinterest Tumblr WhatsApp Email Share Link