This might not be the appropriate place to post this video, but it touches on the divisiveness that has become so prevalent in America (and really: the Western world); which has been amplified in recent years. There are many other excellent points of wisdom to draw from this speech. Charlton Heston was an exceptionally cultivated and articulate man, as this video demonstrates (never mind how negatively he was portrayed by the media). Too bad our leaders don't possess a fragment of the integrity and genuine conviction he had.

I still don't believe him.
Death to Videodrome! Long live the new flesh! 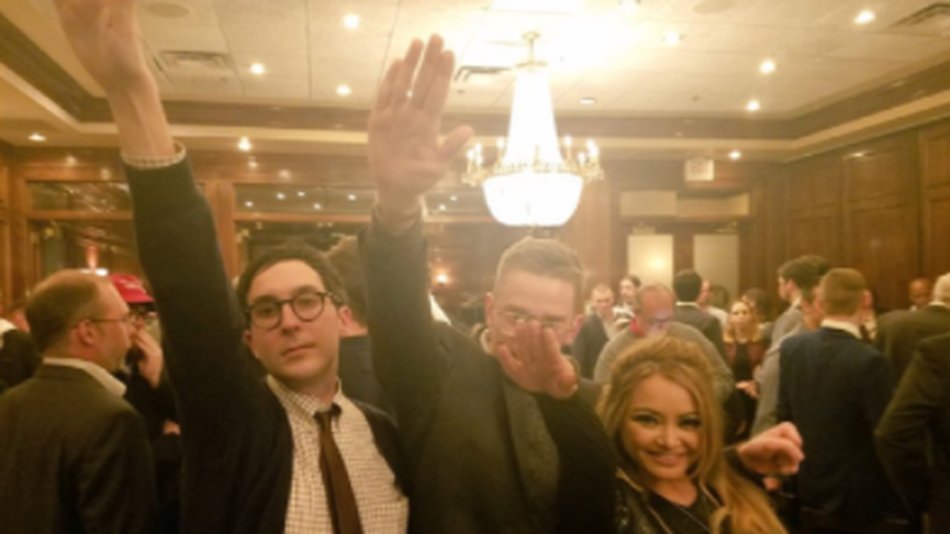 And there are people on this very board that believe Trump winning the election had nothing to do with race. Hard to deny it IMO.
E

Holy shit. Sometimes I can't believe this is really happening. Are people that stupid and ignorant of history? The Nazi salute is nothing less than a symbol of the worst kind of hate. Young adults and children need reminders about where this all can lead, and it's devastating.
K

Who to believe? The FBI or Fox News...

In its report on Monday, the F.B.I. cataloged a total of 5,818 hate crimes in 2015 — a rise of about 6 percent over the previous year — including assaults, bombings, threats, and property destruction against minorities, women, gays and others.

Attacks against Muslim Americans saw the biggest surge. There were 257 reports of assaults, attacks on mosques and other hate crimes against Muslims last year, a jump of about 67 percent over 2014. It was the highest total since 2001, when more than 480 attacks occurred in the aftermath of the Sept. 11 attacks.

Fake hate crimes have been on the rise for years. But Trump’s election all but guaranteed that we would see an unprecedented level of alleged hate crimes and hate crime hoaxes. The far left has become so emotionally invested in the idea that a Trump presidency would spark an onslaught of hate and violence that they simply cannot let these fears go invalidated. And when there are no actual hate crimes to be found, they must be fabricated. (Note to hate crime hoaxters: Be more creative. Use something other than the swastika. It's a dead giveaway that you're a fake.)
Last edited: Nov 26, 2016

Moonflake said:
SHOCK: Another Pro-Trump Hate Crime Turned Out To Be A Hoax
http://www.dailywire.com/news/11082...hate-crime-turned-out-be-amanda-prestigiacomo
Click to expand...

It's nice to see that you get your news from highly credible, non-partisan media outlets.

Following the stunning election of Republican Donald Trump, leftists took to the streets to "protest" the democratic election by destroying liberal cities, committing acts of arson, assaulting Trump supporters and crashing car windows, along with other acts supposedly promoting their ironic "love trumps hate" mantra. In response, the left-wing mainstream media have clung to rumors of "hate crimes" committed by Trump supporters.
Click to expand...

salsa said:
It's nice to see that you get your news from highly credible, non-partisan media outlets.
Click to expand...

What I care about is whether what the article claims is true or not. Why don't you comment on that?

Daily Wire owns its conservative slant, unlike mainstream sources which pretend to be objective, but always lean to the left. All news/journalism is biased.

Just to clarify: Daily Wire isn't pro-Trump (if that is what you're hinting when you said "non-partisan"; or perhaps you were referring to the the excessive use of: "leftist/liberal.")

Where do you get your news from and what makes it more credible?
Last edited: Nov 26, 2016

TheKingEast said:
And there are people on this very board that believe Trump winning the election had nothing to do with race. Hard to deny it IMO.
Click to expand...

It was never about race and will not be about race. Trump simply has no interest in race whatsoever. If you think otherwise, you don't know him well. All he did and say was about the US economy. It was ALWAYS about the US economy and jobs, everything. Whoever fail to see that and obsess with trivial things like race is missing the whole point.

I am not denying some of his speeches gives rise to racism among people who didn't have the capacity to understand him, but the election was not about race, and it is the democratic people who keep playing the race card so habitually that they end up losing big time.

Honestly, the fact so many people continue to talk about matters such as race, women, LGBT etc make me want to laugh. Is that what a presidential election is all about? Seriously? Well, apparently democrats' strategy kind of worked (but failed ultimately). Not that those don't matter, but they are not key issues. What are the key issues 1. economy 2. foreign policy. Everything else in comparison is less important. And it is because this I think Mrs Clinton not being the next president is doing a huge favor the the American people as well as mankind (a million civilian lives in Middle East won't be lost due to her presidency).

But I am sure all we talk about is still race here. Keep going. One really thinks that the racial tension in the US can somehow become worse because of Trump? Under all-loving Mrs Obama it didn't work out that well either, did it? The entire US race policy is a huge failure. It is not something from a politician mouth can change.

Letters threatening that President-elect Donald Trump will do to Muslims what Adolf Hitler “did to the Jews” were sent to three California mosques last week, according to the Council on Islamic-American Relations, or CAIR.

The handwritten letter, which referred to Muslims as “children of Satan,” were mailed to Islamic centers in San Jose in Northern California and Long Beach and Pomona in Southern California. It called Trump the “new sherriff [sic] in town” who will “cleanse America and make it shine again” by eradicating the country’s Muslim population.

“You Muslims are a vile and filthy people. Your mothers are whores and your fathers are dogs,” the letter states. “You are evil. You worship the devil. But, your day of reckoning has arrived.” 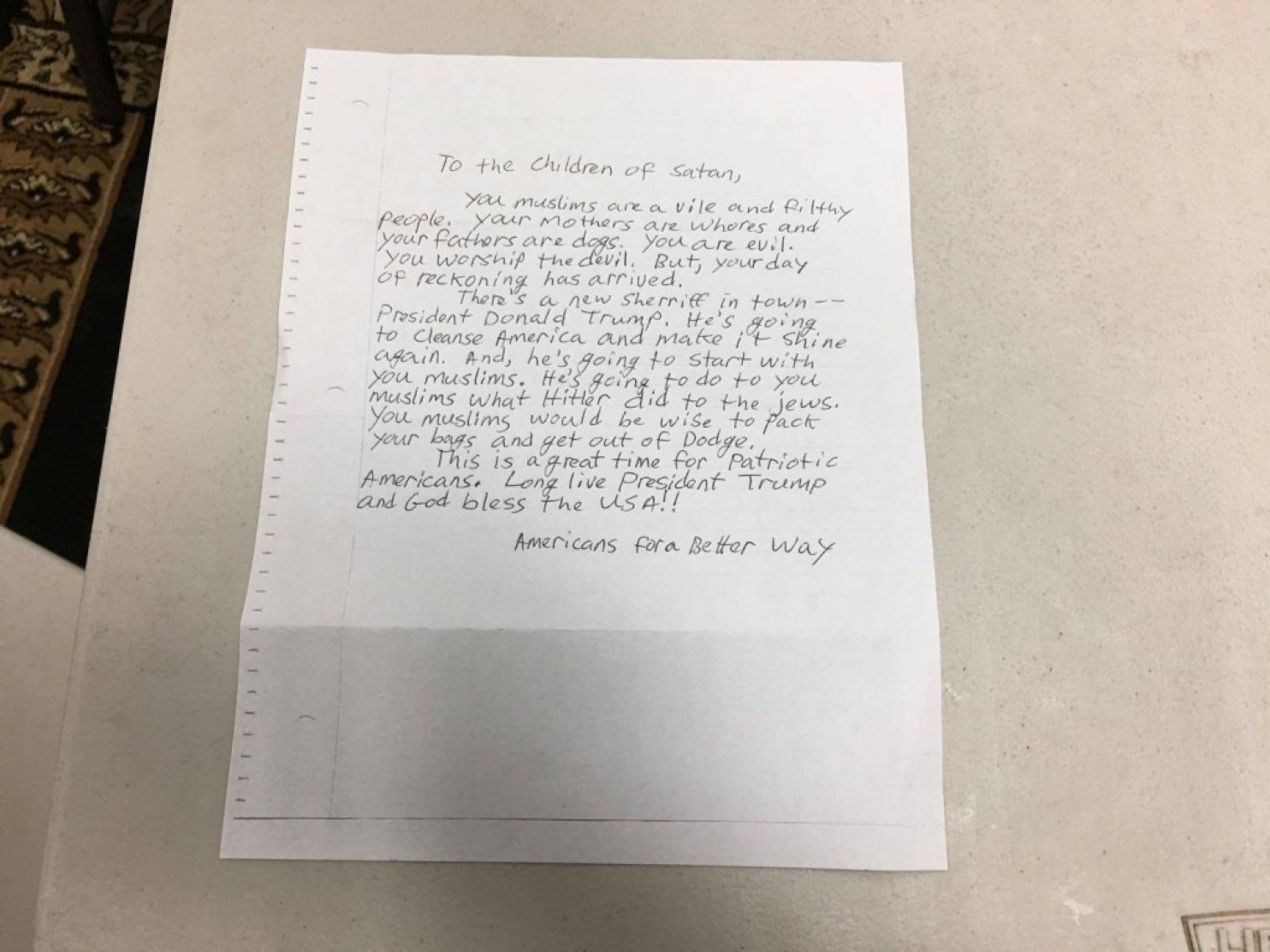 For those who like their "alt-right" conspiracies multilayered and their news faked... hold on, there's lots more coming. Great read on the very profitable fake news business.

A lot of fake and misleading news stories were shared across social media during the election. One that got a lot of traffic had this headline: "FBI Agent Suspected In Hillary Email Leaks Found Dead In Apparent Murder-Suicide." The story is completely false, but it was shared on Facebook over half a million times.

We wondered who was behind that story and why it was written. It appeared on a site that had the look and feel of a local newspaper. Denverguardian.com even had the local weather. But it had only one news story — the fake one.
Last edited: Nov 29, 2016