fiendishlibrarian said:
So a Winners and a Target in the same complex?
Click to expand...

Cloverdale Mall has both.

bAuHaUs said:
Word is that Target is moving into Y+S centre, and that's why there has been a theatre shuffle.
Click to expand...

"RioCan will also remove the “moat” of sunken retail spaces around the building’s base to create large-format retail uses at ground level, which could fit new anchor tenants, said Robert Gibson, the City of Toronto senior planner assigned to handle RioCan’s applications."

He said the area could “absolutely not” handle more residences, but he was optimistic about plans to raise its currently hard-to-see retail spaces to ground level and expand shop sizes.
Click to expand...

Not sure what he expects when he's councillor of a place designated for growth.

The problem with the area is that it doesn't get the infrastructures needed to accomodate the growth of the area. For example, Yonge-401 interchange was last redesigned in the mid-1960s when this area was full of small bungalows on large lots and strip plaza stores along Yonge,... today, a canyon of condos - 50 new condos in the last 15 years. Not enough local school capacity,... many kids are bused out of the area.

Let's face it,... condos are a cash cow for the city in terms of generating property tax revenue,.. VS the old houses that used to occupy those properties,.... but where's all the new property tax money going? Where's the investment in infrastructure???
Where High-Density Development Are In GTA & Who Lives There: http://neoformix.com/Projects/DotMaps/TorontoVisMin.html
Interactive Commuting (Drive, Transit, Cycle, Walk) Mode Share By Census Tract: http://www3.thestar.com/static/googlemaps/100105_bikes.html

"RioCan will also remove the â€œmoatâ€ of sunken retail spaces around the buildingâ€™s base to create large-format retail uses at ground level, which could fit new anchor tenants, said Robert Gibson, the City of Toronto senior planner assigned to handle RioCanâ€™s applications."

Actually,... RioCan really doesn't have much choice when it comes to removing their â€œmoatâ€ of sunken retail. If you walk on the sidewalk on Yonge Street in front of Sheppard Centre,... especially closer to Sheppard,... you`d think you`re walking on super wide city sidewalk that are about 22 feet wide. But in reality, the city sidewalk is only about 10-12 feet wide and parts of it is blocked by tree planters, newspaperboxes, garbage cans, etc,...

But what about the rest of that super wide sidewalk,... it`s Sheppard Centre property,... RioCan property,... If you look closely, you`ll notice the paving is different that regular city sidewalk,.. And from the corner of Yonge & Sheppard if you use that little undergound walkway to the Subway station,... you`ll notice the underground retail space (one used to be a flower shop, another used to be employment agency, etc,...),... and directely above these retail space is the sidewalk that is actually owned by Sheppard Centre.

Now whenever there is redevelopment along certain main arteries like Yonge & Sheppard,... often the city will usually take some of the private property in order to widen road and-or widen the pedestrian sidewalk. In this case, with the proposed condo for Sheppard Centre and new retail redevelopment,.... the city seems to be requesting some of this land from to widen the city sidewalk,... At the end of the day,... the pedestrian sidewalk will likely remain the current 22 feet wide,... but it will all be owned by the city,... with no retail space directly below.
Click to expand...

Interesting,... if you notice in the photo of retail mall,... the former Cineplex upper theatre space (between the two office towers) is shown split into 2 retail levels. 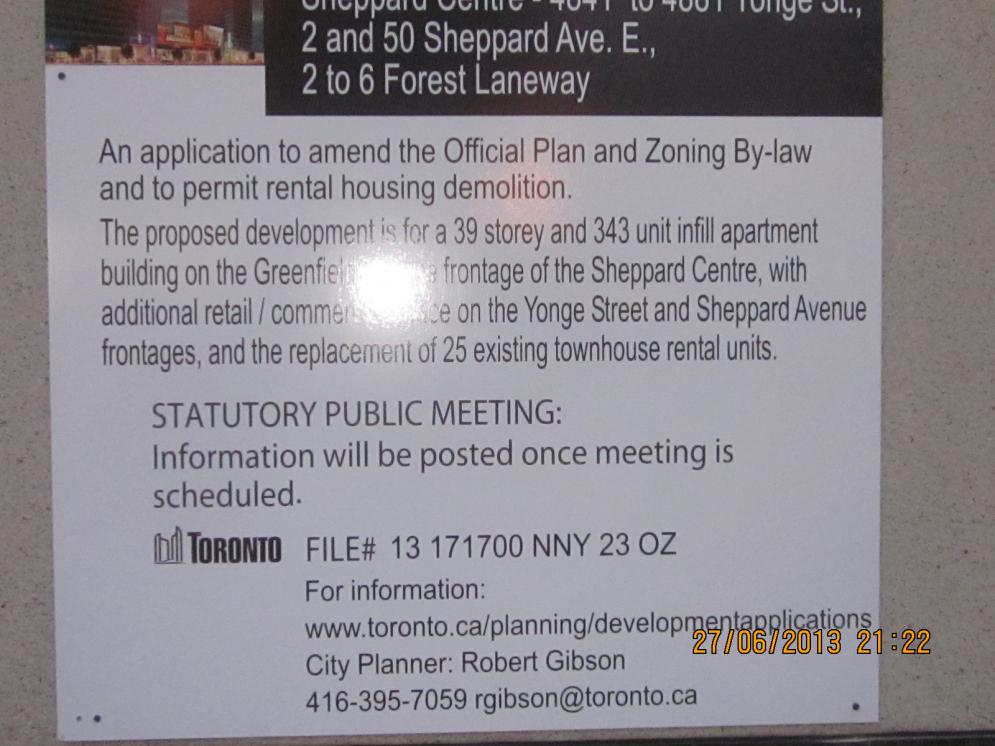 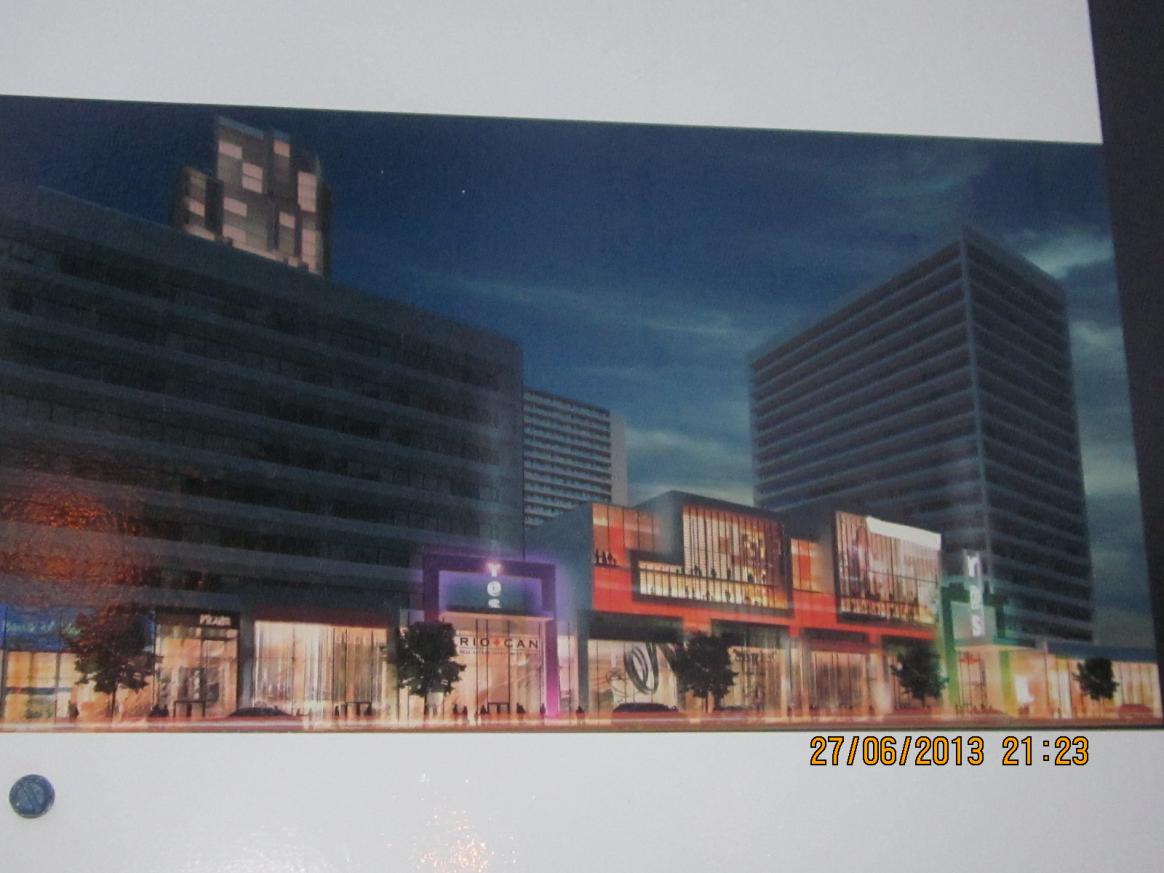 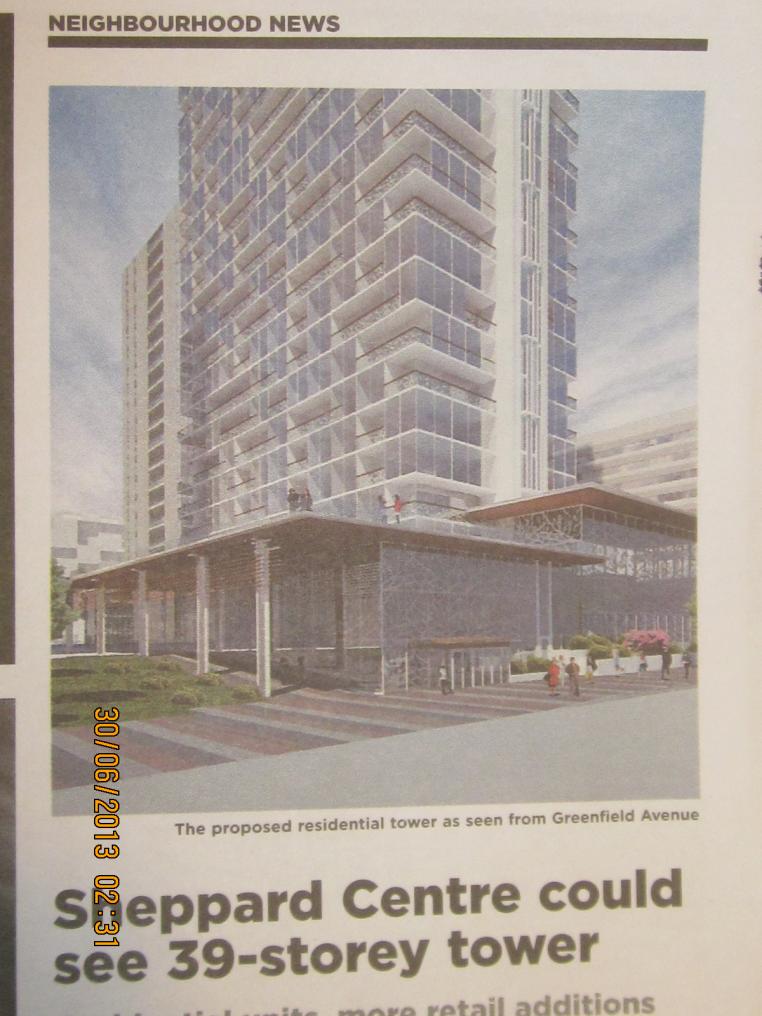 Interesting,... if you notice in the photo of retail mall,... the former Cineplex upper theatre space (between the two office towers) is shown split into 2 retail levels.
Click to expand...

The bottom right corner of the photo provides a clue to how they plan to deal with the moat - there's a 1 story retailpodium that wraps around the Yonge & Sheppard corner. It will be interesting to see what kind of retail they attract. Despite the population density, the area has struggled to attract strong retail (Whole Foods being a rare exception).
Last edited by a moderator: Jul 2, 2013

It's not like the area is full of flea-markets, pawn shops, bars, stripclubs and massage parlours. There's plenty of strong retail in the area (both brand name chains and independents),... and a nice diversity of retail too. The retail mix here is better than 90% of the GTA,...

With all the condos going up,... one issue is developers often have to give "concessions" to the locals,... and often, they'll put in retail space on ground floor as "concession",... since it'll give the existing locals a way to connect to the new development,... but at the same time it's a revenue generator for the property owner,... much better for the developer than donating land for parks or more money for schools, library, community centres, etc,... And for the property owner, they maximize their retail rental income by dividing the retail space into smaller stores.

Hence, NYCC is full of areas with small retails spaces,...

Now with Tridel Hullmark Centre about to open by year end with 2 storey of retail space,... and EmeraldPark's 2 storey of retail space likely opening late next year,.... SheppardCentre needs to revamp itself,... SheppardCentre is full of small stores and it needs a large anchor to attract shoppers.
Where High-Density Development Are In GTA & Who Lives There: http://neoformix.com/Projects/DotMaps/TorontoVisMin.html
Interactive Commuting (Drive, Transit, Cycle, Walk) Mode Share By Census Tract: http://www3.thestar.com/static/googlemaps/100105_bikes.html
X

And they would be correct. Need an anchor tenant, says who? There are plenty of people living in the area, and soon to be many more. It will become a (larger) destination without big-box retail.
Last edited: Jul 1, 2013

Mr Sonshine--I swear it's you --yes, small retail does create more interesting streetscapes. Where would you rather hang out--Dundas or Queen West or a DumbCentre on a Saturday afternoon?

The rental tower looks quite decent. Quadrangle's trying harder to please the critics these days--good to see
Last edited: Jul 1, 2013
Canadian architecture I like: https://twitter.com/renderpornstar

Walk up Yonge, and before Finch you'll see a 2 relatively new condos (Tridels triomphe complex ... maybe 4 buildings). It is FULL of small retail fronting Yonge street, 30+ strores ... and they're all fairly sucesfull, yes there are a few typical nail salons, but many restaurants / clothing stores ... It works very well.
If I had a penny for every time someone asked me why I was looking upâ€¦


If you think about all the stores that you usually visit in a regular week,... are they all small stores? Are they large stores? It would likely be a nice mixture,...

Personally, mine is more of a mixture leaning towards larger stores. Why? Larger stores offer much more selection, better prices and I can get more shopping done in one store,... instead of running around everywhere and lining up. And often, I'll leave the area to shop at larger stores,.... but wouldn't it be great if some of these larger stores were in NYCC area?

If you think small stores make an area walkable,... how is NYCC area walkable?,... if I'm leaving the area to do my shopping elsewhere???

The problem is NYCC area already has too much small retail spaces,... most of the lower concourse of North York City Centre is empty! The shops in Madison Centre was doing so poorly, they converted most of that space to a restaurant and ExtremeFitness (now GoodLife),... many of the lower level shops in SheppardCentre in the "moat" has been empty for years especially that retail space in the northwest corner that used the be a Keg restaurant and Golden Griddle before that,...

Currently what are the large stores in NYCC? The Loblaws, FutureShop & Staple in EmpressWalk which by the way really isn't large compared to Loblaw SuperCentres or a normal sized FutureShop. The ShoppersDrugMart at Yonge&Finch & SheppardCentre and Winner's at SheppardCentre,... and the Metro on Church & Doris.

Today's urban designers would never allow large multi-storey stand alone stores like Simpson to be built at Yonge & Queen,... why? They would insist that the street-level area be divided into many small stores with about 15-50 foot frontage. Today, that former Simpson store still takes up the whole block from Yonge to Bay, Queen to Richmond,... and a hundred years after that store was built,... isn't that area still walkable?
Where High-Density Development Are In GTA & Who Lives There: http://neoformix.com/Projects/DotMaps/TorontoVisMin.html
Interactive Commuting (Drive, Transit, Cycle, Walk) Mode Share By Census Tract: http://www3.thestar.com/static/googlemaps/100105_bikes.html

Too much small retail? "Clearly"? Based upon what measurement? You need a Walmart to "balance things out"? This is probably the most unsubstantiated absurd thing I have read this week.

He does have a point to a certain extent. The area could use another grocery store (and it is getting 2 more) as well as some larger spaces for other large format retailers such as target, Canadian tire, etc. it also needs many more mid size retail spots.