bAuHaUs said:
Riocan is planning something similar in north Oshawa on the Windfield Farms land.
Click to expand...

Interesting news! Does Oshawa have the population/growth for a Sq1 sized mall in that area? Will it be close to the expanded 407?

skylyte said:
Interesting news! Does Oshawa have the population/growth for a Sq1 sized mall in that area? Will it be close to the expanded 407?
Click to expand...

It will come in at over 1 million SF, and they are calling it a hybrid centre (mix of walkable core area, surrounded by bigger box-type retail uses). It won't be a mall per se, and yes it's going to be right at the expanded 407 east at Simcoe in north Oshawa).

http://www.google.ca/url?sa=t&rct=j...-4_0GRsCMR9D68HpA&sig2=-N56Qqyo6K9qZrCk5P8BwQ
"Without Sicily, Italy leaves no image in the soul. Sicily is the key to everything." â€” Johann Wolfgang von Goethe.

It's called a "Power Centre" and I think Canada's climate is better served with the enclosed mall concept. The current winter that never ends is a good example why. (IMO)

These posts about Oshawa probably belong in a separate thread. If there isn't one already maybe it should be created?

Those slats are really classy looking, but I think they should have changed the glass, as it's really busy/cluttered looking with all the lines now.

The main entrance from the mall to the bus terminal will close June 2 night and not reopen until the new one is built next year.

I expect to see the parking lot close being July since most store below are not moving until the end of June that still exist today there.

Most of the skylight will be finish by the end of the month with the railing on the 2nd floor done by July.

All the floor tiles in the food court is being remove with new ones to be place.

They are starting to put the trim work on the columns by Target.

Steel work is in place for the new escalators in the centre area and waiting for them there as well where the other ones were in the central mall corridor. The strike will have an effect on these ones.

Have not receive any plans for this first expansion as yet as thing are still being change and not finalize yet.
Due Time restriction, visit my site https://www.flickr.com/photos/drum118/ to see updated photos of projects shot the last few weeks since I don't have the time to post them to various threads.
See my videos on YouTube https://www.youtube.com/user/Transitdrum118

So how will people get to the bus terminal from the mall? Through Target? That will be a disaster for Target!

khristopher said:
So how will people get to the bus terminal from the mall? Through Target? That will be a disaster for Target!
Click to expand...

Its either Target, Sears or walking over to the east entrance.

Target may hope to generate more customers with this detour if the lack of customers is as bad as I think it is for that store.

Haven't been back since it open, but will have to use it to get to the mall in June.

They may built a cover walkway beside Target after they remove the police station and the current walkway cover since this will be where the new hallway will be for the extension in the first place. It could be ready by August.

They may either knock holes in Target wall where the steel columns are now so the new roof support can tie into them or put a new row of columns beside the existing wall. With the overhead protection in place, it will allow crews to do their work during the day.
Due Time restriction, visit my site https://www.flickr.com/photos/drum118/ to see updated photos of projects shot the last few weeks since I don't have the time to post them to various threads.
See my videos on YouTube https://www.youtube.com/user/Transitdrum118
5

with by law for Main Street district of the downtown core being established the the Holts expansion hardly fits with the city vision of Mainstreet..just another
expansion of the shopping centre that is already too big!!

There was a committee of a adjustment hearing on May 16 that I fail to noticed. Only saw a sign posted by Walmart, but never got near it until May 22 when I saw one by the bus terminal for the first time. No big deal with this change.

The application was to reduce the 75% glazing to 51% along with reducing the height from 3 storey to 1 & 2 storey.

The expansion area from the current entrance. Due Time restriction, visit my site https://www.flickr.com/photos/drum118/ to see updated photos of projects shot the last few weeks since I don't have the time to post them to various threads.
See my videos on YouTube https://www.youtube.com/user/Transitdrum118
A 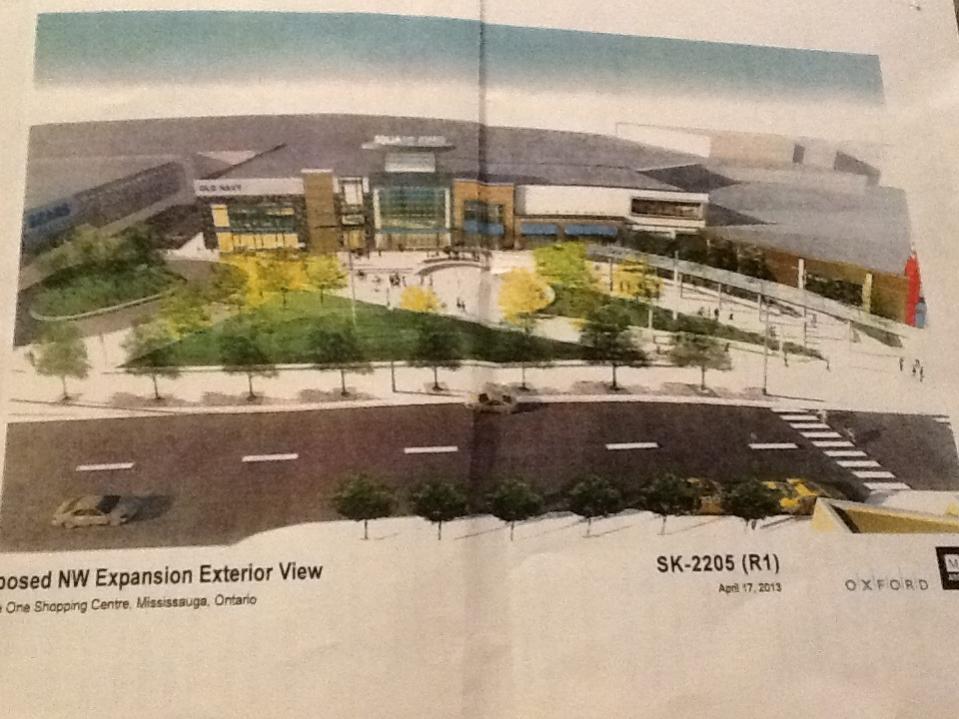 The store on the right looks like the signage says either Pottery or Burberry. I don't see a Barn, so it must be Burberry.

I don't know why they didn't extend the mall right out to the street, and build an underground tunnel to the bus terminal instead? Unless it's because they're going to change the terminal in the future.

That rendering is opposite to what was presented at the first committee hearing.

The building ran flush with Sq One Dr and took up all the existing parking lot with a wide sidewalk there.

The build is less than 50% now than the first one.

Can't built a tunnel as it too costly and no room in the bus terminal for it as well another elevator. Can't use the existing one as you would have to rebuilt it and that would fly in the face of council since they are pro active on accessibility.
Due Time restriction, visit my site https://www.flickr.com/photos/drum118/ to see updated photos of projects shot the last few weeks since I don't have the time to post them to various threads.
See my videos on YouTube https://www.youtube.com/user/Transitdrum118
You must log in or register to post here.
Share:
Facebook Twitter Reddit Pinterest Tumblr WhatsApp Email Share Link