I recall reading that tree cover is increasing in developed countries across the board. Something about societies becoming more aware/better educated and wising up to the dangers of deforestation/environment damage. EDIT: are there genetically modified salt resistant trees available?
2017 STWM Half Marathon 1:43
2018 STWM Full Marathon 4:18
S

Neutrino said:
I recall reading that tree cover is increasing in developed countries across the board. Something about societies becoming more aware/better educated and wising up to the dangers of deforestation/environment damage.
Click to expand...

I wish that were the case. Unfortunately global forestry is still in rapid decline, and for reasons that are once again down to human factors:

Not according to this study: https://phys.org/news/2018-08-global-forest-loss-years-offset.html

This one also contends that the warming climate has helped tree growth.
2017 STWM Half Marathon 1:43
2018 STWM Full Marathon 4:18
S

Neutrino said:
Not according to this study: https://phys.org/news/2018-08-global-forest-loss-years-offset.html

This one also contends that the warming climate has helped tree growth.
Click to expand...

There are caveats that appear to be applicable however. I'll dig more on this tomorrow, dog tired right now.

Study – Global Tree cover on the rise – possibly due to CO2/global ...

https://wattsupwiththat.com/.../study-global-tree-cover-on-the-rise-thanks-to-co2-indu...
Sep 7, 2018 - Global tree canopy cover increased by 2.24 million square ... are expanding as climate warming enables trees to grow higher up on mountains.
Why increase in global tree cover does not call for celebration

https://www.downtoearth.org.in/.../why-increase-in-global-tree-cover-does-not-call-fo...
Sep 11, 2018 - Much of it could be due to the increase in planted forests, which are more vulnerable to extreme climatic events.
Click to expand...

^ I was searching some more on the Icelandic situation, it's such a positive hopeful story. I'm now eager to visit there, fares are really quite affordable, just to visit and experience their new forests. Iceland always fascinated me, but the assumed lack of trees had deterred that.

The National Geographic film keeps showing in my Google search, and here it is on the Nat Geo website with some supporting text:

The landscape of Iceland has changed a lot in a thousand years. When the Vikings first arrived in the ninth century, the land was covered in 25 to 40 percent forest. Within a few centuries, almost all of the island’s trees were slashed and burned to make room for farming. This rapid deforestation has resulted in massive soil erosion that puts the island at risk for desertification.

Today, the Icelandic Forest Service has taken on the mammoth task of bringing back the woodlands. With the help of forestry societies and forest farmers, Iceland’s trees are slowly beginning to make a comeback. Watch this short film by Euforgen to learn more about how their efforts are working to benefit Iceland's economy and ecology through forestry.

Produced by Duckrabbit and directed by Ewa Hermanowicz.

The Short Film Showcase spotlights exceptional short videos created by filmmakers from around the world and selected by National Geographic editors. We look for work that affirms National Geographic's belief in the power of science, exploration, and storytelling to change the world. To submit a film for consideration, please email sfs@natgeo.com. The filmmakers created the content presented, and the opinions expressed are their own, not those of National Geographic Partners.
Click to expand...

And an exquisite interactive from the NYTimes:
https://www.nytimes.com/interactive/2017/10/20/climate/iceland-trees-reforestation.html

@Northern Light will especially take interest in how the initial replanting of Larch was not a lasting success, due to....Climate Change! They are now able to plant hybrids tailored to the present Icelandic climate with a much greater result.

This may appear to be getting away from the thread surmise, but not really. There's a very real positive impetus from this success that can be planted elsewhere.

https://www.nordgen.org/.../hybrid-larch-production-in-iceland-in-search-for-the-opti...
Mar 21, 2018 - Pollination of hybrid larch. Photo: Petur Halldorsson. In Iceland, with practically no forests until recently and only one native forest-forming tree ...
In The Giant Redwood Forests Of Iceland - The Reykjavik Grapevine

https://grapevine.is/travel/destinations/2014/.../in-the-giant-redwood-forests-of-iceland...
Aug 25, 2014 - Visitors to Iceland seem to have no interest in the island's forests. Instead ... Here was a grove of Siberian larch, and here were several Alaskan ...

https://guidetoiceland.is › Connect with locals › Regína Hrönn Ragnarsdóttir
It is Iceland's first national forest and has been preserved since 1905. ... The oldest larch grove in Hallormsstaðaskógur forest, Guttormslundur grove, dates back ...
[...]
Click to expand...

Any abourists here? Or people with tree experience?

Noticed the tree in front of the house has something white growing on it. Anybody have an idea of what this is and should I be concerned? 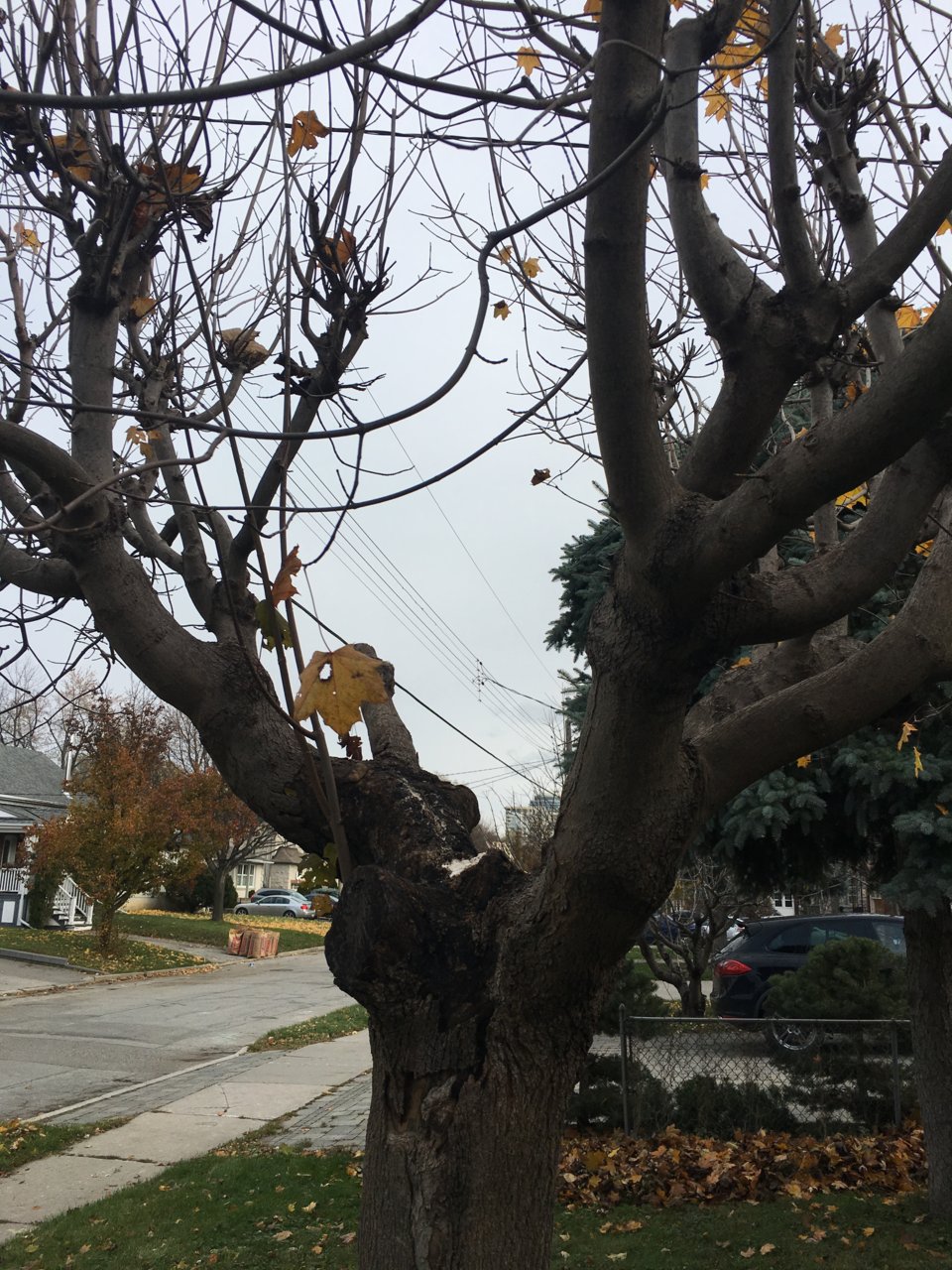 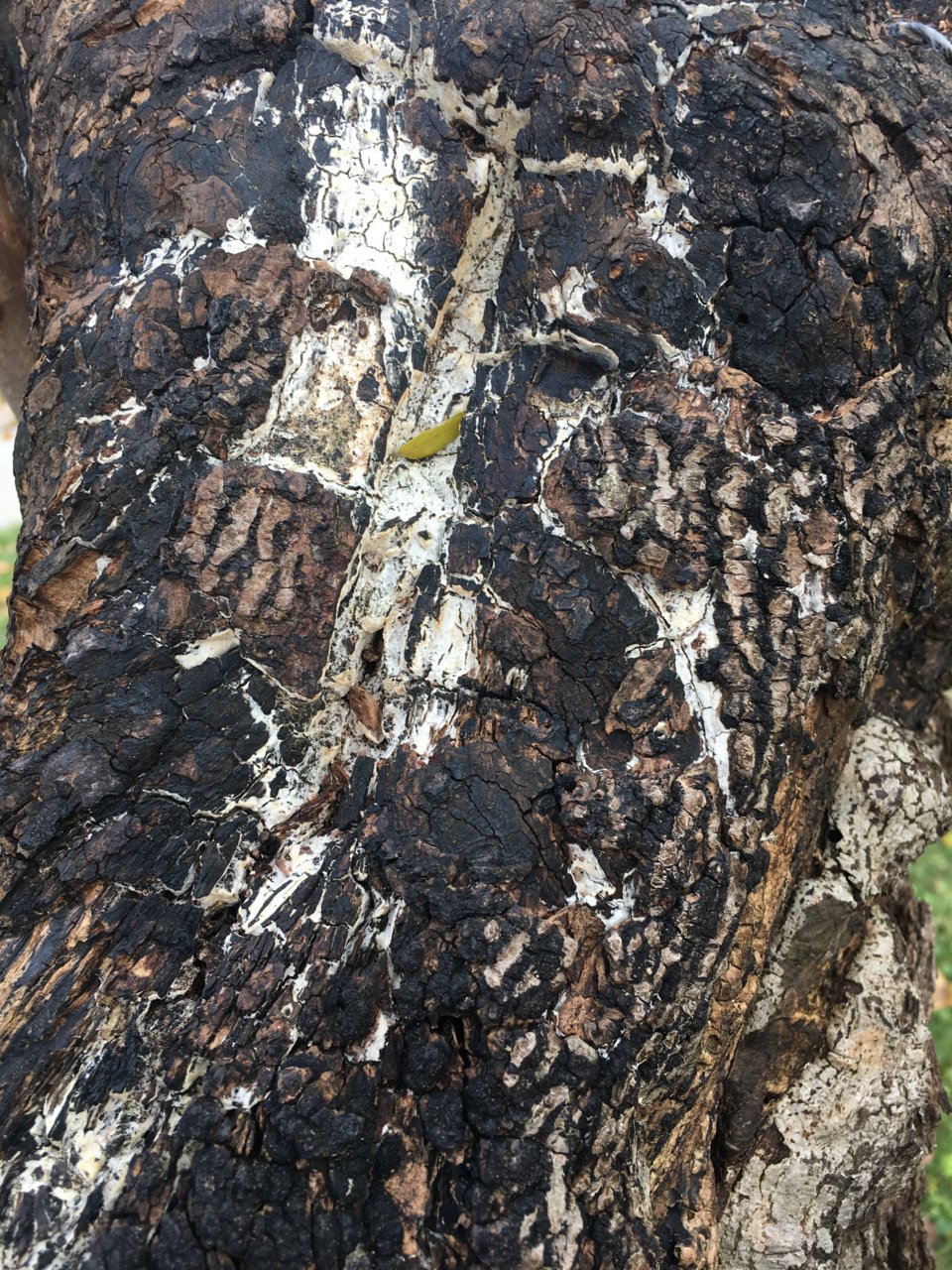 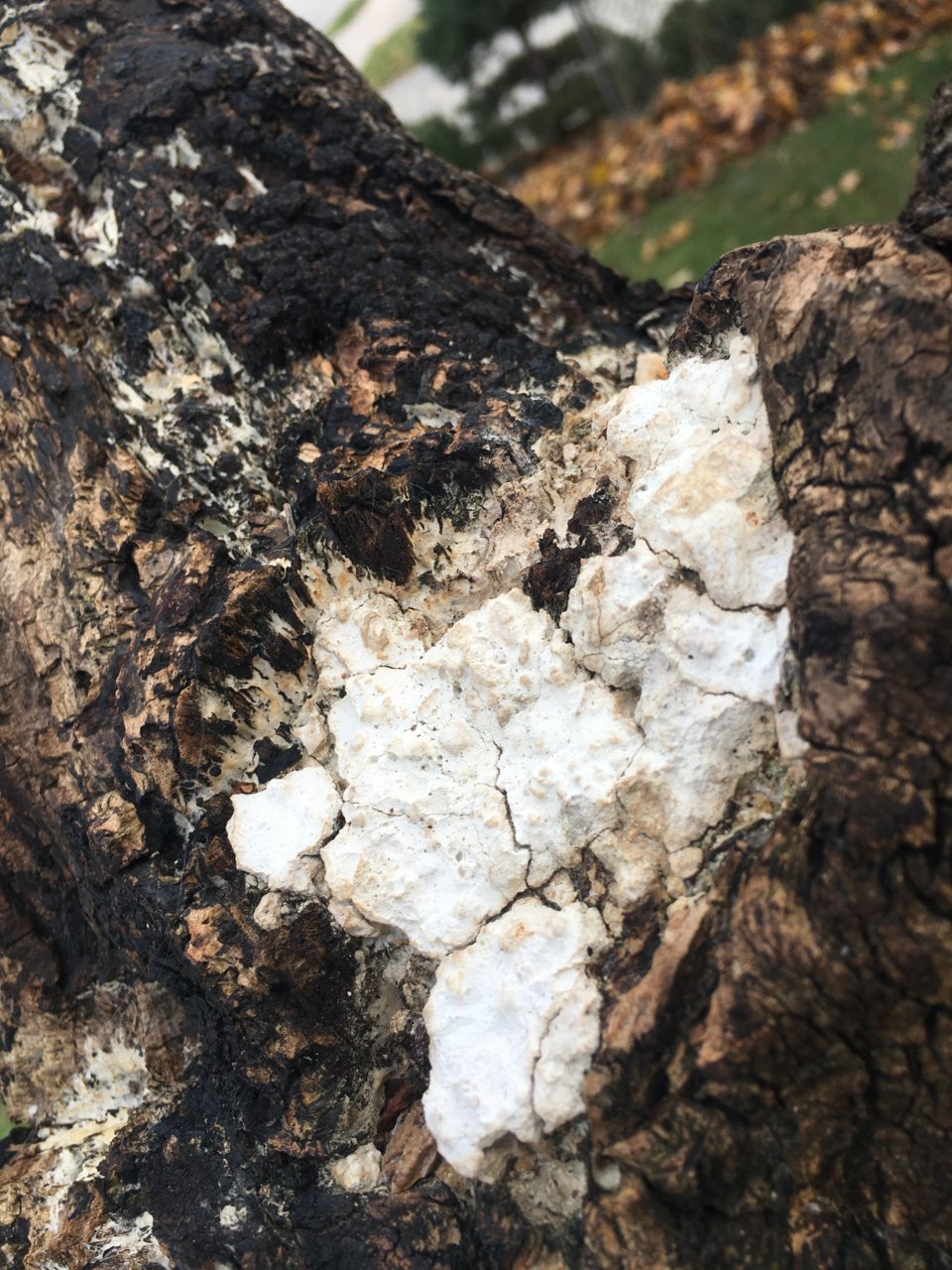 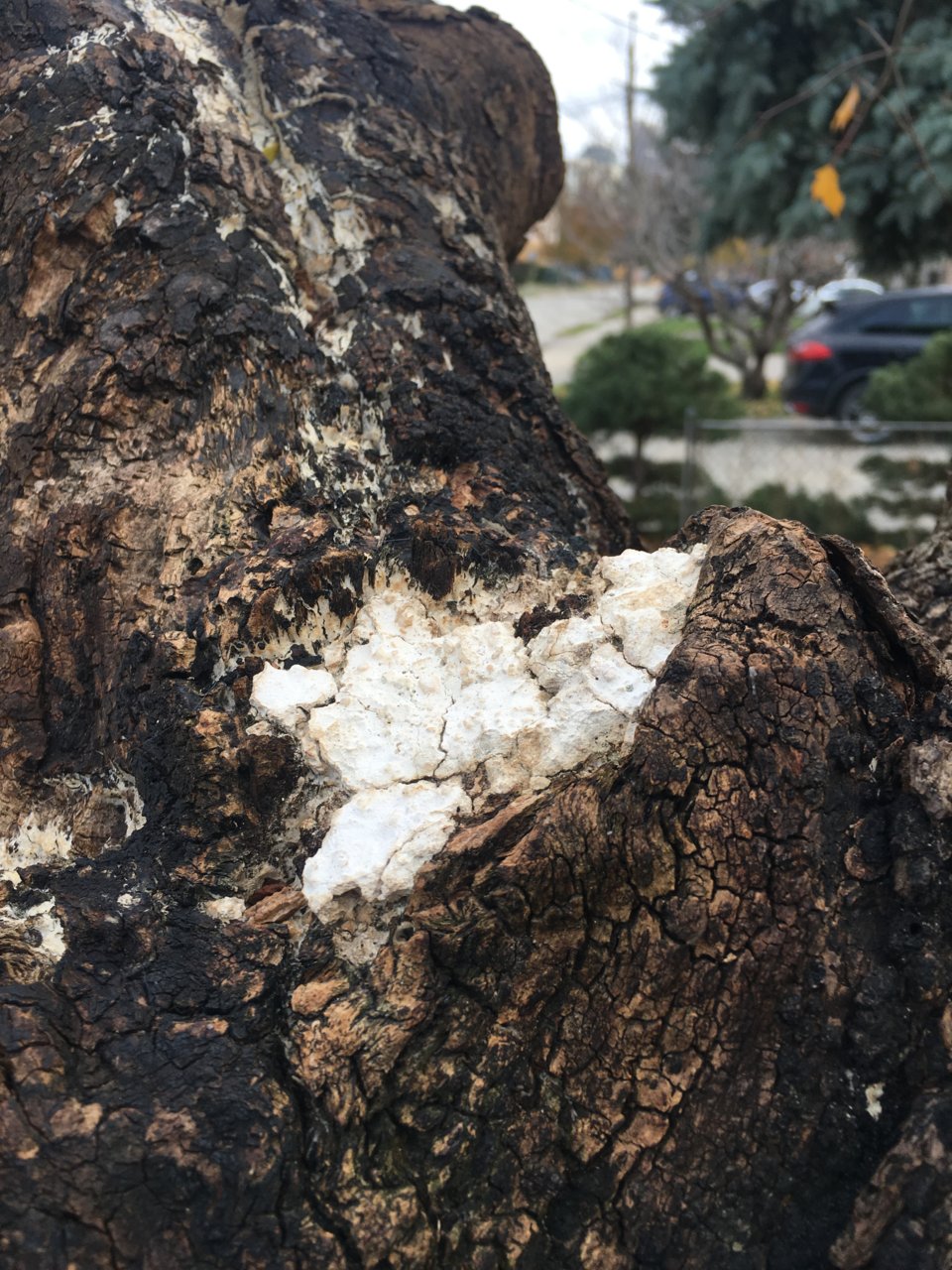 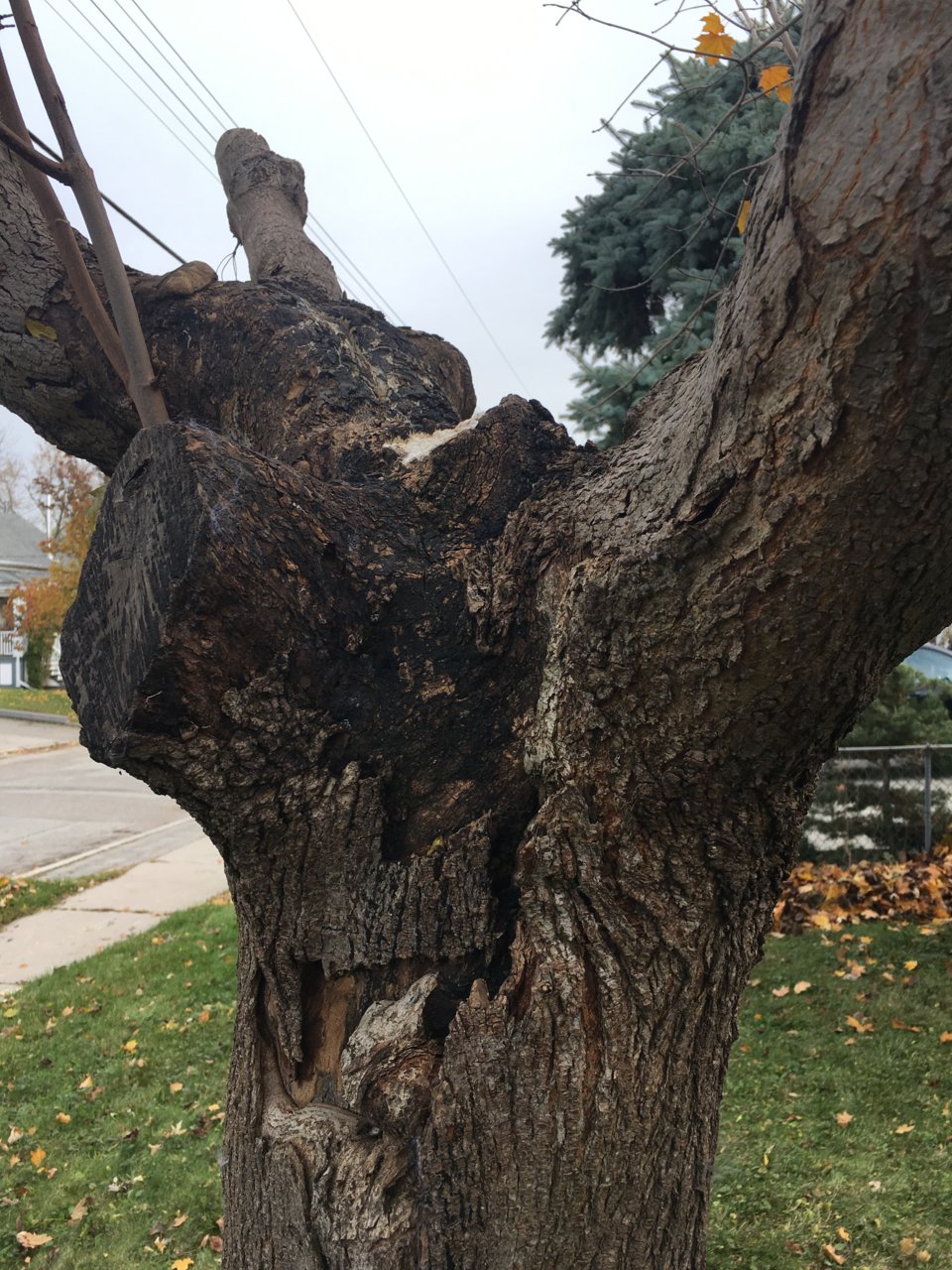 I'm not an expert. My guess is it looks fungus. Maybe there is dead wood due to the large branch that was pruned, and the horizontal surface (and slight V like crotch) traps moisture and promotes rotting.

If this could be moved over to the Toronto Tree thread, there are some pretty knowledgeable people there who may offer better advice.
https://urbantoronto.ca/forum/threads/the-toronto-tree-thread.28771/

Noticed the tree in front of the house has something white growing on it. Anybody have an idea of what this is and should I be concerned?

I'm not an arborist; just a bit of a tree guy. But I did send your pic around my circles; the consensus was you should get a professional in to look at it and it probably requires removal.

There is no question that its rotting at the junction of major branches and the trunk.

Can't say if it will fall imminently, but there is definitely a risk.

I can't tell from your pic if the tree belongs to the City, or yourself.

If its the City's you may be able to get them to inspect/remove at no cost to you.

If its on your property then, I'm afraid its your expense.

For a City inspection, the link is here:

Thought I would post a couple of topical articles on the health of Toronto's ravine system.

For now, I'll let the articles speak for themselves.

However, anyone with questions can certainly post, and I will endeavour to answer!
An environmentally conscientious, libertarian inclined, fiscally conservative, socialist.
W

I am glad you posted those articles. They've slipped my news feed.

Similar questions were asked earlier in the thread, but short of taking an axe to Norwegian Maples all across our ravine system, what can feasibly be done? They out-compete native species and their root systems erode the soil, so 'managing' them out of problem areas seems impractical.

And then there is the political aspect of it. We saw how Rosedale reacted when Toronto Parks and Forestry cut down a few trees in the ravine to allow for a pathway.

Northern Light said:
Beyond that, they can be actively managed (by which I mean killed, either by taking them down outright, or by girdling (think strangling the tree by making small cuts around the base level, that cut off its sap flows).
Removing all of them would be prohibitively expensive and impractical.
The focus should be on removing them from natural areas, where they are already highly invasive AND a threat to a high quality natural area; or where they are just one tree, but in/adjacent to a high-quality habitat.
Some of that does go on now, but not enough.
Forestry is very afraid of angry neighbours/parks users seeing a clear cut in their forest.
Its also expensive. Clearing a Norway-dominant patch of land that is filled w/mature trees will run you between $30,000 - $70,000 per acre.
Click to expand...

Neutrino said:
I recall reading that tree cover is increasing in developed countries across the board. Something about societies becoming more aware/better educated and wising up to the dangers of deforestation/environment damage. EDIT: are there genetically modified salt resistant trees available?
Click to expand...

I think a good portion of this could be the result of older areas that pioneers once opened-up to farming gradually reverting back to forests, for the reason that it wasn't an optimal farming location to begin with. Large swaths of the Land Between in Ontario was conceded for big farming, cleared, made so-so successful farms and farming communities. It only takes a few years for a field to become forest again, and this can be seen around much of cottage country.

Also big agri-business worldwide focusing growth to warmer climates with access to vast volumes of water (think deserts to farms in much of Southern California). With transglobal trade the old mom and pop farms of 100-1000 acres becomes increasingly more likely to become a forest again.


steveintoronto said:
On the Larch:

Larches/tamaracks are the worst. See people use them in landscaping and it makes little sense. Choose an evergreen coniferous, but one that's also a deciduous losing its needles. Hm.

Birches and poplars perhaps could be good street trees, just in that the whitish colour of their bark could be a nice twist.
S

Northern Light said:
However, anyone with questions can certainly post, and I will endeavour to answer!
Click to expand...

Yeah...I knew things were becoming serious, didn't realize the Norway Invasion had the ramifications it does to the extent explained.

Author thinks intervention can 'save the day'. Do you? It has real resonance to the Global Warming debate, and whether we're 'past the point of no return'...
S

WislaHD said:
And then there is the political aspect of it. We saw how Rosedale reacted when Toronto Parks and Forestry cut down a few trees in the ravine to allow for a pathway.
Click to expand...

The Rosedale situ was an issue based on other objectives. I think the result is a monstrosity, and I've been walking the Belt Line and up that hill and clearly remember the old pit and the tiny dinky toys in the bottom, it was so deep (the drugs may have amplified the effect, lol), and the only justification I can see for the evisceration of the hill is for mobility challenged access. To somehow sell it as an improvement over what was there is like praising what the DVP has done for the valley.

I'm a shade away from seventy, still have the muscles to cycle 100 km jaunts, but walking can be a challenge on the lower spine and hips.

And be damned if I'm going to zig-zag my way up or down that hill. I'll go straight up on the grass, thank you very much.

It's absurd watching the young and fit too timid to find their own way on that hill. Wheelchair, walkers and baby carriages, I get it. But to think that the whole hillside hasn't paid a price in the name of 'civility' and 'natural restoration' is to be in total denial.

What's in the old pit sure wasn't there originally. Sorry, denaturing is in the eye of the beholder.

44 North said:
Larches/tamaracks are the worst. See people use them in landscaping and it makes little sense. Choose an evergreen coniferous, but one that's also a deciduous loosing its needles.

Birches and poplars perhaps could be good street trees, just in that the whitish colour of their bark could be a nice twist.
Click to expand...

That was all about the attempt at the Iceland reforestation, not Canada.

I was searching some more on the Icelandic situation...
Click to expand...