In case you missed it.

Another car into the barrier. 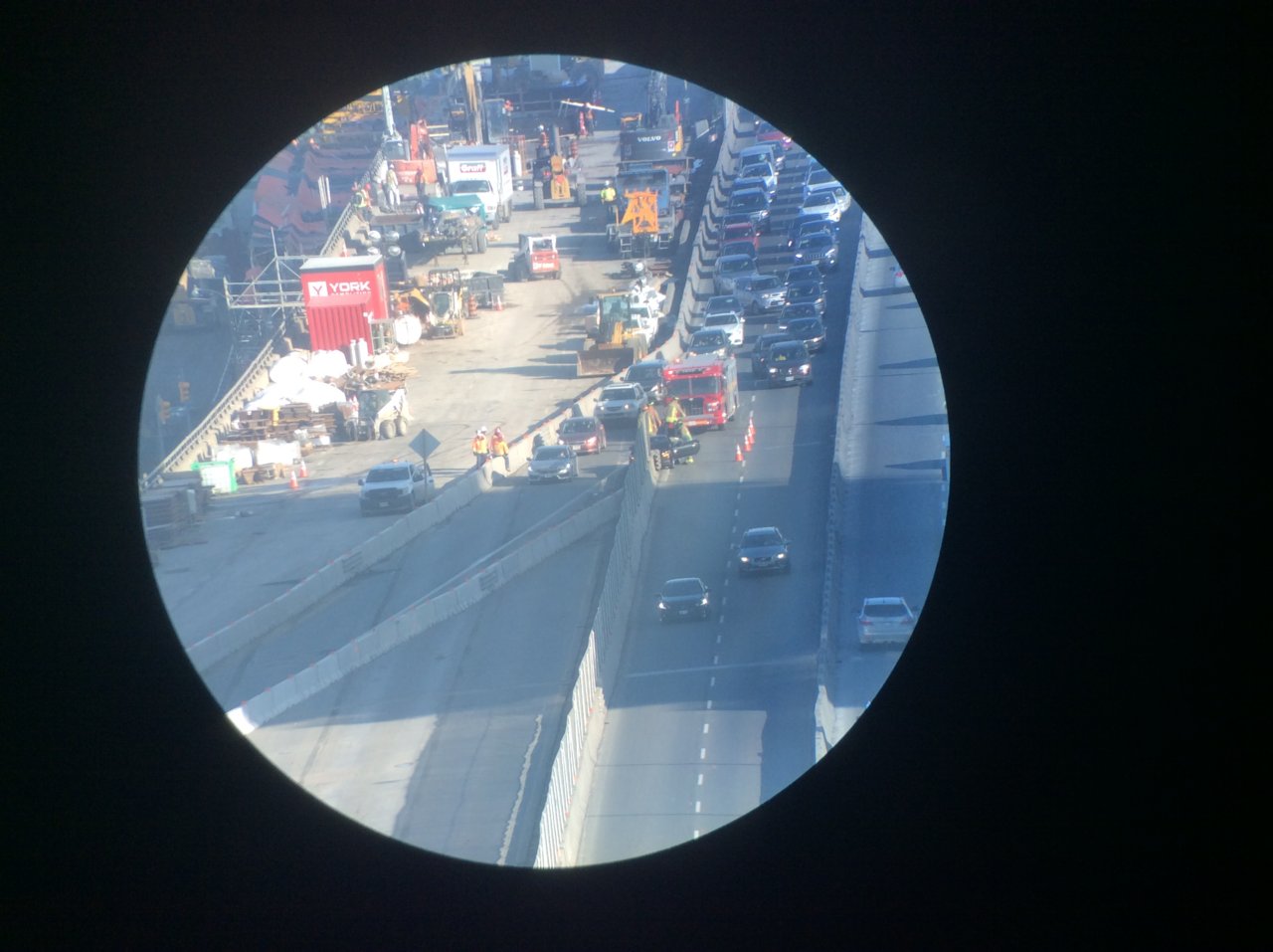 We observed the aftermath of a crash this morning before 7 am. A truck appeared to have driven straight into the barrier. Twitter said the driver was seriously injured. Crews are working there now, see photo below. 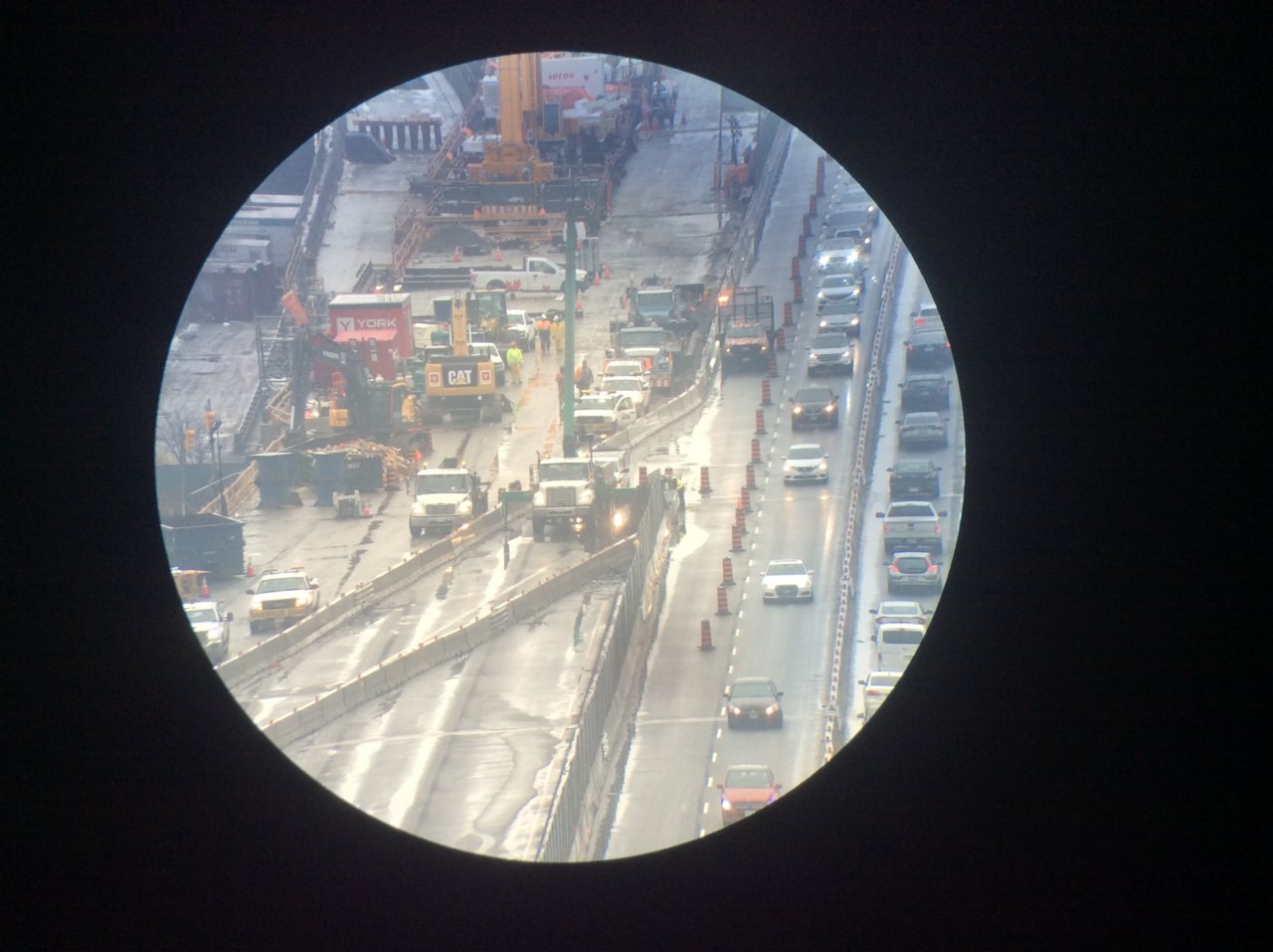 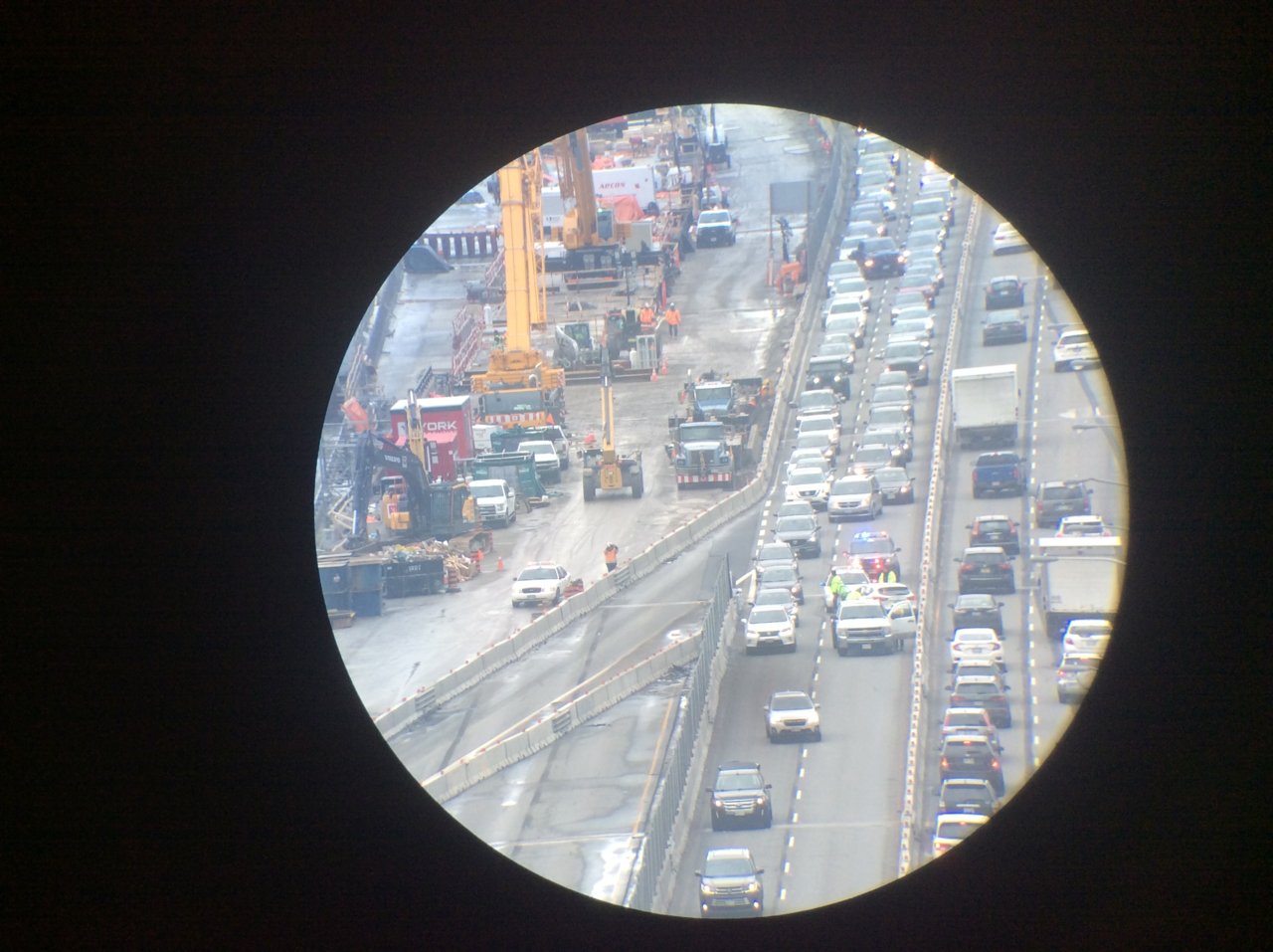 You may have posted this before.
Is the speed limit 80 km/h, and motorists are expected to make a sharp ~30 degree turn over a ~12m length?
I would say that ramp is designed for 40 km/h.
Is there space to the lower left of your photo that they could have had some type of radius (double curve) on that off-ramp (I think your suggest above was just to increase the gore, and not to provide a smooth radius)?
C

There are probably multiple actions could be taken. I suggested a wider opening and pushing back of the barrier and that could allow a smoother turn with reconfigured lines etc. I do not understand why there is so much open space to the west that could be used. I reported this to the city a while back, they told me it was under-consideration. I bet signage is poor but I haven’t driven that portion for a while. And of course a larger collapsible barrier would save injuries. And a slower speed limit would help.
In the yellow circle is where the accidents occur. Within the red area is plenty of room to re configure the barriers. 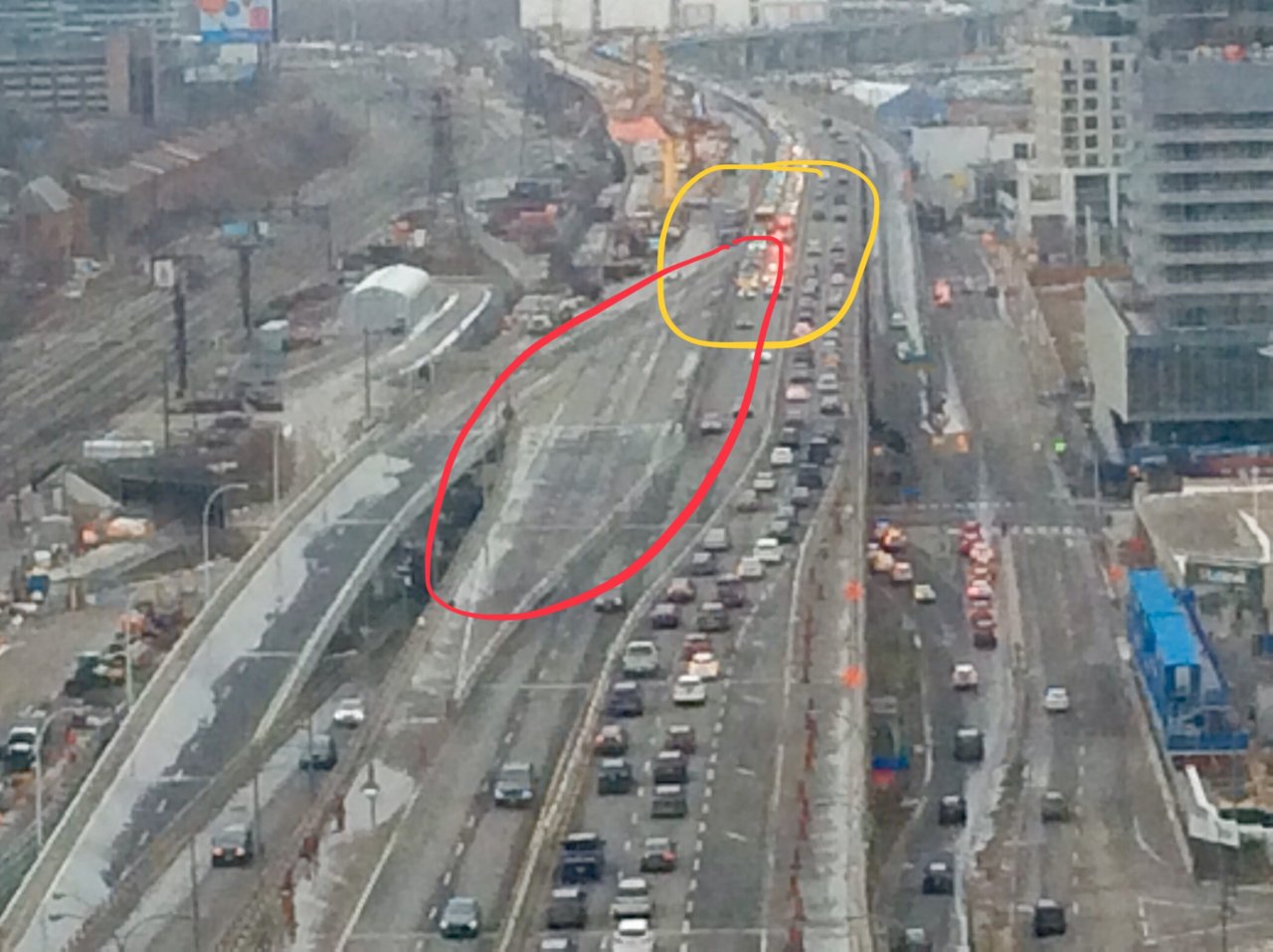 cc46 said:
There are probably multiple actions could be taken. I suggested a wider opening and pushing back of the barrier and that could allow a smoother turn with reconfigured lines etc. I do not understand why there is so much open space to the west that could be used. I reported this to the city a while back, they told me it was under-consideration. I bet signage is poor but I haven’t driven that portion for a while. And of course a larger collapsible barrier would save injuries. And a slower speed limit would help.
In the yellow circle is where the accidents occur. Within the red area is plenty of room to re configure the barriers.
View attachment 227451
Click to expand...

Looking at the situation and using common sense:

Parliament and Lake Shore this morning. 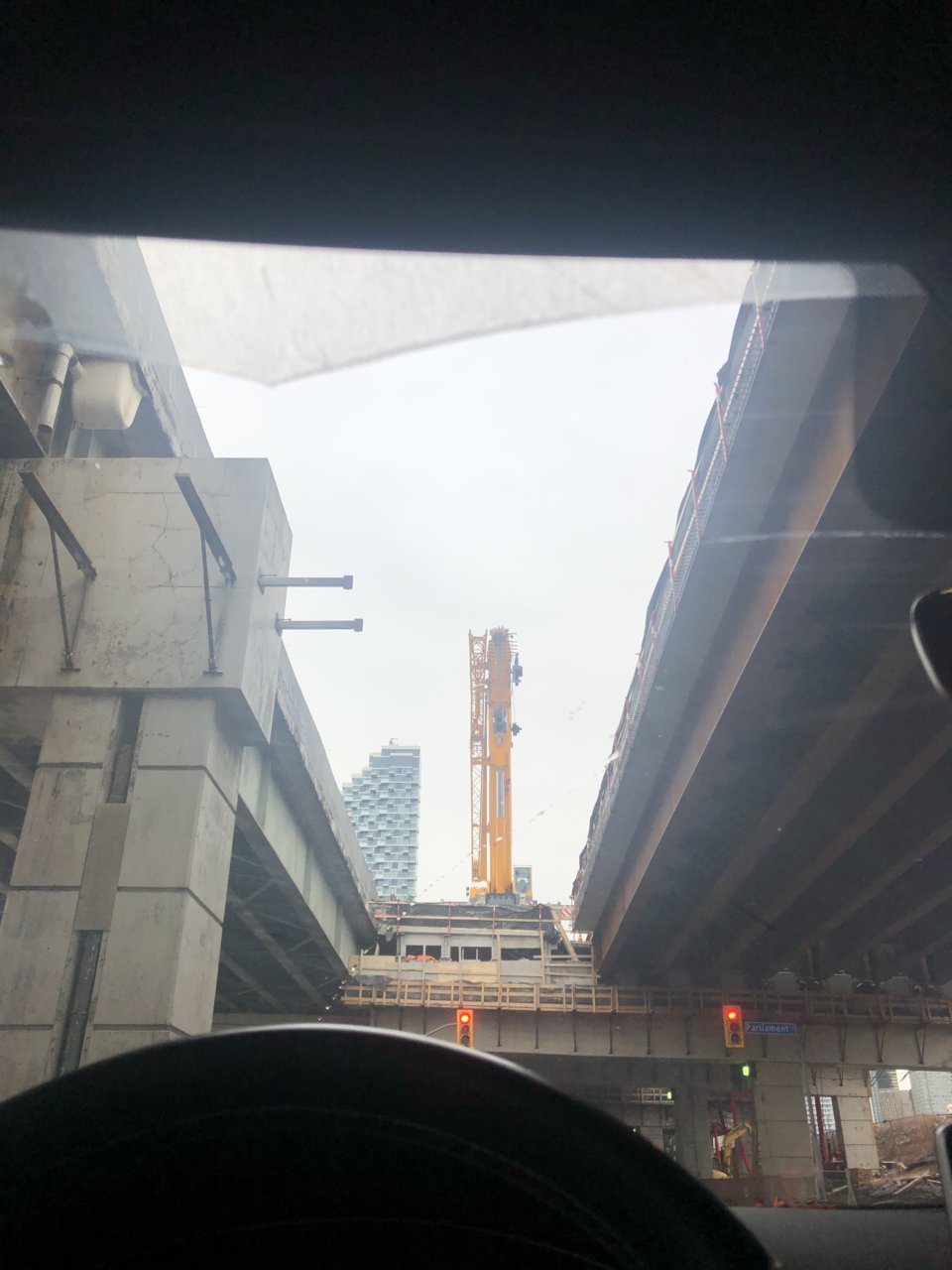 Thanks for breaking the law to share that moment ?
A

Careful now, let's not be showing that to all who clamor for the Gardiner to be razed! 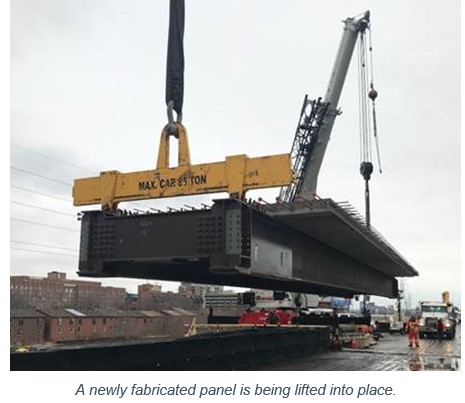 A Novel Plan to Fix One of New York’s Worst Highways: Remove Lanes
The proposal to shrink the Brooklyn-Queens Expressway is the latest effort to reduce congestion that is strangling the city. 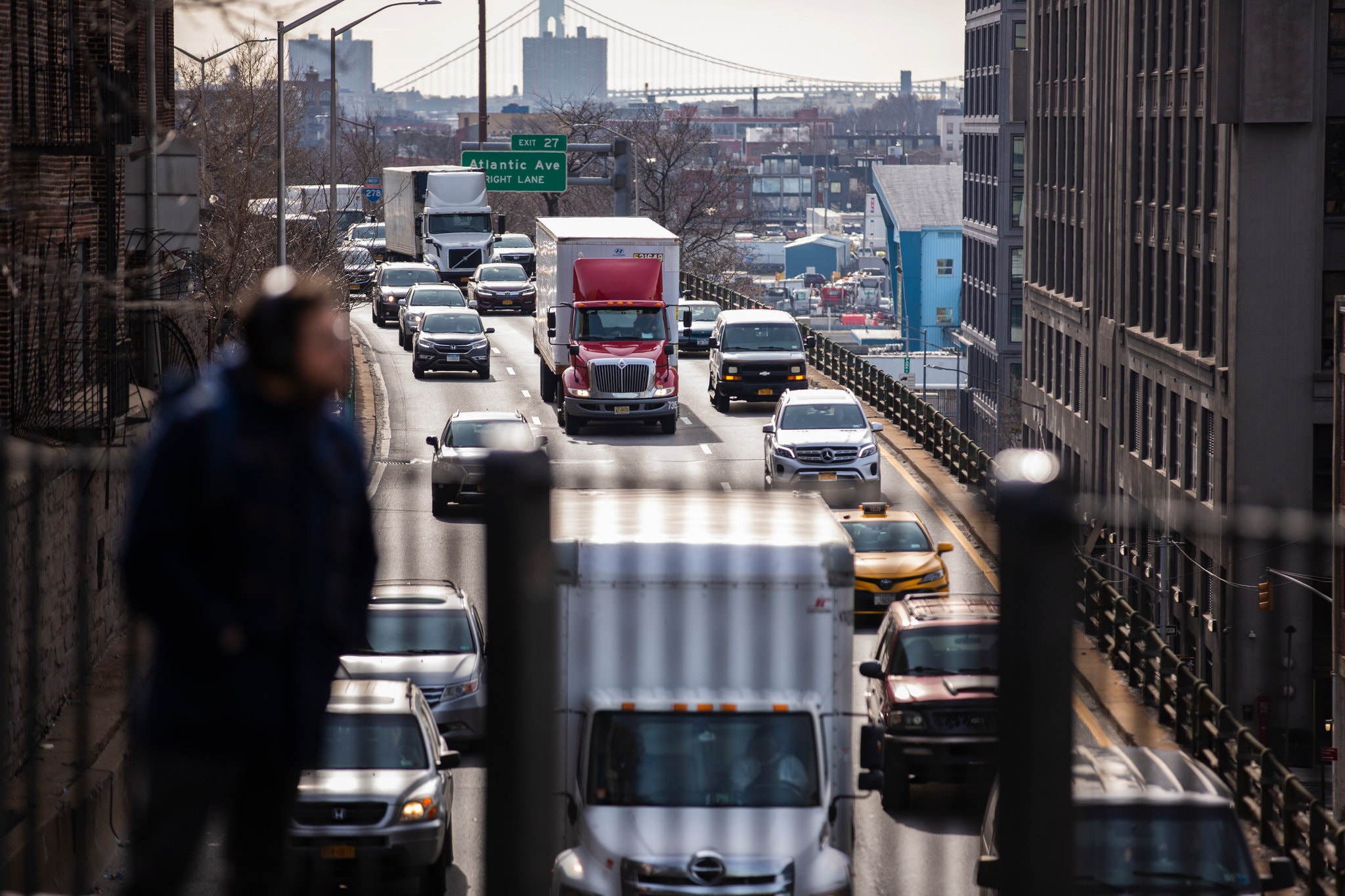 Traffic along the Brooklyn-Queens Expressway. A panel appointed by Mayor Bill de Blasio said the city should consider eliminating two of the six lanes. Credit...Benjamin Norman for The New York Times

As worsening traffic has put a stranglehold on New York, the country’s largest city, it has moved to squeeze out cars, taking away street space to make room for bikes and pedestrians, and all but banning vehicles from a major Manhattan thoroughfare.

Now, New York is considering an even more startling step: eliminating one-third of the lanes on one of the city’s busiest highways.

That is the key recommendation from a panel appointed by Mayor Bill de Blasio that was tasked with coming up with a rescue plan for a key stretch of the Brooklyn-Queens Expressway, which is rapidly falling apart under the weight of 153,000 vehicles a day, more than three times what it was built to handle.

Without an overhaul, parts of it could become unsafe and unfit for traffic within five years.

The idea of shrinking the highway to four lanes from six is a remarkable shift for the city, which, like the nation, has been shaped by a car-centric culture and is now wrestling with the consequences, including gridlocked streets, polluted air and rising pedestrian and cyclist deaths.


Some elected leaders and policymakers are increasingly recognizing that the future health of the city depends on making it less accommodating to cars.

The notion of eliminating highway lanes is realistic because of another ambitious effort to move cars off the road: congestion pricing. Next year, New York will become the first American city to charge a fee to drive into the busiest areas of Manhattan.
Click to expand...

The panel’s recommendation would still have to be adopted by the city’s Transportation Department.

Olivia Lapeyrolerie, a spokeswoman for Mr. de Blasio, said city officials were reviewing the findings. “This is a thorny problem that defies easy solutions,” she said. “The external panel has put fresh ideas on the table.”

The panel focused on repairing a 1.5 mile section of the B.Q.E., which includes a series of 21 concrete-and-steel bridges over local roads, and is controlled by the city. The project is estimated to cost more than $1.7 billion.

If the panel’s recommendation to reduce lanes is adopted, it would be the first time in decades that a major highway in the city would be made smaller, and it would run counter to established traffic management policies to expand highways in response to greater demand, according to transportation experts.
Click to expand...

But expanding roadways, rather than easing congestion, leads to more traffic, experts say, because it attracts more cars.

“It’s just not in the DNA of most highway agencies to build smaller,” said Samuel I. Schwartz, a transportation consultant who advised the B.Q.E. panel.

“We’ve gone through a 70-year period of adding and widening but this is a failing strategy. It’s like solving the obesity problem by loosening your belt.
Click to expand...

But some drivers and community leaders criticized what they described as the latest unfair effort to penalize drivers.

“I don’t think it’s a crime to own or drive a car,” said David I. Weprin, a Democratic state assemblyman from Queens who occasionally uses the B.Q.E.

Aside from advocates who promote public transportation and bicycling over cars, some officials have also raised the need to rethink how streets are used.

Scott M. Stringer, the city comptroller and a likely candidate for mayor next year, has called for a comprehensive review of the city’s highway network with the aim of scaling it back.


Simply repairing aging highways will “perpetuate a car culture that isn’t working” and is a “short-term band-aid to our long-term infrastructure needs,’’ Mr. Stringer wrote in an opinion piece published in The Daily News.

“When you get rid of highways, people find other ways to get around,” Mr. Stringer said.

The B.Q.E. panel, in a report outlining its recommendations, urged the city to immediately reduce the traffic on the highway by closing two lanes — one in each direction — to make it safer and extend its last remaining years.
Click to expand...

Though the panel did not offer a permanent solution, it suggested that the entire B.Q.E., which stretches for about 18 miles, could be reimagined to carry fewer cars, especially with the advent of congestion pricing.

In cities around the world, congestion pricing did decrease car traffic, though in some places it rose again.

“The reality is there must be a B.Q.E. and there has to be a place for trucks to travel, but we need to limit the trucks and we need to cut down the traffic,” said Carlo A. Scissura, the chairman of the B.Q.E. panel and the president and chief executive of the New York Building Congress, a trade association for the building industry.

The panel suggested that reducing lanes and using other strategies such as diverting traffic to less congested routes in Brooklyn and expanding bus and ferry service could reduce the traffic volume on the B.Q.E. by at least 15 percent, to 125,000 vehicles a day.

But Mr. Weprin said taking away lanes would make it harder for people who have to drive to work or appointments because they live in neighborhoods outside of Manhattan, where public transit is sparse. “It’s pretty bad with six lanes, I can’t imagine what it would be like with four lanes,” he said. “It would be a disaster.”
Click to expand...

The panel also recommended preserving the Brooklyn Heights Promenade, a cherished pedestrian walkaway with panoramic views of Manhattan that sits atop the B.Q.E. and is suspended over traffic by an unusual triple-cantilever structure.

The panel said the promenade should remain open during the B.Q.E. repairs, rejecting an earlier plan by the city to close the promenade and build a temporary roadway over it where traffic would be diverted while work occurred below.

The fate of the promenade has spurred a flurry of ideas for fixing the B.Q.E., including tearing it down entirely. Nearby residents have long complained about congestion, pollution and noise and vibrations from cars hitting potholes.

City transportation officials have warned that without overhauling the 1.5 miles between Atlantic Avenue and Sands Street, they would have to restrict trucks by 2026 to reduce the weight on the highway.

But recent traffic data included in the panel’s report shows that the highway is deteriorating faster than initially believed, partly because of the volume of trucks exceeding the 40-ton federal weight limit on the highway.
Click to expand...

This stretch has long been dreaded by drivers and has a particularly high crash rate, in part because there are narrow lanes, no shoulders and no acceleration lanes to merge into traffic.

Kathryn S. Wylde, a member of the B.Q.E. panel who is the president and chief executive of the Partnership for New York City, an influential group of business leaders, said reducing the number of traffic lanes would make the highway safer and also encourage drivers to seek other travel options.

“We have to try to change behavior,” she said. “We can’t sustain that level of traffic on a major thoroughfare that is so important to our economy.
Click to expand...

A Novel Plan to Fix One of New York’s Worst Highways: Remove Lanes
The proposal to shrink the Brooklyn-Queens Expressway is the latest effort to reduce congestion that is strangling the city.


Traffic along the Brooklyn-Queens Expressway. A panel appointed by Mayor Bill de Blasio said the city should consider eliminating two of the six lanes. Credit...Benjamin Norman for The New York Times
Click to expand...

That's essentially what's happening to the Gardiner. The new section will only be 4 lanes total, down from 6.

Tuscani01 said:
That's essentially what's happening to the Gardiner. The new section will only be 4 lanes total, down from 6.
Click to expand...

It isn't technically going to be a lane reduction, they are simply moving the gardiner/lake shore split further west. Right now is splits right before the curve, now the Lake Shore ramps will exit much sooner and the DVP connection will continue further as a 4 lane connector, just as it is today. Those taking the Lake Shore ramp to the east end will lose about 1.3km of elevated expressway as a part of the project, reaching grade around Cherry Street instead of around Booth Avenue.

Not sure if this land clearing is for expanded Go Train storage, Gardiner Hybrid, both or other. 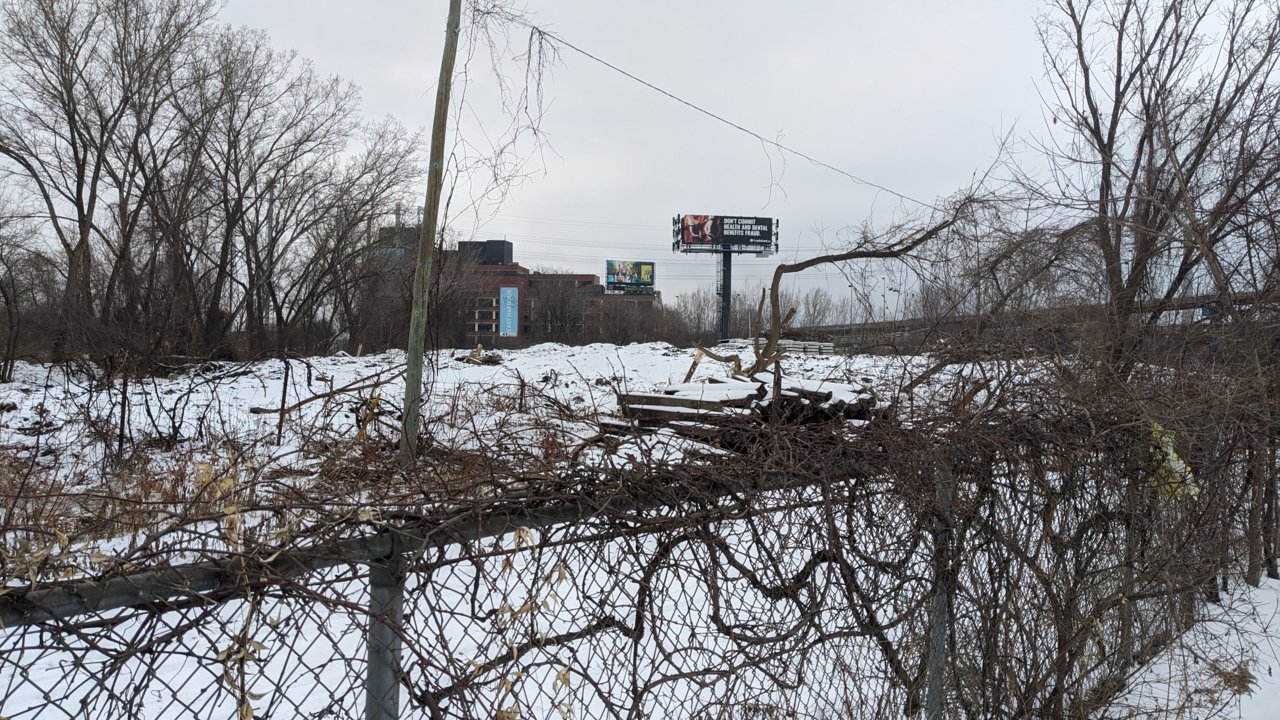 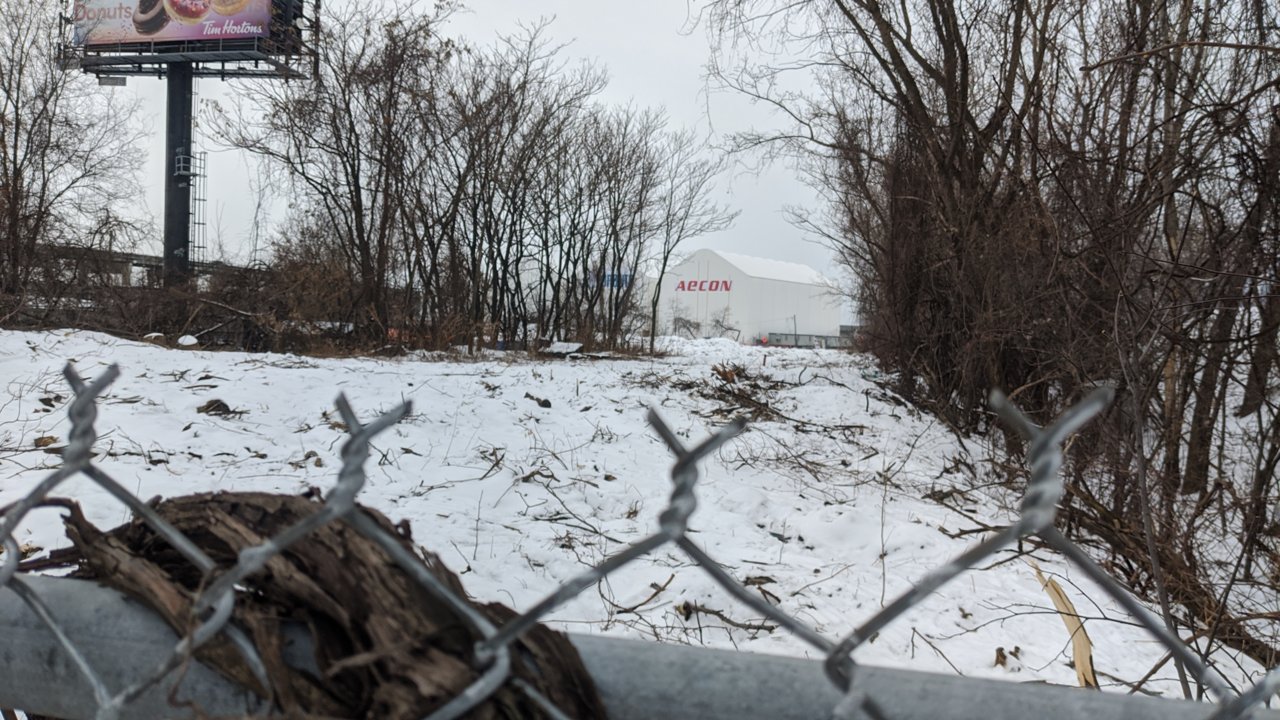