lenaitch said:
By your attached graph, it has been steadily dropping since 1998, so back to Chretien. I'm sure criminologists have all sorts of views on what impacts crime rates, such as employment, the economy, etc. I tend to take the probably overly simplistic view that it is largely cyclic over the long term.
Click to expand...

Your right, it had gone down before as well. Using the data (full years in power for PM):
This looks like a trend to me.

BurlOak said:
Your right, it had gone down before as well. Using the data (full years in power for PM):
This looks like a trend to me.
Click to expand...

Paul Martin will be miffed that he has been overlooked. Not a statistician, but when one trend line covers 14 years and the following one only 4, I'm not so sure.
K 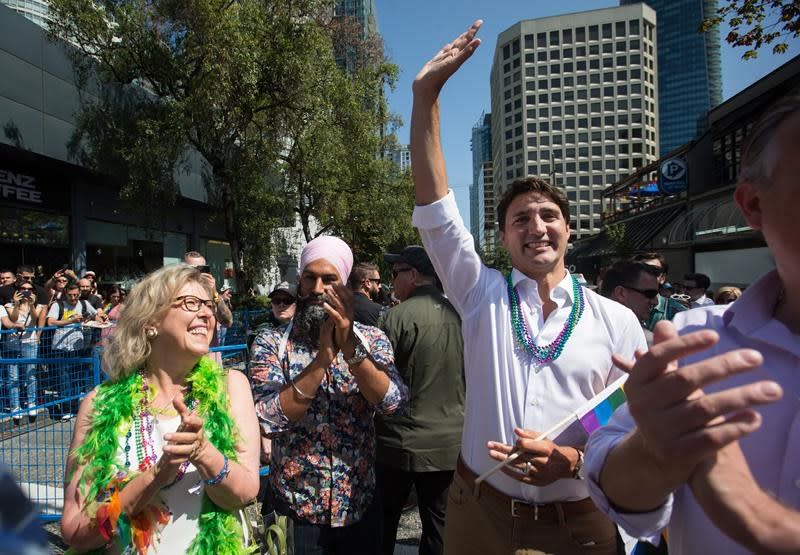 VANCOUVER — Prime Minister Justin Trudeau extolled on the importance of unity as he marched in Vancouver's annual Pride parade with two of his political rivals on Sunday.The prime minister took the opportunity to offer his condolences to the victims of two mass shootings that left a combined 29...

Singh, May and Trudeau marched together in the Vancouver Pride parade. I guess Scheer didn't get approval from his SoCon buddies.
Click to expand...

I'd say it's a tactical error. But I honestly doubt that attendance at Pride moves elections at all. How likely is anyone who cares about Pride to vote Conservative anyway?

It goes beyond the parade. While the CPC is unlikely to go full SoCon and crack down on LGBT rights if elected, they still need more people like John Tory and Patrick Brown making genuine outreach to the community. Scheer isn't that person at all.

I'll be honest. I just don't think the average voter cares about the social conservative stuff anymore. It's the boy who cried Wolf.

The Liberals fearmonger about the Conservatives doing this every single election. And it doesn't go anywhere because once in power, the Conservatives realize they like being there. They'll tinker with sneaky shit around the edges. But at the end of the day, they are aware enough to know opening up any of these issues would put them out of power quickly. I find abortion particularly laughable. Does anyone seriously think pissing off half the voters in the country is a viable path?

That interview actually makes him look better to me. He's able to separate his personal beliefs from his job. He's pledging not to reopen these issues. And he gets that Canadians have moved on. I get that might not reassure a Liberal. But I would bet there's a lot of voters who are okay with his take our closer to that themselves.

Kellie Leitch is sure being quiet before she leaves office. The opposite of Brad Trost, who is full SoCon now since he has nothing to lose.
Death to Videodrome! Long live the new flesh!

BurlOak said:
It looks like Vancouver Pride, like Toronto's Pride - has a number of reasons to boycott them.

Conservatives boycotting Pride parades. Wow. Crazy. I never could have imagined that.

"Cavey, who is gay himself, has marched in two prior Pride Parades in the city and along with his EDA, has been a longtime advocate for LGBTQ+ rights. "

A lot of the pride parades are getting taken over by extremists leftist elements though.
N

Jasmine18 said:
A lot of the pride parades are getting taken over by extremists leftist elements though.
Click to expand...

Its a parade. ie. Its people walking along a road.

Exactly how extreme and inflammatory is this walking?

I say this as someone who doesn't like parades, I don't even like the Santa Claus Parade! LOL I just have no ability to comprehend other people's fascination with other people walking; as if that were abnormal and most people swam everywhere; but I digress.

How does this extremist walking manifest itself?
An environmentally conscientious, libertarian inclined, fiscally conservative, socialist.

Jasmine18 said:
A lot of the pride parades are getting taken over by extremists leftist elements though.
Click to expand...

What exactly are these "extremist leftist elements"? Please elaborate and provide some helpful examples because I really have no idea this even means.
...
J

Irishmonk said:
What exactly are these "extremist leftist elements"? Please elaborate and provide some helpful examples because I really have no idea this even means.
Click to expand...

Not to take a side, but I would say BLM would be one possible instance, especially where they essentially forced the parade to stop until their demands were met (and then Pride Toronto's director was then conveniently forced out after sexual abuse allegations popped up).

In many Pride organizations, there's also been an ongoing battle between intersectionality/ niche interests and the organizational boards, and contestation over the presence of law enforcement in the parades- all questions on if Pride parades should be more political in their nature, or remain as universal acts of celebration.

Pride Toronto is apologizing for a land acknowledgement sign displayed over the weekend after hundreds took to Twitter to call out the organization for erasing Indigenous people, and failing to properly recognize the origins of the territory on which the festivities took place.

The organization issued a statement on its Facebook page Monday, a day after images of the sign surfaced on social media.

Many pointed out the sign did not refer to any Indigenous communities or treaties that Toronto falls under.
Click to expand...

At the crux of the conflict is a difference of opinion on whether the event is meant to be a broad celebration, complete with corporate sponsors and government support, or stick closer to its protest roots.

The divide led to uniformed officers being banned indefinitely from marching in the parade following a narrow vote in January. That came after Pride Toronto, which runs the parade, invited police to participate this summer following a ban in the last two years.
Click to expand... 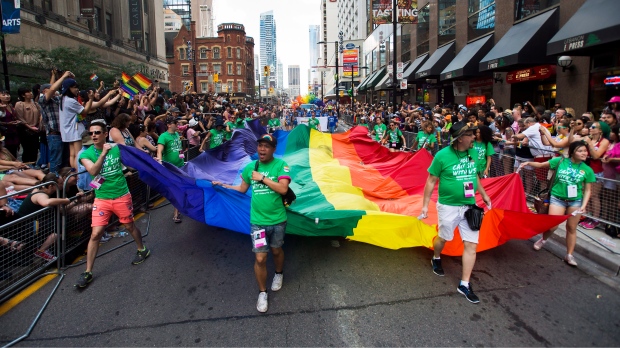 Toronto's Pride parade is set to take over the city's downtown core this weekend -- a rainbow-hued culmination of tensions that have simmered for months between some in the LGBTQ community and the organizers of the annual event.

"I understand that Pride began as a sexual liberation movement against police and state violence, and I understand that somewhere along the way, the organization either forgot or began to actively ignore this history," Edghill said in a statement that was also posted to social media.

Edghill went on to explain that their role on the board of directors forced them to take on fiduciary responsibilities that "required me to put the wellbeing and survival of the organization first, and that if I did not, if we did not, I was told the consequences could be severe."
Click to expand...

The internal rebellion against the board of directors was led by the No Pride in Policing Coalition. The group formed last fall, after the board chose to invite Toronto police to apply to re-join the festival for 2019. Uniformed officers last marched in the parade in 2016, when a protest by Black Lives Matter kicked off a years-long debate about the place of police in such an event.

The decision to invite police back — which was announced at an October press conference attended by Nuamah, Toronto Mayor John Tory and Toronto police Chief Mark Saunders — was never put to a vote. The force eventually rescinded its application after fierce blowback from some in the LGBT community.
Click to expand...

The Pride Toronto executive director said the organization has been through a difficult 12 months, but also noted that it received overwhelming support from Toronto and the wider Canadian community.

"We had a financial crisis but we've also clearly spoken of our crisis in confidence in policing in the city," Nuamah said.
Click to expand... Postmedia Is Taking A Turn (Further) To The Right