Why does a moped need a motorcycle license, insurance and a DOT helmet while eBikes require none of this?

Is it solely because the moped can exceed 32 kph?
https://twitter.com/AdmiralBeez
Trending #BlockedInToronto on Twitter.
S

It requires insurance and helmet because it is a motorized vehicle and hence can cause serious physical injury if in an accident to both the driver and pedestrian as well as being combustible. The 32km/hour rule was based, at least originally, on the fact that that is roughly the fastest speed a bike can go downhill on your average road decline. The rule in BC is the same. Where BC is not the same is that motorized mopeds and scooters 49cc or less only require a standard drivers license which is a HUGE part of the reason why they are many scooter rental places in tourist areas and they are more popular amongst students as basic transportation. They are not legal on roads with speed limits over 60km/hr which restricts them to urban transport which is what they were designed for.

I hate it when these asshole moped/e-bike drivers hijack the bike lanes.
S

The e-bikes are allowed to use the bike lanes because they are legally bicycles. Mopeds & scooters are not suppose to as they are legally a motorized vehicle. This is also why e-bikes can legally park anywhere a bike can including the sidewalk where as mopeds and scooters can only park where a car can.
R

Towered said:
I hate it when these asshole moped/e-bike drivers hijack the bike lanes.
Click to expand...

I dont mind, as long as they signal properly etc and drive safe.

We need to encourage people to get out of their cars as much as we can.

Using an ebike that must stay in the road and cant bypass cars is kind of a disincentive.
T

Towered said:
I hate it when these asshole moped/e-bike drivers hijack the bike lanes.
Click to expand...

Where else do you expect them to ride?
S

When they use the bike lanes {as you also see in BC} many people think they are cheating and this is especially true with the e-bikes that look more like a small scooter than bike. They are however bicycles in every sense of the word and hence can use bike lanes legally.
S

While electric scooter result in less physical exercise, they have a very important advantage over regular bikes...……………….they have consistently shown themselves to be MUCH safer than regular bicycles with far fewer accidents and fatalities.

This is particularly true with the e-bikes that look like a motor scooter. There are several reasons for this: First, they are far more likely to abide by the rules of the road and don't engage in the "LA stops" that most cyclists do where instead of coming to complete stops at stops/lights they simply slow down, check both ways and then continue. Second, many are equipped with rear stop signals and indicators. Third, because they can very quickly accelerate to 32km/hour in busy traffic they are less likely to have cars swerve around them to get ahead of them. Fourth, and probably most importantly, because they look like a scooter they are "perceived" by other drivers as being another motorized vehicle on the road and hence the other drivers "perceive" them as being similar to your regular Vespa or motorcycle and this is especially true because they have lights and indicators.

Many commuters far prefer the e-bikes that look like scooters due to these reasons as well as being able to arrive at work or school without sweating and smelling like a pig. Many of the e-scooter owner also have regular bikes but use the e-scooter for commuting and the regular bikes for leisure and excerise.
Last edited: Jul 30, 2019
R

ssiguy2 said:
While electric scooter result in less physical exercise, they have a very important advantage over regular bikes
Click to expand...

You won't get the average person to use a regular bike for trips greater than 10km. E bikes will incentivize people who drive in from a distance to leave the car at home.

People who bike downtown short distances lessen transit overcrowding, most wouldnt have driven that distance to begin with.

e-scooters, e-bikes, pedelecs -- this can get a bit confusing for some.

Not to be confused with Lime scooters or Bird scooters -- shared electric kick scooters -- whose arrival I am looking forward to, having ridden them in 3 cities I've travelled to.

I have no problem with pedelecs & electric kick scooters in protected bike lanes and multiuse trails (with speed restrictions).
Those motorcycle-looking and vespa-looking scooters and bikes are a bit overkill to be allowed though.
-- Follow @MDRejhon on twitter

mdrejhon said:
e-scooters, e-bikes, pedelecs -- this can get a bit confusing for some.

Not to be confused with Lime scooters or Bird scooters -- shared electric kick scooters -- whose arrival I am looking forward to, having ridden them in 3 cities I've travelled to.

I have no problem with pedelecs & electric kick scooters in protected bike lanes and multiuse trails (with speed restrictions).
Those motorcycle-looking and vespa-looking scooters and bikes are a bit overkill to be allowed though.
Click to expand...

I am equally confused with the array of 'motorized vehicles' appearing on the market. From general appearances only (I'm not involved with use, regulation or enforcement), I often see some very motorcycle-looking vehicles being operated (often very poorly) on roads, sidewalks and trails by people wearing either no helmet or a bicycle helmet. In an era of innovation, I suppose it's not surprising that regulation lags behind.

Should be classed in the same "motorization allowance" category as motorized wheelchairs (and assistive electric scooters, most commonly used by the elderly) with speed restrictions preventing them from becoming faster than a regular bicycle at moderate speed, and no faster than a fast running sprint, typically about 15 or 17 kilometers per hour speed limiter, although many scooters have been programmed with various limits like 20kph or 25kph in a geofenced way.

Kitchener-Waterloo standardized on 20kph for their Lime electric kick-scooter trial, and permitted them on-campus (university) and a specific multiuse trail as a trial since .... somehow, crazily -- Ontario doesn't allow these on roads (yet). That should be fixed, stat.

Many cities I have visited has started to categories the new mobility options. Legislation can force providers (e.g. bikeshare, scootershare) to build in the electronic speed limiter or even geofenced speed limiters (faster speeds on road networks, slower speeds on offroad multiuse/cycle trails) which Lime/Bird already supports geofenced speed limit rules enforced on them by municipalities. That reduces danger to pedestrians who will be more injured by being hit by a bicycle, than being hit by a speed-limited electric kick scooter.

I've seen my electric kickscooter rentals in other cities (Bird, Lime) successfully speed-limit themselves to 17kph in pedestrian-heavy areas, and I'm able to leap off them to a running stop safely too. Renting is just a 3-second scan from my smartphone on any random scooter lying around, and I can park them pretty much anywhere near a bike rack or spaces between parking meters (if allowed) -- rental responsibility instantly ends when I park the electric kick scooter. All the scooters are GPS trackered so the app tells me nearest unused scooters. 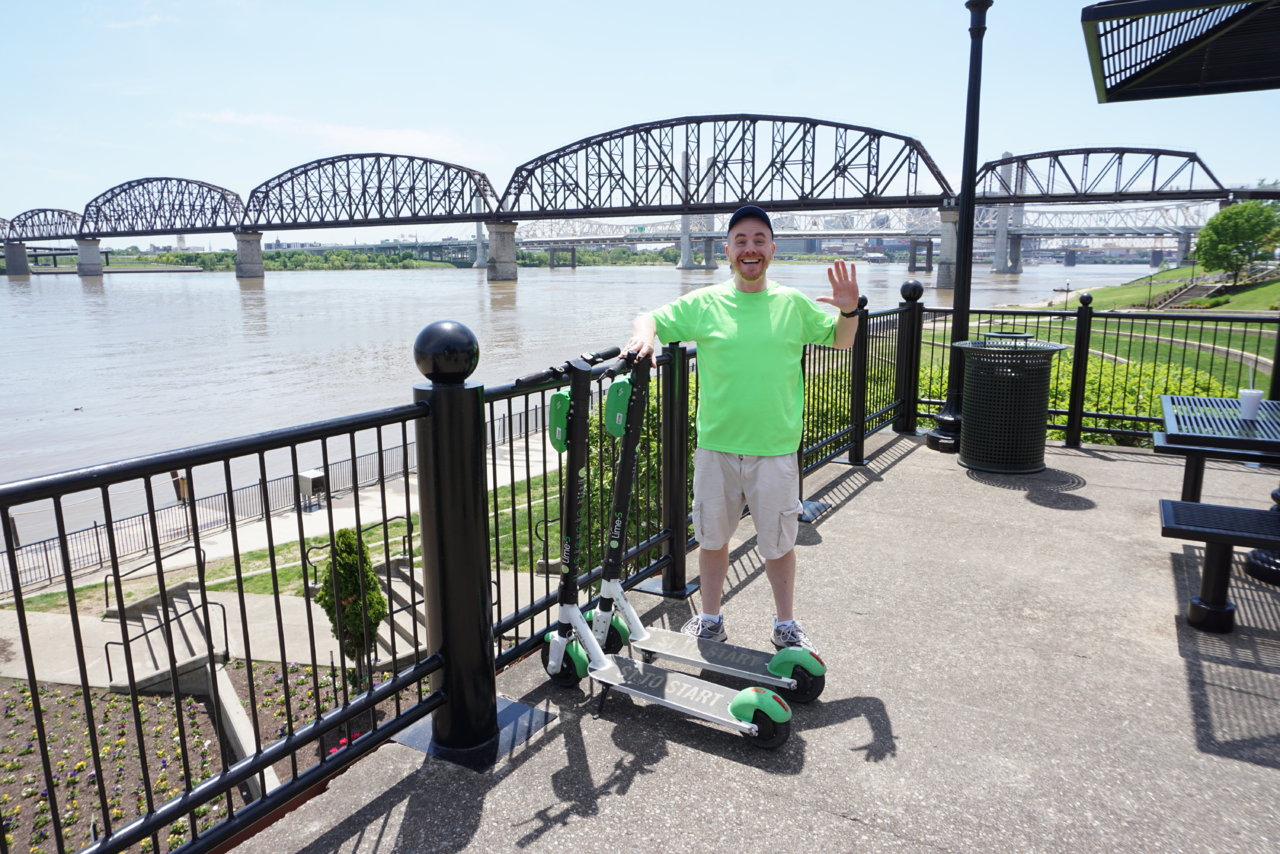 Picture of me using these electric kickscooters. In this specific city, they were preprogrammed to a ~23kph speed limit; some other cities limited to ~17kph.

It is simply because we managed to squeeze Tesla Gigafactory batteries (common now-cheap 18650-format cylindrical lithium -- 65mm x 18mm) inside bike frame tubes & inside a scooter-bottoms -- that we have ultralightweight electric vehicles, some of which weigh less than a full school backpack!

There are now already precedents of new municipal rules that accomodate these new mobility categories, to properly define "pedelecs" as bicycle-looking ebikes that only boost only when pedalled -- and electric kick scooters that have weight and speed restrictions (e.g. lighter than a university backpack). I think this is reasonable to permit those anywhere regular bikes can go, though some cities permit them too high a speed limit (e.g. 25kph in pedestrian-heavy areas is not a good idea). Properly speed-limited, those new electric kickscooters are less threatening to pedestrians than a regular bicycles on multiuse trails.

Never in humankind we had tiny electric vehicles lighter than a bicycle -- that has enough battery range to propel a human all the way from Toronto downtown almost all the way Oakville on the same battery charge -- and capable of speeds similar to a fast pedal. If you so desired.

Such impressive new mobility categories, made possible by the commoditization of new battery technologies, had never needed to be factored into city planning -- and now needs to be, stat.

That said, fast, heavy, moped-looking e-bikes definitely should NOT be allowed on offstreet/multiuse trails used by pedestrians. I currently grudgingly tolerate them in relatively-lightly-used bike lanes in Hamilton though would be questionable if we reached copenhagen-style bike traffic (even simply University College St summer bike traffic).

About licensing -- some cities require a driver license and age minimum (18), while others don't require a driver's license. Basic scooter training (15 minutes) is however recommended to allow scooter users much of the basic etiquette. It's a question that blurs the boundary between licensed and non-licensed motorized vehicles.... No license is needed to ride these electric kickscooters in many other cities.
Last edited: Aug 2, 2019
-- Follow @MDRejhon on twitter

IMO, if it's for use on the road and is not pedal assist, it should be classified as a motor vehicle and require license and insurance. Same as if I stick a gas engine onto my bicycle https://www.bikeengines.com/
https://twitter.com/AdmiralBeez
Trending #BlockedInToronto on Twitter.
R

'Removing the pedals makes it an illegal vehicle'

It seems like they are just tacking on charges because he was DUI, but still sounds funny to me how serious taking pedals off something is.

'Removing the pedals makes it an illegal vehicle'

It seems like they are just tacking on charges because he was DUI, but still sounds funny to me how serious taking pedals off something is.
Click to expand...