Hurontario Street runs from Mississauga north to Collingwood. The southernmost and northernmost stretches followed (and still follow in part) Highway 10 and former Highway 24 respectively. The middle section, from Orangeville to Glen Huron, is bypassed, though it still exists, broken into sections, with the split from Hwy. 10 occurring at Highway 9. The first bypassed section is visible near the centre of this Google satellite image, south and east of the Orangeville Reservoir, partially in the Island Lake Conservation Area: 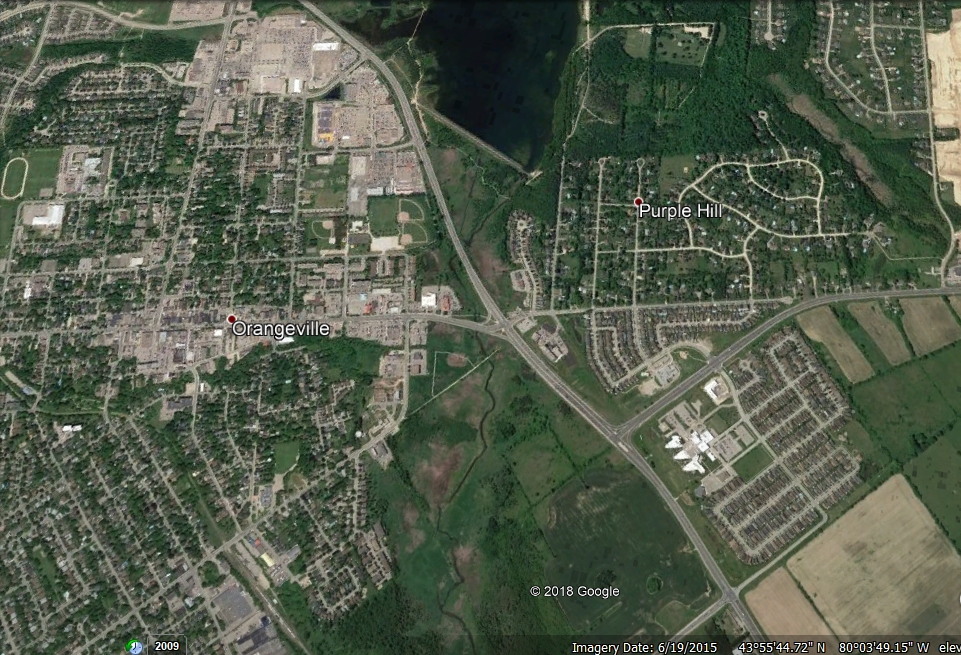 This Street View grab looking north shows the location where Hurontario and Hwy. 10 part company at Hwy 9, with 10 continuing on north alone. The former course of Hurontario (and until the 1960s, until a bypass was constructed, 10 as well) can be seen bearing off to the right, and is now vacant land, still marked with the hydro poles that lined it. The original Hurontario actually continued south of this point, running about 100 feet to the right of the blue pickup before merging with the baseline: 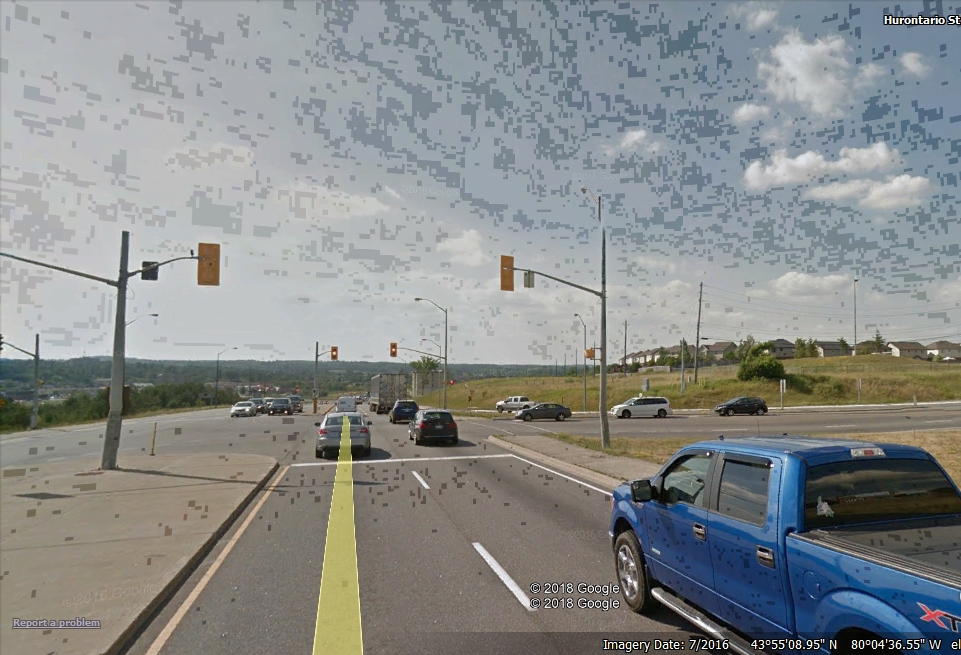 Looking south from the first stub of the bypassed Hurontario, robbed of its role as an important thoroughfare, here only provides access to a hotel: 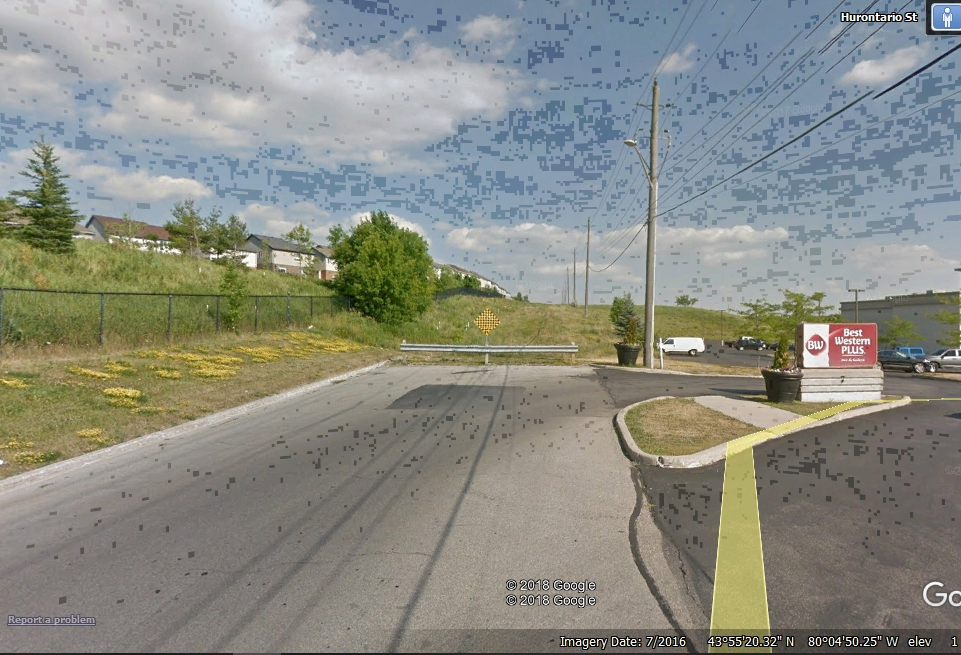 Looking north, across Buena Vista Drive; Hurontario St. bends slightly right to follow a strict north-south alignment at the concession road survey boundary. Buena Vista Dr. was the former route of Hwy. 9. Before the Hwy. 10 bypass was built (visible on the left), 10 turned left here to run concurrently with Hwy. 9 into downtown Orangeville via Broadway before turning north again. Given this was a significant historic crossroads, dating back to the pre-highway era, one may wonder why this minor intersection isn't Orangeville's "four corners": 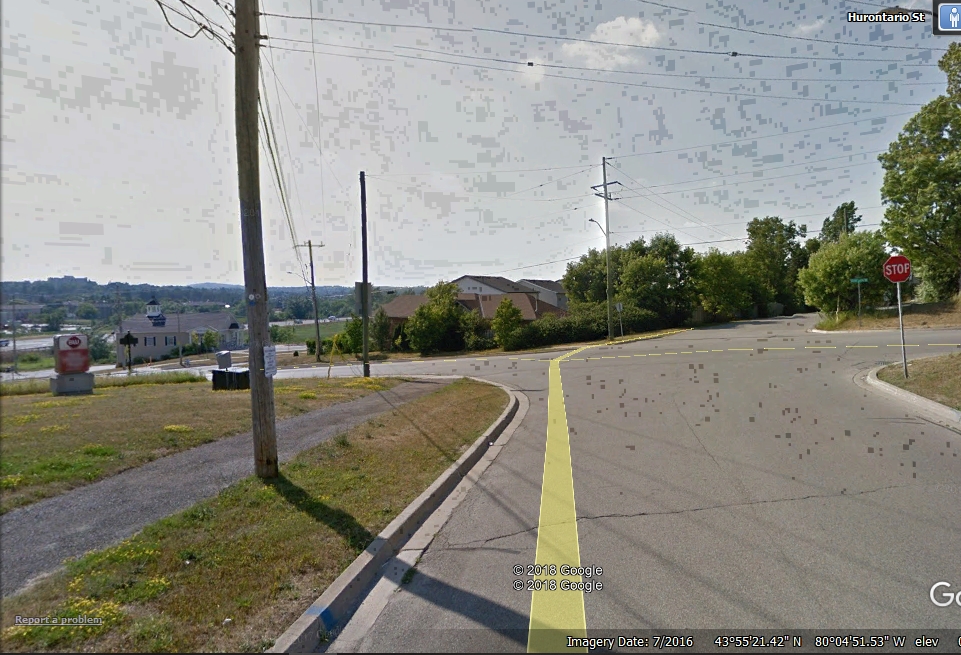 North of Buena Vista, Hurontario is a quiet residential street: 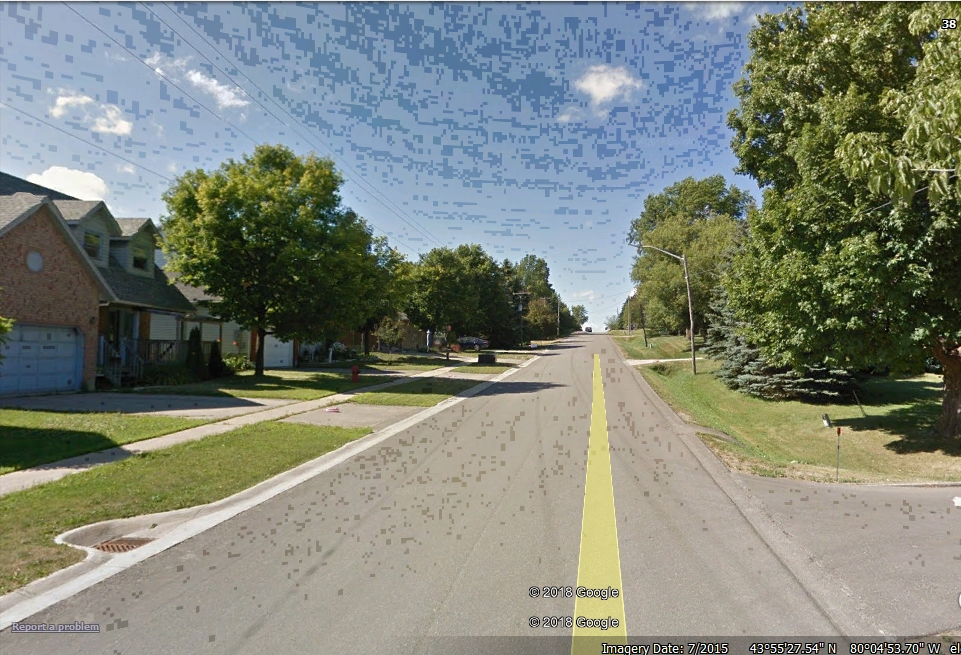 Further north, Hurontario St. is broken by the manmade Orangeville Reservoir. Part of it was drowned by the reservoir but the submerged portion is still clearly visible: 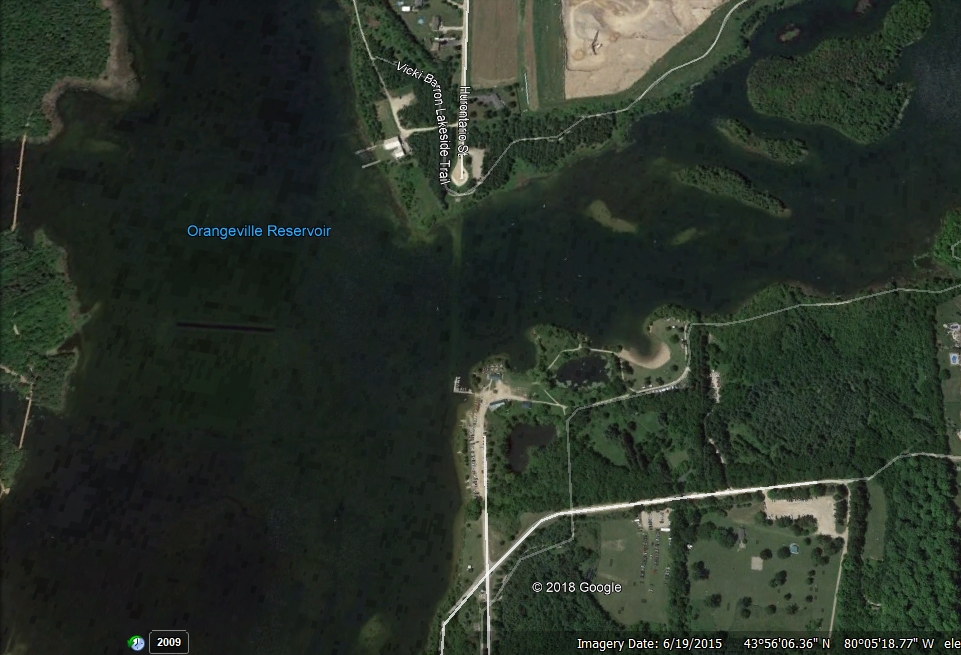 Beyond the reservoir in the Town of Mono, Hurontario is broken yet again between 5th Sideroad and Hockley Road: 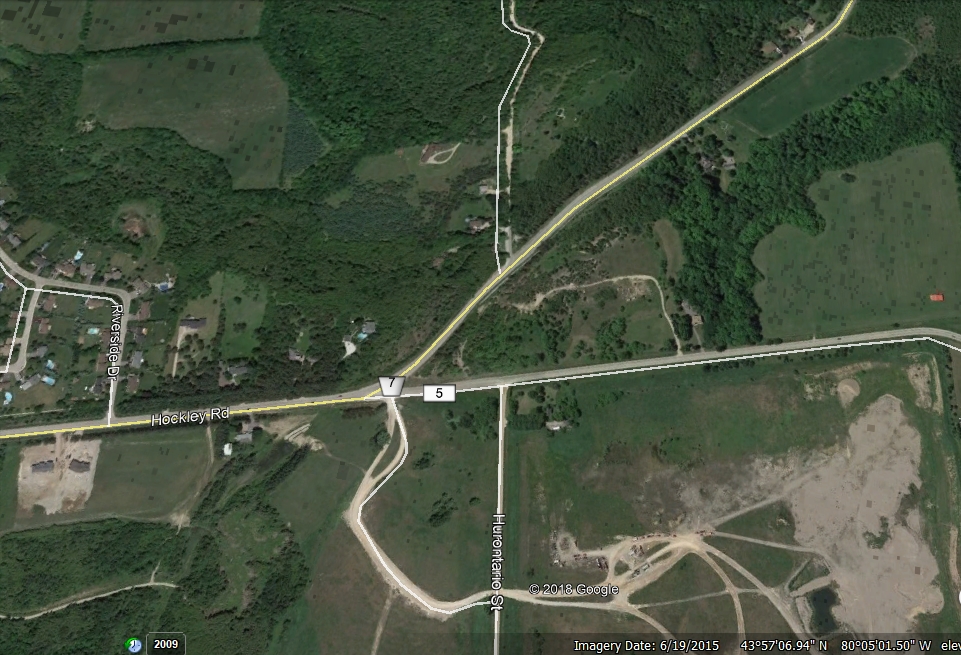 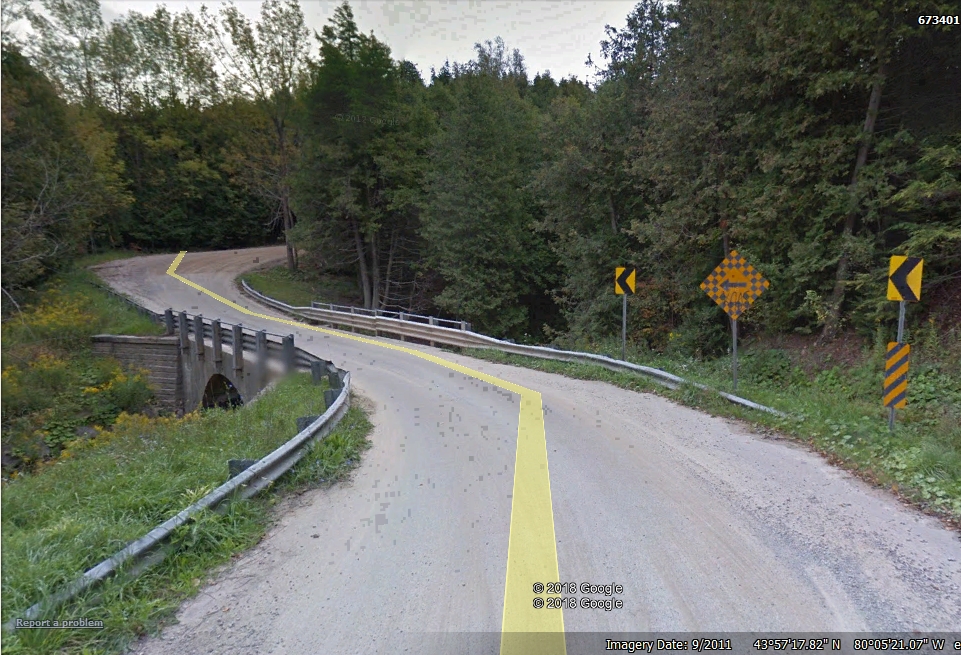 Still in Mono, the now clearly-distinct parallel roadways of Hurontario St. and Hwy. 10: 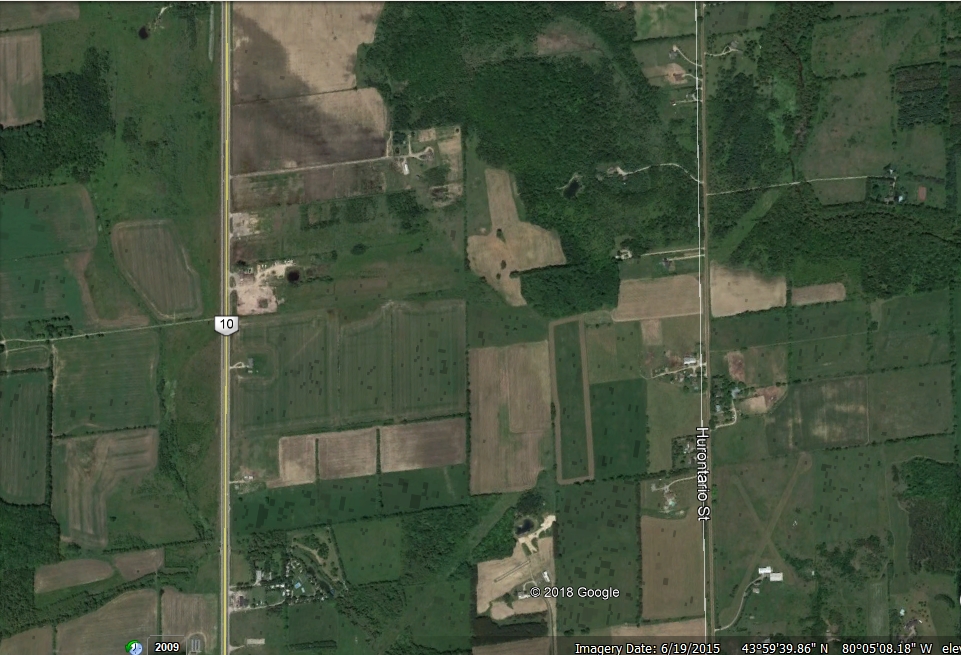 At Highway 89, Hurontario Street breaks at the Boyne Valley Provincial Park, though it originally ran through before the park was created. At left, Highway 10 turns west to follow 89 into Shelburne, separating from the vicinity of Hurontario St. for good. North of Hwy. 89, Hwy. 24 serves as the bypass and eventual route of Hurontario: 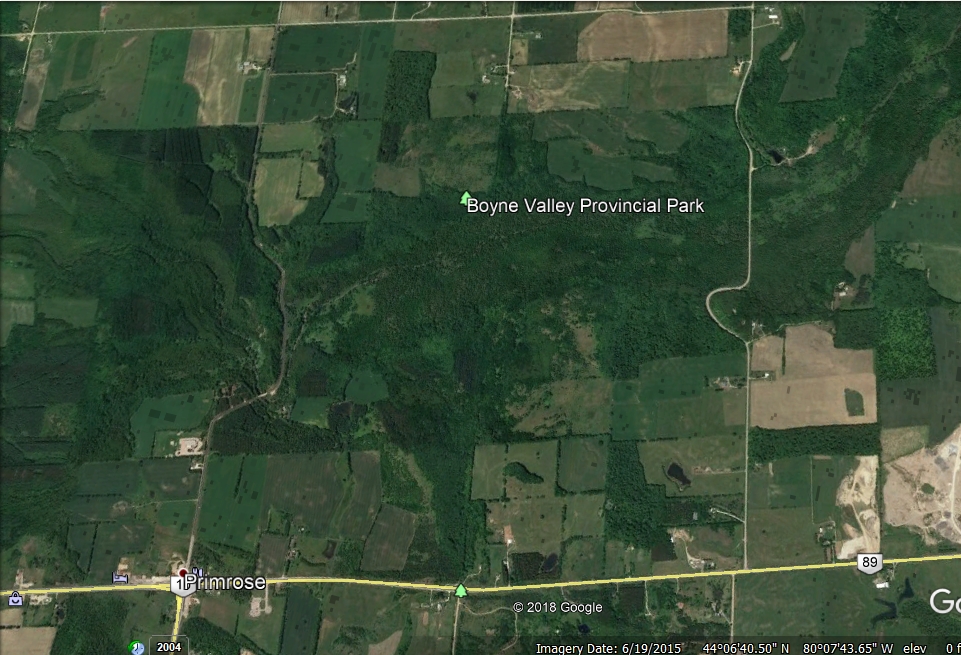 After the break, Hurontario St. reverts to its original name: Centre Road. Near the community of Kilgorie, it enters a northerly arm of the Niagara Escarpment and seriously gets broken up and reduced in status. Part of it is actually incorporated into another road, River Road, north of the hamlet: 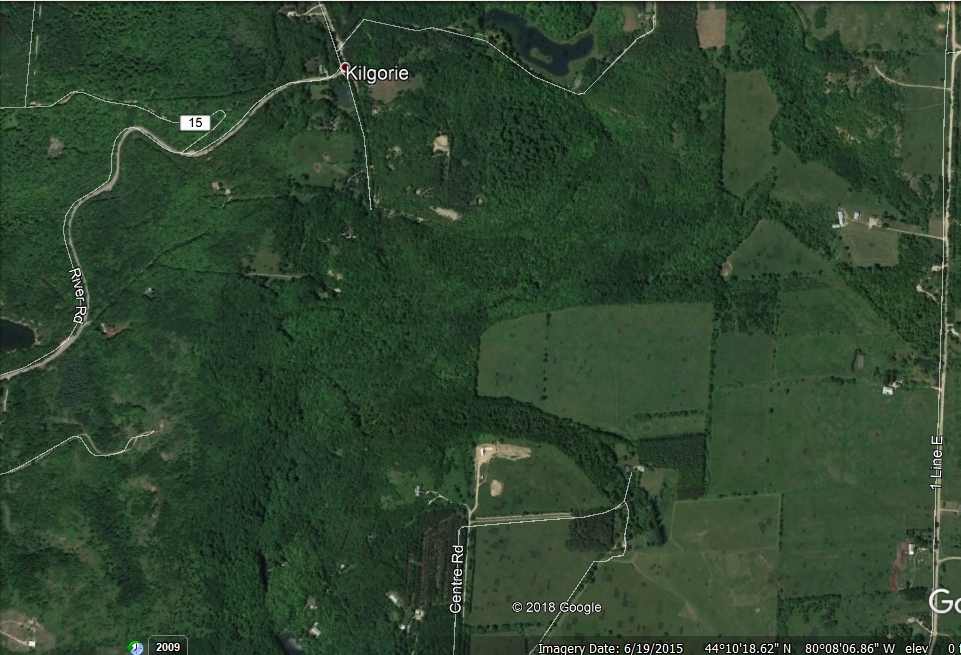 More of a path than a road now, it's hard to believe this a part of Hurontario: 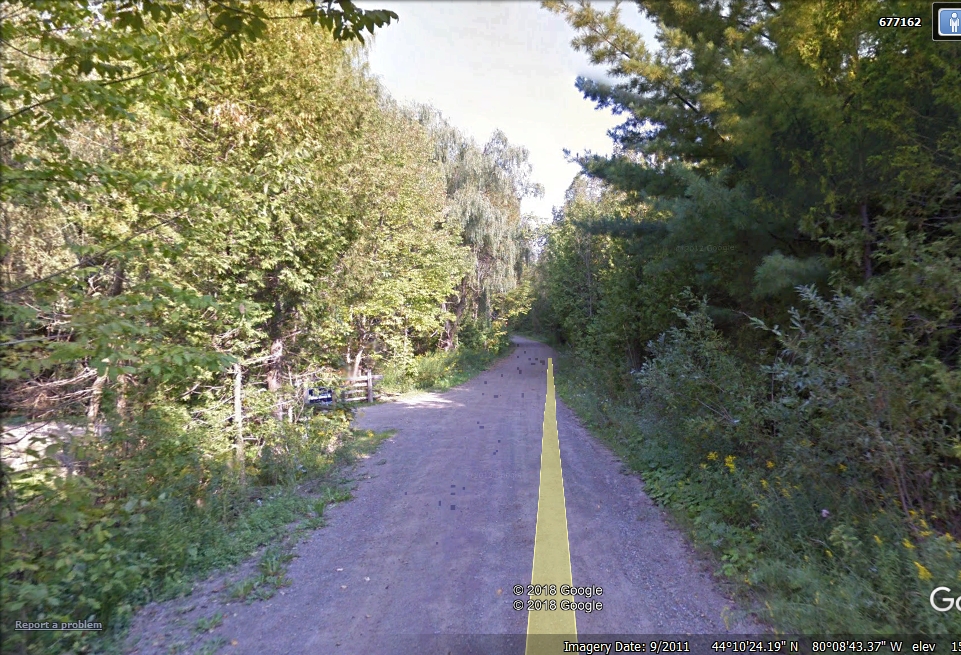 Interestingly, the Centre Road name continued to be used interchangeably with "Hurontario" in the sections where the latter name was later applied, even in Toronto Township (now Mississauga) until at least the 1950s, as this clip from a bus schedule from this pre-Miway private bus operator shows: 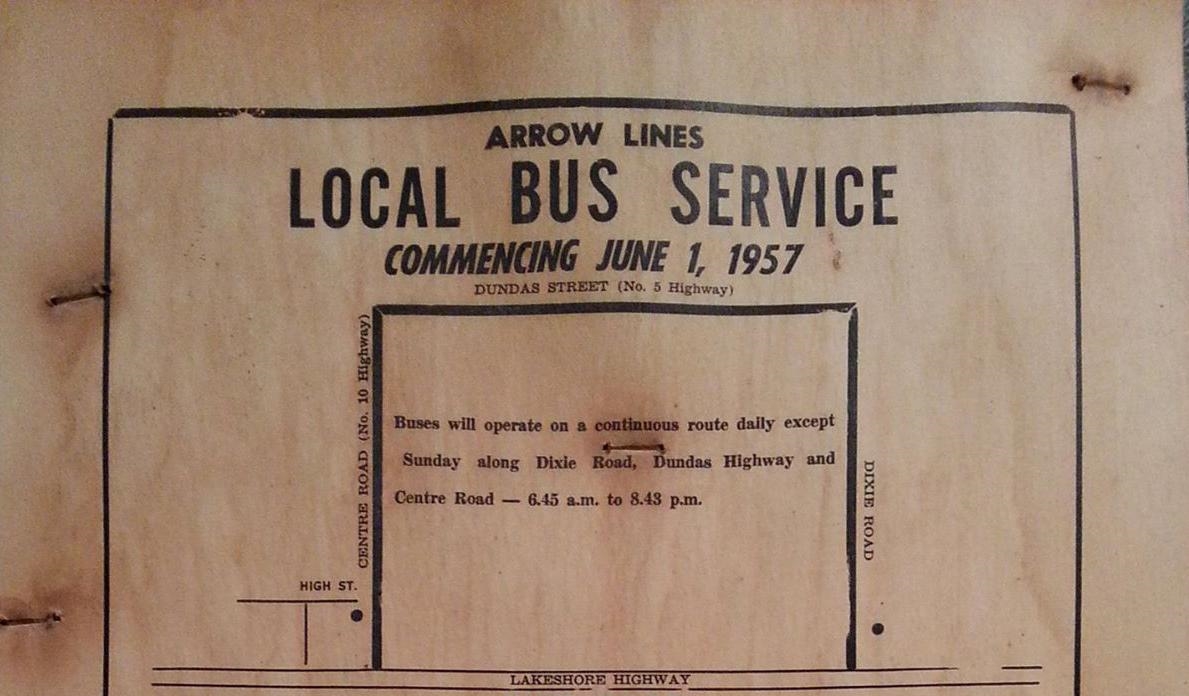 Just a short distance north, Centre Road turns off River Road, which carries the default road course both southwestwards and eastwards. Oddly, the section of Centre Rd. running off due south isn't actually the original Centre Rd. at all, as the second pic down, taken from an historical atlas, shows. River Road didn't even exist in 1880 (other than the part that now incorporates Centre Rd), when the atlas was published: 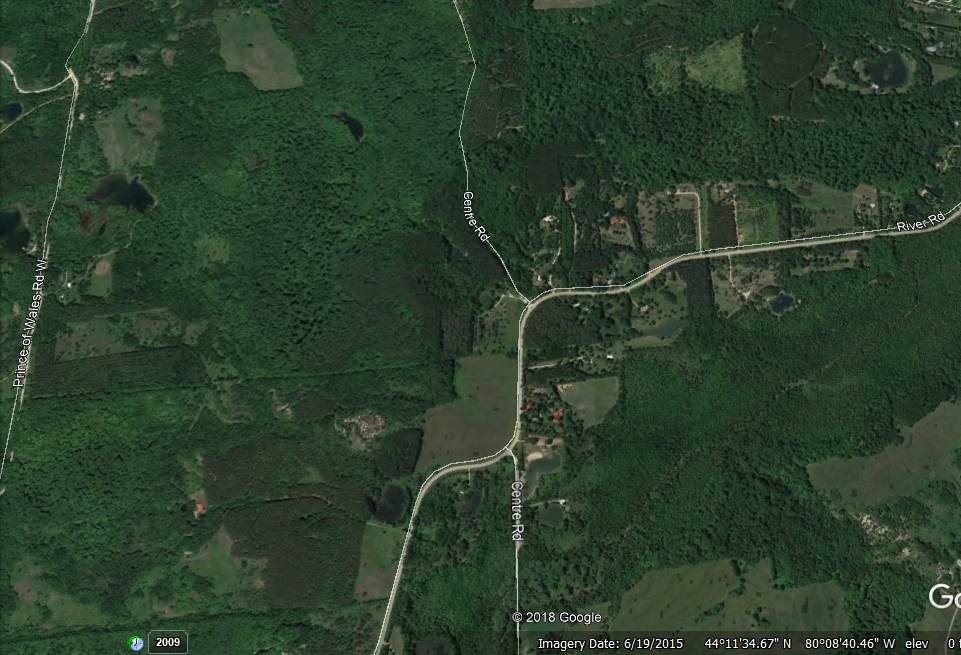 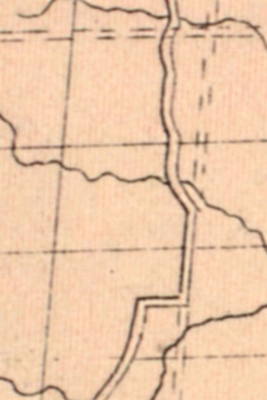 Continuing north, in the community of Dunedin, even Centre Road loses its name, and is named Lavender Hill Road and Concession 8 Nottawasaga north and south of a section that now incorporates County Road 9: 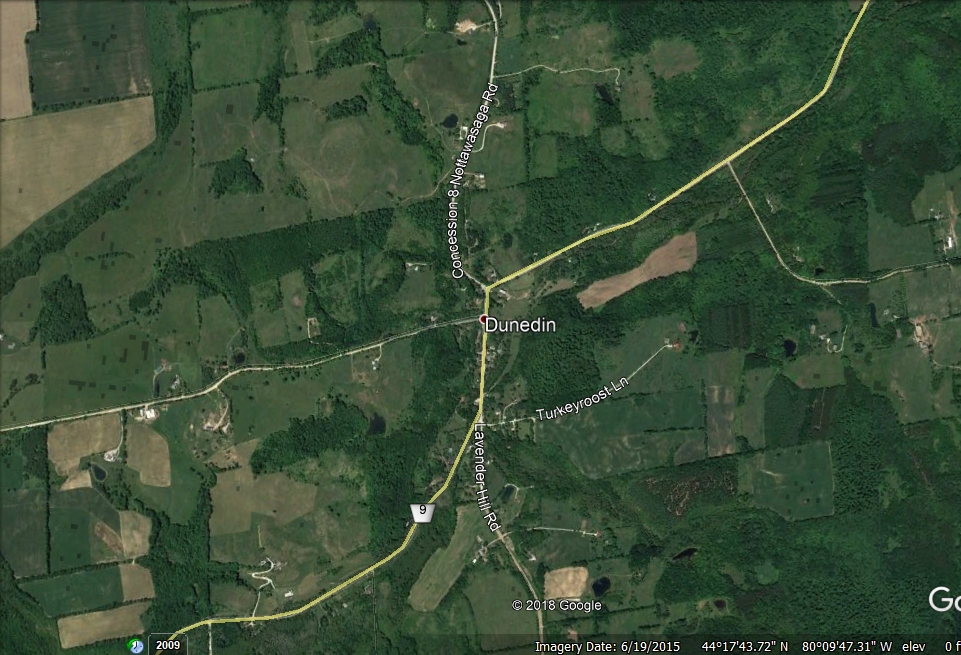 Finally, a short distance north of Glen Huron, Hurontario becomes a major road again as it joins County Road 24 (formerly Highway 24) at a 90-degree bend, regaining its name, and continuing to its northern terminus in Collingwood: 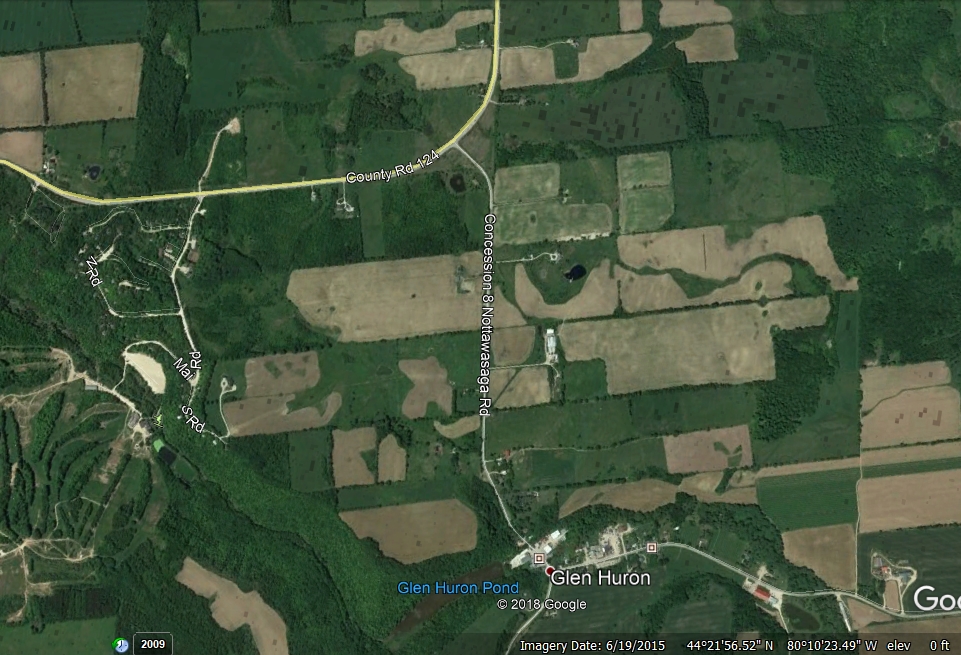 Here's a stitching of the historical map, showing the whole section between present-day Highways 89 and 24, running unbroken and without turnoffs:

Saw the post. Thought it was interesting; it tied together some roads that I am familiar with. Couldn't think of of anything to comment on. You got 180 views. Well done.
T

Yeah, I was wondering why I got so many views but no comments, considering similar "lost road" threads started by Lone Primate went on for multiple pages. Maybe it was because I broke up the essay into three parts.
T

Anyways, here's one more map stitch showing the originally continuous Hurontario St. near Orangeville. No namesake reservoir yet, but there is a large pond that likely gave rise to it on the right: 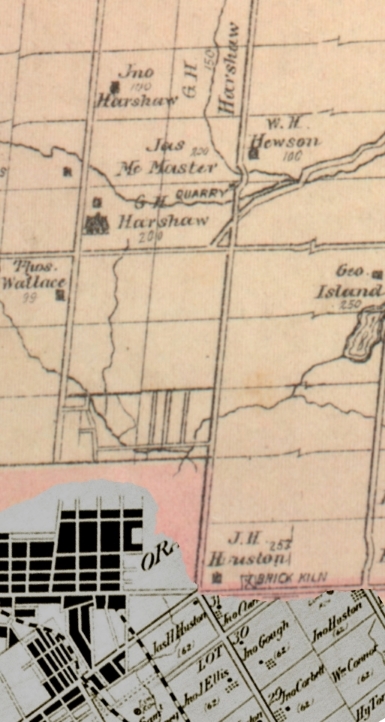 There are Internet articles and probably persons interested in Ontario's colonization roads: Opeongo Line, Monck Rd., Nipissing Rd., etc. Interestingly, Hurontario St. is not included - perhaps because it came much later.
Perhaps a little too 'in the bush' for frequenters of this site. Dunno.

There are a lot of early colonization roads that got incorporated into the grid - probably because they were in far better farmland than Opeongo Line, Monck Rd. or Nipissing Rd. Yonge Street, Hurontario Street, Garafraxa Road Elora Road, Huron Road, Sydenham Road (now Highway 10 from Shelburne to Owen Sound), Durham Road, Talbot Road, etc. These were the baselines of many township grids. So 5th Line West (now Heritage Road in Brampton) means the fifth line west of Hurontario Street.

Hurontario Street was the original name, but was interchangeable with Centre Road because it was the central north-south road in many townships, including Toronto Township, which used Centre Road (now Mississauga), Chinguacousy Township (now Brampton and south Caledon), and Caledon Township. It ran close to the centre of Nottawasaga Township (now part of Clearview Township).

Many of these road later became provincial highways - Huron Road, for example, became part of Highway 8 to Goderich. Talbot Road became Highway 3. The old roads were often bypassed by better alignments though.

Highway 10 deviates from Hurontario Road partly because it has a lot smoother terrain through the Dufferin highlands, and it was designed to incorporate both Hurontario Street and the Sydenham Road, especially north of Orangeville.
Last edited: Oct 1, 2018
T

It would have been cool if Hwys. 10 and 24 followed Hurontario/Centre right through the bypassed section (thus resembling Airport Road) and was a continuous street between Mississauga and Collingwood. As it is, it's hard to believe it originally was.

I failed to mention that Highway 10 north of Orangeville followed Prince of Wales Road, which is still called that north of Highway 89 after 10 turns west towards Shelburne as can be seen in the first pic on my third post. The name was removed along the part that became the highway.
N

Really enjoyed this, reminds me of Creditview Rd.
T

Funny you mentioned that; I was thinking of making a "Lost Road" for Creditview Rd. too.
D

You did a great job of researching it.
S