nfitz said:
You see a lot of people boarding the 506 from the Main subway, that travel to Upper Gerrard and the eastern parts of Lower Gerrard.

Why wouldn't you see similar from the Bloor line.
Click to expand...

Agreed. And all one has to do is live proximous to Roncesvalles to see the huge crush that travels up and down to/from Dundas West in peak to see the line of travel.

I keep flashing onto using the Queensway run for King cars when it re-opens, but you still have to get the crush up and down to/from Line 2. As it stands, the King Kore Klearway is an orphan. And no articulated vision from the City to make it otherwise.

In all fairness, that would take 'vision'...which is expecting far too much from Council and the idiots who elect their own kind.

@BenSpurr 6m6 minutes ago
Ahead of the release later today of latest batch of data on King St., Mayor Tory, who has been briefed on the numbers, told media "the data is generally positive on all fronts."
Click to expand...

@BenSpurr 5m5 minutes ago
For the first time since the pilot began, the city is expected to release economic data about the effect on local business. Tory said the stats will show "there are some pockets of concern that we have to address, but that by and large, people are going to get through this."
Click to expand... 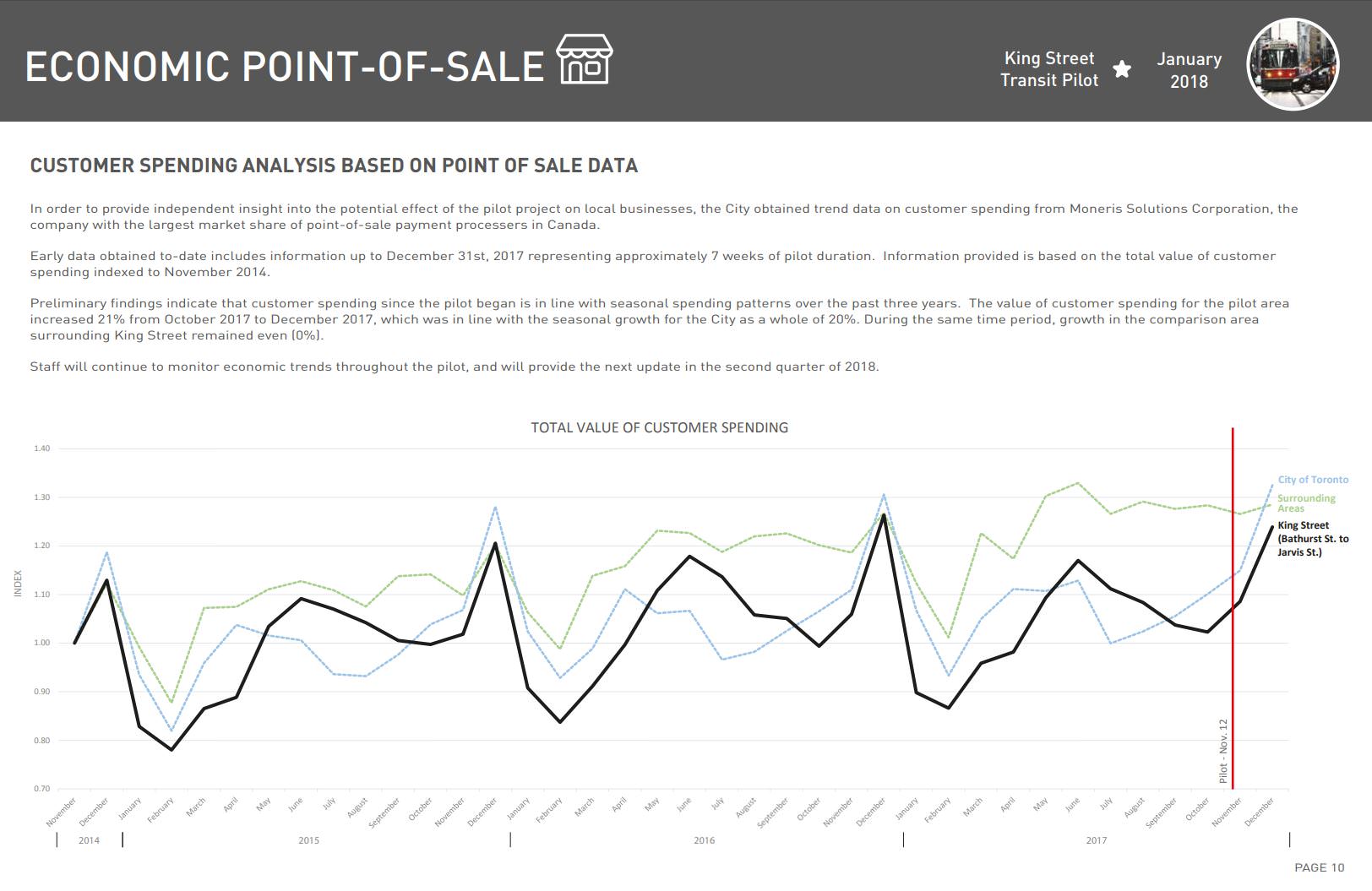 So because of the time the pilot was implemented, no significant changes for the norm could be seen. Once again, should have been implemented in the Spring.

Leo_Chan said:
So because of the time the pilot was implemented, no significant changes for the norm could be seen. Once again, should have been implemented in the Spring.
Click to expand...

Why? The Pilot is not trying to increase retail activity and the figures seem to show it had no significant effect. Retail sales were down on ALL streets studied - it was far colder than usual!
Last edited: Feb 16, 2018

The City of Toronto today released the next set of data on the King Street Transit Pilot, a transit-priority pilot project on King Street from Bathurst Street to Jarvis Street.

The January data dashboard is available at http://bit.ly/2BwOW86.

The year-long pilot project is being monitored for impact on transit service, traffic flow on parallel streets and effects on pedestrians, cyclists and local businesses.

Data from the King Street Transit Pilot is being released on a monthly basis on about the 12th of each month.

This news release is also available on the City's website: http://bit.ly/2EOf1la

Toronto is Canada's largest city, the fourth largest in North America, and home to a diverse population of about 2.8 million people. It is a global centre for business, finance, arts and culture and is consistently ranked one of the world's most livable cities. For information on non-emergency City services and programs, Toronto residents, businesses and visitors can visit http://www.toronto.ca, call 311, 24 hours a day, 7 days a week, or follow us on Twitter at http://www.twitter.com/TorontoComms, on Instagram at http://www.instagram.com/cityofto or on Facebook at http://www.facebook.com/cityofto.

And all that in an unusually cold and wet winter with no good shows on in the area.

Those against the King Street Transit Priority must hate the pedestrianization of Times Square in New York City.

Why does this thread even exist? Everyone is just agreeing with one another that the pilot project is a good thing. There is no debate or anything.

It exists so that we may discuss it. While the pilot may be a good thing, some of the way it has been rolled out has not.

There has been plenty of discussion around the pilot. Not everyone agrees with everything about it. There has been lots of debate.
Last edited: Feb 17, 2018

Well .... first of all there HAS been lots of discussion - you may not have been paying attention. Most UTers are in favour of tye concept but certainly some of the details have mixed reviews.
Secondly, it's a 'pilot' that is being tweaked and this is not a bad place to throw out ideas of how it could be improved once (I hope) it is made permanent and even in the pilot phase.

It's got far more valuable debate and information than the TYSSE form's 10 pages on bathrooms...
S

Also, much of the Eastern edge of High Park along Parkside Drive between Howard Park Ave and Bloor is characterized by a rather steep ravine down to Spring Creek. I doubt that tunneling is possible there. I remember a few years ago the westernmost lane of Parkside Drive was closed because part of the road had collapsed into the ravine.
Click to expand...

steveintoronto said:
There's also a very powerful aquifier under the north-east corner. Tunneling there is out of the question, albeit the aquifier is a good 50 metres or more down. It has an incredible pressure, and flow. What would have to happen is that lower than grade shelf is built along the edge of Parkside. Removal of a fair number of trees would be necessary, and few people understand, for better or worse, how High Park has already been highly mutilated. In the big scheme of things, this would only be peripheral, but an affront none-the-less, but Roncy just hasn't the room or nature to move streetcars the way needed for King to work the way it should. Ditto Broadview. The ends are very severe limitations.
Click to expand...

[...]Their names are largely lost, although the creek that ran along Indian Valley Crescent & Indian Grove, was once referred to as the Indian Valley Creek by Professor of Geology; Elwood S Moore. This particular creek entered into High Park at the exact location along Parkside Drive, where sinkholes appeared in 2009. This stream is no longer shown outside the Park in maps.
Click to expand... 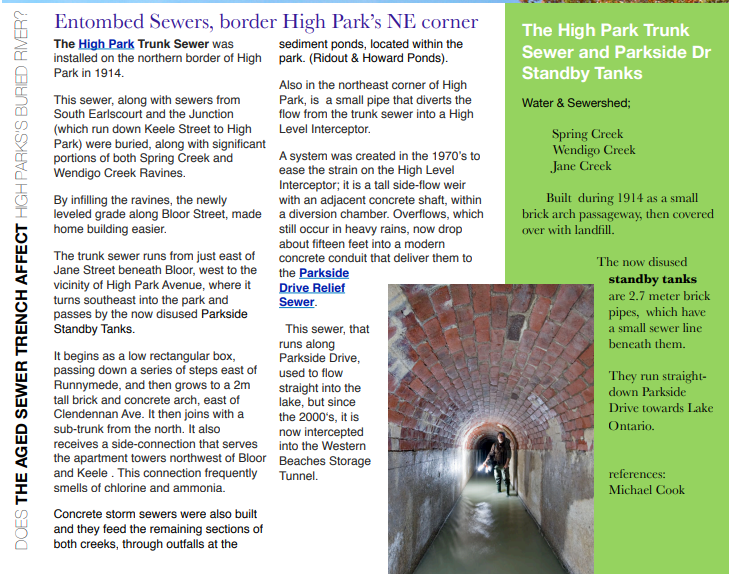 Tunnelling under Parkside Dr is a wet dream...doing a below prevailing grade ledge on the western edge is quite do-able, the loss of parkland besides, but considering what High Park has already endured, the eco gain for the loss more than justifies it.