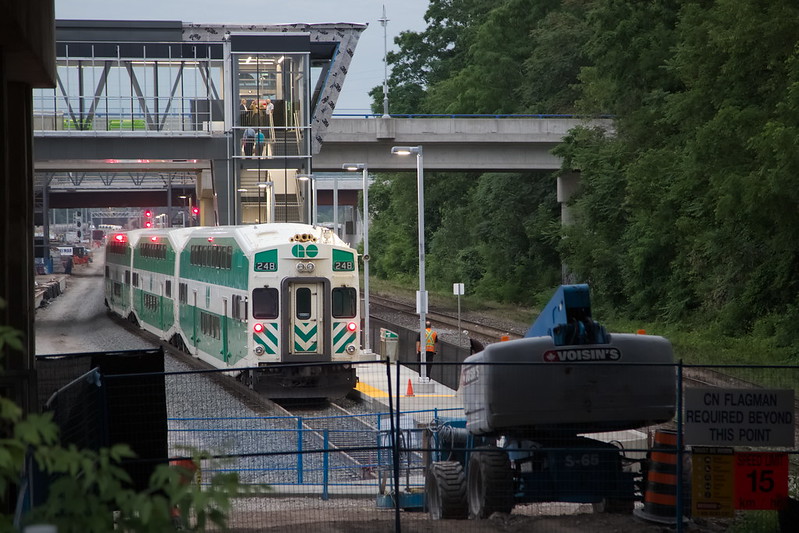 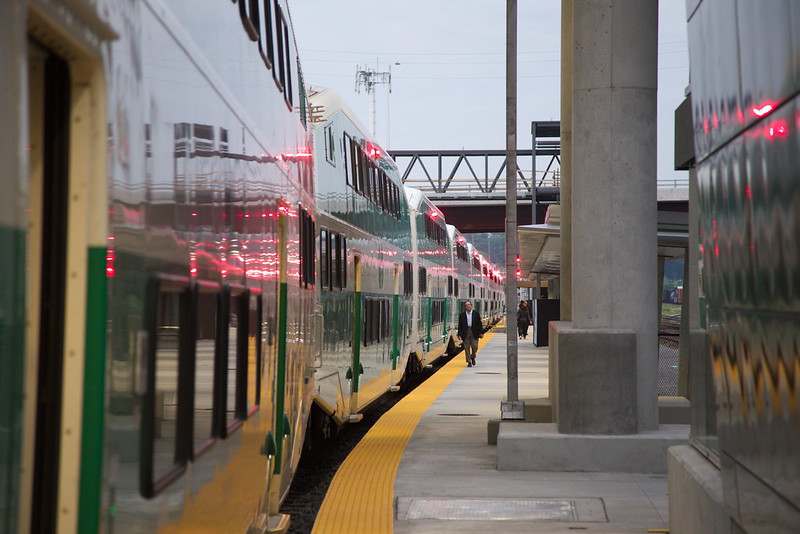 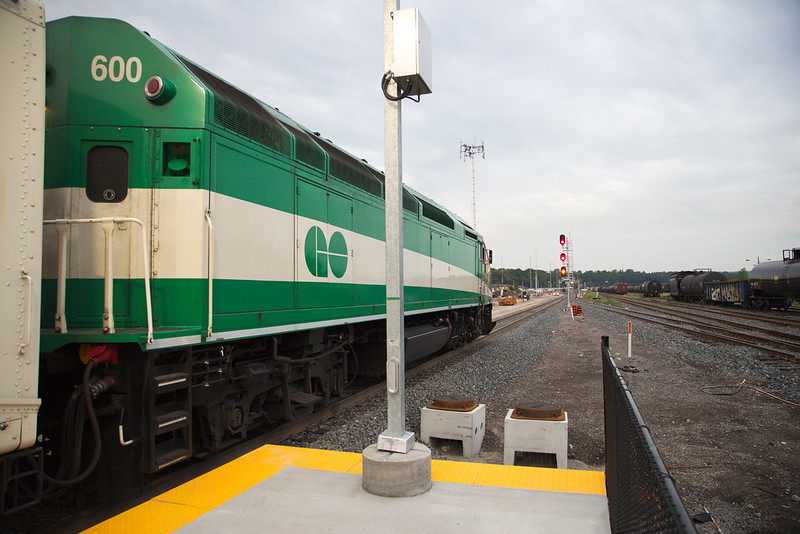 More on Flickr: https://www.flickr.com/photos/vgedris/sets/72157655848833891
I also took a whole bunch of photos around the station the night before, but haven't got around to sorting/posting yet.

I just rode home on Cannon (from James St N) at night.

For those who think Cannon bike lanes haven't attracted bicyclists in Hamilton...

Normally, Cannon Street bike lanes aren't this busy in a 30 second time period on a weekday night. But it was!

Normally, there is very few bikes or cars on Cannon at this hour.
Often 30 seconds pass by with 0 bikes. But not tonight -- seven bikes per 30 seconds
And it kept going for the whole length.

Tonight, I saw an amazing 5 SoBi bikeshare bikes in a three minute time period, while riding Cannon from James St N to Sherman Ave. They were in three different groups (one solo behind me, and two separate pairs going in other directions). SoBi seems to be getting more and more popular. Tonight they were far more often than I see people using BIXI in downtown Toronto. Also, tonight, I was riding my owned bike, so I wasn't riding a SoBi this time, so I wasn't even inflating the SoBi statistics. After I stopped the video, two more incoming SoBis passed me less than a minute afterwards.

For a change, there were as many (or more) bikes in the bike lanes, as cars on Cannon. It was a quiet moment for cars, while a relatively busy moment for Hamilton bikes for a late-night moment. Tonight, the otherwise too-quiet bike lanes earned their keep, and hopefully there are many more days like this to come.

Mayor Fred actually hailed SoBi's enormous success in Lower City on AM900 CHML radio today (July 16):
http://www.900chml.com/2015/07/16/mayor-fred-hails-bike-share/
Fred has publicly said that plans are in the works to expand the system up the Mountain.

Could the less successful Dundas be due to a lack of accompanying infrastructure?

vic said:
There's plenty of free bike parking at Hamilton GO too. In front of the station, and in the covered area by the bus platforms. The paid parking is just for the secure locker rooms (unfortunately, I can't seem to easily find out any info about those lockers on GO's website).
Click to expand...

You can find the info here: http://www.gotransit.com/public/en/travelling/leaveyourcar.aspx#cycling

(Admittedly, harder to find than expected.)

Speaking of West Harbour, I am trying to reach Metrolinx in many forms and manner to try to get the question answered: When is Niagara seasonal service going to include Hamilton as a stop?

Right now, it cannot be done in 2015 because West Harbour GO is a pocket track -- a spur that abruptly ends. But they will definitely extend the track onwards out of necessity for the Stoney Creek GO station, and of course, the Lewis layover train yard. For now, it is a deadend track at West Harbour GO -- it is a terminus for now -- but it's essentially guaranteed to become a 2-way station -- that is already funded.

So it is almost a certainty by 2019 (or whenever the Stoney Creek GO station is built). This is simply because of the sheer need to allow West Harbour GO station to become a bidirectional 2-way station (both platforms active & two tracks). It is so obvious that Hamilton can easily become a stop for Niagara Seasonal -- providing bona-fide bidirectional service for all Hamiltonians for weekend trips to Toronto or Niagara Falls -- and Hamilton becoming a destination for both (residents along the entire Golden Horseshoe). And GO have mentioned doing that eventually but can't this year due to infrastructure not existing yet (correct...) -- the question is simply when.

What I am currently trying to do is pull an answer from Metrolinx / GO Transit. I've gotten as far as successfully get GO Transit to call me back and say they're trying to find out this information for me.

But if this delays longer (they keep stalling), I'm almost tempted to do a FOIA request to Metrolinx sometime later this summer about what their current internal delibrations are regarding Hamilton inclusion on Niagara Seasonal service.

Before I do, any advice on pulling a specific timeline out of GO/Metrolinx?
Last edited: Jul 20, 2015
-- Follow @MDRejhon on twitter
N

For clarity you might ask them when in 2016 - you are more likely to get an answer to that, than asking service questions of infrastructure people.

Thanks -- yes, it is partially the tentative answer -- with a big caveat.

I have already thrown the 2016 date at them already and contacts seemed a bit cagey. Probably because they didn't know, but it could be because of showstoppers we're not knowing yet. I believe it is probably 2016 but they've thrown some potential barriers to the potential 2016 accomplishment.

-- The south track might be a spur too. It's happened before, that two tracks at a train station were spurs (e.g. for overnight layover.) GO has two spurs at Downtown GO for that purpose.
-- There's quite a bit of unfinished grading to the west, and no work has been started to prep the underpass.
-- The unexpected temporary accessible path they had to install (to solve the out-of-service elevator) that goes that goes around the spur, might be kept longer.

It is my understanding Lewis opens in 2016 too, so that's probably when they simply can fling the train onwards rather than time-consuming backing out of the spur (requiring driver to walk to other end of the train).

I'll certainly keep working the contact that's trying to find out the information. FOIA is a last resort, but I may be willing to pay the fee for an exclusive article I might write on this matter. It is a major Hamilton transit improvement (and for visiting Toronto friends of Hamiltonians; of we have several -- takes 2 to 2.5 hours just to reach us due to the time consuming Aldershot bus connection, then transfering to a more-infrequent-than-desired weekend HSR bus).
Last edited: Jul 20, 2015
-- Follow @MDRejhon on twitter
N

GO is always cagey. We still have little picture on what the 18 additional Kitchener-line trains each weekday will look like, even though rumours suggest that they could start as early as September, and are at worst a few months away.

It will be what it will be.

nfitz said:
It will be what it will be.
Click to expand...

In the most recent ten years, they tend to eventually do most things that are promised -- but late --- drag their feet at it -- like Lakeshore 30-min AD2W was reported to arrive as early as 2008 but didn't happen till 2013.

If I know GO, they might not do it till 2019. But with the fortunate momentum available (Stoney Creek GO and Lewis yard), it becomes a lot simpler. A decision to add a stop to an existing route. No brand new train runs are needed. No new staff time is needed. The 2 minute delay of adding a Hamilton stop, to a 2 hour route, is quite virtually zero overhead. Even stopping/reacceleration fuel would be insignificant, since the speed limit is low due to the yard and curve. It is a net farebox recovery increaser even with light boardings. The station would be a simple siding with simple logistics. It is wholly possible they are focussed on Stoney Creek and Lewis, without even thinking about Niagara. But at one point eventually, it becomes a simple matter since they will be de-facto doing the pre-requisites (out of sheer necessity).

There is a lot of room for GO to be less cagey for this. By being forced to quote a date to the public, they may end up becoming accountable to themselves. Making Niagara a very simple goal before Stoney Creek (without turning 2016 into 2019) as there's theoretically not much to do beyond pre-existing 2016 tasks.

Who knows, the sheer move of a simple FOIA may actually cause enough internal emails to occur, and cause somebody to make sure it happens by end of 2016 (since it requires no new government budget).
Last edited: Jul 20, 2015
-- Follow @MDRejhon on twitter
N

I can't imagine that once the platform is available on a through track, that the train will stop. That would be unique if it didn't. I'd hope the VIA/Amtrak train would stop too ... though that is certainly less clear, as it does not stop at most GO stops.

Fair disclosure -- I have a related article in the works for a site.

Am trying to get an official 'tentative' answer sooner than GO wants to give it...
-- Follow @MDRejhon on twitter
N

mdrejhon said:
Am trying to get an official 'tentative' answer sooner than GO wants to give it...
Click to expand...

Good luck with that. They won't give straight answers about operational changes, even after memos have gone out to engineers and other staff about the changes!
D

Speaking of SoBi, Hamilton's Bike Share, not sure if it was mentioned but they have now signed up over 5,000 Members (keep in mind only 3 /15 wards are in the service area).
120,000km+ traveled.

Check out this great stats breakdown on why SoBi Hamilton is already a huge success: