Farm Boy expansion in the GTA

Some parts of Farm Boy seem well-thought out. But it is not a complete shop. If you are visiting multiple stores anyway, why not go to a local butcher, bakery, etc. and not a corporate chain?
Member since February 10, 2002
N

afransen said:
Some parts of Farm Boy seem well-thought out. But it is not a complete shop. If you are visiting multiple stores anyway, why not go to a local butcher, bakery, etc. and not a corporate chain?
Click to expand...

In fairness, Farm Boy is a complete food offering.

What they lack is non-food items such as Paper Towel, TP, Dish Soap, etc.

Those items are largely non-perishable and could be picked up in quantities that last 2 months or more in a one-off trip to a different chain store.

Whereas no one (so far as I'm aware) is going to to do their food shopping every month or two. (maybe someone who is ok w/lots of frozen food?)

I think Farm Boy's offer is decent; though it could be better in spots for sure.

My complaints would be more centred around depth; product excellence; and bold flavour.

They do some of these well, in some segments, but not others.

In their pre-pandemic meals-to-go segment, I find them wildly inconsistent.

They've had a French inspired take on Beef Bourignon that was really quite good; and a General Tso's Pork Chop that might be fit for scoring on goal in a game of hockey, but not for eating.

In produce, they have more items available loose that some other stores (different kinds of beets; and rainbow carrots); as well as greater depth of fresh herbs; on the other hand they tend to have limited quantities of most exotics, and less selection on mushrooms than the typical Loblaws.

in summation it's a good store, with much to recommend it; but it's not for everyone and doesn't serve every niche.

Going to a Butcher might be my thing, but for most people you're complicating their food-buying regimen.

That's a butcher, a baker, a green grocer, a fish monger, plus a chain store for paper towels and soap.

I love to cook, so that's down my alley, sometimes.

But even I don't do that every week.

I wouldn't view FB as an alternative to independents; it's an alternative other chains, with more focus on food, on fresh and on a smaller footprint which makes it faster to get in/out.
An environmentally conscientious, libertarian inclined, fiscally conservative, socialist.
A

^If you still need to go to a full service chain to plug gaps in the depth/breadth of what FB carries, why not make your second stop that independent butcher, bakery instead of Farm Boy? FB seems like a half-measure. Maybe okay for fill-in shops mid week or convenience food trips.
Member since February 10, 2002 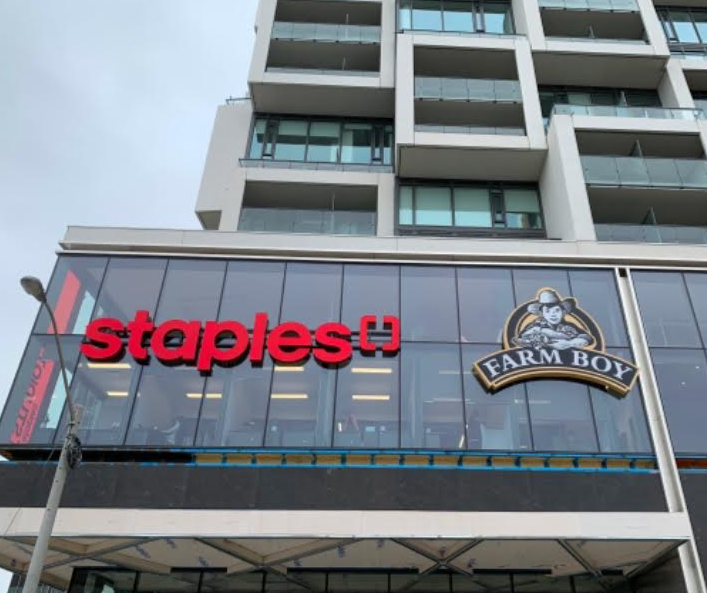 "Without Sicily, Italy leaves no image in the soul. Sicily is the key to everything." â€” Johann Wolfgang von Goethe.
N

Popped in to check out the new Farm Boy at Eglinton/Soudan today.

I don't know who they poached from, but they had considerable traffic; someone else's numbers are down for sure.

Second........visually their nicest store to date.

The ceiling has exposed mechanicals but is done in all black; while the experience at grade is full of wood, warm lighting and colours.

Meat section had the usual suspects (range of chicken, beef, pork) but fairly deep Ontario Lamb, along with organic meat, rabbit and duck.

A very comprehensive selection of Kozlik's mustard with 12 or more flavours; including Italian Mostarda, Orange & Ginger and Smokey.

But that lineup at the end was a doozy.
An environmentally conscientious, libertarian inclined, fiscally conservative, socialist.
N

The Farm Boy store at Bathurst and Front opens one week from today on January 28th, 2021.

I might go check it out on one of my walks, but I'm pretty unimpressed by them. It's nothing special, really.....or at least less than I thought it'd be.

I think my expectations were too high.
A true liberal. A working class man.
A

SunriseChampion said:
I might go check it out on one of my walks, but I'm pretty unimpressed by them. It's nothing special, really.....or at least less than I thought it'd be.

I think my expectations were too high.
Click to expand...

I kind of agree. Their hot meal area and bakery is nice, but the rest of the store isn't anything special.
Member since February 10, 2002

Farm Boy was better before Sobeys acquired them.
N

gabe said:
Farm Boy was better before Sobeys acquired them.
Click to expand...

Sobeys has mostly left them alone; really only helping them with real estate, so far as I understand.

Farm Boy does some things well; others need a bit of tweaking.

The expansion in the GTA has some short-term downsides; a large amount of their 'hot bar' food is done in the Commissary in Ottawa; and shipped to Toronto daily.

A GTA facility will be forthcoming and should result in improved freshness; I might also hope for more diverse culinary staff who can get some of the dishes to a higher standard of authenticity.

At 30,000ft2 they can do a fair bit with their stores; one issue in Toronto has been the tendency toward very small stores, which limits their selection.

Frankly, they need to refine the layout in some of their smaller stores to get a bit more product in; and there's indications that's coming.

I look forward to seeing what they've done w/Bathurst and Front.

I expect something similar to the Yonge/Sudan offer; but I'm hoping just a bit more interesting.

Of course, the current pandemic has also stifled their hot bar / cold bar offerings and diminishes the shopping experience (no samples)

With any luck, current restrictions will be gone by mid-summer or early fall and they'll be able to better showcase their product.

I consider their greatest weaknesses to be in Bakery, where I feel there are some issues around softness/freshness of certain breads.
An environmentally conscientious, libertarian inclined, fiscally conservative, socialist.

afransen said:
I kind of agree. Their hot meal area and bakery is nice, but the rest of the store isn't anything special.
Click to expand...

I don't remember the bakery much....perhaps I didn't go there at all in the few times I've been (which seems weird for me) or it wasn't memorable.

The ready meals were quite decent, at least as far as selection went anyway.....I'll give them that.

I'm going to give this new location a chance. Swing by and do some full shops in there. Can't say I've done that as of yet. Just minor quick trips.

Everyone gets a second chance, even retail establishments.
A true liberal. A working class man.
N

The Sobeys Urban Fresh on St. Clair, just east of Yonge will be shuttering shortly, and converting to a Farm Boy.

Your next downtown Farmboy can be found at 100 Queen's Quay East: 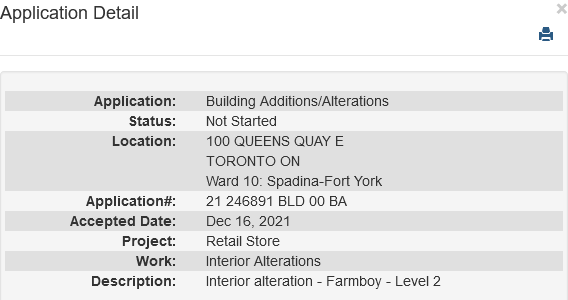 Northern Light said:
Your next downtown Farmboy can be found at 100 Queen's Quay East:

That’s extremely close to their Harbourfront Centre store at Queens Quay and York, but with all those condos popping up it makes sense.