Interesting note- Houston's lack of zoning controls ironically is what allowed it to densify. Is this what a post-Yellow Belt neighbourhood will look like? 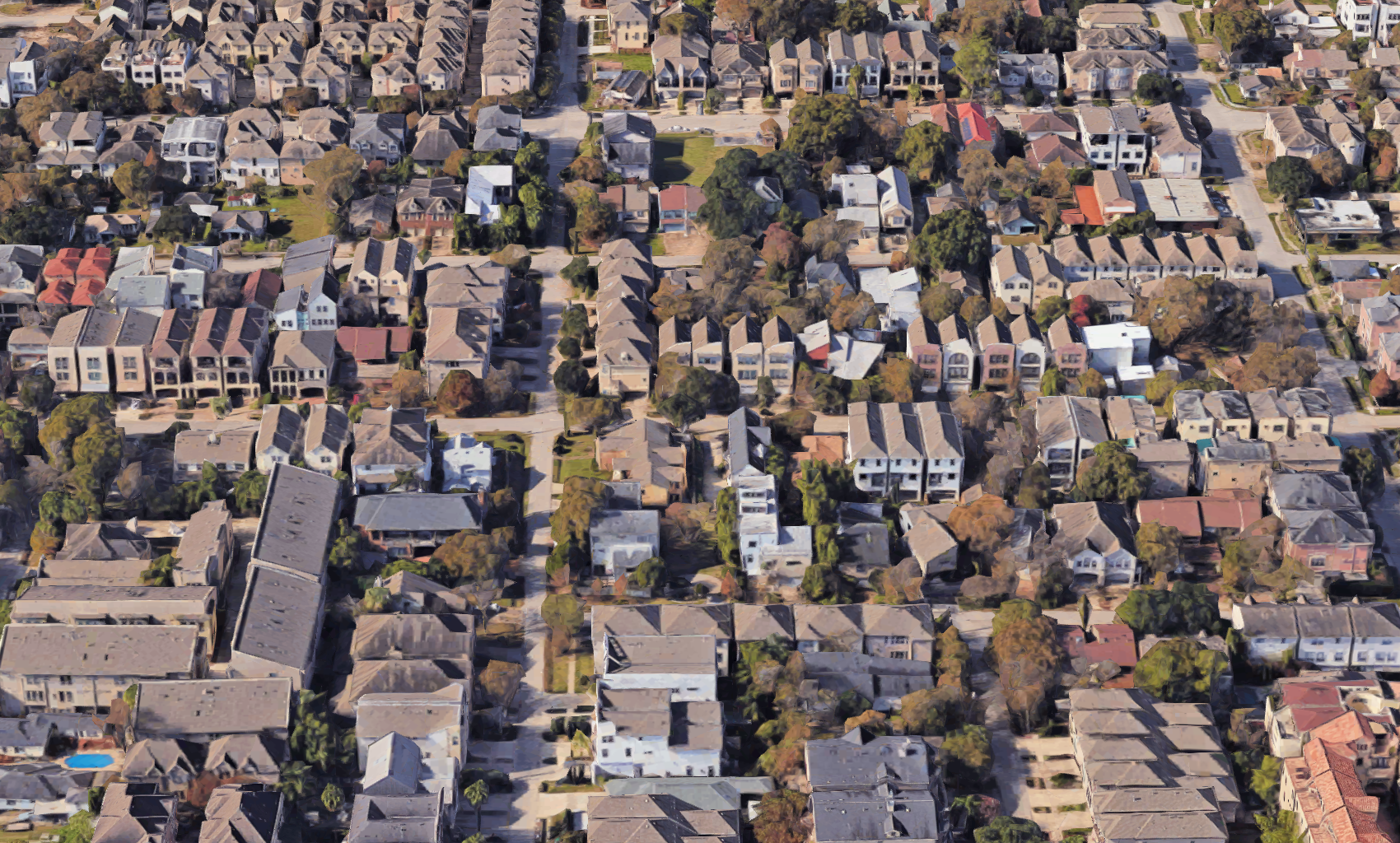 Houston is famous for its car-oriented sprawl. Though it lacks a zoning code, the city has historically mandated low-density development through non-zoning regulations, like minimum lot sizes and stringent parking requirements.

But in 1999, Houston enacted sweeping land-use reforms: it decreased the minimum residential lot size from 5,000 square feet to 1,400 in close-in neighborhoods. In effect, this reform legalized townhouses in areas with suburban-style houses on huge lots. Two or three houses could now take the spot of one.
Click to expand...

The political significance of these reforms cannot be overstated. Single family zoning is somewhat of a third rail in American local politics; it’s exceptionally rare for residents of suburban-style neighborhoods to allow denser development. Urbanist commentators have noted that “missing middle” housing — forms like duplexes and small multifamily apartments — has been regulated away in most American cities. Houston represents an important dissent from the notion that single family neighborhoods are to be preserved at all costs.

The results of these reforms have been remarkable. Areas that were once made up entirely of ranch-style houses, McMansions, and underused lots are now covered in townhouses.
Click to expand...

The infill process is typically incremental, with detached homes being replaced one at a time. This often leads to a diversity of housing styles on a single block:

One major benefit of these townhouses: they’re cheap! Development at this scale uses cheaper construction methods than those of large buildings, and Houston’s straightforward permitting process reduces regulatory uncertainty and thus financing costs. A cursory search on real estate websites reveals luxury townhouses a mile from downtown from the low $300s.

Now, Houston’s approach does have its flaws. Parking is still mandated, setback requirements and inward-facing homes make for a lousy pedestrian experience, and some new houses are, frankly, ugly. In some areas, unhappy homeowners have lobbied successfully for block-level regulations that re-outlaw townhouses.

But the key insight here is that piecemeal densification is possible, and it works. Houston has found a way to add significant amounts of housing without sprawling.
Click to expand...

Note on the polikatoikias found throughout Athens- an alternate post-war continuation of older owner-developer derived, traditional wall-to-wall urbanization as compared to the suburbanization/deurbanization embraced throughout many other parts of the West. Remember that this owner-developer model was a process that was happening in Toronto until the emergence of post-war zoning and the master plan.

IMO, we have never lost the ability to create vibrant neighbourhoods, but the fact that many new developments don't produce them is the result of overzoning and overregulation that favours rigid, single-owner corporate-led development, and centralized top-down planning models/institutions resistant to change (we are still prioritizing vehicular traffic models in new neighbourhoods and developments). Simultaneously, the fear of change (in part caused by disastrous urban renewal) has resulted in underdeveloped neighbourhoods (i.e. the Danforth) being frozen out of fear that their 'character' could be lost, denying them their ability to evolve, while 'incompatible' uses (i.e. the Matador) that give neighbourhoods their vibrance are stymied by NIMBYism.

When the polikatoikias (the term simply means condominium) were spreading across Athens in the 1950s, they did so in a city with urgent housing needs and little money to spend. At the time, people were flooding to Athens from the provinces — a trans-European phenomenon made more intense in Greece by the civil war that finally ended in 1949, which provoked many to flee a partly devastated countryside. New Athenians needed homes fast, but the state lacked the funds and will to construct public housing, and banks were offering few loans.
Click to expand...

To solve this conundrum, Greeks created their own funding system called antiparochi, in which developers saved themselves the cost of buying land by giving landowners a share of the constructed units when they were completed. “The best translation of the term is probably ‘flats for land,’ or as some people say, ‘quid pro quo,’” says Panos Dragonas, an architect and professor at Greece’s University of Patras. “The system saw landowners hand over their property, and in return get, say, two to five apartments back in the completed building to live in, or rent or sell. It was a bottom-up system of housing development not created by any law change by the government, though the state did offer motives for construction by granting tax breaks.”
Click to expand...

Despite the fast construction — usually to a civil engineer’s design rather than an architect’s — the generally family-sized apartments (i.e. 2-3 bedrooms) were often pleasant places to live. With deep, often wrap-around balconies that were frequently large enough to fit a full-sized dinner table and a wall of plants, the apartments had communal central heating (still a novelty across Europe in the 1950s), spacious common areas and surprisingly solid construction.

The state contributed little or no cash to these buildings, but it did place limits on some aspects of their design. It ensured, for example, that any polikatoikia rising above six floors was set back in tiers from that floor upwards. This created a characteristic Athenian roof-scape, in which little ziggurats of penthouse-style flats, with broad wrap-around terraces, could be found topping many buildings, even in less wealthy areas.
Click to expand...

The resulting variety of apartments within the same building ensured a good deal of social mixing. “There were wealthier people on the upper floors,” says Dragonas, “people who had just arrived from the countryside further down and poor students in the basement. That sort of vertical stratification inside a five-story building helped Athens to avoid horizontal stratification — there weren’t really neighborhoods that were only rich or only poor. And the polikatoikias in the richest and the poorest areas were more or less the same building.”
Click to expand...

Not that these buildings were exclusively residential. The municipality of Athens only practiced zoning for heavy industry, leaving people free to set up shop in a polikatoikia. Even today, these buildings are often hives of activity, mixing offices, medical practices and even the odd workshop among homes. According to Dragonas, this was “a cancellation of all the problems of modern urban planning, just by mistake. No one had thought about it, but the result was a fantastic mix of uses within a small-scale building. That’s why the streets of Athens have a wonderful level of life all day, all night and all week.”
Click to expand...

jje1000 said:
Problems for densification- but intensifying the suburbs should be an interesting challenge.

I like low rise residential flats, but my real estate contacts tell me that it is too expensive to develop low rise. For example, the Rexall site at Wincester and Parliament is zoned for five stories, but the owner says he needs at least ten to make any money. I suppose a lot of that is BS greed, but we shouldn't have fees and construction costs so high that only high rises are feasible.
https://twitter.com/AdmiralBeez
Trending #BlockedInToronto on Twitter.

^Thank our property bubble for that. I think the Houston type of low rise infill would be cheaper because there would be no need for building cores and underground parking. Perhaps we could also simplify our planning regime to reduce costs further. I'm sure there's a lot of mileage to be gotten in that particular category.

edit: I walked around Rice Military and Shady Acres in Streetview and it's pretty eye opening as to what could be possible in Toronto. There are so many shabby and ageing single family areas in the city where this kind of redevelopment would really refresh the neighborhood.

It looks like those Houston lots are larger than most post war lots in, say, Scarborough. So I doubt we would see 6 townhouses/3-4 semis infilling former single family lots. However, I could see "three pack" townhouses easily fitting on most suburban lots. All hail townhouses!

Also, no need for two car garages. Anything within a quick walk of the subway, GO, LRT and even frequent bus routes should have one parking spot maximum.
Last edited: Jul 19, 2020
W

Admiral Beez said:
I like low rise residential flats, but my real estate contacts tell me that it is too expensive to develop low rise. For example, the Rexall site at Wincester and Parliament is zoned for five stories, but the owner says he needs at least ten to make any money. I suppose a lot of that is BS greed, but we shouldn't have fees and construction costs so high that only high rises are feasible.
Click to expand...

It's not complete BS. Construction costs (material and labour) have skyrockted higher than even housing prices.

It's why developers aren't biting on midrises along the Avenues either to City Planning's dismay. All the costs of a high-rise, but less units to sell.

WislaHD said:
It's not complete BS. Construction costs (material and labour) have skyrockted higher than even housing prices.

It's why developers aren't biting on midrises along the Avenues either to City Planning's dismay. All the costs of a high-rise, but less units to sell.
Click to expand...

Significant stretches of Sheppard and Kingston are going mid-rise.
W

And here is the City Staff Report: https://www.toronto.ca/legdocs/mmis/2020/ph/bgrd/backgroundfile-148582.pdf

I scroll down to see what things might be implementable from the report and see this. 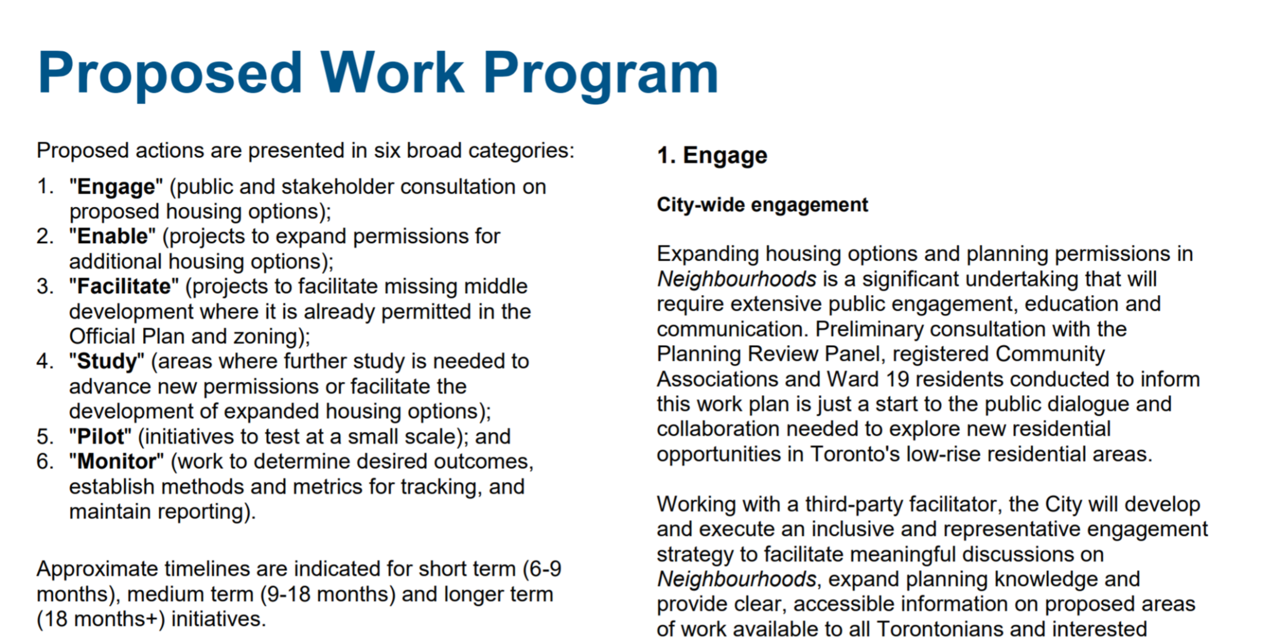 So much hoopla on a bunch of nothing, yet again. A failure from the City on actually trying to accomplish anything meaningful on the issue.

If step number 1 is "Engage" and "public and stakeholder consultation" then that is where this work program likely ends in an onslaught of NIMBYism and protesting city councilors.

They even admit to their pessimism in the text at the bottom with their given approximate timelines for each step. If you average it out to a year's length (in reality it will be longer due to public backlash, political meddling, and staff time constraints), then that is 6 years to accomplish the 6 steps. Counting from today, that encompasses two election cycles. All that in order to only accomplish some sort of "pilot".
J

Cambridge Massachusetts.
it's from Alexis.

Is a COA hearing on this really necessary? It seems like a waste of time and money for the owners and the City. I should add I have no interest in this application. It reminds me of how I had to go to Committee to extend a one-car garage at the back of a 167 foot lot by two feet.