Today, the Canadian Premier League's first team was officially unveiled, the York 9 FC ("9" stands for the nine municipalities in York Region). For the first few years they will play at York U, then move to a 15,000 seat stadium in York Region (location TBD).

Founding Partner Preben Ganzhorn’s Danish upbringing has helped inspire the club’s stadium initiative, which will provide maximum amenities and comfort for supporters, but minimum imprint on the environment.

Italian Stadium designers Rubner Holzbau along with Bear Stadiums are developing modular expandable soccer venues built with glulam materials from Tyrollean wood. The result is a natural looking but durable stadium that can grow with the club.

The wood is derived from sustainably managed forests, and the production and installation of these structures require low energy consumption, lessening its carbon footprint. The company’s stadium products also incorporate other sustainability details, including low flow faucets and toilets.

A location for the 15,000 seat stadium is currently being sought after with the optimal location being one that would be easily accessible for York’s nine municipalities.
Click to expand...

VMC could be an interesting spot - it could use some more truly "event" spaces.

Bear Stadiums, advisor in sport facilities and architectural design, and Rubner Holzbau, European leader in Glulam technology, are proud to present their "modular wood systems", thanks to which you can choose the stadium tailored to meet your needs. The innovative modular system allows us to produce and transport the modules of your stadium in 40 feet containers to any destination in the world and to assemble the stands in record time, guaranteeing fixed and limited costs.
More....http://www.bearstadiums.com/en

An here is more info on the team

Soccer’s fledgling Canadian Premier League unveils its first team, the York 9 Football Club
York 9 and York University struck a partnership that will see the team play home games and practice at the university for the next couple of years. But the club is also looking to build a stadium devoted to soccer of between 12,000 and 15,000 seats in the region. The aim is to create an atmosphere akin to what a fan would experience in Europe, said president, Preben Ganzhorn.

“We’ve already had a bunch of meetings with different parties in the region. We’ve looked at some fantastic places where we can build stadiums, but it’s a work in progress right now to figure out where we want to build, what the infrastructure is like in the area,” he said.

It’s not clear who will pay for the facility. The financing model is still to be determined, Ganzhorn said.

“There’s a lot of different options, and, really, it’s not hard for us to get the financing for the stadium,” he said. ‘We’ve been touring, really, with our vision and so many people buy into it and want to help. It really is about finding the ideal location at this time.”
Clanachan said the stadium could be built within two years of the team’s first kick next spring.

“I’ve seen the designs,” he said. “Very impressed. I like what I’ve seen ... what I’ve seen. The people of York will be extremely impressed. It just takes time to put it together.”
more...https://www.thestar.com/sports/socc...-its-first-team-the-york-9-football-club.html
Last edited: May 11, 2018

From the Bear Stadium website, here is what their 15,000 seat wooden modular stadium design looks like. Could give us an indication of what the York 9 FC stadium will resemble. Pretty cool stuff. 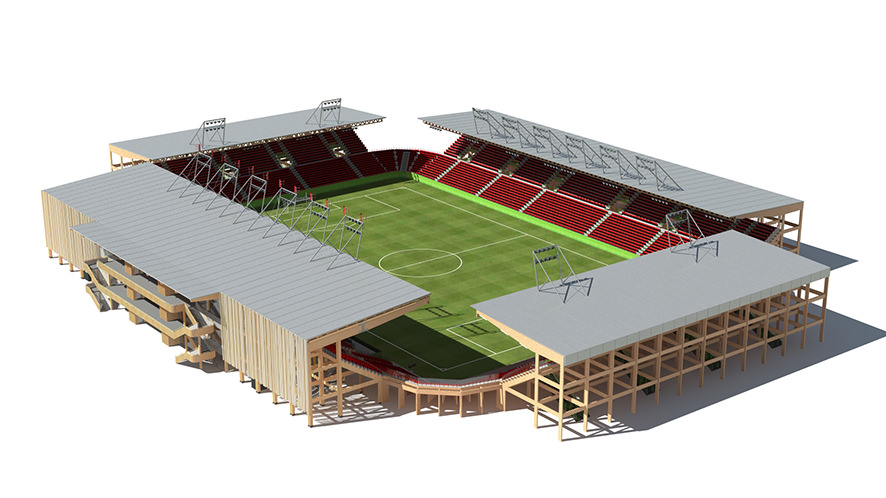 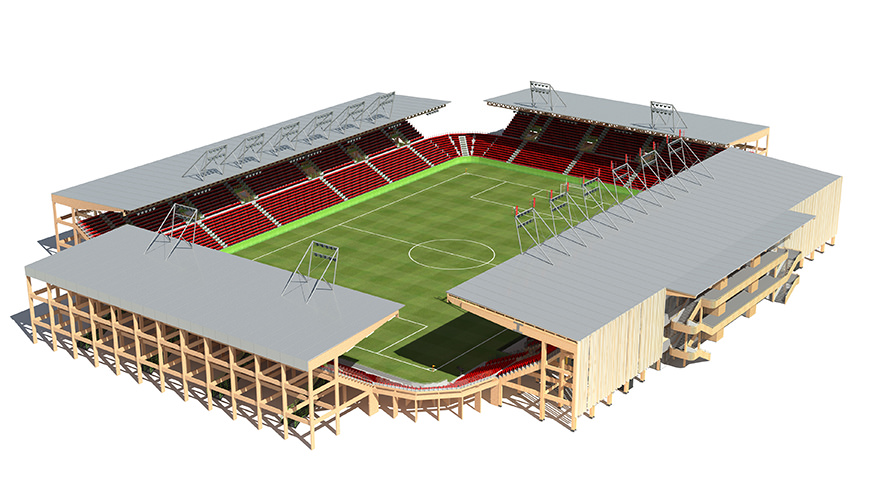 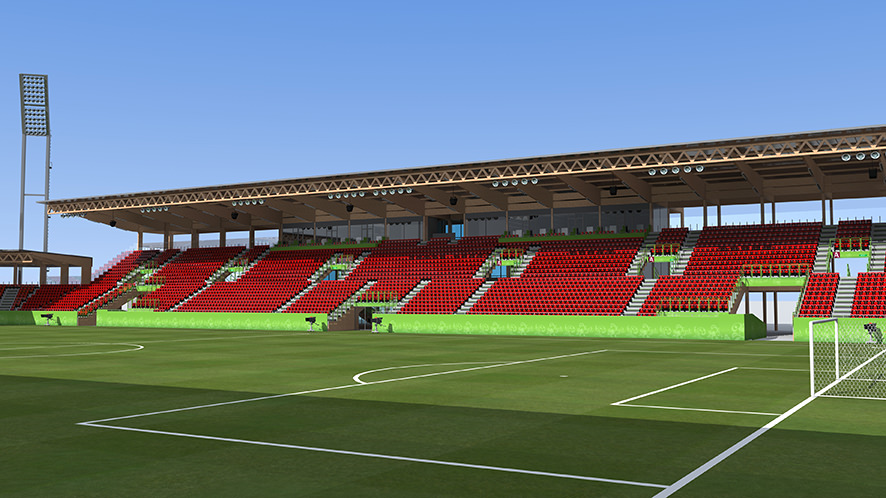 Update on the York 9 FC stadium plan. It will feature a "3-year venues plan" (not much detail on this). They will begin the 2019 season at YorkU's Alumni Field, and then by mid-summer move to the York Lion's Stadium once upgrades are complete. Longer term, the vision is still to have their own stadium in York Region, some rumours have said it will be close to the future Kirby GO (not mentioned in article). Article below:

York 9 FC unveils stadiums plans for 2019 and beyond 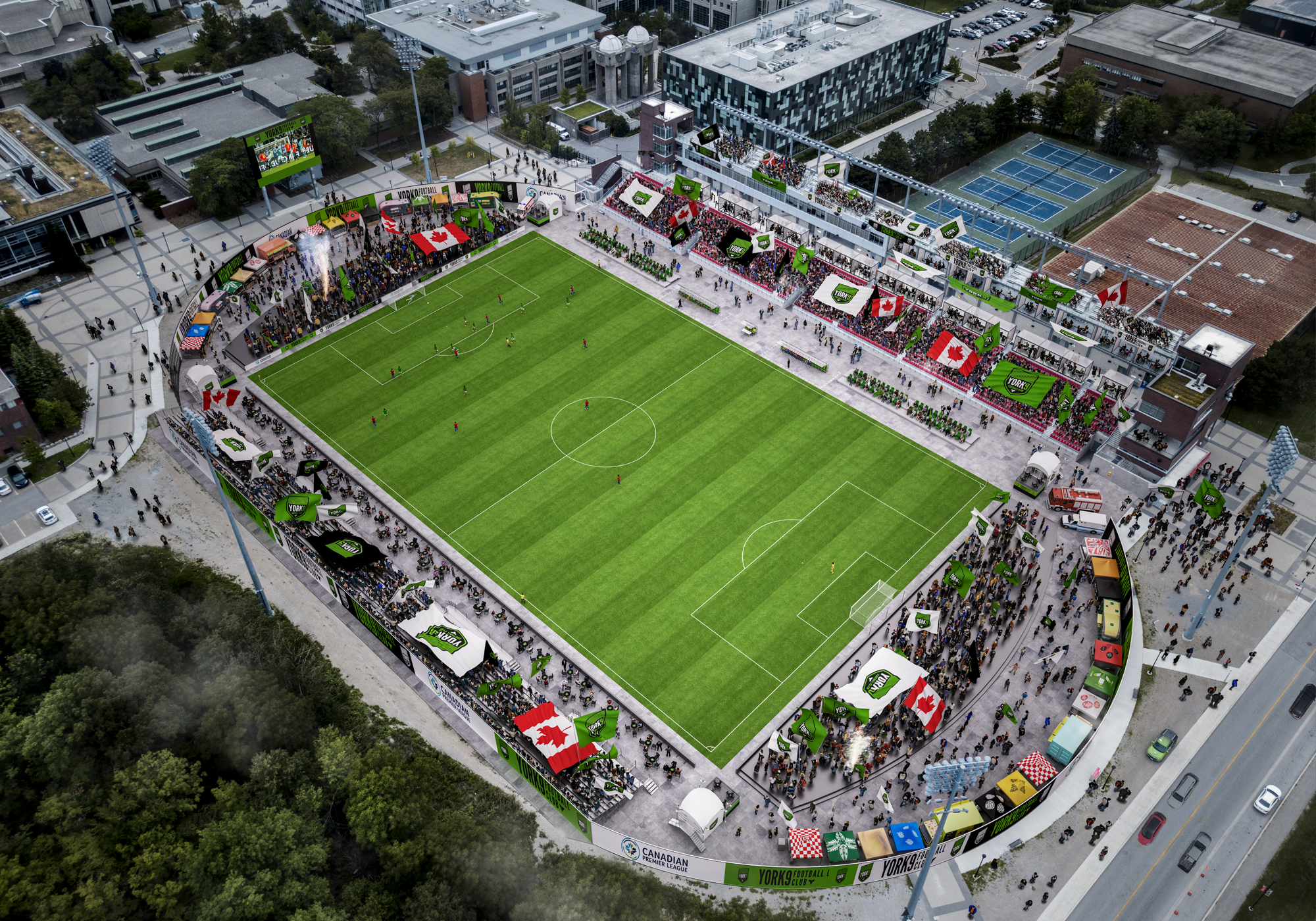 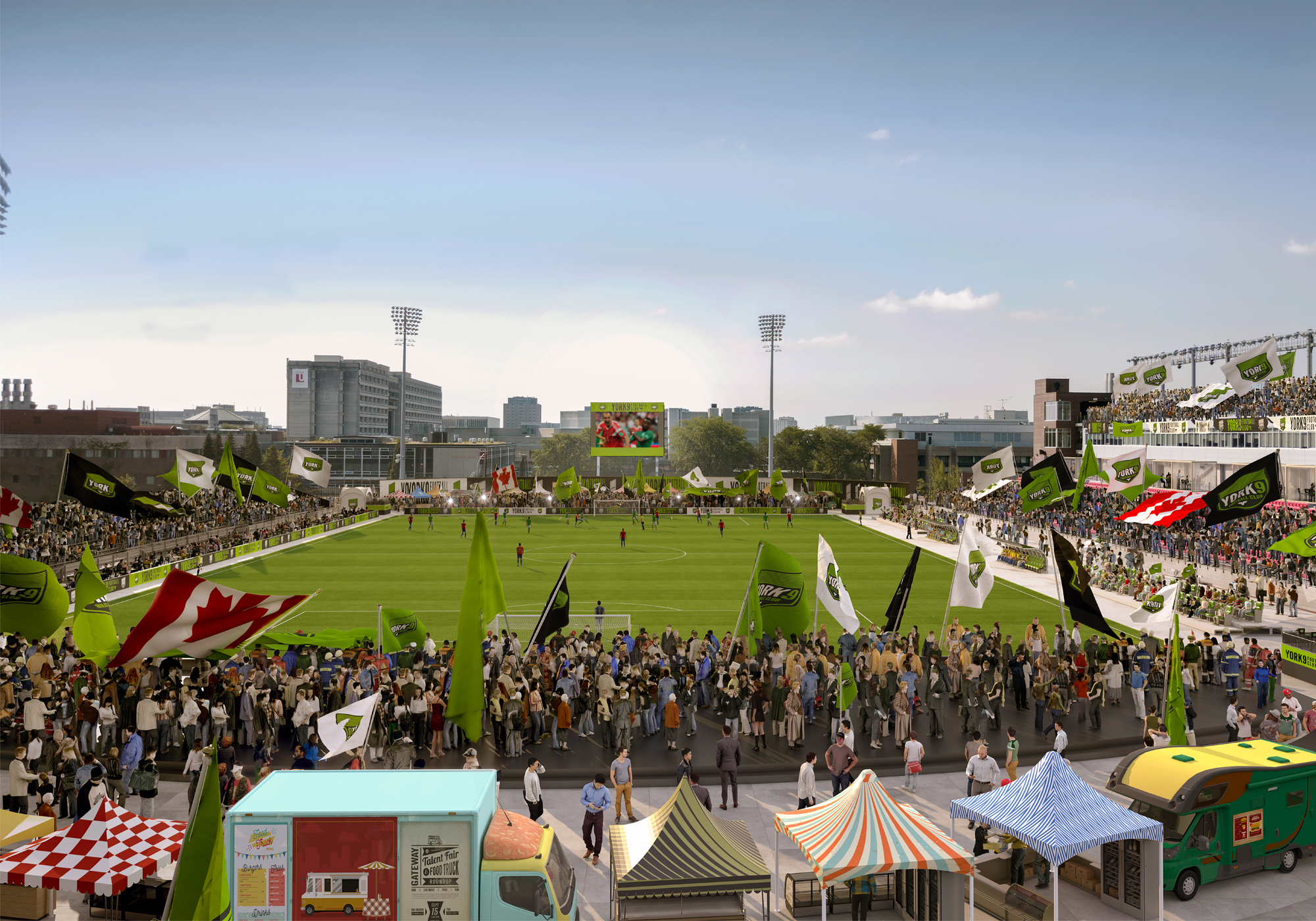 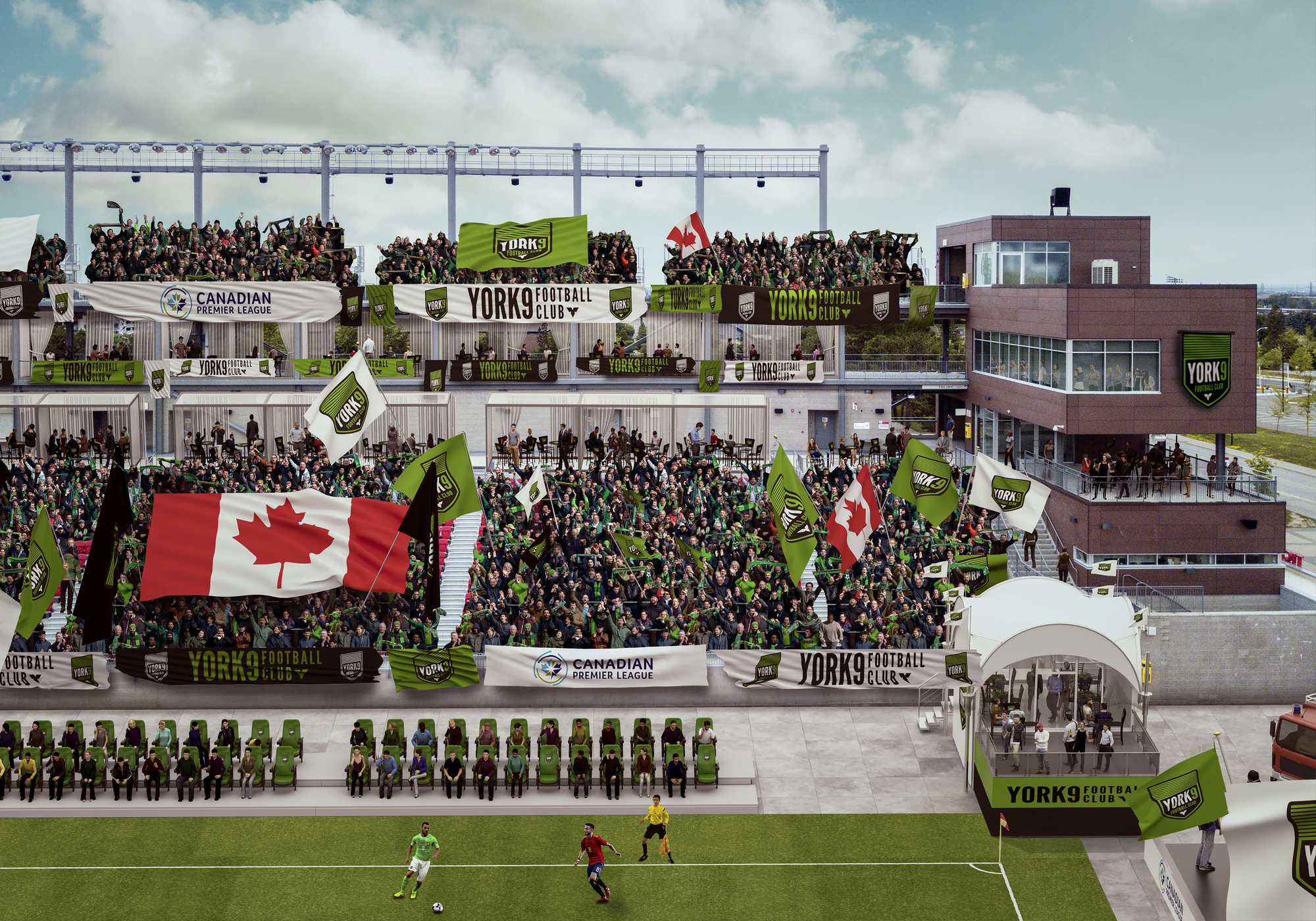 Much more realistic size than the 15,000 seat modular stadium. Should they do well this space has a lot of room for growth too.
Ottawa > Toronto > San Francisco > Vancouver
T

Contra said:
Much more realistic size than the 15,000 seat modular stadium. Should they do well this space has a lot of room for growth too.
Click to expand...

You are confusing me.....their stadium plan is still to build that 15k (actually 12 - 15k) modular stadium somewhere in York Region.....the use of the two stadiums at York U is still, we are told, to get them through the first 3 years while they build their new digs.

TOareaFan said:
You are confusing me.....their stadium plan is still to build that 15k (actually 12 - 15k) modular stadium somewhere in York Region.....the use of the two stadiums at York U is still, we are told, to get them through the first 3 years while they build their new digs.
Click to expand...

Didn't know that was the plan. Makes sense though as then they have 3 years to hopefully build up a following. 15K still seems steep though...
Ottawa > Toronto > San Francisco > Vancouver
T

Contra said:
Didn't know that was the plan. Makes sense though as then they have 3 years to hopefully build up a following. 15K still seems steep though...
Click to expand...

considering they have the lowest ticket sales of any of the original 7 teams ...it is (IMO) an incredible exaggeration of their needs.....but if they do it I don't care...it is their money
H

The more I think about this, the more I'm convinced the team should aim for a permanent structure at VMC. It would certainly help with traveling fans from Toronto. Plus, Vaughan has a huge chunk of the York Region population and is surely going to be the region's major transportation and entertainment hub.
I

Nice looking soccer stadium. Wasn't there another soccer team called York 9 before the Premier League came into being?
Last edited: May 10, 2019
W

Fast-forward to the completion of the first, sort-of test-run season, and York 9's attendance figures at the lowest in the CPL, with an average of 2,723 per home game. 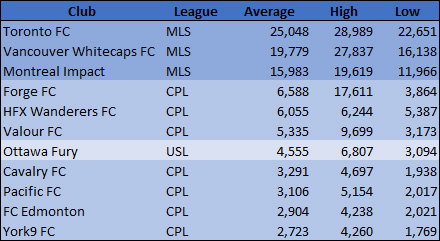 That is not appealing from a stadium-building perspective. The figures from York 9 certainly puts into question how much of the market of the MLS club cities can be split with a nascent CPL team. Doesn't bode well for the Laval expansion bid over in Quebec, but that is a digression.

Notably though, York 9 did pull an attendance figure of 5,252 for the Canadian Championship (cup) match against Montreal Impact, which isn't captured in the above statistics.

From what I gathered from fans online, there were question-marks that should be pointed towards the league (scheduling games during youth soccer programming times, preventing already soccer-engaged residents from attending), the club administration (they supposedly did a poor job of advertising the club's presence). Above all however, there is the common complaint that the stadium at York University is just too far away for fans in Maple, Richmond Hill, and Markham.

If Maple fans, who are 10 minutes away by car, find the location too far, the team is doomed.
N

It kind of sucks to watch soccer in a stadium with a running track.

Was the Canadian Premier League's inaugural season a success? 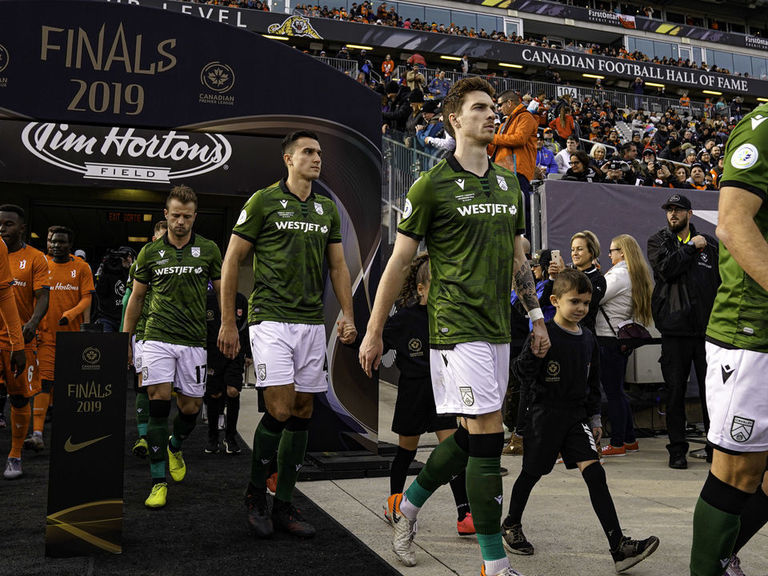 Was the Canadian Premier League's inaugural season a success?

HAMILTON, ONTARIO - For a new competition geared toward developing homegrown players, it's fitting that Tommy Wheeldon Jr. and Bobby Smyrniotis are vying for the Canadian Premier League's first title."We've changed the landscape of Canadian football; it's not just the three MLS teams doing all...

A prominent member of the CPL's leadership group told theScore in May that an average attendance of 4,000 was required to make the league sustainable. That number was surpassed by 266, as single-game attendances ranged from 17,611 taking advantage of free tickets to the league's opener between Forge and York9, to the paltry 1,200 that watched a dimly lit affair between Pacific and HFX Wanderers in October.

"The clubs with the biggest stadiums, they had big crowds, but they got swallowed up in such big stadiums," Hart, who is enamored with the fan culture in the Wanderers' 6,200-capacity home, told theScore. "But still, you could feel that there was some genuine support."
Click to expand...