Excuse me if there's already a thread on this, or if this post belongs in Transportation, but I saw a story on Global (which I usually try to avoid) that the City has proposed to narrow Yonge to three lanes south of Bloor to allow for wider sidewalks. Does anyone have details on this plan? Thanks!
A

I think the idea was on a Toronto Blog but I don't think it was being proposed by the city.
G

CityTV News did a story on that too. Bloor to Front Street I believe it said
B

Yes! Yonge sidewalks are too narrow for the traffic in some places a lot of the time, and it's such a popular stretch for strolls. I think this would really be a huge improvement to the city.
D

Crowded sidewalks are half the fun of Yonge Street.
S

Yonge St's too narrow as is. If the buildings weren't constructed so close to the curb you wouldn't experience crowding of any sort. The parkette around Gerrard for instance or Dundas Sq. Buildings set further aback would allow free flow of pedestrian traffic though I suppose it'd be easier just to narrow the road :rolleyes .
S

I like the idea. A three lane street (not a reverse flow lane) plus bike lanes would be great. The third lane would allow cars to get around obstructions - such as stopped couriers and armoured cars. At some intersections, the centre lane can be a left-turn lane (say at Richmond, Adelaide, Shuter, Gould, Gerrard, where left turns are generally permitted) - I bet with left turn lanes with single-lane driving will result in very little difference in car flows as compared with four lanes, with many obstructions and no turn lanes.

There's no parking anywhere on Yonge anyway, so there won't be any issues with that.

So sidewalks will be a bit wider (about a 75-100 cm on both sides), plus the bike lanes (there is no real continuous north-south bike lane west of Sherbourne)

In Oakville's downtown, the centre lane is used where couriers stop - thereby keeping the traffic lanes open.
A

Yonge St's too narrow as is. If the buildings weren't constructed so close to the curb you wouldn't experience crowding of any sort. The parkette around Gerrard for instance or Dundas Sq. Buildings set further aback would allow free flow of pedestrian traffic though I suppose it'd be easier just to narrow the road .
Click to expand...

If you think Yonge Street is so busy that it needs to be narrowed, then take a look at Shanghai's main street, Nanjing Road...

Nanjing Road used to be like this (early 1990s, I think). The sidewalks are already too crowded, so one lane from either side of the street was fenced off for pedestrians, leaving one lane in each direction for trolley buses and cars...

Here you can see how even the crowds can spill into the streets sometimes...

Same stretch of Nanjing Road today... it's now a pedestrian mall. The only vehicles allowed on it are cheesy little amusement park trolleys with ads plastered all over them.
E

The last one reminds me of the Eaton Centre.
T

Look at the traffic in Shanghai over the reduced lanes.
I can't imagine that here. Either way it works for me as I don't drive and use transit only if I go d.t t.o
N

The City is currently reconstructing the sidewalks and streetscapes on Yonge Street from Front Street to Queen's Quay.

When finished, there will be new lighting, trees and paving.

There will also be bike lanes (approved December 2007) 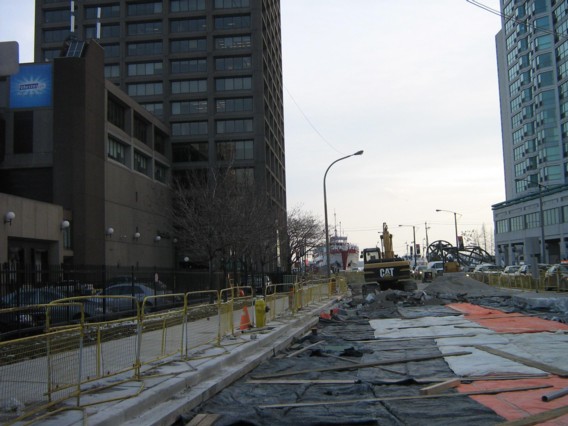 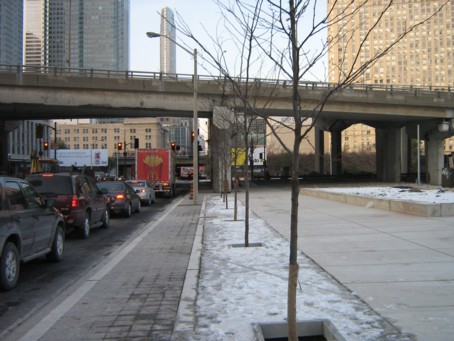