This year-end overview provides an update on all projects within the Union Station east rail corridor. Keeping you informed is important to us, and we look forward to sharing further updates as they occur in 2020.

Don Yard
Don Yard Upgrade & Expansion project has come to a close with the contractor demobilized from site in November 2019. The project delivered 1.5km of upgraded new track work, grading, drainage and servicing upgrades to the Don Yard. With this project coming to a close, the next stage in Don Yard development will begin in late 2020 with the Wilson Yard Expansion project.

Wilson Yard
The Wilson Yard Train Storage Expansion project will enable expansion of storage capacity to support the planned increase in GO Train service. By locating a yard close to Union Station, trains can be stored nearby, while reducing the need to move empty trains long distances. This project will also include removing hydro towers in the area. Construction is expected to begin late 2020.

Pedestrian & Cyclist Connectivity Study
The PCCS was initiated in the fall of 2018, and is currently in Phase 2, which has included identifying preferred options at a conceptual level in consultation with the City of Toronto, Waterfront Toronto and the USRCE CAC Sub-Group for the PCCS. On December 10th, a final presentation on the Phase 2 options was shared with the Sub-Group, before proceeding with the preparation of functional designs and high-level costing in the New Year, as Part of Phase 3. The study is targeted to be completed in spring 2020.

Union Station Enhancement Project
The Union Station Enhancement Project (USEP) is the next improvement scheduled for Union Station. Once completed, the project will encompass wider platforms with canopies, new stairs and elevators connecting to new concourses below. There will be pedestrian connections from the new concourse to Bay and York Streets as well as the concourses to the north and Scotiabank Arena to the south. In addition there will be two new tracks designed to allow for future passenger train speeds up to 45mph, with associated signal works. Storm water management system and other necessary building systems will be incorporated to ensure these improvements meet service needs well into the future.

After suggestions were provided from the industry, this project is being re-tendered using a new procurement (Alliance) model that is a more collaborative approach, sharing risks and responsibilities and gives the flexibility to manage new or changing project risks collaboratively. Request for Proposals was issued on October, 2019.

USRC Signalling System Project Overview
The USRC Signalling System Project (USRC SSP) is part of Metrolinx Signalling and Train Control Improvement Program designed to improve reliability of our signalling and train control systems. The existing system is 90+ years old and is locally controlled from three individual towers (Cherry, Scott and John Streets). Once completed, the new signalling system will reduce signal disruptions and recovery times while allowing operations to be under one control centre, thereby providing a more effective service. The new system will provide higher reliability, be electrification-immunized, meet future RER capacity requirements and interface with the future GO Transit Control System (GTCS). The sequencing in of track circuits will begin in the spring 2021 with the signalling system scheduled to be fully commissioned into service in 2022

Union Station Bus Terminal
The new Union Station Bus Terminal (USBT) is being built in the new CIBC Square at 81 Bay Street. The project is a partnership between Metrolinx and Ivanhoe Cambridge and Hines. The enhanced USBT will give customers a safer, more convenient and more efficient transit experience, with better connections to rail and subway services as well as other popular destinations. The new USBT is being built just south of the rail corridor at 81 Bay Street, and is scheduled to open in 2020.

Bay Street Overbuild Park
In addition to the new USBT, the CIBC Square development includes two office towers and an overbuild park spanning the GO rail corridor. The park spanning the GO rail corridor is designed to connect people with the community, curated activities and nature. The park will be programmed all year-round with food markets, concerts and lively activities, activating the space in the summer, and a large skating rink surrounded by holiday markets in the winter. The Overbuild Park will be a public green space situated over the rail corridor at Bay Street and is expected to be partially opened as part of Phase 1 of the project in 2021 and fully opened as part of Phase 2, at the beginning of 2024.

New Generator Project
To ensure that Union Station remains fully operational in the event of a significant power outage, a new emergency generator will be positioned east of the Scott Street Tower. A substation will be housed in the Bay East Teamway, where conduits will run to the generator further east. Associated work included a new condenser unit on the Union Station train shed roof and the restoration of the Yonge Street bridge trainman's walkway.
The reason for this installation is to increase capacity of backup power, to accommodate future development and expansion of Union Station. The generator is anticipated to be installed in December 2019, where testing will ensure that it is fully operational by the end of February 2020.

​
Union Station Rail Corridor Maintenance work impacts
Track maintenance is ongoing and at times unable to be prescheduled. As safety remains our top priority, work crews continually assess the condition of rails, joints, ballasts and frogs, and in some cases emergency work must be performed. In 2019 a lot has been done to reduce the number of rail joints, and as a result contributed to a reduction of operational noise from the corridor. These improvements include 700 track ties replaced throughout various locations from Jarvis to Cherry Street, track replacement in 200 foot sections over the Jarvis St Bridge and at Cherry Street, and 500 feet of worn rail near Eastern Avenue.

What's on track for 2020 maintenance work impacts include 500 to 1000 track ties to be replaced at various locations between Jarvis to Cherry Street, track replacement in 200 foot sections over the Sherbourne St Bridge, and other tentative track replacements, as scheduled work blocks and safety protocols will permit, all further contributing to a reduction in rail joints and noise impacts.

On the Horizon - OnCorr
Metrolinx is working to bring communities across the region more GO Train service to get you where you need to go — better, faster and easier. GO Expansion means reliable and efficient service every 15 minutes or better, two-way, all-day, during the evenings and on weekends, in core areas of the GO network. To deliver this service, Metrolinx is planning to build new track and signals, construct new rail facilities, modify and build bridges, improve crossings and build electrification infrastructure across the GO network. To support the program, Metrolinx will host public meetings in the New Year to share more information with the communities we serve. As a recipient of this newsletter, you will receive an invitation to attend. Please look out for more details in early 2020.
Click to expand...

Don Yard
Don Yard Upgrade & Expansion project has come to a close with the contractor demobilized from site in November 2019. The project delivered 1.5km of upgraded new track work, grading, drainage and servicing upgrades to the Don Yard. With this project coming to a close, the next stage in Don Yard development will begin in late 2020 with the Wilson Yard Expansion project.

Wilson Yard
The Wilson Yard Train Storage Expansion project will enable expansion of storage capacity to support the planned increase in GO Train service. By locating a yard close to Union Station, trains can be stored nearby, while reducing the need to move empty trains long distances. This project will also include removing hydro towers in the area. Construction is expected to begin late 2020.
Click to expand...

These two projects might be affected by the Ontario Line, which is planned to be built in the rail corridor.

From the March WT DRP:

Usually okay with acronyms, but somewhat stumped this time. What's a HONI?
M

Usually okay with acronyms, but somewhat stumped this time. What's a HONI?
Click to expand...

The bridge would only carry utilities, no people or vehicles.

The bridge would only carry utilities, no people or vehicles.
Click to expand...

To replace the Hydro One overhead on south side of the tracks, I assume. The document says that these wires/towers are going.
Last edited: Apr 1, 2020

From the SLNA newsletter:

Maintenance Work for this period: April 17-26 (night)
Maintenance crews will be changing ties along Tracks E1 and E2 at Scott Street, April 15-16, and may extend past this date weather impacting. As well, Plank Removal is scheduled for Monday, April 20 east of Station Depot on Track 3. The use of hydraulic tools, some heavy machinery and backup beepers may create noise experienced by some neighbouring residents.

Signalling System Upgrade Project
Please note that all signalling and communications work that was to be scheduled for the USRC East region is deferred until appropriate safety measures can be implemented with our sub contractors. An update to the schedule will be shared once it has been determined.  ADVANCED NOTICE: The weekend of May 10-12, there will be Caisson Installation at Scott Street. More information and timelines will be communicated closer to the date.

"We recognize that this work will be disruptive to residents and we are doing our best to carry out essential construction with the least disruption possible. Tracks must be taken out of service to complete this work and as a result this work can only be carried out during off-peak times, when there is less train traffic. Nearby residents will notice activity from power tools (grinding, hammering and welding) and equipment movement during this time with associated noise impact."

If you have any questions please email TorontoEast@Metrolinx.com.
Click to expand...

Allandale25 said:
From the SLNA newsletter:
Click to expand...

This was actually an extract from a far longer Metrolinx 'bulletin'. If you want your own copy of the whole thing (it comes out weekly) you can sign up at https://metrolinx.us4.list-manage.com/subscribe?u=e3e2dcbefa63d1ca424de38bb&id=d003ab5b57
U 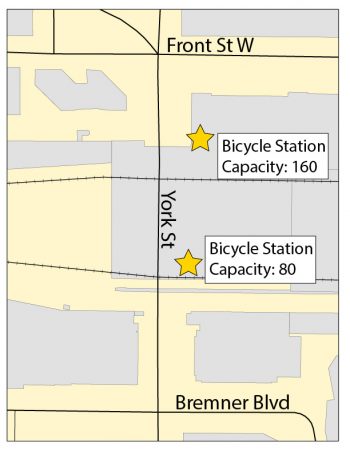 The Bicycle Station at Union Station consists of two secure bicycle parking rooms on the east side of York St. — one just south of Front Street, and a smaller room just north of 25 York St. (at Bremner Blvd.) The larger facility features 160 bike racks, a washroom, a change room and a shower with complimentary towels, and an office where staff can register new members and renew bike station parking plans

The smaller facility features 80 bike racks, and a washroom/change room.

Tools and pumps are available at both locations, for members to perform minor repairs.
Click to expand...

Now compare with the 5,000 bicycle racks in the underground bicycle parking facility at the Central Railway Station of Delft (Netherlands).

From the July WT DRP:

Interesting stuff! So they want to build a cycle track on Jarvis from the Esplanade to QQ, as well as much improved and widened pedestrian space along the east side of the street. I like it. I've long thought something needed to be done with that underpass given how key an access it is to the waterfront from the St Lawrence and how awful a connection it is for anyone that isn't in a car.
N

Images from the DRP report: 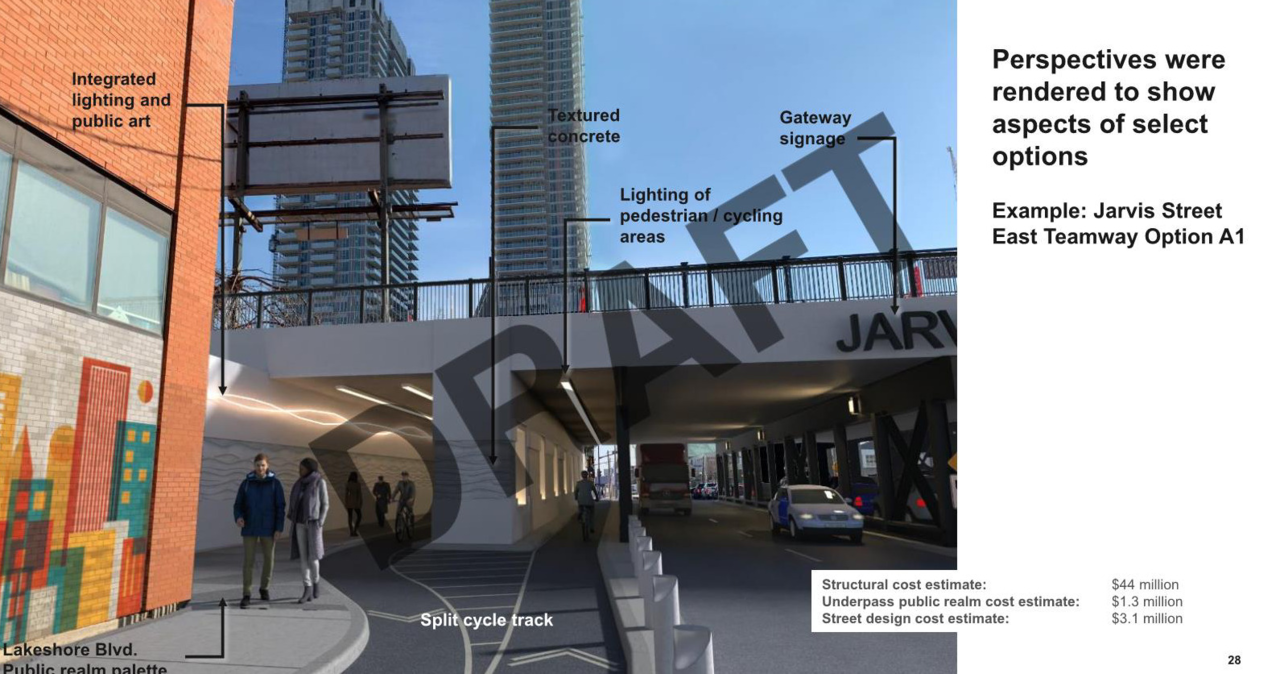 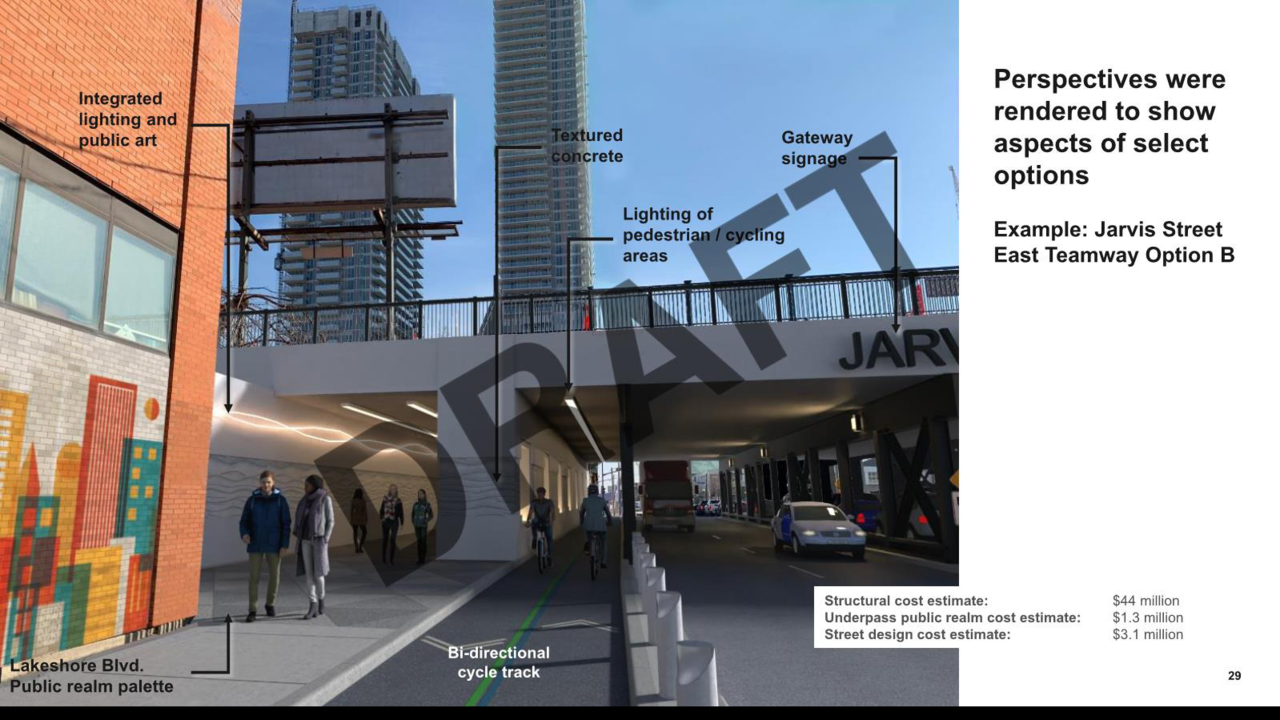 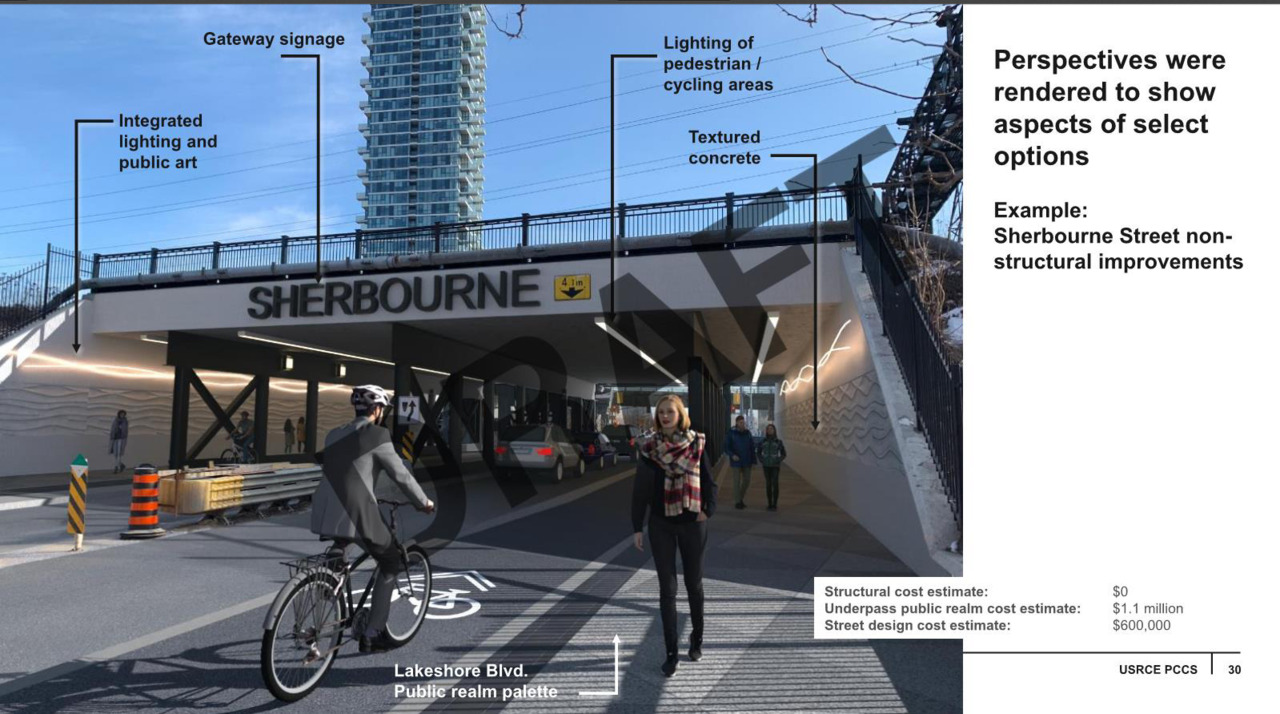 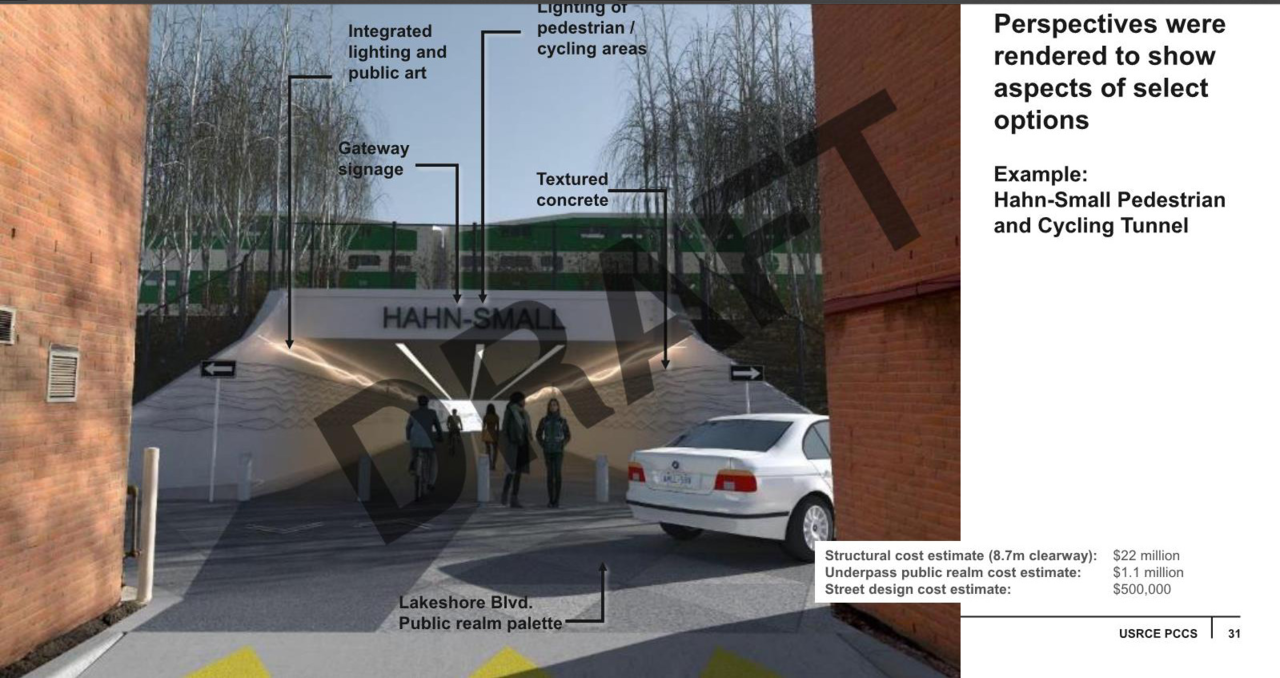 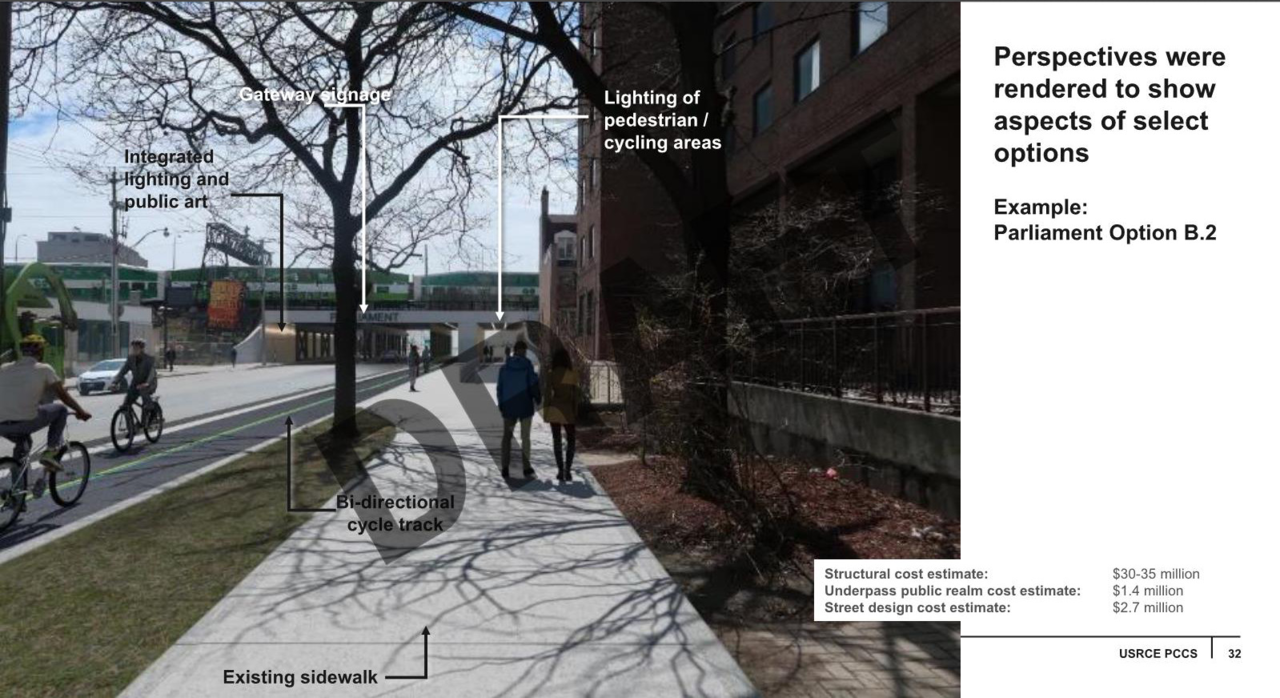 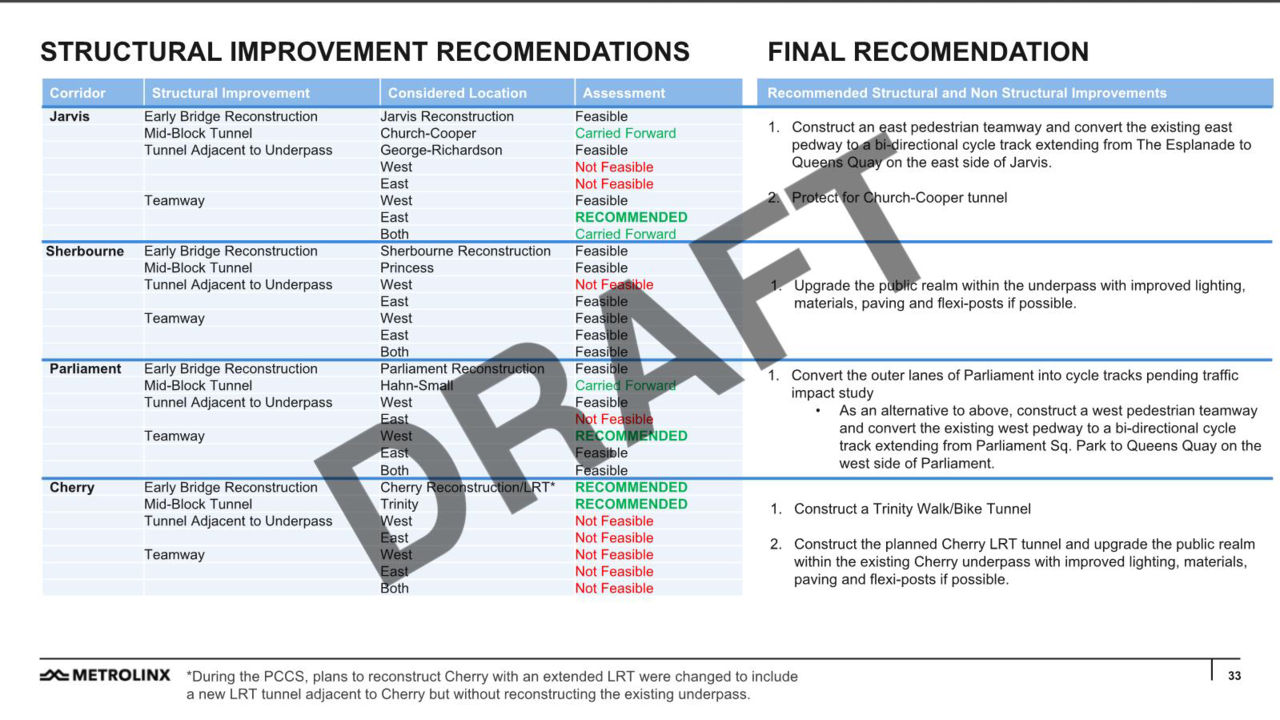