The former Lever Brothers site may become a real anchor for the east end of Toronto, but only if the city can access it.

â€œThis is the make or break of this project,â€ said Derek Goring, vice president of development at First Gulf Corp., on connecting transit to the proposed mixed-use commercial and retail site on the 28.5 acre grounds near Lake Shore Boulevard East and the Don Roadway.

During a community consultation meeting on Tuesday night, March 3, Goring said plans for the former soap factory were largely contingent on three â€˜Rsâ€™: road, river and rail. He pointed out what made the site unique was its proximity to major transit arteries, but that were functionally serving as barriers due to their inaccessibility.

Overcoming challenges such as the siteâ€™s location on the Don River flood plains and reconfiguring the Gardiner and DVP to connect to the extensive area just south of Eastern Avenue were also mentioned.

Still, First Gulf Corp. cast its vision to add a business employment hub for the grounds that have been inactive for years. Goring said the development would boast vast office and retail space that could generate 50,000 new jobs in a $6-billion project.
More...........http://www.insidetoronto.com/news-s...r-lever-brothers-site-key-to-its-development/ Edward Nixon wrote this on the "City-Building Toronto" Facebook group:

As First Gulf made clear this is a long-term project. They know there are 20+ office buildings in various states of construction, approval, application or proposal, between Spadina and Parliament, south of Queen. So their planning is for office demand beyond that. So it's 2020s - 2030s in terms of build out, similar to the Lower Don Lands. Their transit "demands" are both sensible and (in a good way) self-serving. Though their laser-like focus on a Smart Track or GO RER stop near their site may come into conflict with the arguably compelling case for similar express rail stop between Cherry and Parliament to serve the West Don Lands, Keating Channel, Distillery District and eastern St. Lawrence.

If the DRL were ever built (ok when it's built) the case for stations -- such as Unilever, Distillery, St. Lawrence Market -- will be more obvious and in keeping with subway station spacing in the core.

edwardtoronto said:
Their transit "demands" are both sensible and (in a good way) self-serving. Though their laser-like focus on a Smart Track or GO RER stop near their site may come into conflict with the arguably compelling case for similar express rail stop between Cherry and Parliament to serve the West Don Lands, Keating Channel, Distillery District and eastern St. Lawrence.
Click to expand...

I agree that the GO station would probably be better suited somewhere west of the Don River. I don't feel like starting another fantasy transit debate, but I just wanted to opine that I think the DRL is sufficient enough to serve the area. A subway station could be in the middle of it all, compared to a GO station located at the very edge of the Unilever lands. GO riders can simply transfer to the DRL at Gerrard or Union station if they want to get here. I don't see the problem with that. 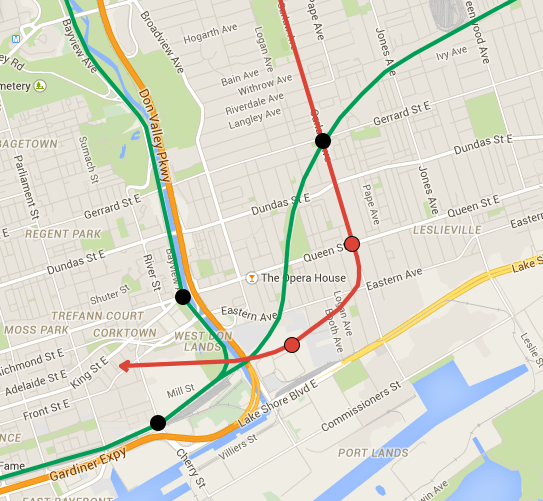 First Gulf is absolutely right to make this proposal conditional on transit. There are a ton of possible solutions, which for Toronto is actually a problem because each Councilor will want their pet project to be 'the answer'.

My personal favourite would be a combination of your GO RER from the east and a QQ LRT from Union that went all the way through to Leslie Barns, with spurs/stations at Unilever and down into LDL.

Here's hoping the QQ rebuild / Pan Am Village focus this summer sparks some serious interest in finishing WT's vision by tearing down the Gardiner East and putting rapid transit into the mix for the street level 'Avenue Corridor' replacement for it.

the drl could always have a short jog from pape to carlaw.

innsertnamehere said:
the drl could always have a short jog from pape to carlaw.
Click to expand...

I assumed Carlaw because it's a 4 lane road and it intersects so perfectly with the GO station, 506 streetcar, and 72 Pape bus. But yes north of Gerrard the subway would have to swing over to Pape, especially if it's to go beyond Danforth.
Last edited: Mar 5, 2015
A

What I like about this is that it is an impetus to actually build more transit. Government doesn't seem to want to spend on areas that already exist (see Liberty Village), but proposals like this are Tax Increment Financing winners and are ribbon-cutting opportunities for the politicos. But I do worry is that GO RER is replacing the DRL.

Even if we only get GO RER, why can't we have more stops downtown? I lived in Berlin last summer and their S-Bahn had pretty tight spacing in many parts of the city. Is this unfeasible here? Or is it just focusing on the commute times of people in Brampton and Mississauga?

agoraflaneur said:
Even if we only get GO RER, why can't we have more stops downtown? I lived in Berlin last summer and their S-Bahn had pretty tight spacing in many parts of the city. Is this unfeasible here? Or is it just focusing on the commute times of people in Brampton and Mississauga?
Click to expand...

If they don't run it like the existing GO, there are no reason why adding a few more stations will keep people from Brampton and Sauga from using it (especially if the system offers greater utility in the core through additional stations).

The question was, is GO RER just focusing on commute times for people in Brampton and Mississauga? And the answer may as well be yes, GO RER heavily focuses on the 905.

SmartTrack hopefully pushes the scope back to the 416, I hope this means more stations and tighter spacing in the downtown core like in the S-Bahn and other like systems.
D

If the site ever was developed with >10million sqft of office space (+ associated retail...), it would be reasonable to skew pretty much all transit projects to serve it. Regardless of what happens with the WDL and DD those areas will never have the employment density to really draw much transit ridership.

It just seems kind of... incredible that there will be demand for that much office space in Toronto in our lifetimes. Like, this is almost bordering on hucksterism. There are so many other commercial projects in the core. The office market may be tight now, but will it be tight forever?

Not to cynical, but it wouldn't be the first time a development company has made inflated promises of development to get, essentially, hundreds of millions in infrastructure work picked up by the Govt. The whole idea of having transit lead development seems impractical when there are existing unserved transit needs.

Estimates I've seen indicate that the GTA will need about 100 million additional square feet of office space over the next 25 years. That is needed to accommodate the additional 3 million people expected to live here by then. That's 50 towers the size of First Canadian Place.
Twitter: https://twitter.com/edwardskira
FaceBook: https://www.facebook.com/edward.skira
Instagram: https://instagram.com/edwardskira/
Linkedin: https://ca.linkedin.com/in/edwardskira
M

10 million square feet isn't that much all things considered. I hope you are quite old by your suggestion. The downtown area of Toronto has always managed to absorb new space in good times even when the suburbs of trending. Sure we saw a couple decades go by without a significant office tower being built but, walk through the warehouse districts before and after to see that inventory was still increasing by millions of square feet.
got some ice to sell you
You must log in or register to post here.
Share:
Facebook Twitter Reddit Pinterest Tumblr WhatsApp Email Share Link