Ridiculous comments and claims made by City Councillors

I live in Denzil's ward. I think the problem is that people out here are just disengaged. The suburbs, in general, are where most families live, therefore I think priorities are more meat and potatoes (as you suggested, potholes, road conditions, snow removal in winter, etc.). Periphery issues like heritage, arts and culture, public realm, etc. aren't even really on the radar of said individuals. Plus, parents are too busy raising their children to have the time to be concerned with those aforementioned subjects. Also, Denzil is a family man and that appeals to other families in the ward. He can get away with being a ghost in his ward, that only comes out every 4 years when it's election time, because basically no one is paying attention to what he is doing. Taxes remain low and quality of life remains the same, therefore, he must be doing a good job (is the mentality, I assume, many share). Denzil is also financially backed by wealthy individuals, so he is able to get his name out in the community better than any of his opponents. It's probably going to take another person with deep pockets and the ability to pick apart Denzil's demagoguery to defeat him at the ballot box. I don't have much hope that this will happen (Peter Youngren, in 2010, was his greatest challenge). I can actually see Denzil representing Ward 34 until he decides to retire. I think he will only be replaced if term limits are implemented.

I assume most of Mary Hynes' votes came from the apartment and townhouse complexes in Ward 34. She's an NDPer and this ward is pretty conservative. I even voted for her and I'm right of center, socially. I was just so desperate to get rid of Denzil.
Click to expand...

Incumbency is a powerful thing. Only one sitting councillor lost last time.

I was disappointed when I googled Karygiannis. I assumed he'd be one of the stars of this thread but I didn't find much.
Click to expand...

He was my MP for a very long time, but I didn't pay a lot of attention to him due to a lack of interest in politics (I was young). His attendance record was also dismal.
Last edited: Feb 4, 2016
Death to Videodrome! Long live the new flesh!

Do we need to start an international incident over a football game? Her show will happen and no rambling from Worms or Jimmy K will change that.
Death to Videodrome! Long live the new flesh!

I see that two of the stupidest Councillors are both quoted in Worms' 'article'. I assume the more sensible ones will not talk to him.

"Karygiannis called the whole approach “disturbing” at a time when “we should not be promoting gun culture or anti-police sentiments.”

Councillor Giorgio Mammoliti agreed her “performance was distasteful” and “was a subtle message that was not subtle but in fact loud.”"

If he had only had a quote from Rofo it would have been a perfect trifecta.
A

Yet another example of why Karygiannis is an outright joke. How does Beyonce's Super Bowl Halftime show have any implications to Toronto whatsoever? Oh that's right, it doesnt. But he comes out and says that we should ban her from entering Canada?

I thought his job was to focus on his local constituents issues, not what is going on at an American entertainment event. Clearly he has no idea what his priorities are/should be.

That was some fine backtracking by Jimmy K.
Death to Videodrome! Long live the new flesh!

DSC said:
Councillor Giorgio Mammoliti agreed her “performance was distasteful” and “was a subtle message that was not subtle but in fact loud.”"
Click to expand...

Mammo verging on Nigel Tufnel territory there, like a mash-up of 'such a fine line between clever and stupid' and 'these go to eleven'.
P

But on the plus side, the more time Jimmy K and Mammo spend on the Beyoncé issue, the less time they'll have to try to influence stuff that actually matters. Unless they can multitask, but that would require higher-order brain function.

pman said:
But on the plus side, the more time Jimmy K and Mammo spend on the Beyoncé issue, the less time they'll have to try to influence stuff that actually matters. Unless they can multitask, but that would require higher-order brain function.
Click to expand...

Yeah. Karygiannis' brain basically reverts to Uber whenever it's idle and Mammo's has an area entirely devoted to moral panic/sex work.

Matt ElliottVerified account‏@GraphicMatt
Councillors struggling to understand this motion by Coun. Karygiannis. I am baffled by it.
Click to expand...

Matt Elliott ‏@GraphicMatt 58s58 seconds ago
Karygiannis' incomprehensible motion about funding transit in his ward or something FAILS 2-40.
Click to expand... 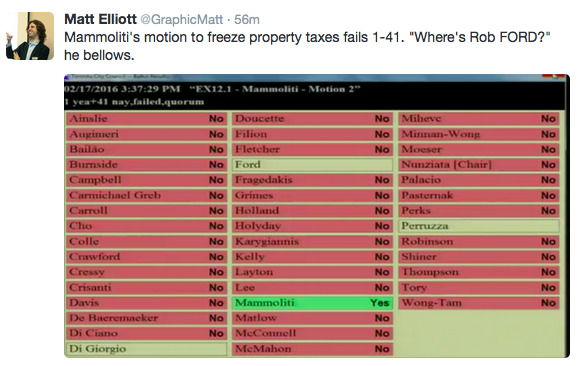 Are Mammolitti and Karyggianis trying to one-up each other today?
~ Resident Midtown elitist and PATH enthusiast

WislaHD said:
Are Mammolitti and Karyggianis trying to one-up each other today?
Click to expand...