NYT: Future Vision Banished to the Past

Future Vision Banished to the Past
By NICOLAI OUROUSSOFF
Published: July 6, 2009
TOKYO â€” How old does a building have to be before we appreciate its value? And when does its cultural importance trump practical considerations?

Those are the questions that instantly come to mind over the likely destruction of Kisho Kurokawaâ€™s historic Nakagin Capsule Tower.

A rare built example of Japanese Metabolism, a movement whose fantastic urban visions became emblems of the countryâ€™s postwar cultural resurgence, the 1972 Capsule Tower is in a decrepit state. Its residents, tired of living in squalid, cramped conditions, voted two years ago to demolish it and are now searching for a developer to replace it with a bigger, more modern tower. That the building is still standing has more to do with the current financial malaise than with an understanding of its historical worth.

Yet for many of us who believe that the way we treat our cultural patrimony is a fair measure of how enlightened we are as a society, the buildingâ€™s demolition would be a bitter loss. The Capsule Tower is not only gorgeous architecture; like all great buildings, it is the crystallization of a far-reaching cultural ideal. Its existence also stands as a powerful reminder of paths not taken, of the possibility of worlds shaped by different sets of values.

Founded by a loose-knit group of architects at the end of the 1950s, the Metabolist movement sought to create flexible urban models for a rapidly changing society. Floating cities. Cities inspired by oil platforms. Buildings that resembled strands of DNA. Such proposals reflected Japanâ€™s transformation from a rural to a modern society. But they also reflected more universal trends, like social dislocation and the fragmentation of the traditional family, influencing generations of architects from London to Moscow.

Of the five members who made up the group, Kurokawa was the most glamorous. A photo taken in 1958 at a Moscow student conference, when he was just 24, shows him surrounded by fawning girls, signing autographs. Trim and handsome, often outfitted in elegantly tailored suits and a bow tie, he became a regular at Tokyo nightclubs. His Space Capsule Disco, opened in the 1960s, was a hot spot for young creative types.

The Nakagin Capsule Tower was completed as the movementâ€™s influence was beginning to wane. Composed of 140 concrete pods plugged into two interconnected circulation cores, the structure was meant as a kind of bachelor hotel for businessmen working in the swanky Ginza neighborhood of Tokyo.

Inside, each apartment is as compact as a space capsule. A wall of appliances and cabinets is built into one side, including a kitchen stove, a refrigerator, a television and a tape deck. A bathroom unit, about the size of an airplane lavatory, is set into an opposite corner. A big porthole window dominates the far end of the room, with a bed tucked underneath.

Part of the designâ€™s appeal is voyeuristic. The portholes evoke gigantic peepholes. Their enormous size, coupled with the small scale of the rooms, exposes the entire apartment to the city outside. Many of the midlevel units look directly onto an elevated freeway, so you are almost face to face with people in passing cars. (On my first visit there, a tenant told me that during rush hour, drivers stuck in traffic often point or wave at residents.)

But the projectâ€™s lasting importance has more to do with its structural innovations, and how they reflect the Metabolistsâ€™ views on the evolution of cities. Each of the concrete capsules was assembled in a factory, including details like carpeting and bathroom fixtures. They were then shipped to the site and bolted, one by one, onto the concrete and steel cores that housed the buildingâ€™s elevators, stairs and mechanical systems.

In theory, more capsules could be plugged in or removed whenever needed. The idea was to create a completely flexible system, one that could be adapted to the needs of a fast-paced, constantly changing society. The building became a symbol of Japanâ€™s technological ambitions, as well as of the increasingly nomadic existence of the white-collar worker.

No one doubts how difficult it would be to revive that vision today. The building was never as flexible in reality as it was in theory: adding and removing the capsules was prohibitively expensive. And the capsule notion itself was obviously limited, since it didnâ€™t account for the possibility of sharing space with others. It hasnâ€™t helped, too, that the lack of regular maintenance has taken a severe toll on the structure â€” and on the few remaining tenants.

When I visited several weeks ago, it was pouring rain. Corridors smelled of mildew. Some tenants had taped plastic bags to their door frames to catch leaks, and many of them were bulging with gray water. At one point a tenant took me up to a bridge that connected the two towers, where I could see chunks of concrete breaking off from the corner of one of the capsules. Nothing short of a full-scale restoration would save it.

But the issue is not just the fate of this one building; it is why certain landmarks â€” in Japan and throughout the developed world â€” are preserved, and others are not. Dozens of private houses, after all, from Palladian villas to late Modernist masterpieces, have been lovingly restored over the years, some in worse condition than the tower. Government agencies and nonprofit groups have also put significant amounts of money toward the restoration of important civic works.

But when an aging Kurokawa pleaded with the apartment owners to save his masterpiece, he got nowhere. And after his death two years ago, few preservationists rallied to the buildingâ€™s defense. Thereâ€™s been no serious effort to look into what exactly it would cost to retrofit the 140 units. Nor has any institution, public or private, stepped up with a viable plan for how to save it.

Why is that so? Partly it is because all over the world, postwar architecture is still treated with a measure of suspicion by the cultural mainstream, which often associates it with brutal city housing developments or clinical office blocks. Partly, too, it has to do with the nature of housing blocks in general. They are not sexy investments; they do not feed an investorâ€™s vanity or offer the cultural prestige that owning a landmark house does.

But another concern is that all too often, private developments like the Capsule Tower, no matter how historically important, are regarded in terms of property rights. They are about business first, not culture. Governments donâ€™t like to interfere; the voices of preservationists are shrugged off. â€œWant to save it?â€ the prevailing sentiment goes. â€œPay for it.â€

Until that mentality changes, landmarks like Kurokawaâ€™s will continue to be threatened by the wrecking ball, and the cultural loss will be tremendous. This is not only an architectural tragedy, it is also a distortion of history. 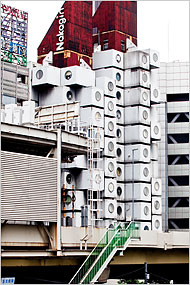 My own photo of this structure shows a bit more ...

When I came across this in Tokyo I had essentially given up trying to find interesting buildings in the city, as it is so very difficult to find your way around in the absence of street addresses. So I was very pleased to find this tower, wedged in near one of the ubiquitous overhead expressways - it was like a little gift.
W

Reminds me of Habitat 67 for some reason.
The gov't needs to step in and slap historical status or something to that effect on this sucker... Tokyo (much like Seoul - where I live) was rebuilt from the ground up not too long ago and with that has very little in the way of inspiring architecture. A tragic loss that they'll surely regret when the time comes.

What an idiotic concept - a multi-unit residential building with 140 different owners who must each completely replace their pod every 25 years.

Tokyo was absolutely miserable from a preservation point of view. I saw the most egregious examples of facadism there that I've seen anywhere, and almost no examples of non-religious buildings of any age being preserved. Most examples of slightly older buildings were in terrible shape, just waiting to be ripped down.

Japanese cities have some fantastic modern buildings, but they seem largely uninterested in heritage that doesn't involve temples or shrines. It's a shame.

A couple of rather poignant video interviews with Kurokawa about his "recyclable" and "sustainable" Nakagin - which he describes as "the first building of its kind in the world" as if he was still bravely expecting imitators. Problems caused by not replacing almost the entire structure every quarter century ( " a really stupid mistake ..." ) were compounded by a poorly thought out ownership model. Really, one doesn't know whether to laugh or to cry:

Tokyo can't easily designate buildings untouchable like, say, Zurich. It could, but there are already such strains on supply/demand for land that constraining it more to satisfy relatively small part of the society isn't terribly popular. The same would go for somewhere like Hong Kong. I don't see it as possible to ever render this habitable

Also, doesn't heritage preservation defeat the entire point of the Metabolist movement? I thought the idea was to create flexible and modern housing solutions for a changing society. I don't see how forcing people to live in rundown housing units fits that goal.
*Give me convenience or give me death*

In the video, Kurokawa maintains that one of the reasons the Nakagin was falling apart was because the generation that inherited capsules from the first owners wasn't interested in replacing them with brand new pods. Rather than building for sustainability, he seems more interested in planned obsolescence - he talks about the pods - which must be replaced every 25 years (!) - as if they're Hondas. For me, the issue that this building represents boils down to what happens when pure design is divorced from practical considerations. We've got the "magic ingredient" of aesthetics ... without a sensible connection to economics and function.
L