Picked up what?
N 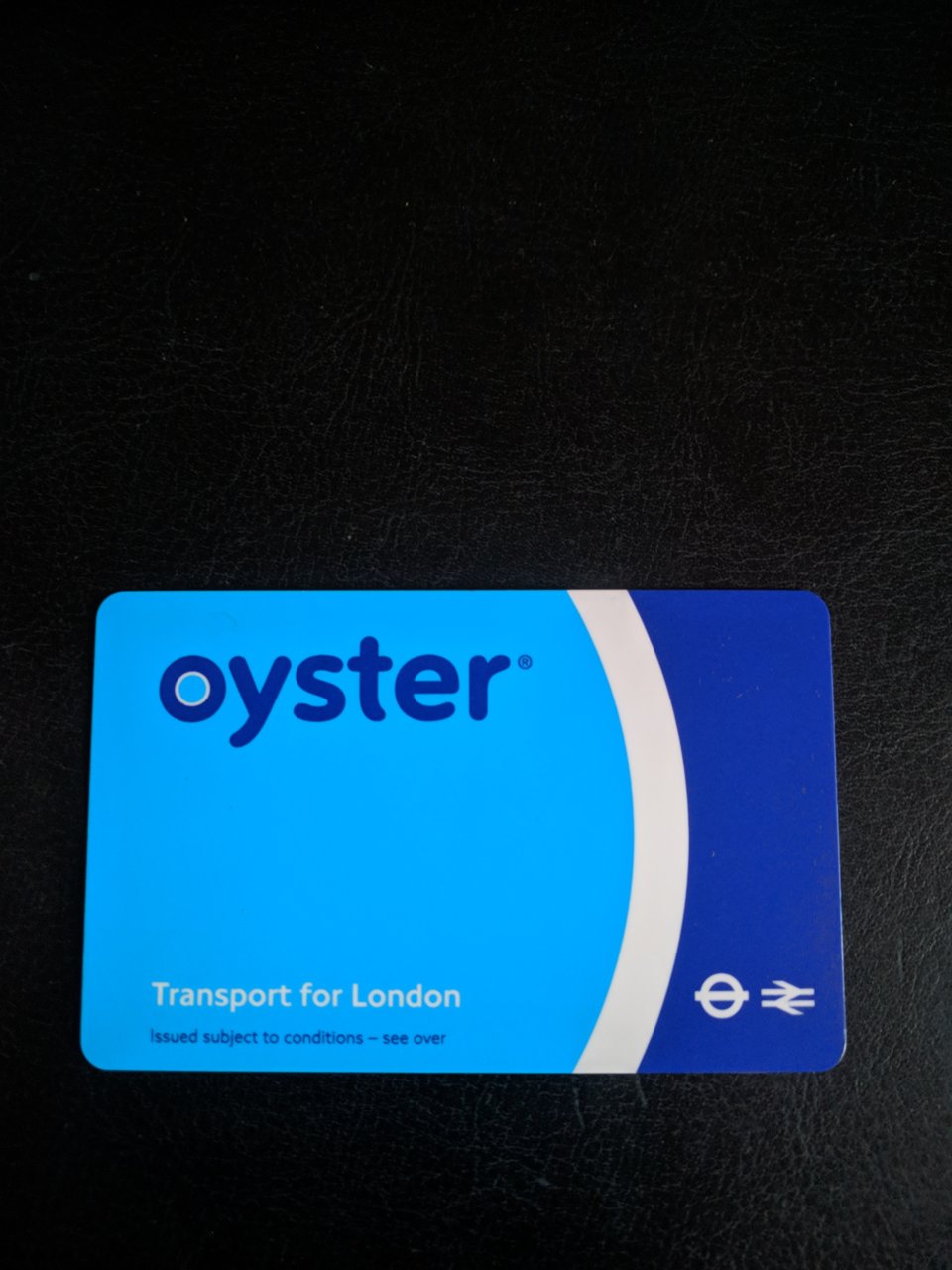 @Richard White See above. Was formatting my post and didn't post the photo properly the first time around.
2017 STWM Half Marathon 1:43
2018 STWM Full Marathon 4:18

Why do I need to tap my card within 30 days of performing a transaction online or by phone?

If you don't tap your card on a PRESTO device within 30 days of any transaction, with the exception of transit passes, it will expire. For financial transactions, your method of payment will be refunded. If you want to reactivate an expired transaction, please call us at 1-877-378-6123.
Click to expand...

They need to change the transaction activation occurring within a year, not 30 days.
[SIGPIC][/SIGPIC]W. K. Lis

After someone mentioned to me about three months ago how common they thought fare evasion on TTC buses had become, I noticed on every trip (it may only be about three times a month that I use a TTC bus route) at least once I will hear that "rejected" noise from the PrestoCard reader of someone quickly swiping their empty card and walking past the driver, who just ignores them. Otherwise responsible adults (or so I would assume) see others getting away with it, and think "Why should I pay if they don't?", and use their empty PrestoCard as a perpetual "ride for free" pass. People were particularly doing it at the last stop just before a bus would turn into a subway station, knowing their empty PrestoCard won't get them through the automatic gates at the subway station.

Today on the 25 Don Mills bus, I finally saw a driver tell a guy doing this to pay cash or get off. Displaying what an entitled A-hole attitude some have developed about being allowed to ride without paying, as the guy got off he said something like "Fine, I'll just get on the next bus then."
Last edited: May 21, 2019
N

All great, but TTC needs to fix some Presto things before going hardline on those who tap and get the error beep.

That beep might mean "insufficient funds". But it might also mean you've already tapped a few seconds before on the same vehicle - " already tapped".

nfitz said:
All great, but TTC needs to fix some Presto things before going hardline on those who tap and get the error beep.

That beep might mean "insufficient funds". But it might also mean you've already tapped a few seconds before on the same vehicle - " already tapped".

Now that TTC transfers use a time window shouldn't the second tap just be treated as a transfer and give the same 'approved' ding? Why complicate things with a bogus reject noise...
R

KevinT said:
Now that TTC transfers use a time window shouldn't the second tap just be treated as a transfer and give the same 'approved' ding? Why complicate things with a bogus reject noise...
Click to expand...

It's a mechanism to prevent pass-backs. A reader only accepts the card once for a brief period of time (a couple minutes).

rbt said:
It's a mechanism to prevent pass-backs. A reader only accepts the card once for a brief period of time (a couple minutes).

The swipe Metropass readers worked the same.
Click to expand...

Thanks, that makes sense. Guess I just don't think like a thief, that never even occurred to me...
N

rbt said:
It's a mechanism to prevent pass-backs. A reader only accepts the card once for a brief period of time (a couple minutes).
Click to expand...

Yes - though I think it's at least a 5-minute lockout on streetcars. The problem is, when two people entering the back doors of an (old) streetcar both put up their Prestocards at the same time, and it beeps ... well my wife did it, and both people thought the OTHER person had tapped. And then she tapped it was "rejected". She tapped again about 3-4 minutes later when she got off, at the other door - but it still rejected.

She assumed her card was broken (and she'd tapped about 30 minutes earlier on a different route). It was only reviewing the log much later that it was apparent that it was probably a card clash ... and the first rider likely got a free ride (unless they too were transferring or had a pass).

Having the exact same response for "insufficient funds" and "already tapped" is a problem. Operators can't just starting tossing people off vehicles then, without using a device to scan the cards themselves!
Last edited: May 22, 2019

I'm a transit nerd and I still can't wrap my around these instructions.

mjl08 said:
I'm a transit nerd and I still can't wrap my around these instructions.
Click to expand...

And to top it all off, the very reason Metrolinx states for not having Presto terminals on the platform is that it "encourages fare cheats" (If a cheat sees an inspector, they'll hop off and tap on the platform stalk, and hop back on again) so what have they done at Bloor? 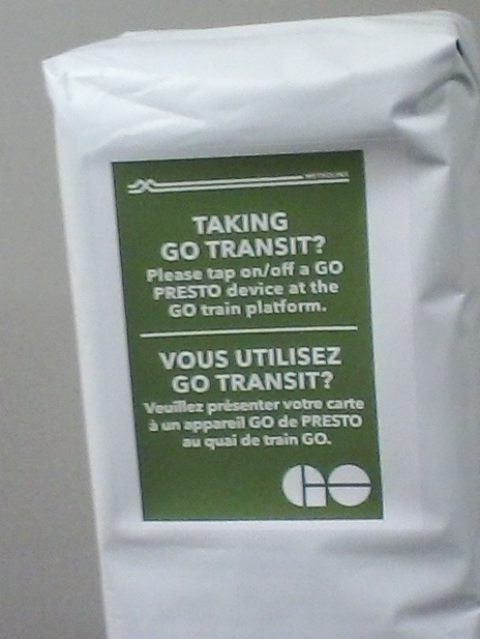 From the same people who put everything possible on an elevator that has two floors except an arrow pointing up, and one down. But they stick "UP" on it, so people who can barely speak English think that's the direction, not the train. And call the basement "Ground Floor". Ffffing geniuses... 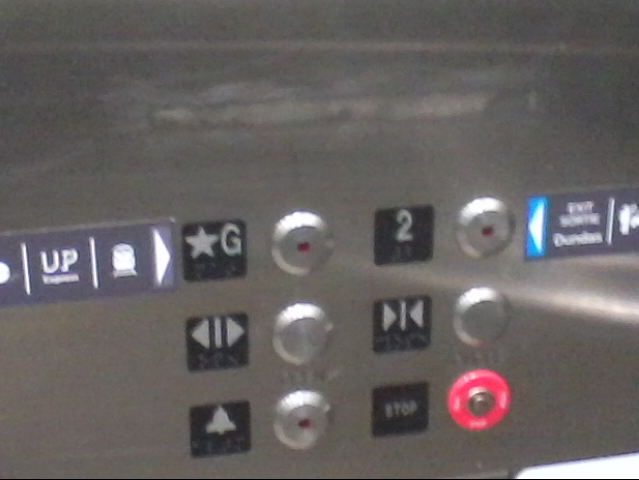 Both pics by me

I suspect GO have job applicants take an IQ test, and if you pass, you don't get the job.
V

TTC spokesperson confirms talks with Metrolinx, but no timeline confirmed

If you ever find yourself nervously wondering if you have enough money in your Presto account to pay for your TTC trip, your daily scare may soon be a thing of the past.
Toronto's transit agency is in talks with Metrolinx staff to change the card readers across the city's transit system so they can display Presto balances.
But it's still unclear when that change will happen.
The two sides are discussing logistics, "but no definitive timeframe has been identified for when this will be available," TTC spokesperson Heather Brown said in an email to CBC Toronto.
Presto card balances are already visible when riders tap on GO Transit and the UP Express.
"Presto staff can make it happen for TTC as well upon request," Metrolinx spokesperson Anne Marie Aikins said in an email. She added that including the fare-display feature has always been available, but it's at the discretion of each transit agency.
The TTC had previously cited privacy concerns among its reasons for not showing riders their balance.
However, TTC Chair Jaye Robinson said many riders have been asking for that ability as more and more people begin using the cards.
"As we continue to roll out Presto, we want to use the technology to our advantage," she told CBC. "That is part of the technology."
Robinson acknowledged the rollout of Presto on the TTC has not gone smoothly, with widespread reports of card problems as well as serious glitches including one that allowed some cards to shut down fare gates and card-loading machines.
Robinson suggested the changes could come into effect as early as this spring or summer.
Meanwhile, commuters who don't want to get caught with a low Presto card balance can always sign up for the auto-reload feature.
Click to expand...

Common sense has made a comeback at TTC management.
Last edited: May 27, 2019

Common sense has made a comeback at TTC management.
Click to expand...

I think it's a terrible idea and will just cause people to block entrance on buses and streetcars and the ones at the subway well a few people will stip to check their balance. I have said it many times I have never seen anyone stop and look at the ones on go trains as they pass to see what their balance is. If you haven't checked your balance before you board then it's your fault, besides getting to a bus and finding out you have a zero balance still doesn't help you anyway.

Common sense has made a comeback at TTC management.
Click to expand...

It would be nice if this was a setting you could manage on your Presto account, as to whether you want you balance displayed or not, and maybe even whether you want it read out or not (that should be an option for visually-impaired). I personally have no need to see my balance, as I have auto-load, and can also just check on my phone if I need to.
Fred S
You must log in or register to post here.
Share:
Facebook Twitter Reddit Pinterest Tumblr WhatsApp Email Share Link