The on-again off-again pedestrian link between Liberty Village and King st at Shaw is coming up for discussion at community counicll next Tuesday.
(Excerpts from letter)
The city is planning to build a pedestrian tunnel. For anyone who knows the location this is a poor choice. This part of Liberty Village is built on top of a parking garage and towers 2 stories above the tracks. A tunnel instead of a bridge will add a lot of needless climbing discouraging crossing.

I am doing an article on the crossing and am looking to interview someone who lives in the new community (townhouses) to the south or purchased in the new condo. Strachan avenue will be grade-separated and closed for construction making this walkway the only way to get out of Liberty Village/transit on foot/bike for many. Roger at green22@sympatico.ca


This item will be discussed at the Community Councilâ€™s meeting on:February 13, 2007, starting at 9:30 am
Committee Room 1, City Hall, 100 Queen Street West
www.toronto.ca/legdocs/mm...e03-ar.pdf

RECOMMENDATION
The City Planning Division recommends
that: The Chief Planner and Executive Director of the City Planning Division report to Toronto and East York Community Council in the 3rd quarter of 2007 on an
implementation plan and financial implications to implement a pedestrian link
from Shaw Street south of King to the Liberty Village Area.
FINANCIAL IMPACT
The Planning Division will report to Community Council on any financial
implications which may arise through this Staff report for Action â€“ Pedestrian Link, Intersection of King Street West and Shaw Street to Liberty Village 2 study process.
ISSUE BACKGROUND
At Toronto and East York's Community Council Meeting on September 13, 2006, a
Communication from Deputy Mayor Pantalone was received by Community Council
with a recommendation that the Chief Planner report to the next meeting of Community
Council on a pedestrian tunnel connection (from Shaw Street south of King Street West)
to the Liberty Village area, along with a work plan for achieving this pedestrian
connection.
COMMENTS
Members of the community have raised the issue of integrating the communities north
and south of the CN rail tracks that bisect Liberty Village from the community
surrounding King Street, between the King Street underpass and Strachan Avenue.
The area to the south of the CN rail tracks is now known as King Liberty. These former
industrial lands are being redeveloped into a mixed-use neighbourhood with streets,
parks, commercial, office and approximately 5,000 residential and live/work units. A
retail mall including a large grocery store has been built as part of the King Liberty
redevelopment.
The community to the north of the CN rail tracks utilizes the grocery store and the
adjacent commercial businesses that are located in the King Liberty neighbourhood. The
grocery store is physically located within close proximity to King Street and is within
view of King Street, however, due to the location and configuration of the rail tracks,
there is not a direct route to get to the grocery store.
In recognizing that a pedestrian crossing in this vicinity would be desirable, a
$100,000.00 Section 37 contribution was secured as part of the rezoning process for the
King Liberty neighbourhood, to cover a portion of the cost. In addition, the commercial
property owners in the King Liberty neighbourhood have expressed an interest in
contributing towards a pedestrian link.
Steering Group
The City Planning Division recognizes that a pedestrian crossing would be a significant
contribution towards city building in the area and that further study is needed. Staff
recommends that a steering group be set up to carry out the study. The steering group
would consist of staff from Parks, Technical Services, Transportation Services,
Community Planning, CN Rail, GO Transit and any other relevant parties as determined
through the process. Monthly meetings of the steering group will be held.

Staff report for Action â€“ Pedestrian Link, Intersection of King Street West and Shaw Street
to Liberty Village
Work Program
In order to analyze the opportunity to create a pedestrian link across the rail corridor, the
following work program is suggested:
- analyze the approaches to both sides of the rail corridor to determine the best
location for the link, how much space would be required and other improvements
to the sidewalk/road network connecting to the link
- analyze pedestrian desire lines and destinations on both sides of the rail corridor
- determine the physical criteria for the tunnel and logistics of construction under
the rail corridor
- review any implications for future expansion/changes to rail service in the area
- review any other pedestrian links being proposed in the vicinity eg. pedestrian
bridge to be built across the rail corridor between Spadina Avenue and Bathurst
Street and bridge at the foot of Abell Street on the north side of the corridor
Based on the analysis and technical review, the work group would then prepare:
- a preliminary proposal for the location, size and alignment of the tunnel
- a cost estimate
- possible sources of funds and financial implications for the City.
It is recommend that the steering group provide the results of this technical review in a
report to Community Council in the third quarter of 2007.
CONTACT
Heather Inglis Baron, Planner
Tel. No. 416-392-0760
Fax No. 416-392-1330
E-mail: hinglis@toronto.ca
SIGNATURE
_______________________________
Gary Wright, Director
Community Planning Toronto and East York District
(p:\ 2006\Cluster B\pln\teycc33741201099.doc) - pg
U

A tunnel is definitely a bad choice because of the safety implications. I'd imagine it's also much more difficult to keep clean, graffiti-free, etc.
G

I talked with the planner a year ago and she said that CN did not want a bridge as it preferred to keep it's right-of-way clear. Of course if the city fought it in court experience has shown that they would win. The problem is that CN knows that the city is not willing to fight it over pedestrian access the way it would for a new roadway.
The only reason that the city is even considering a crossing for pedestrians is due to repeated requests from people on both sides of the tracks that want to get to transit & shopping on the north or to strip mall & Dominion on the south. In contrast rail crossing projects in the area for cars such as the Dufferin jog elimination, Bathurst bridge widening, Strachan Avenue grade separation and Front Street Extension are the projects pushed by our elected officials.

Let's see if condo dwellers want to carry groceries travel 4 flights of stairs to use the tunnel. These are the kind of decisions that push those that can afford to to drive. Rather than endless delays raising money for an inconvenient tunnel they could build a level pedestrian only crossing with bells and crossing arms at Duro street near the Dominion in a couple of months. Cost about $170,000 or about the cost of a traffic signal.
S

Green22, that would conflict with Blue22.

Blue22, whether it is alive or not, is interfering with a lot of plans for the area. What ever happened to Railpath?

Anyway, makes too much damned sense. The Wallace Street footbridge over the same ROW is there to stay, so there's certainly precendent.
A

It may depend on the kind of tunnel--if it's ample enough in scale, has some design thought in it, and is in constant enough use, that may alleviate some of the safety concerns...
U

Adma, this is Toronto, not Europe.
T

Yah, in europe it would look good but you would get mugged anyway.

Not sure if this is the right thread since it has not been active since 2007, but here is an exciting update from the City's project website.

There is a public consultation this Thursday on the detailed design, with construction anticipated to start in late 2017.

King-Liberty Pedestrian / Cycling Bridge
The City of Toronto is moving forward with detailed design of a new pedestrian / cycling
bridge over the Metrolinx Union Station Rail Corridor, from Douro Street to the
western leg of Western Battery Road.

This new bridge will provide a convenient and more direct route from Liberty Village to
King Street West between Atlantic Avenue and Strachan Avenue.

The location and general design of the bridge was endorsed by City Council in December 2011.

We invite your input on design options for the look of the bridge and related landscaping.

Public Drop-in Event
Attend a public drop-in event to view drawings and information materials, discuss with the project team, and provide your feedback in person:

Note that this is not related to the "King Highline" link that was pitched by condo developers. 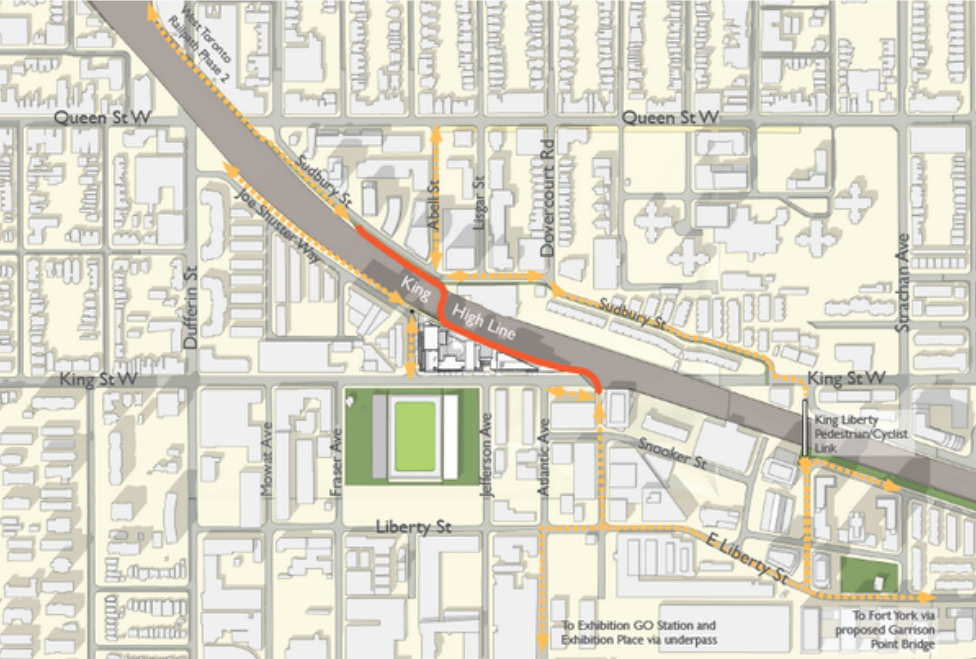 And from that city site, re: the public meeting:

At this stage we are seeking public input on options for:
Funding for implementation has been secured and we are working to finalize the design with the aim of starting construction in late 2017.
T 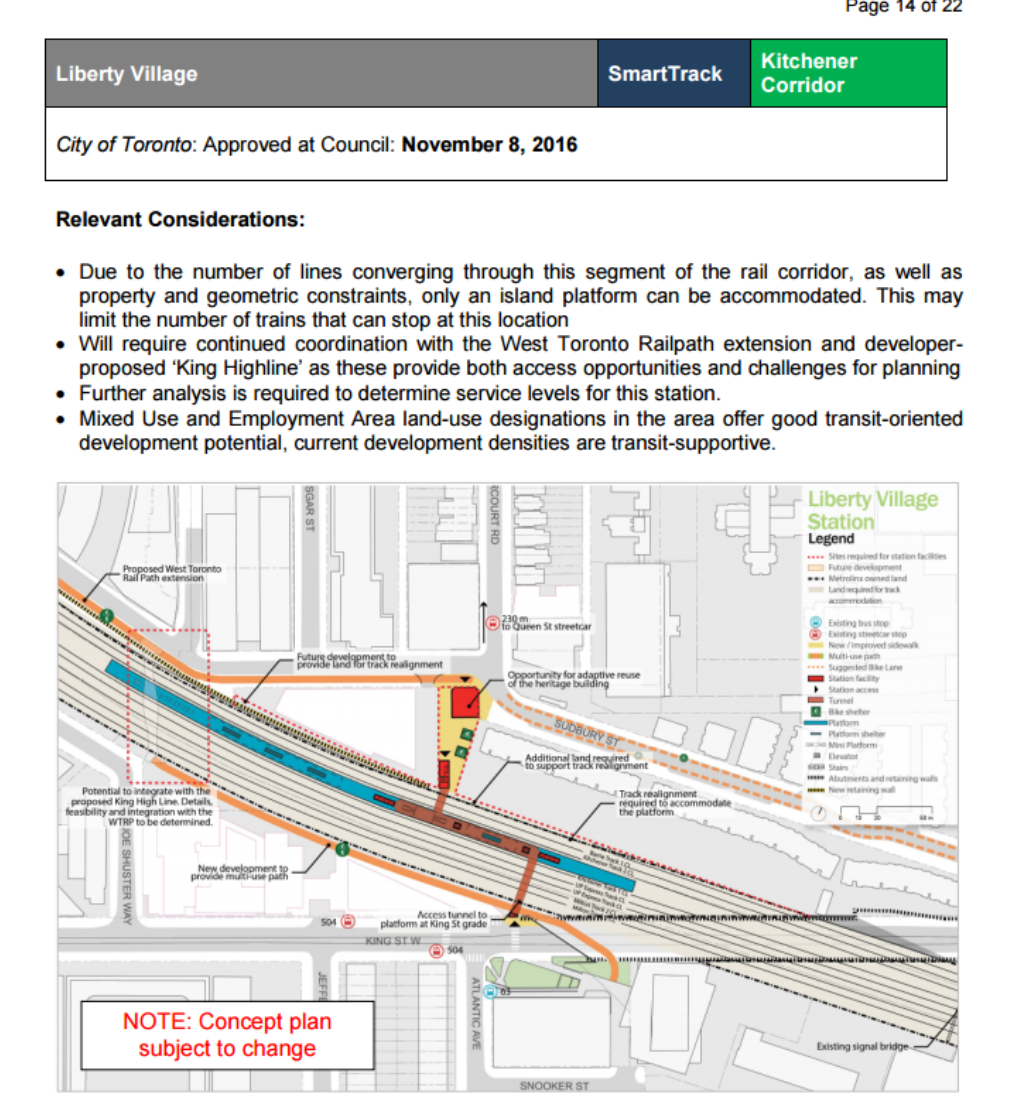 No, this is a pedestrian and cycle bridge to be constructed at a different location than the one in that image you posted.
T

ADRM said:
No, this is a pedestrian and cycle bridge to be constructed at a different location than the one in that image you posted.
Click to expand...


green22 said:
The city is planning to build a pedestrian tunnel. For anyone who knows the location this is a poor choice. This part of Liberty Village is built on top of a parking garage and towers 2 stories above the tracks. A tunnel instead of a bridge will add a lot of needless climbing discouraging crossing.
Click to expand...

Yep, that was posted in 2007, though. This will be a bridge and it is funded as such.
T

ADRM said:
Yep, that was posted in 2007, though. This will be a bridge and it is funded as such.
Click to expand...