TheTigerMaster said:
This thread has been quiet lately. Our friends at Kit Kat have also been quiet
Click to expand...

Having a hit show at the Alex helps.
N

I wonder how much of that 11% drop of AM peak pedestrian traffic were people who previously were waiting for a streetcar or watching a packed streetcar leave them behind and said "f**k it, I'm walking".
P

Wow, that jumbled mess in CC’s photo is so Toronto.
S

^There's twisted irony in that the vid cameras can't be used in court for red-lighting or other traffic offences. It has to be a prescribed still camera:

[...]
2. (1) For the purposes of Part XIV.2 of the Act, a red light camera system is the combination of one or more cameras and other equipment of a type described in subsection (1.1) that is installed at an intersection controlled by a traffic control signal such that,

(a) it is capable of photographing all or part of the intersection; and

(b) it takes a first photograph of a vehicle when the vehicle approaches the intersection at or above a detectable speed when a red indication is shown and it then takes one or more further photographs in succession. O. Reg. 569/00, s. 2; O. Reg. 245/07, s. 2 (1).

(1.1) A red light camera system may be either of the following systems:

So vehicles are immune from optical surveillance, but pedestrians aren't.

steveintoronto said:
^There's twisted irony in that the vid cameras can't be used in court for red-lighting or other traffic offences. It has to be a prescribed still camera:

So vehicles are immune from optical surveillance, but pedestrians aren't.
Click to expand...

Aren't "moving pictures" defined as "a sequence of consecutive photographic images in such rapid succession as to give the illusion of movement"? Sounds like someone trying to create a "legal loophole".
[SIGPIC][/SIGPIC]W. K. Lis

steveintoronto said:
^There's twisted irony in that the vid cameras can't be used in court for red-lighting or other traffic offences. It has to be a prescribed still camera:

So vehicles are immune from optical surveillance, but pedestrians aren't.
Click to expand...

But that doesn't preclude the use of these cameras for by-law violations which is basically what they may be used for (i.e. vehicles going straight on a green although they should be turning right). Or maybe they're used to monitor for compliance so they can send an officer out to improve things.
S

W. K. Lis said:
Aren't "moving pictures" defined as "a sequence of consecutive photographic images in such rapid succession as to give the illusion of movement"? Sounds like someone trying to create a "legal loophole".
Click to expand...

The Act is specific in what it requires.
[...]
(1.1) A red light camera system may be either of the following systems:

BMO said:
But that doesn't preclude the use of these cameras for by-law violations which is basically what they may be used for (i.e. vehicles going straight on a green although they should be turning right). Or maybe they're used to monitor for compliance so they can send an officer out to improve things.
Click to expand...

The Hwy Traffic Act isn't "bylaw"...it's provincial. And yes, the video cameras can be used to "monitor" so that legally enabled persons may attend to address situations.

Video "evidence" is contentious for the purpose of criminal court cases:

Canadian courts have struggled with defining an appropriate test for the authentication of electronic evidence, including video recordings. In an earlier commentary I addressed these arguments in context of the Ontario Superior Court of Justice case of R v Andalib-Goortani which addressed the admissibility of an image found on the internet on an anonymous website.

R v Bulldog is a very recent decision from the Alberta Court of Appeal which steps into this debate and provides some needed clarify of the applicable principles. The Court addressed how trial courts should address the authenticity a different from of electronic evidence – a video recording of an assault. [...]
Click to expand...

Very few driving offences are under the Criminal Code...albeit maybe more should be...

In case anyone is wondering what King is like at 2:10 am, here's some pics from this morning at Spadina & King: 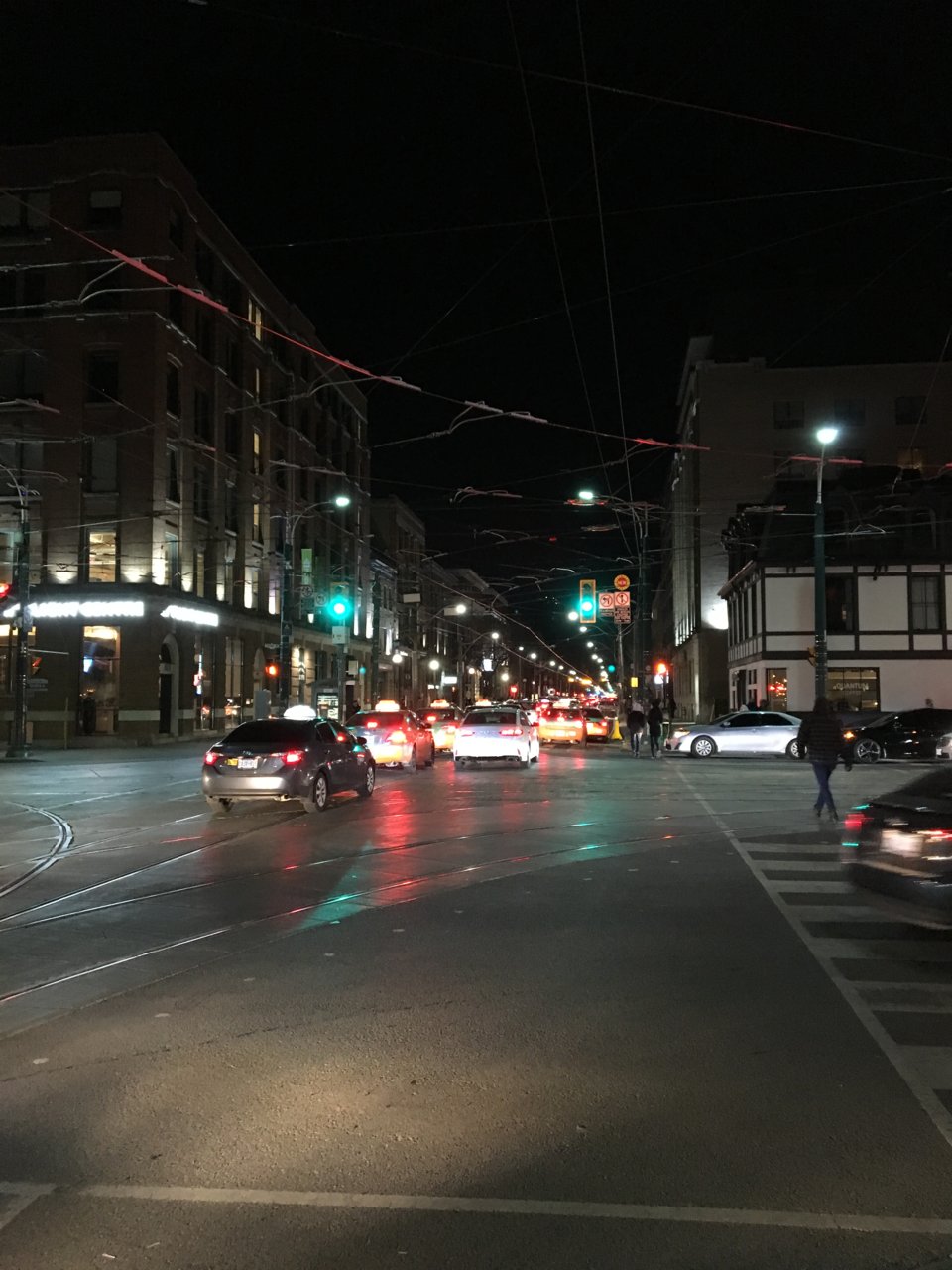 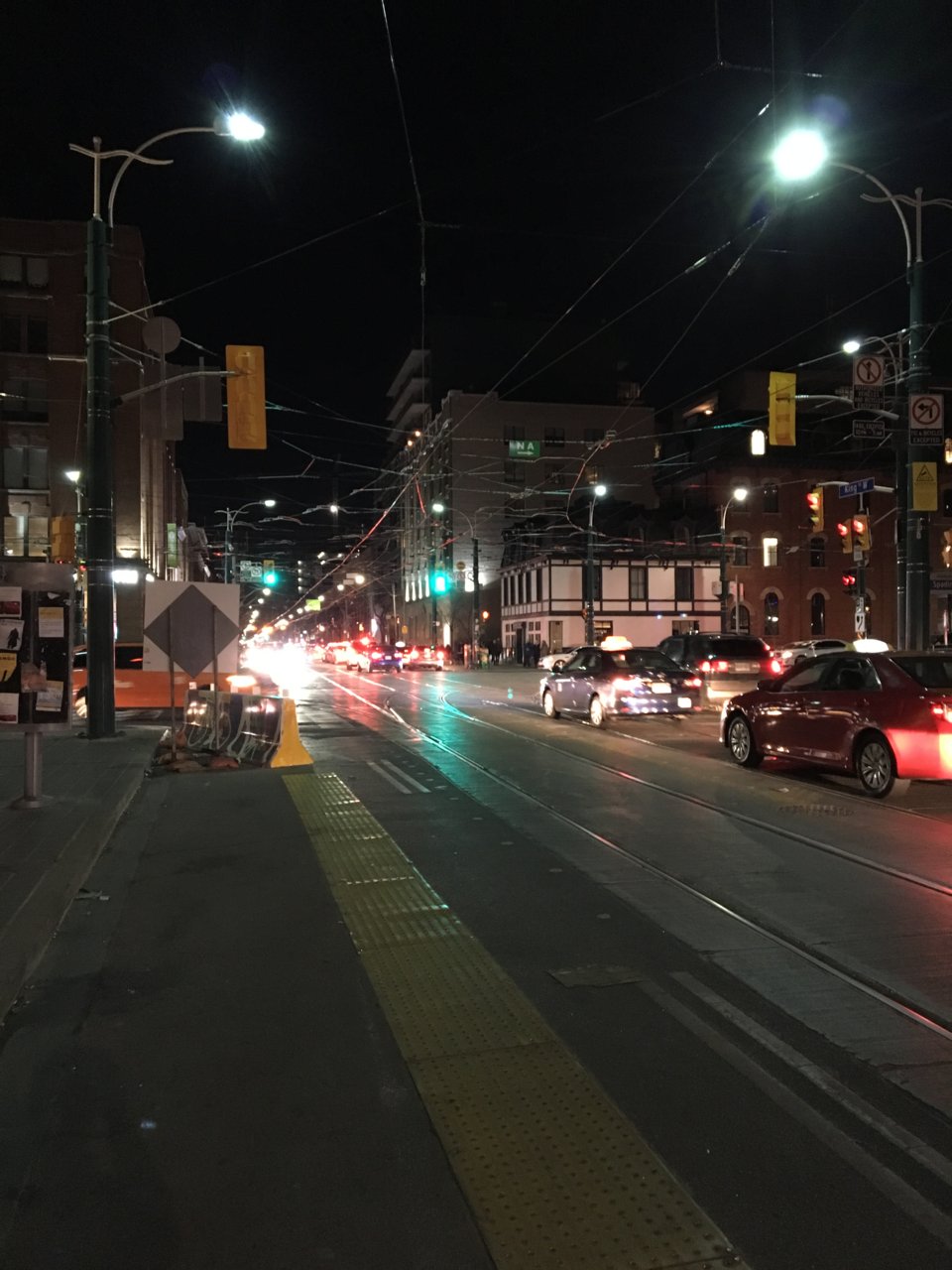 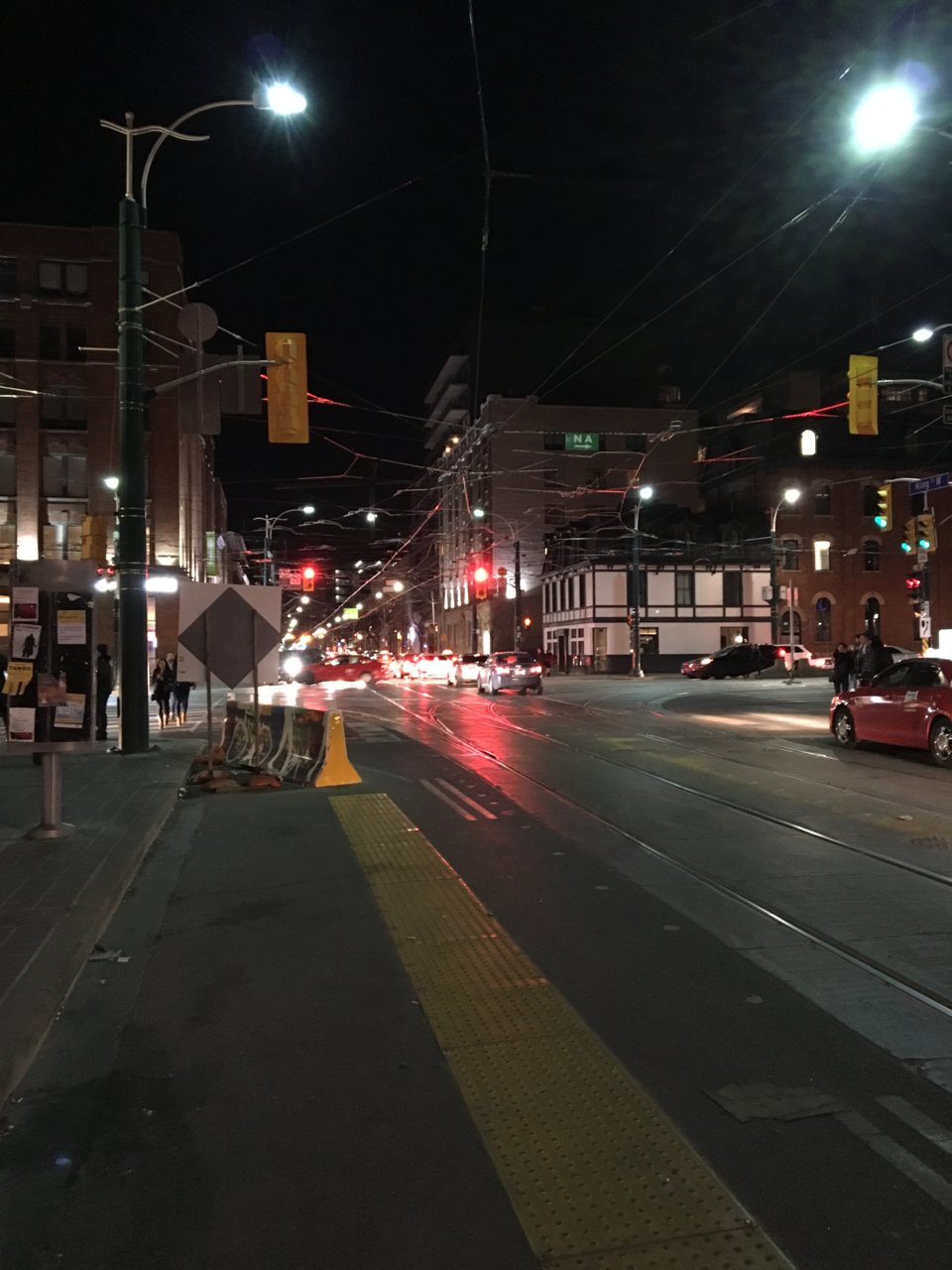 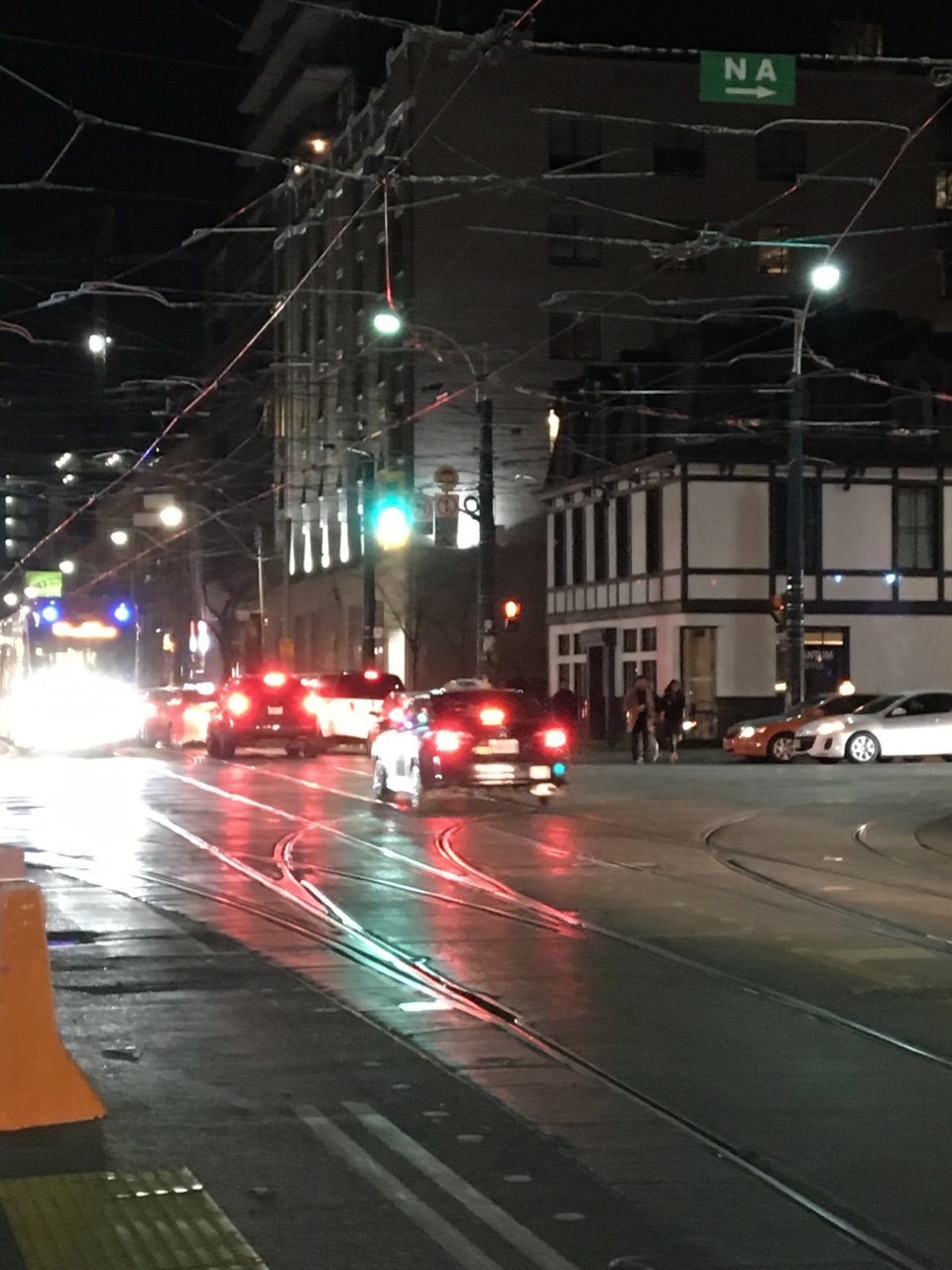 yrt+viva=1system said:
In case anyone is wondering what King is like at 2:10 am, here's some pics from this morning at Spadina & King
Click to expand...

Thanks for posting this. That makes my blood boil just looking at those pictures.

I witness that unfortunately this is an almost daily occurrence (weekdays or weekends, any hour of the day) and was not caused by the pilot. However, the pilot seems to have made the lane blocking worse due to the placement of the farside stop westbound.

That intersection a total disaster and makes me incredibly angry on a regular basis.

The problem is nobody seems to care to do anything about this. I wrote Joe Cressy and the King Street Pilot team. They put all the blame on the drivers; they certainly do harbor a lot of the blame but the farside stop has made a bad situation even worse. I wrote to suggest moving the farside stop back to the nearside. Here is their response to me.


Hello Peter,
The westbound stop at King/Spadina was moved to farside of the intersection so that a passenger waiting area can be extended from the sidewalk onto the curb lane. This arrangement makes for a safer boarding operation on King Street West. Commuters do not need to cross a traffic lane to board a streetcar. Additionally, moving the stop freed up traffic flow for westbound right turns as vehicles are not held back by a stopped streetcar.
An offset distance from Spadina Avenue has been set to accommodate an equivalent of three car spaces to ensure that northbound left turns can move onto King during its signal phase even when a streetcar is stopped. There is, of course, a limit to the offset because consideration was also given to the stop's proximity to the crosswalk and access to driveways north side of King Street West. It is the driver's responsibility to look ahead before turning to make sure they are not blocking the intersection.
Thank you.
Regards,
Allan

...
A review authored by Ryerson University professor Murtaza Haider and released Monday by the Ontario Restaurant Hotel & Motel Association (ORHMA) contends the project’s effect on streetcar travel times has been minimal, and the ridership increase observed on the route may have been achievable without reconfiguring King.
...
Click to expand...

Frankly it's not surprising. There's been a very real hype factor on the results *so far* of the King Project. I too have not noticed a discernible travel time difference. Don't get me wrong, this project has to not only happen, it has to happen on a much greater scale than what it is now, and that takes...tada...*sufficient funding*...

By dismissing the concerns of some squeaky wheel restaurants, and the usual suspects on Council and their minions, this project has been playing into the hands of yesterday.

Haider is wrong on a number of counts, won't go into that right now, the biggest failure of the Project has been public relations, and how the City has botched this in many respects. What's down there now also looks like shit, although in all fairness, much of the city does this time of year.

The City apportioned $1.5M for this, that's a freakin' pittance. Is it any wonder it's getting the blowback that it is? And where's the discussion on affording a traffic signal, TTC dispatch rate and electronically monitored traffic compliance control system for the street....*Project or Not*?

I hope this is the slap in the face the City needs to wake-up on this...and do it right.

Gotta be honest, the King Street Pilot isn't terrible. Things have improved, but I do agree that the improvements we've seen aren't terribly impressive. A transit line that was at-capacity had a growth in ridership when more vehicles were added to the line. Doesn't seem like a surprise. Also improved on-time arrival in % is also misleading. 77% before the pilot vs 85% afterwards is all relative to how many vehicles operate on the line. if you have, say 62 vehicles (I'm just guessing I don't know how many vehicles are running) 85% reliability means 53 vehicles arrive on time vs. 48 (@77%) . They also often fail to mention slower travel times in the AM Peak and overstate the minor average travel time improvements along the corridor. 2-3 minutes is an average along the entire corridor and merely means you can add maybe one or two extra vehicles to the route. Sure it's better than before the pilot, but things could certainly be better, the pilot hasn't really done anything extra-ordinary.
S

^ Excellent response, I was a bit worried that I came off sounding negative, which to a degree I am. Not on the concept, it's one of the only affordable, here and now civilized solutions to downtown transit. I'm just miffed that so many Torontonians think the Emperor With No Cars travels King Street. What's been achieved so far is pathetic in many respects. The lack of Flexities has exacerbated the result so far, but that's becoming too convenient an excuse.

We still don't have traffic light priority for streetcars! (Before anyone claims that we do on that stretch, it's not priority in the world-class sense, like many other cities have).