Goldie said:
Here's a 1920 aerial of the area that interests you:
Click to expand...

Very interesting, albeit now I'm really salivating, as beside *evidently* the second floor not yet added, (edit: In fact it appears it is upon intense study) there appears to be some other structure previously not been discussed, at least with me. Shadows due to the angle of light can cast misleading detail. I'm forwarding this to the lead architect who knows the building concerned (and those adjacent) intimately. It *appears* that some of the claim for the amount of 'glass' on the building may be out of proportion. It might be that the 'panels' engineered into the building facade were just modular for bricks as well as windows, but that observation is subjective until I can get greater detail.

adma said:
Actually, that photo's no earlier than 1931 (reason: the Horse Palace is already extant)
Click to expand...

Which may explain the 'lack of glass'. Excellent spotting! I find the number of apparently parked vehicles intriguing.

Late Addendum:
Newest version of Google Earth is a dimension better than the last one. Even if that pic is 1930+, I'm able to compare changes in structure that I was hitherto unaware of, which raise interesting questions and perhaps answers in themselves.

There have been lateral additions to the building in question that can be discerned by difference of the 2018 Google Earth renditions to the "1920" pic, whether it's a decade or more later or not.

I will take the index for that pic to TPL to give them an idea of what is useful to us. They've been incredibly helpful so far, but might have come across pics that they assume are not what we want, but in fact are invaluable.
Last edited: Jul 18, 2018 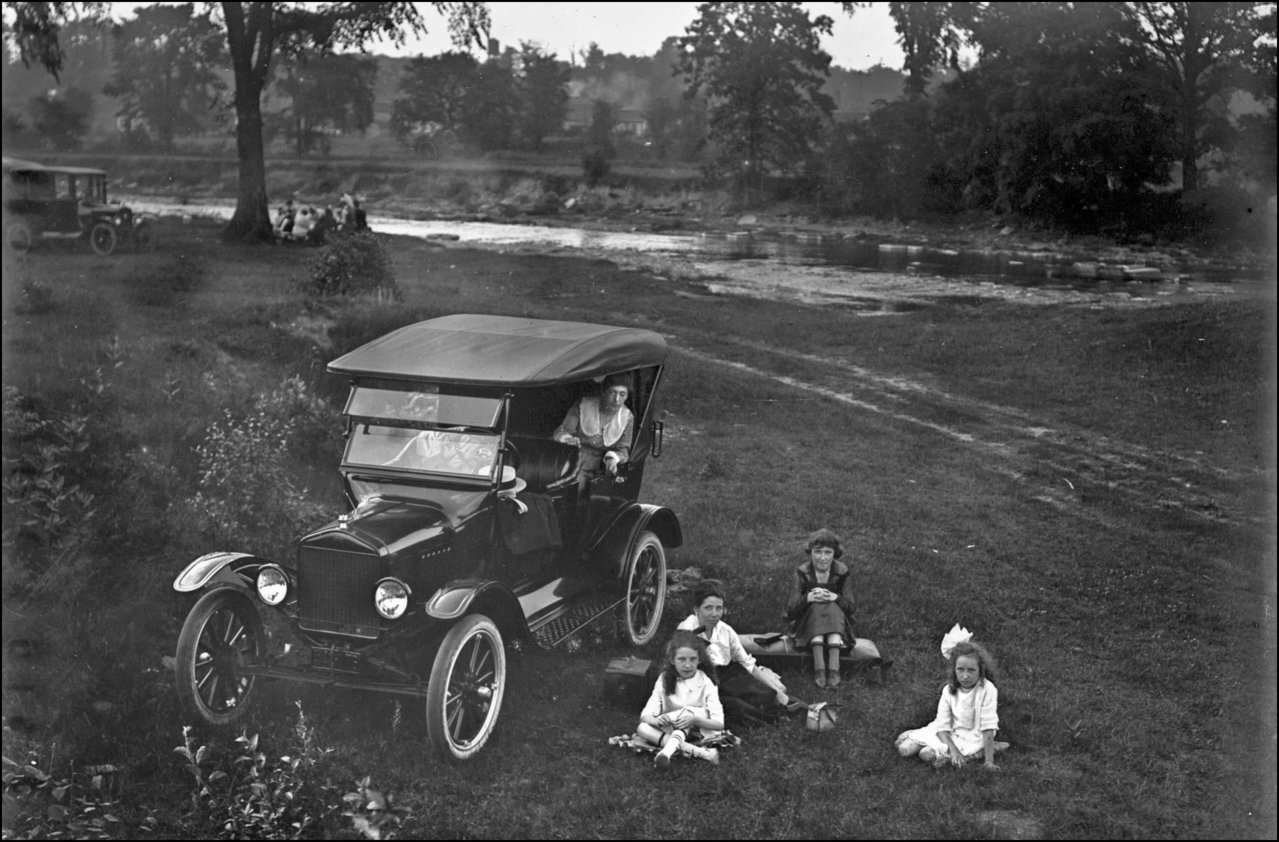 steveintoronto said:
Anything on lower Fraser you could post would be of immense value,
Click to expand...

Here's another photo of the building that interests you.
This is cropped from a low-res image on the Ontario Archives web site. 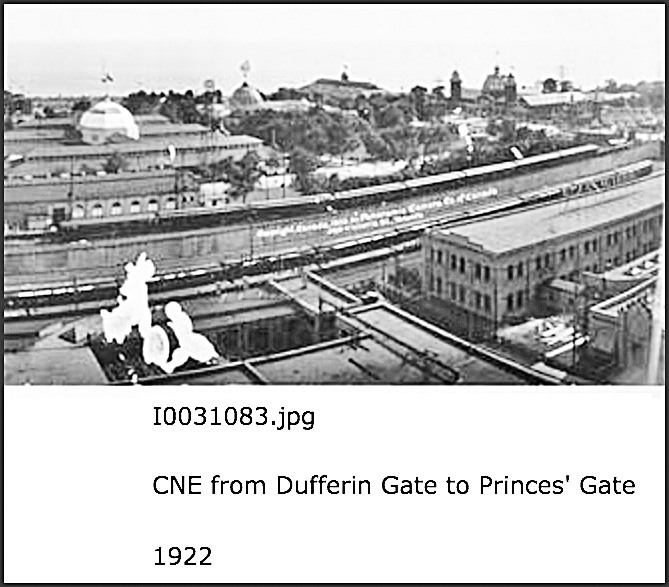 In 1862 one could enjoy a steamship cruise from Toronto to Montreal.
"Leaving from the foot of Yonge St. at 2 PM every afternoon."

Goldie said:
Here's another photo of the building that interests you.
This is cropped from a low-res image on the Ontario Archives.
Click to expand...

Amazing. The 'Old Bread Factory' (2 Fraser) isn't the building in question. But you've caught the roof of the one that is. I have to be cagey about this in open forums, for a number of reasons. I'll try to PM you later.

But that pic is still very valuable! That's an angle we've never seen before, the steam line over the roof and to the 'residence' to the south is intriguing, but as @adma replied yesterday, the date is inevitably incorrect for "1922". Records we have indicate that the second floor wasn't added until 1923 by a different architect than the original...but again, a lot of what is presumed to be the case is suspect.

That pic must have been taken from a balloon or a telescopic lens of the time from the taller buildings to the north (Massey, Barrymore et al).

From the angle, I'd guess balloon. (edit: It could also be atop a pole, the shaft of which might be visible in the far right of the pic. Also the 'Rorschach sign' might be backwards in the earlier pic! And thus incomprehensible)

I'm going to be forwarding that and stare at it intently before doing so. Again, many thanks, and I'll PM more details to you.

Edit to Add: lol! And there's the Rorschach sign on top of number 2 again! Only a fraction of that structure is left, it was glorious in its original form but it has been re-purposed well in its present iteration. The building had already been eviscerated with "modernization" over the decades. Fortunately the original facade has been saved on the Fraser side.

Something much more genuine is in the works across the street from it. The challenge is to find record of what it was in its original form. The fond at the Archives is full of the architect's drawings, blueprints and notes on most of his other buildings in Toronto, that building conspicuously absent. Even one a few doors up, the original foundry is in the Archives in exquisite detail and a some twenty typed pages of construction notes. It's very odd....

So even if you haven't hit the jackpot, you're hitting damn close. Pics of the original are out there. Just a case of finding them. I should be back at the TPL again once the great weather cools off to pick-up where I and staff have left off.

Heritage Toronto have yet to be approached. The local council sent a request for designation, (found the record of it) and must have had some supporting evidence for the request. I'd like to know what it is.
Last edited: Jul 20, 2018
A

Goldie said:
Here's another photo of the building that interests you.
This is cropped from a low-res image on the Ontario Archives.
View attachment 150669
Click to expand...

Interestingly prominent there with the white dome is the "General Exhibits" building--maybe the most curiously obscure of the Gouinlock-era Ex pavilions; it was demolished circa 1960... 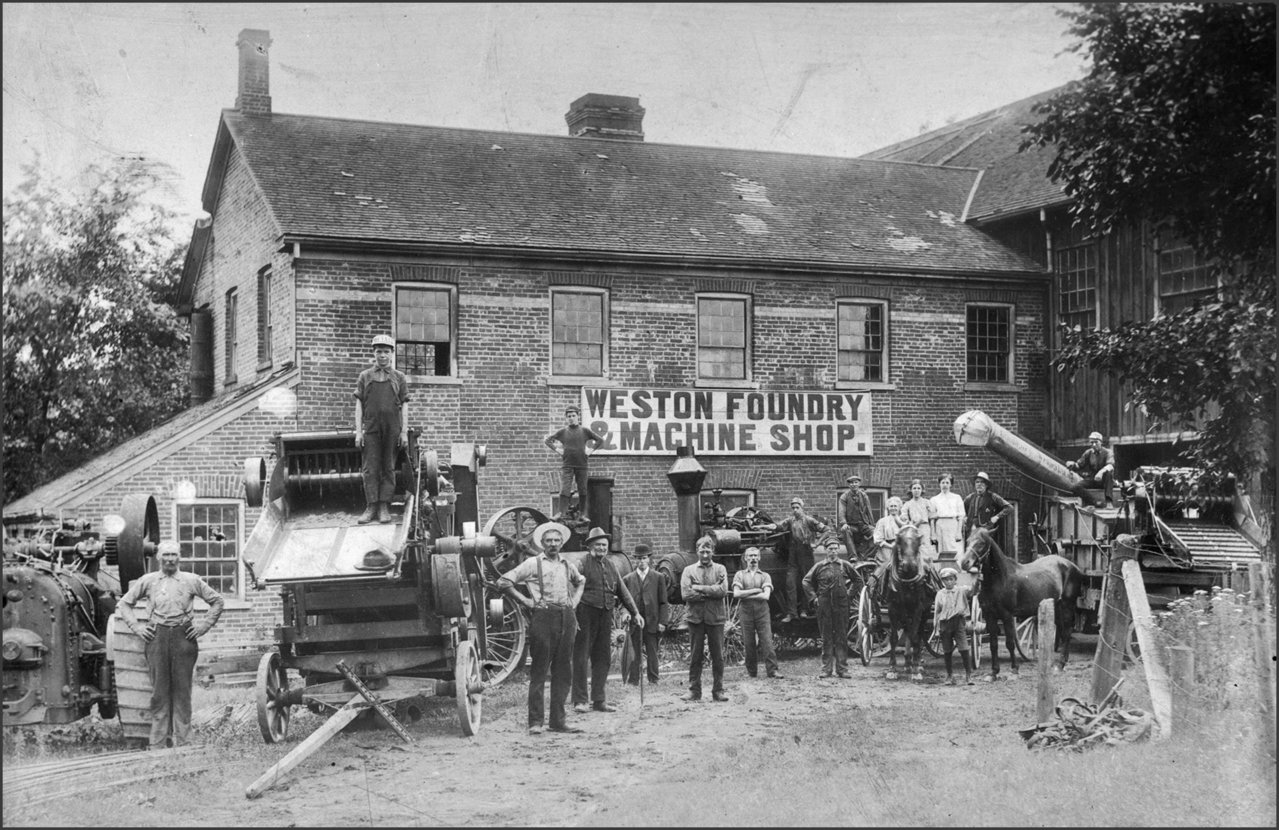 I was so intrigued with this pic, I had to find out more.

There's not a huge amount to be found relevant to the above in the links in the following, but it's well worth accessing them.

The Moffat Stove Company, which moved to Denison Ave. west of Jane St. in 1893, is credited with inventing the first electric ranges for the domestic market. And although the Moffat family sold the business in 1953, stoves and refrigerators continued to be built at the Weston plant until the early 1970s.

Addendum: Following links above, as they always do, I was led to read up on other Weston industries, all incredibly fascinating, but this is supreme:

Introduction page of a digitally functioning Moffat catalogue: (Click on link beneath to 'flick' through the catalogue) 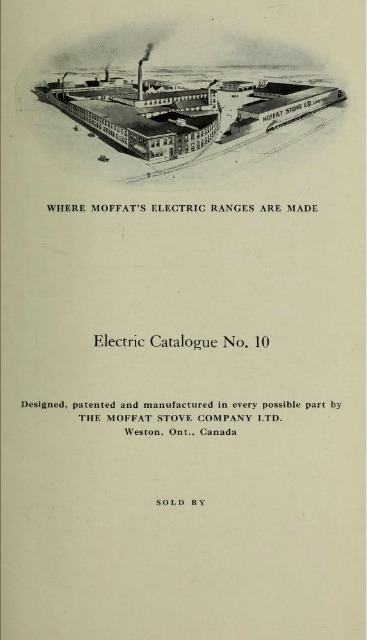 Wow! Thanks for posting this Goldie.

I grew up in this part of East York in the 1960s and '70s. I lived in a house built in 1915 in the oldest section of Westwood Ave. between Broadview and Logan. I've searched online for early photographs of the street but have so far been thwarted. There are available images of ancient Broadview north of Danforth (formerly Don Mills Rd) and Cosburn (formerly Bee St), but I've yet to encounter anything for Westwood or the nearby Mortimer or Floyd. Apart from the Goad Atlas maps and a few aerial photos starting in the '40s, the area seems underrepresented even by the various government archives. 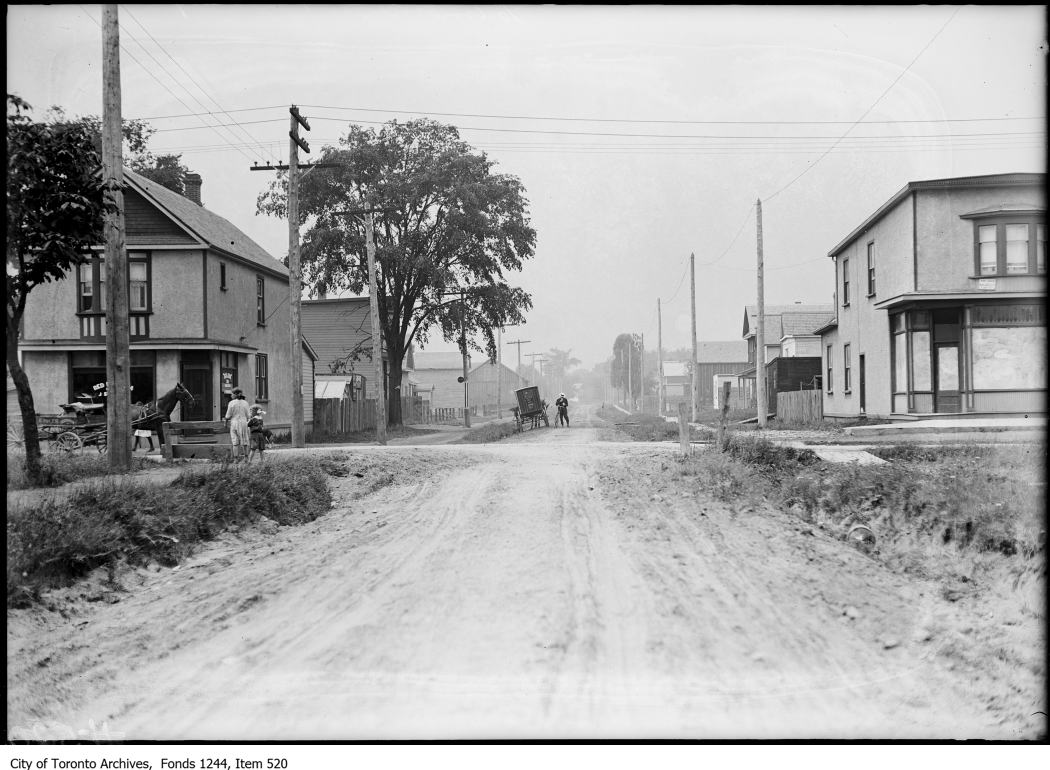 
Not to become Then & Now but …. I am not sure this 2017 Streetview is pointing in right direction! 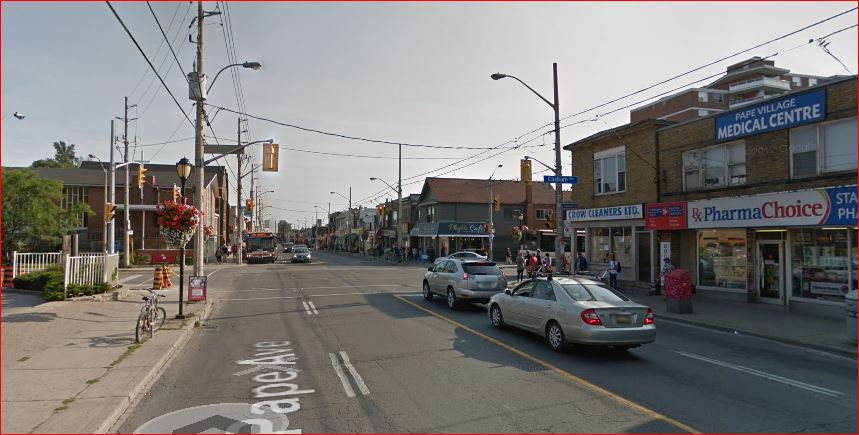 Sorry, your street view is looking the wrong way.
Those two corner buildings are still there.
Here's my 2009 version: 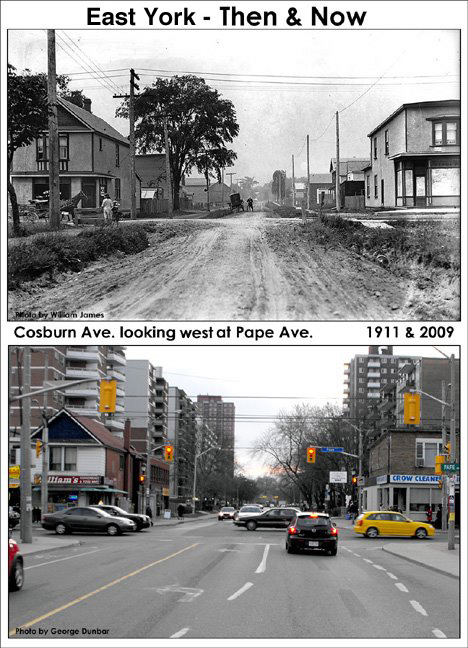 There’s something really moving about these old photos.

pman said:
There’s something really moving about these old photos.
Click to expand...

Yes, I particularly like that image because I grew up nearby (Donlands Ave) in the 1940s era.
[SIGPIC][/SIGPIC]Goldie 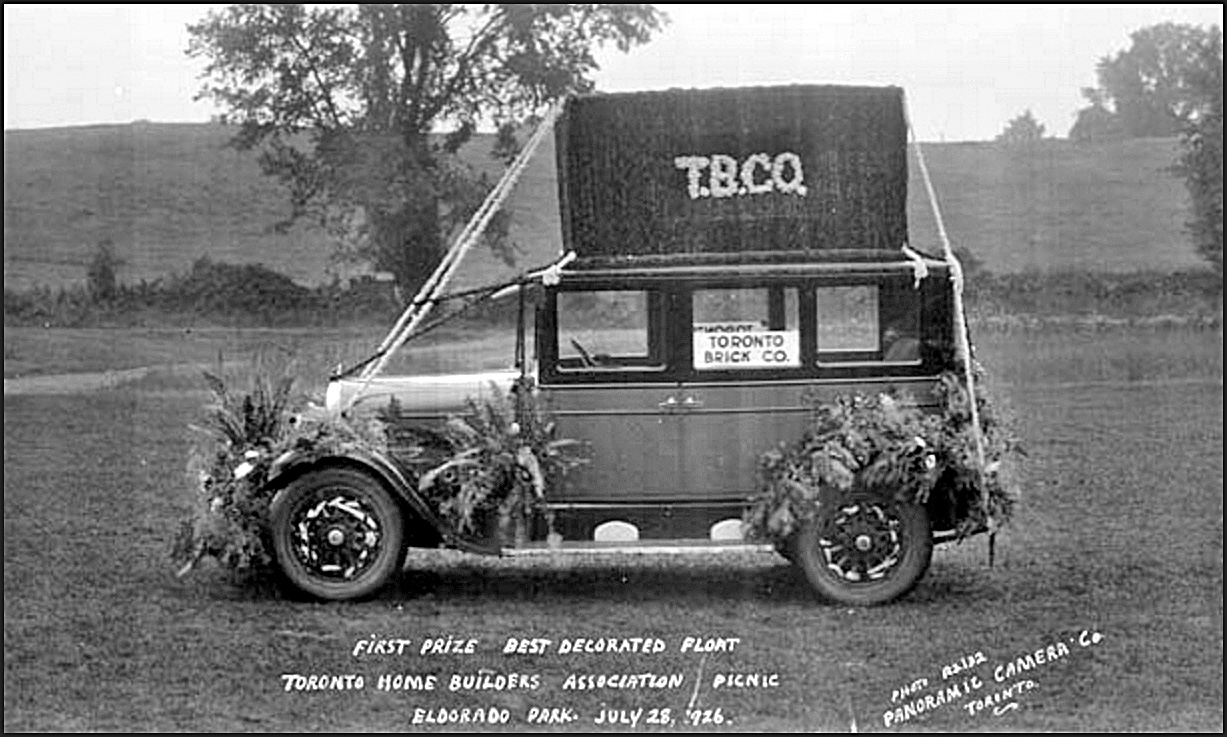