This article confirms the site has been sold to a developer.

Marty Millionaire has cashed out.

The eclectic furniture store at the corner of Parliament St. and Queen St. E., destination of empty nesters and college grads furnishing their first pads, and the go-to spot for quality used furniture for countless TV and film productions, has sold building and contents and packed it in after 36 years.

The windows are shielded by screens and shutters and the sign posted on the door says â€œMarty Millionaire is now closed. Inventory is being moved under new ownership. We thank all our customers for their business and wish you all the best in the future.â€

The above is followed by a telephone number for all future rental/sales inquiries.

Co-owner brothers Norm and Marty Nefsky are second-generation furniture merchants. Their father sold the late Ed Mirvish the 400 chairs in his restaurant Edâ€™s Warehouse, which is synchronistic since Marty Millionaire is also from an indelibly flamboyant tradition â€” the Honest Edâ€™s of furniture. It started in 1968 at Queen St. W. and Spadina Ave., moving to the present location in 1978.

Marty is on a plane, bound for two weeks in Florida. Norm is still on the premises wrapping things up.

â€œSit down,â€ he instructs. There is no shortage of chairs. He canâ€™t even begin to guess the inventory over four floors and 40,000 square feet, including the basement.

Is he taking any mementos? â€œThereâ€™s nothing we want,â€ he says.

Norm wonâ€™t divulge how much the store sold for, except to say â€œenough.â€ There were two buyers, he says; he sold the building to an undisclosed developer; office-furniture vendors Fraser Huntly bought the stock.

Deciding to sell was a combination of timing and money.

â€œTaxes and insurance doubled over the last 10 years and fire insurance was more difficult,â€ he explains. â€œThe roof needs to be replaced and we have a 60-year-old elevator. These people came in one day and offered money (for the building). The process started in July but they had to do an environmental assessment.

â€œAfter the assessment passed, I said to (the developer), â€˜Here are the keys, give me my money.â€™ He said â€˜No, we want it empty.â€™ So then we went to plan B. Maybe weâ€™ll move (Marty Millionaire) to another location. But every lease in town was asking four times too much for junk â€” itâ€™s not First Canadian Place.

â€œOn Nov. 1, (the developer) said he wants the place. So I told the staff to sell it all off. We officially closed on Dec. 18, when the (Fraser Huntly) guy paid for the merchandise.â€

Norm is vague about his future plans, but retirement isnâ€™t one of them.

Thanks for posting. End of an era. I always thought it would be awesome location to shoot a horror movie.. You know teens locked in the furniture shop for the weekend
S

It looks like Free the Children is moving in here with their Global Learning Centre.

I wonder if they will be leasing the entire building or just the top floor.

I came across a rendering as part of a brochure advertising this space. It would be great to see retail here. 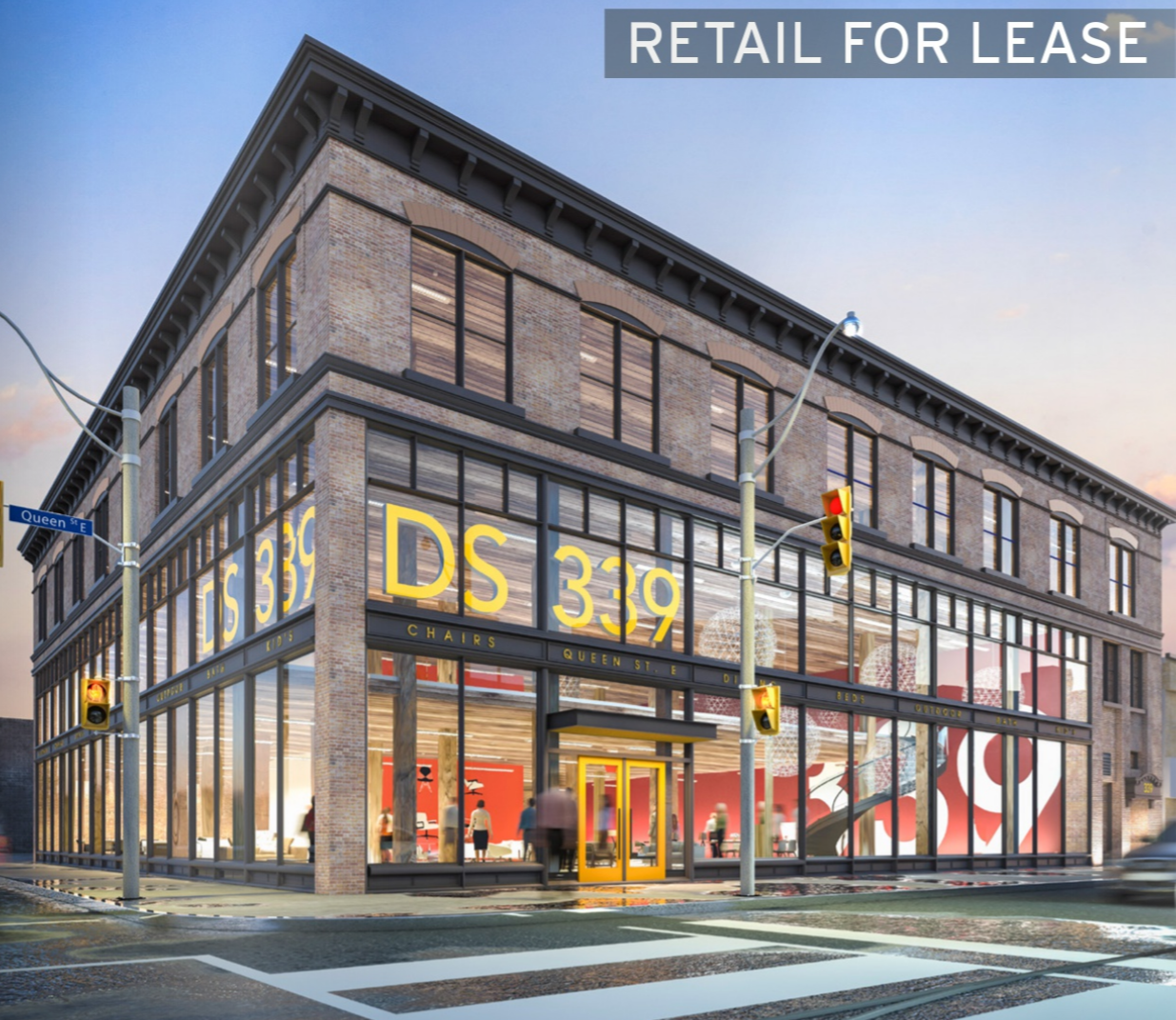 This is part of the Marty building but I am not sure which, the former kindergarten at the back??

This report will be made available prior to the Toronto Preservation Board meeting of November 5, 2015.

ooh I got on the 501 at Parliament on Tuesday and was wondering if this would get developed, it looks like it has a lot of potential if it were to be restored.

Looks nice enough. But honestly I'd rather it stay a crazy colour.

Given the classy looks of the render, I would think they want to avoid krazy kullerz.

KLEERLY LOLZ.
I didn't expect them to keep it a fun colour. The renders look nice. I'm glad they are restoring it and not demolishing it. The building has more personality with the turquoise though.
L

I dislike the current colour. I think this will 'clean up' the corner and bring some history back to life here. This area needs a lot of TLC.

I think that particular "turquoise" has been dipped in scum, so I won't be unhappy to see the building leached of its leery character.

I agree. But it's not as if we're in the tropics, where a riot of colours prevail. We definitely have a nordic bent to our city's decor - hence the preponderance of dull greys and icy hues. We sure could do with more red brick, for one thing - if only for its comparative warmth.

Who says that colour only belongs in the tropics? Have you ever been to Newfoundland or Iceland or Holland or Scandinavia? There is great use of colour in all those places. I think colour is needed more in cold, northern places to make up for the sunshine and light that we lack. We don't need grey buildings to match our grey winter skies. We need COLOUR and lots of it!

I'm not. I'm admittedly generalizing. Don't get me wrong - I love colour. I make a good living using colour extensively. But I'm just saying that, for whatever reasons, Toronto has historically not been into vivid colour - instead, we tend to favour monotones, earth tones and, more recently, a whole lot of blue and green.
You must log in or register to post here.
Share:
Facebook Twitter Reddit Pinterest Tumblr WhatsApp Email Share Link