Admiral Beez said:
Is Siemens-Alstom going to take as long as Bombardier to design and deliver vehicles for the Eglinton Crosstown?
Click to expand...

One already exists (Alstom Citadis Spirit - see Ottawa Confederation LRT) but will never see service on the Crosstown since Metrolinx will have all it's ordered cars from Bombardier (sans welding issue) by the time they actually need them.


Admiral Beez said:
Streetcars are Siemens-Alstom's wheelhouse, judging by their top position in the global market. There must be a reason that the resurgence in LRTs and streetcars in the USA has led to no business for the Flexity program.And I bet Edmonton's procurement team is mighty worried that they just bought a lemon. They were in 2016.....
Click to expand...

Please stop calling the product a lemon when other manufacturers products would have the same teething issues as the Flexity Outlook which is in and of itself would be a result of having to conform with the requirements of the TTC streetcar network. As for Edmonton, they aren't worried about their selected Flexity Freedom product since it has proven itself to be a superior product in Waterloo despite the production issues. (I've bolded the model names since apparently people can't tell the difference)


Admiral Beez said:
Will Bombardier agree to cover the cost to ship it back to Montreal for re-welding, like the TTC's vehicles?
Click to expand...


Admiral Beez said:
Really, so those models were built in Mexico and then shipped to Europe and Oz for final assembly? Did their cabs line up correctly with the chassis, or did they need to crowbar things to fit? And how were the welds? If Toronto's models are simply local versions of existing vehicles, suggesting Bombardier should have experience in this model, why did we have these problems?
Click to expand...

All of those ones were manufactured entirely in Vienna, Austria (using the existing European supply chain which has supplied that plant for decades) and shipped assembled to their destination. We could have had them shipped from Vienna already assembled but Ontario requires that all transit procurement meet a 25% minimum Canadian Content requirement which Siemens indicated its opposition to during the RFP for the 204 car order that Bombardier won for the Flexity Outlook.


Admiral Beez said:
I'm not buying it. Finish the current procurement with BBR, and ask Siemens-Alstom and others to bid on the Flexity's replacement.
Click to expand...

Sure let's advocate for wasting $2 billion + procuring 204 more cars unnecessarily from a company who's product would have the same teething issues, be subject to the 25% Canadian Content requirement and not be immune from the same welding issues recall as the Bombardier order. Cause that makes total sense. /s
J

rbt said:
The customer needs to be willing to accept deliveries. Metrolinx is refusing deliveries until they have a yard to put them in. Warranty starts on delivery (ION discovered this too) so as a customer it's in your interest to delay delivery until the line is ready.
Click to expand...

Metrolinx is also getting free testing of the vehicles since there are 8 completed Waterloo vehicles there right now. Warranty only starts once the Final Acceptance Certificate is signed.


rbt said:
You can find at least one at Bombardier's Millhaven facilities where it's sat since 2016 waiting for Metrolinx. This is the same place Waterloo's cars waited at until they were ready to accept deliveries. There were half-dozen or more of ION cars at Millhaven but they've all been delivered by now.
Click to expand...

8 Waterloo cars assembled and awaiting installation of Waterloo's signal equipment (on a separate contract) in the Millhaven plant. Two of those are scheduled to be delivered to Waterloo soon.


rbt said:
We also don't know if Metrolinx has finished the design yet (which signalling system, communications hardware, etc. to include and their electrical/space requirements).
Click to expand...


rbt said:
Bombardier North America has (perhaps had) some serious issues; Metrolinx doesn't get an automatic pass because of that though.
Click to expand...

Blame for a lot of this should be on the province for their stupid protectionist procurement rules.


rbt said:
In the mean time, deliveries to Edmonton have started. Despite ordering later, Edmonton is ready to receive deliveries and as a result is receiving them.
Click to expand...

Waterloo would have gotten all of them sooner if they didn't wrongly instruct Bombardier to not deliver any more than 3 vehicles, especially since a rather large part of the vehicle testing Bombardier needs to do on the vehicles can't be done on the Millhaven test track because it's too flat, too straight, and too simple.
T 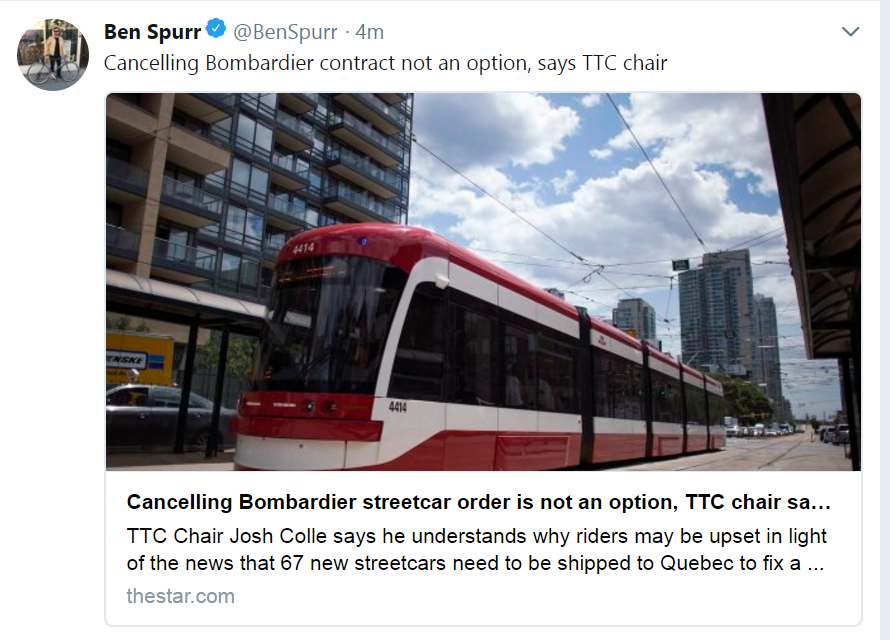 Admiral Beez said:
Look, I want to cheer for a Canadian firm that's kicking butt on the market. Has Bombardier Transportation given us anything to be proud of since the TR subways? If you worked at Bombardier Thunder Bay and walked into a bar in Toronto, what could you boast about?
Click to expand...

1) Successful delivery of the TR subway car fleet, which is a sensible and mature evolution from previous H and T subway models.
2) Succesful design and evolution of over 1000 bilevel GO cars.... a homegrown product which has won acceptance in the US.

What hasn’t Thunder Bay delivered on? The last true lemons from that plant were the 7 or 8 DMUs delivered to GO in 1967.

There’s a long story about that Sagahun plant in Mexico. It was a state subsidised plant that produced Mexico’s transit fleets in a protectionist, competition free environment for several decades. More recently, it has branched out into other ventures, including assembling locomotives for Progress Rail. The locos are the same model that EMD used to make in London, ON.... and the quality of the Sagahum product is notoriously bad. Bombardier made a bad decision to put the work for TTC in that plant. Hopefully, whatever exec proposed that has long since been fired by Bombardier. But that is not an indictment of the product, just the execution.

Bombardier has owned up to the problem and is eating the cost. That must be eating into their margin. I bet that bonuses are pretty slim on this project.

Sure, we could cry for blood.... but the product is OK and the price was good. Let’s not be so proud that we shoot ourselves in the foot.

I must ask then, what is your line in the sand or tipping point? What would Bombardier need to do to push you to view the project a failure and to consider alternative suppliers for future streetcars?
https://twitter.com/AdmiralBeez
Trending #BlockedInToronto on Twitter.
U

Admiral Beez said:
I must ask then, what is your line in the sand or tipping point? What would Bombardier need to do to push you to view the project a failure and to consider alternative suppliers for future streetcars?
Click to expand...

They are delivering steetcars that are perfectly functional. And they are standing behind the issues that their products may have.

Not sure where the line is. It it is certainly not drawn when a company is delivering the products.

Imagine if your boss fired you on the 3rd day because you made a mistake.

UD2 said:
Imagine if your boss fired you on the 3rd day because you made a mistake.
Click to expand...

If that’s analogous in your mind, then I think I can see it from your POV. Fair enough.
https://twitter.com/AdmiralBeez
Trending #BlockedInToronto on Twitter.
C

Admiral Beez said:
I must ask then, what is your line in the sand or tipping point? What would Bombardier need to do to push you to view the project a failure and to consider alternative suppliers for future streetcars?
Click to expand...

I would have said they were over the line for quite a while, until they began delivering acceptable product per schedule for two consecutive quarters.

Had they hid/denied this problem, or misrepresented their quality checkoffs generally, or done any of a number of things that leads TTC to say "we can't trust you" or "you don't know how to solve the problem", or "your product is shoddy and you aren't making it right", then yes one might walk away. But they are doing better than that.

I'm still in a zone where TTC should be seeking damages - and not letting the contractual language setting limits to liquidated damages get in the way of demanding more. But not cancelling the contract.

I wonder how bad the welds are though to incur 19 weeks of work
Click to expand...

Lack of space to do it in thunder bay due to the current production cars plus they are building the frames in Quebec now so they will prpbbly just strip the old ones out and put in new ones and send it back to Toronto.

Admiral Beez said:
If you worked at Bombardier Thunder Bay and walked into a bar in Toronto, what could you boast about?
Click to expand...

The general public of Toronto is completely ignorant when it comes to how transit works. They complain the system is broken every time there is a fire at track level or a "situation at track level". I was standing next to a person one time on a platform that was yelling at the guard because of that. I told them to shut up and stop complaining because that announcement means that someonehas either fallen on the tacks or jumped." Don't forget they also think that all work should be done at night and that closing the subway on the weekend is terrible because it inconveniences them.
T

So is the TTC still putting ALRVs in service, or are they more or less retired? I’ve been watching the cars come into service along Queen and King, and I’ve only seen one ALRV out of at least two dozen streetcars.

If this is a normal thing, we might not see any more ALRVS by winter (the A’s are especially unreliable in the season)
C

^There are ALRV’s running on the Lakeshore 501 now that it’s back. Seems like at least half the runs on Lakeshore are ALRVs.

TheTigerMaster said:
So is the TTC still putting ALRVs in service, or are they more or less retired? I’ve been watching the cars come into service along Queen and King, and I’ve only seen one ALRV out of at least two dozen streetcars.

If this is a normal thing, we might not see any more ALRVS by winter (the A’s are especially unreliable in the season)
Click to expand...

dowlingm said:
Can use this link to check at any time. Presently, there are eight.
https://www.transsee.ca/fleetfind?a=ttc&q=4200-4251&Go=Go&refresh=30
Click to expand...

So yea, with only 8 ALRVs out, looks like they’re damn close to retirement. I’ll cherish every moment if I ever ride one again

I would love to ride the classics for the first time -- the PCC and/or the Peter Witt -- before the system goes 100% pantograph and are incompatible with trolleypoles.