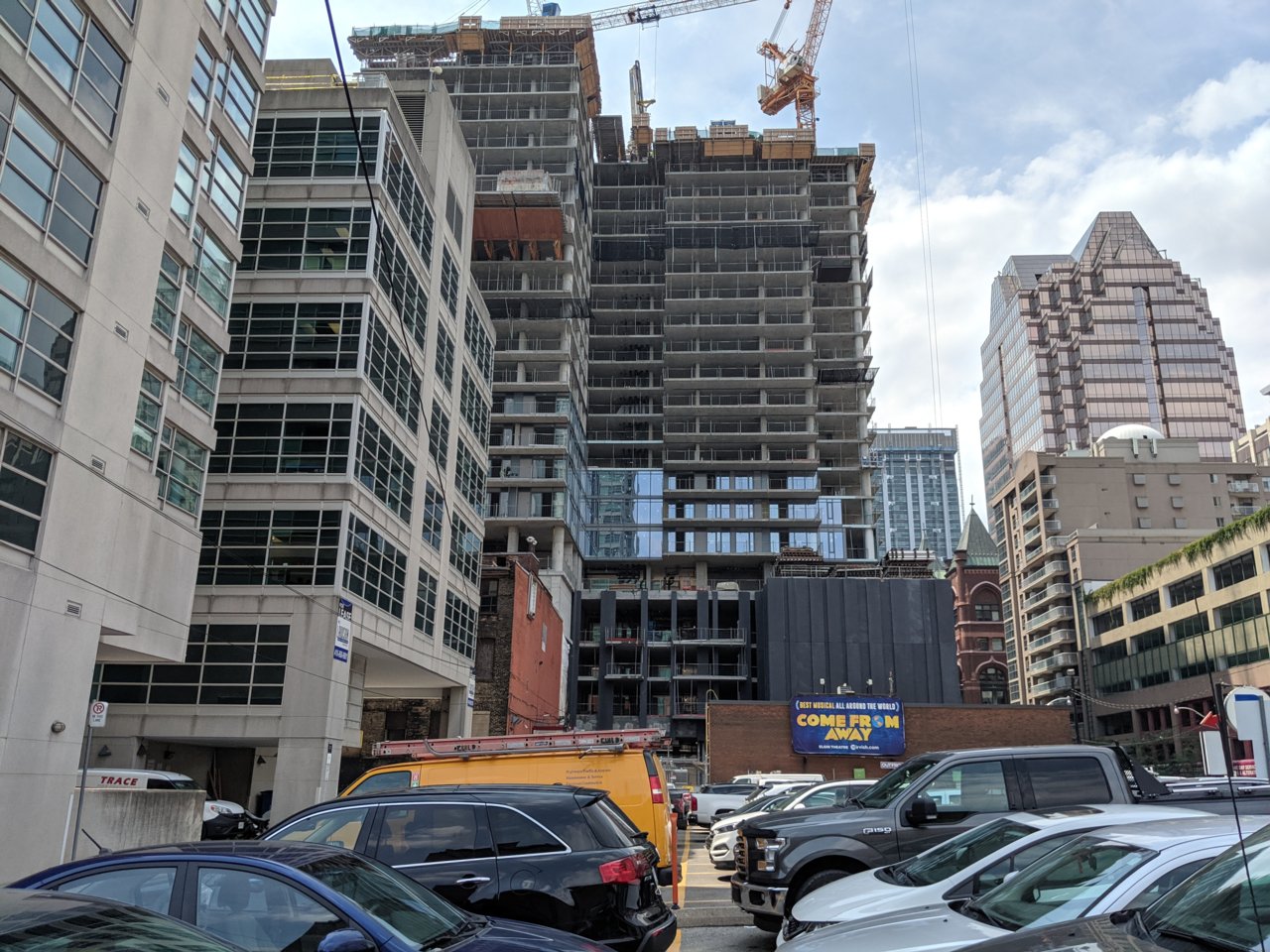 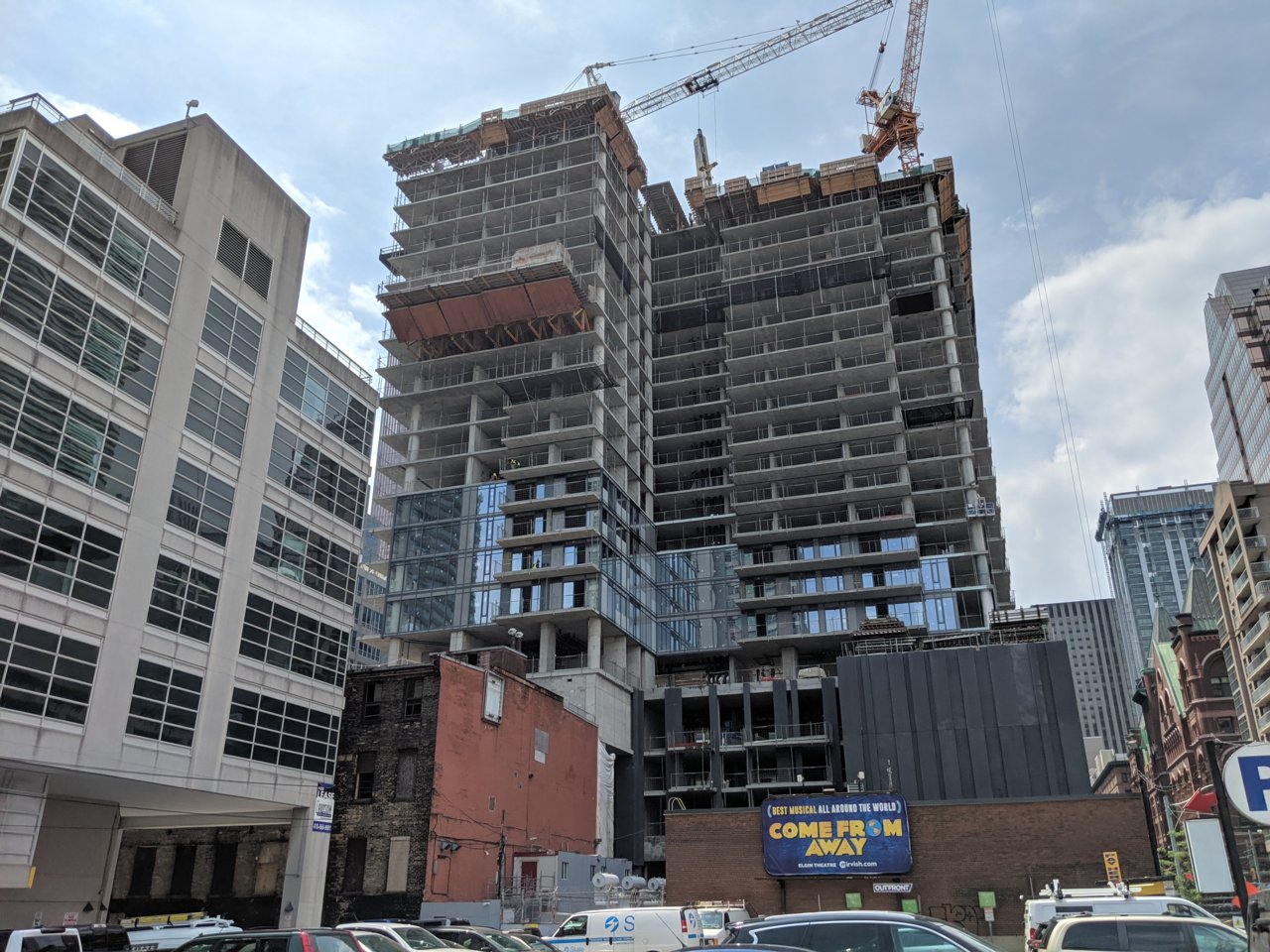 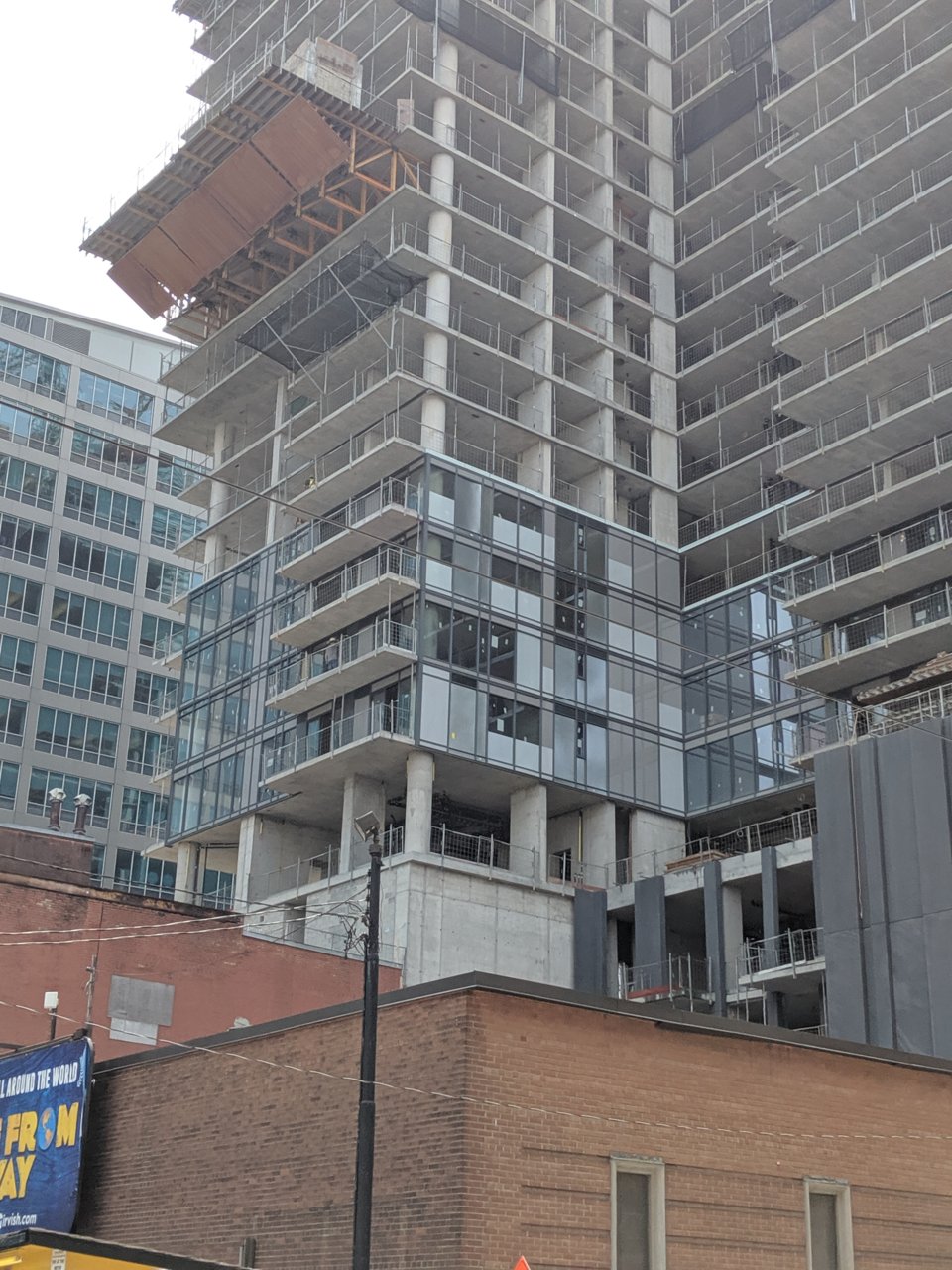 I'm loathe to add to the pile of recent whining but... given that a chunk of the original design was balcony articulation/design, any chance this will look a bit like the render promise?
LINK: Future SKYLINE render (updated July 2020) 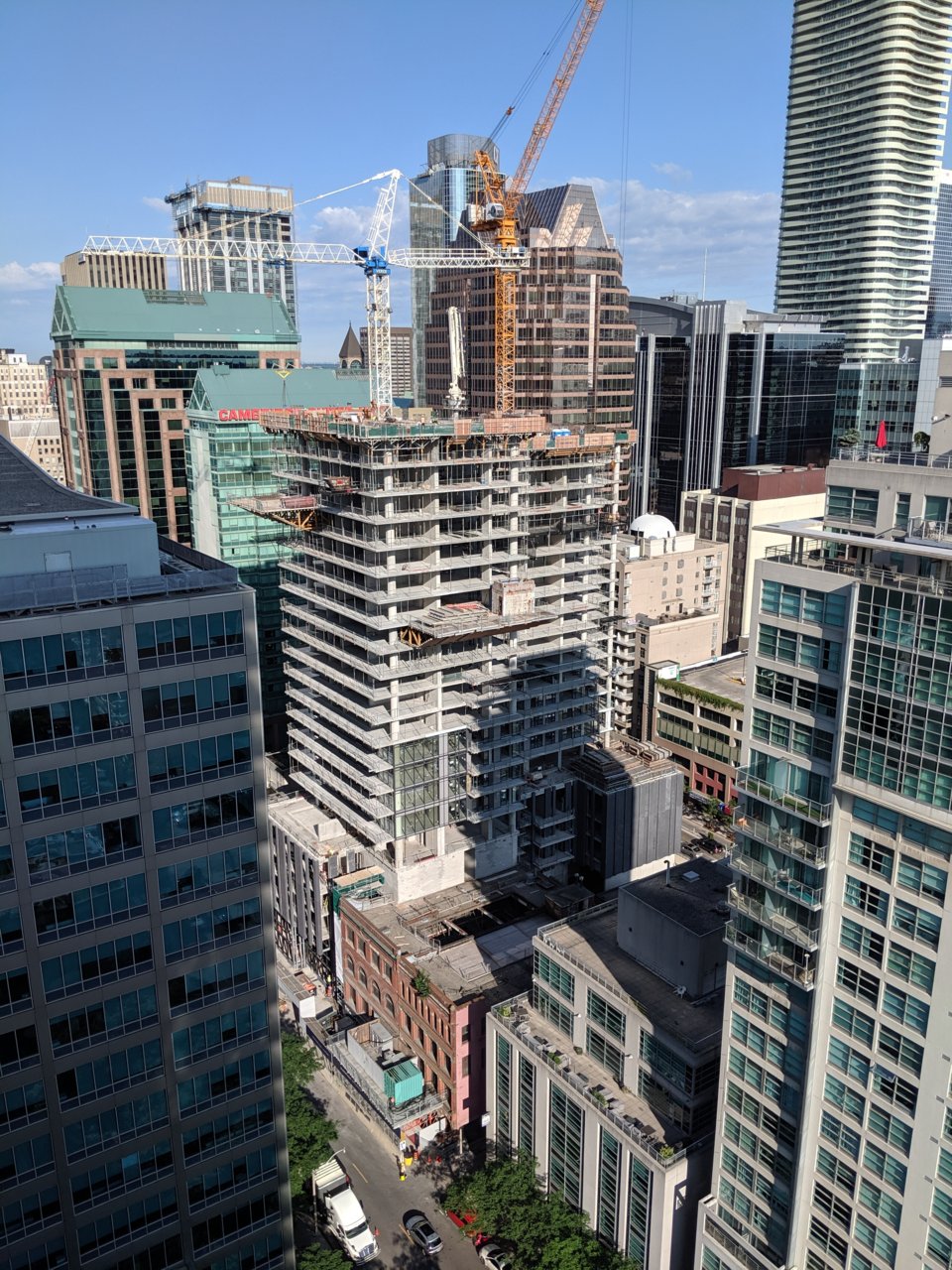 If you want to become REALLY sad, take a look at the 2013 rendering of this . It had interesting balconies, and red 'beams' on the podium rather than the boring grey/black. It was at DRP in 2013 and I would be interested in knowing what they said (but older DRP minutes seem to be no longer on City website. Now it is just a rather boring building that does ZERO for the area.. Ahhhhhh

Great Gulf releases the first full-building rendering of its 50-storey Yonge + Rich condo project in Downtown Toronto. The project features an exterior the changes on each corner of the architectsAlliance-designed building. 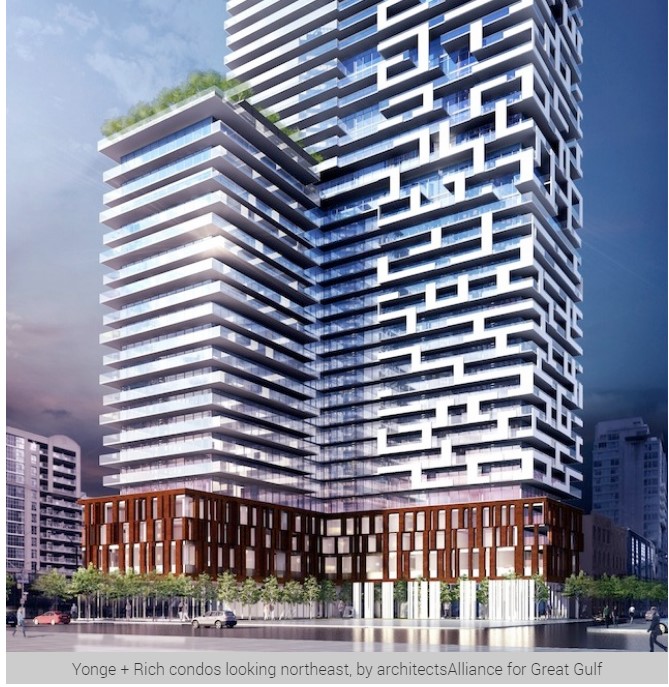 Introduction
City staff outlined the area context, history and area policy priorities and sought Panel's advice on the following:
The applicant team described the design rationale and responded to questions from the Panel.
Chairs Summary of Key Aspects Needing Improvement
Response to Context / Site Plan Design
9 DESIGN REVIEW PANEL MINUTES: Meeting 2 – February 21, 2013
Built Form and Articulation
 The proposal contradicts the Downtown Tall Building Guidelines in a number of ways:
 The submission package was clear and revealed the design process and evolution which members of the Panel appreciated.
Sustainability
 The project was in a very preliminary (massing) stage and sustainable design issues were not discussed.
Related Commentary
Panel was appreciative of the project coming at the early conceptual stage of design, and the inclusion of an alternative (2-tower) massing scheme within the briefing package. They were appreciative of some elements of the 1-tower scheme, but felt that it was too tall and contained too much massing. Members were interested in the alternative 2-tower scheme, as it appeared to alleviate some of their concerns with the 1-tower scheme (for example, impact on the public realm, and sky view). However, their fundamental concerns with height and density remained and Members did not support either options for this reason.
Please comment on the design of the base and the tower step back in the context of the site’s sensitive heritage streetscape.
Members felt the modern expression of the base worked well against the heritage context, particularly the first 4-storeys. However, with minimal tower step back from the base - on Lombard as well as Richmond - they felt the heritage properties were overwhelmed and compromised by the proposal (they did not feel "autonomous").
Please comment on how well the proposal complies with the Downtown Tall Buildings Vision and Performance Standards Design Guidelines, including setbacks and floor plate size.Members noted that one of the objectives of the Downtown Tall Building Study is to develop buildings in a manner which sensitively fits into their context and makes a positive contribution to the streets and public realm surrounding them. They felt that while the proposal contained some positive public realm components (heritage restoration, through block connections), that on the balance, it was not making a positive impact. The proposal was described variously as being overly bulky, massive, containing too much density and massing, being too compromised, and "over the top".
Height
Members expressed strong support for the Downtown height vision which was recently endorsed by City Council, and suggested that this proposal should comply with it. They were cognizant that a 50 storey tower in this location would set a precedent for others to follow, and felt that the proposed
10 DESIGN REVIEW PANEL MINUTES: Meeting 2 – February 21, 2013
height – being nearly twice as high as the Downtown vision – was not suitable or appropriate. One Member also noted that the proposed height was similar to the first project reviewed during this session (58 storeys at Yonge and Eglinton), and that this project was in a location where these heights were much more appropriate (the intersection of higher-order transit).
The Official Plan suggests tall buildings be designed in three parts (base, middle, top) carefully integrated into a single whole. Please comment on the design and the integration of these three parts as a coherent composition.
Members were not supportive of the disposition of massing. In addition to comments noted above relating to bulk and floor plate size, they also noted the contradiction in terms within the notion of a 20-storey base element, and suggested that the base and tower being in the same plane was unsuitable.
Response to Context and Heritage
Noting the considerable quality and character of the existing heritage fabric, Members identified the opportunity with this proposal to contribute an equally remarkable "heritage" building for the future. They suggested the quality and character of the existing heritage buildings should inform the design response of the new proposal, and that while this was partly evident in the base expression, the overall design was too massive and overwhelming in scale, character and form - both for the historic structure on site and the one adjacent to it
Lombard Street
Members were quite excited by the character of Lombard Street, which they felt extended far beyond the historic listed properties to include the 1960's Dickinson-style office building and a 1990's condominium. They felt the approach to address this street within the 2-tower scheme (the first 10 storeys, at least) was significantly more successful in contributing to this broader character of Lombard Street than the 1-tower scheme.
Heritage building at Lombard & Victoria:
One Member was of the impression that this property has site specific zoning which permits greater density on it. The applicant and staff were encouraged to examine this further, noting that it could have significant implications for the proposed scheme.
Comments to Staff
Panel was comfortable with the cantilevered building mass over the heritage structure in the 2-tower scheme as a means of preserving historic fabric in-situ, and as a creative way of dealing with issues of height and density. They noted that this approach was not "facadism", that it provides the heritage structure with "breathing room", and that it would contribute to the broader historic character of Lombard street. Conversely, they felt that the 1-tower scheme was compromised in the absence of this cantilevered approach, and encouraged staff to consider more flexibility in way that new and old can work together to get a better disposition of built form.
Site Plan Design 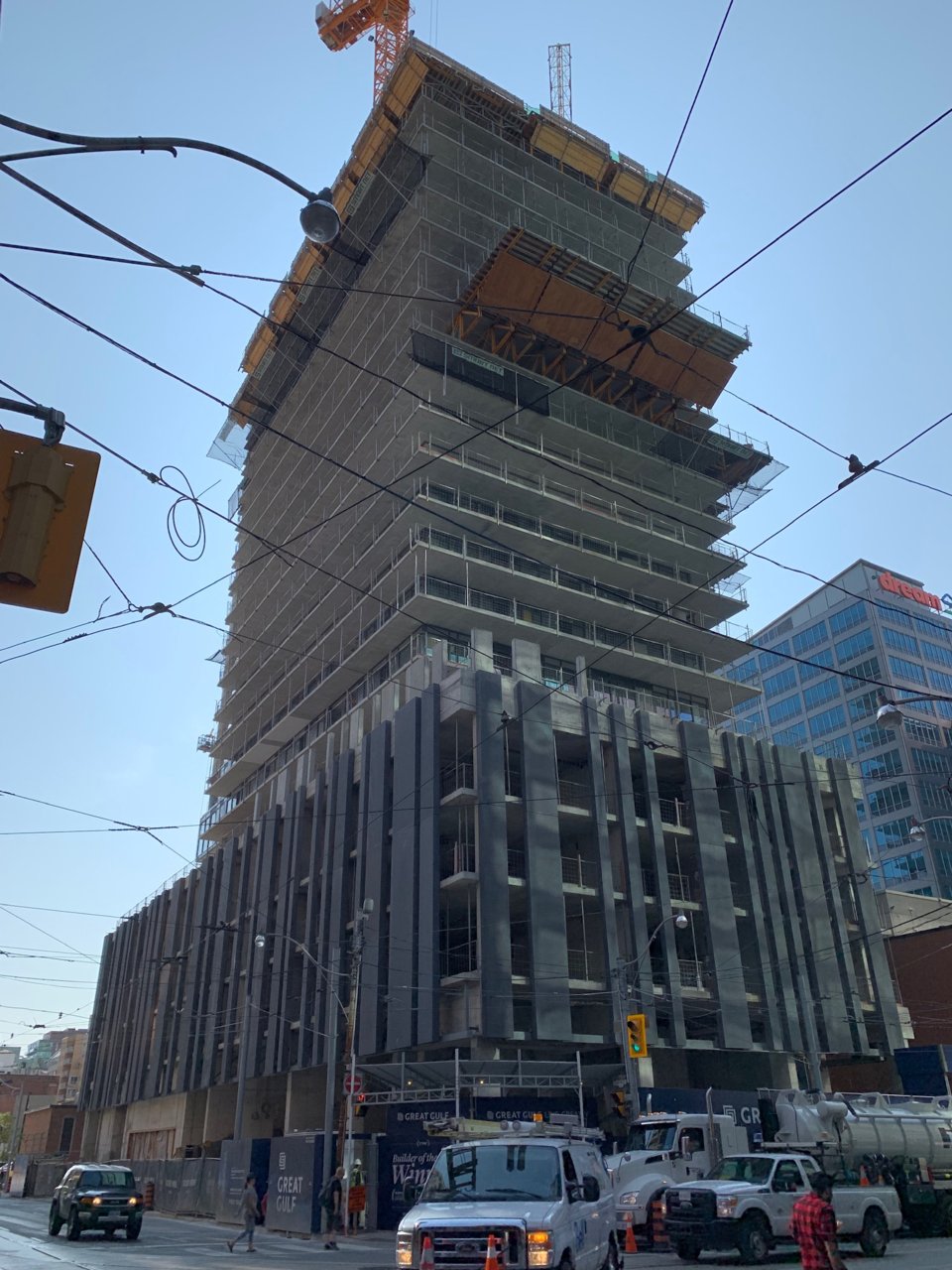 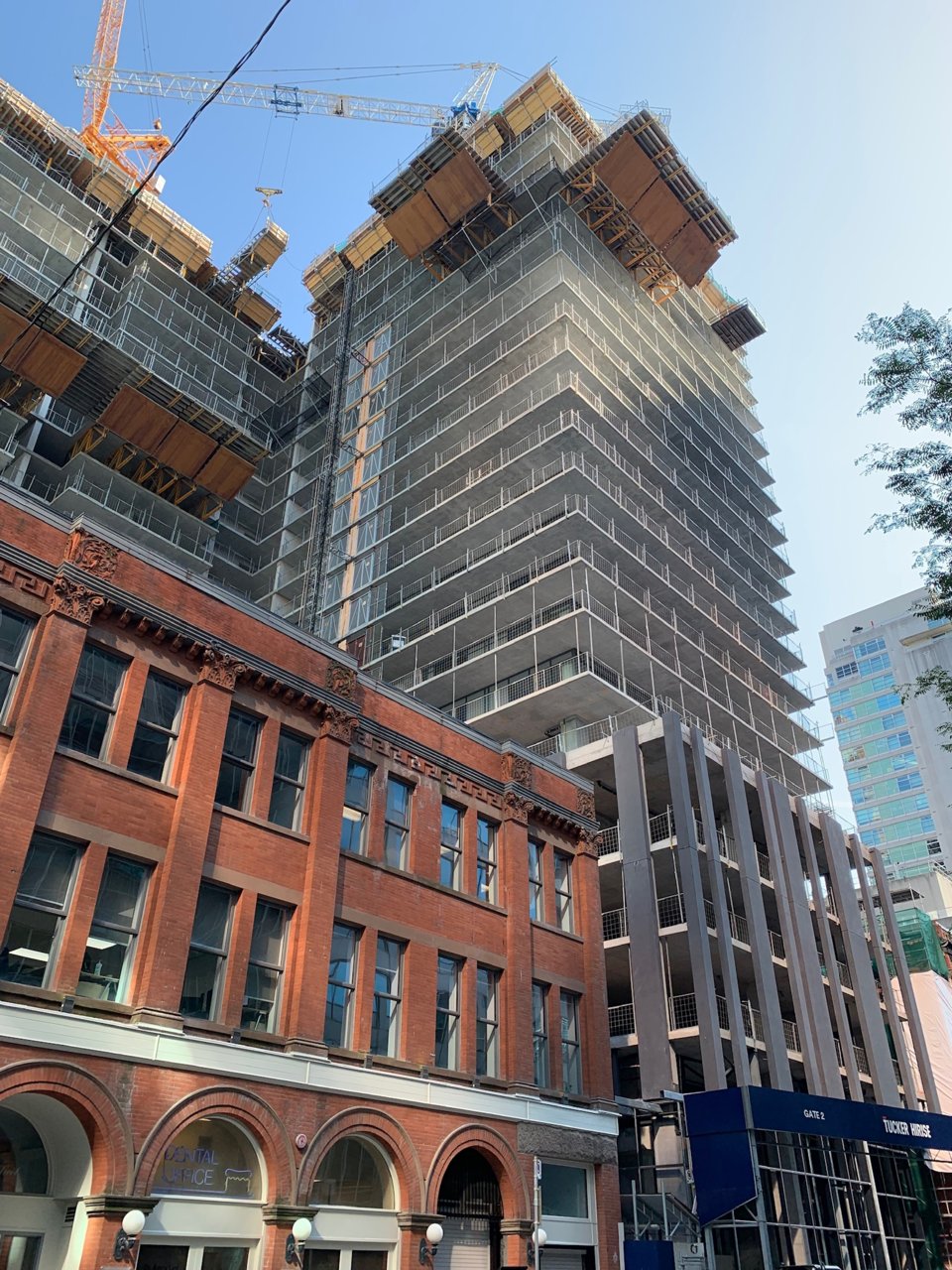 it appears that the majority of the concerns raised at the 2013 DRP meeting haven't been resolved according to the minutes above. Joy. 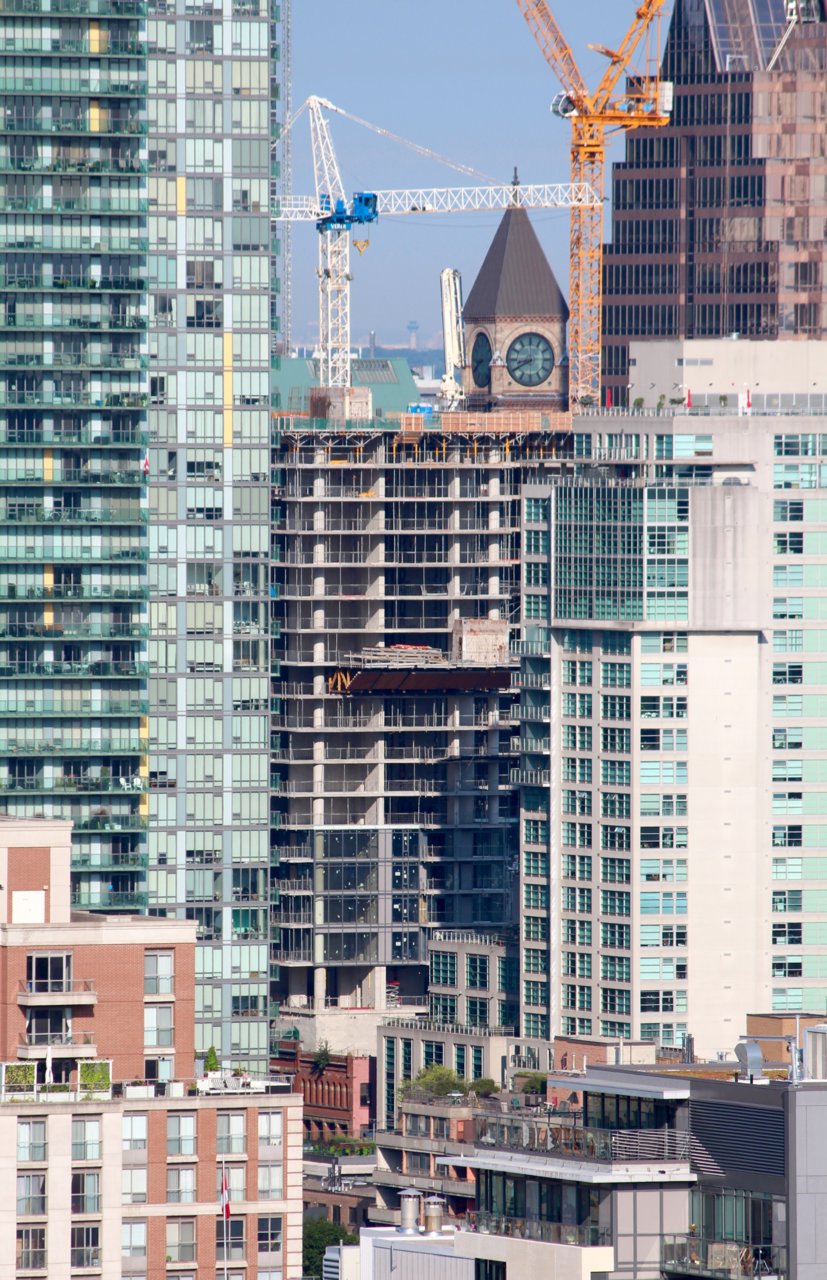 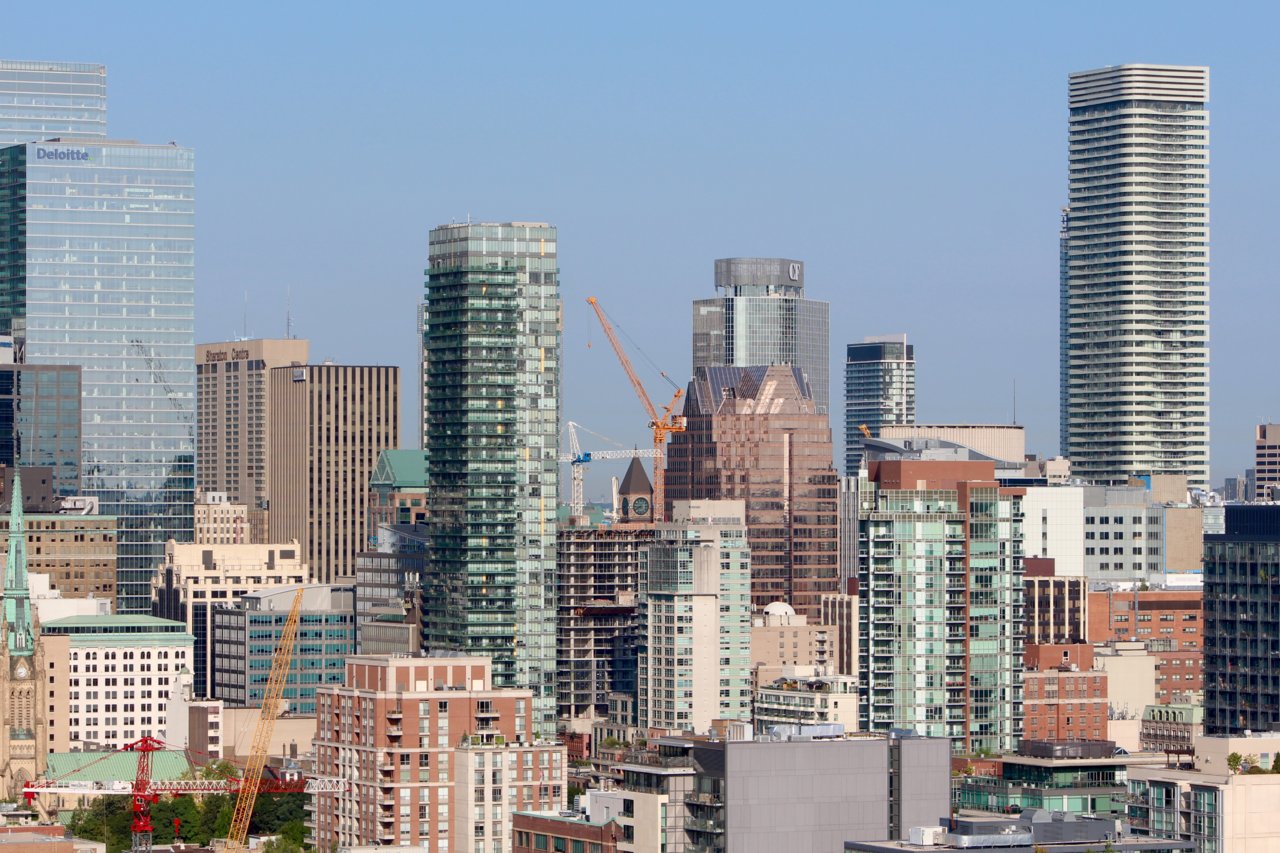 Farewell Old City Hall clock tower. Very sad that I will see you no more.

Now you’ll have to buy a clock And amazing that you can see the control tower at Pearson in that first shot!
J

The view from 5th floor of State Street Office 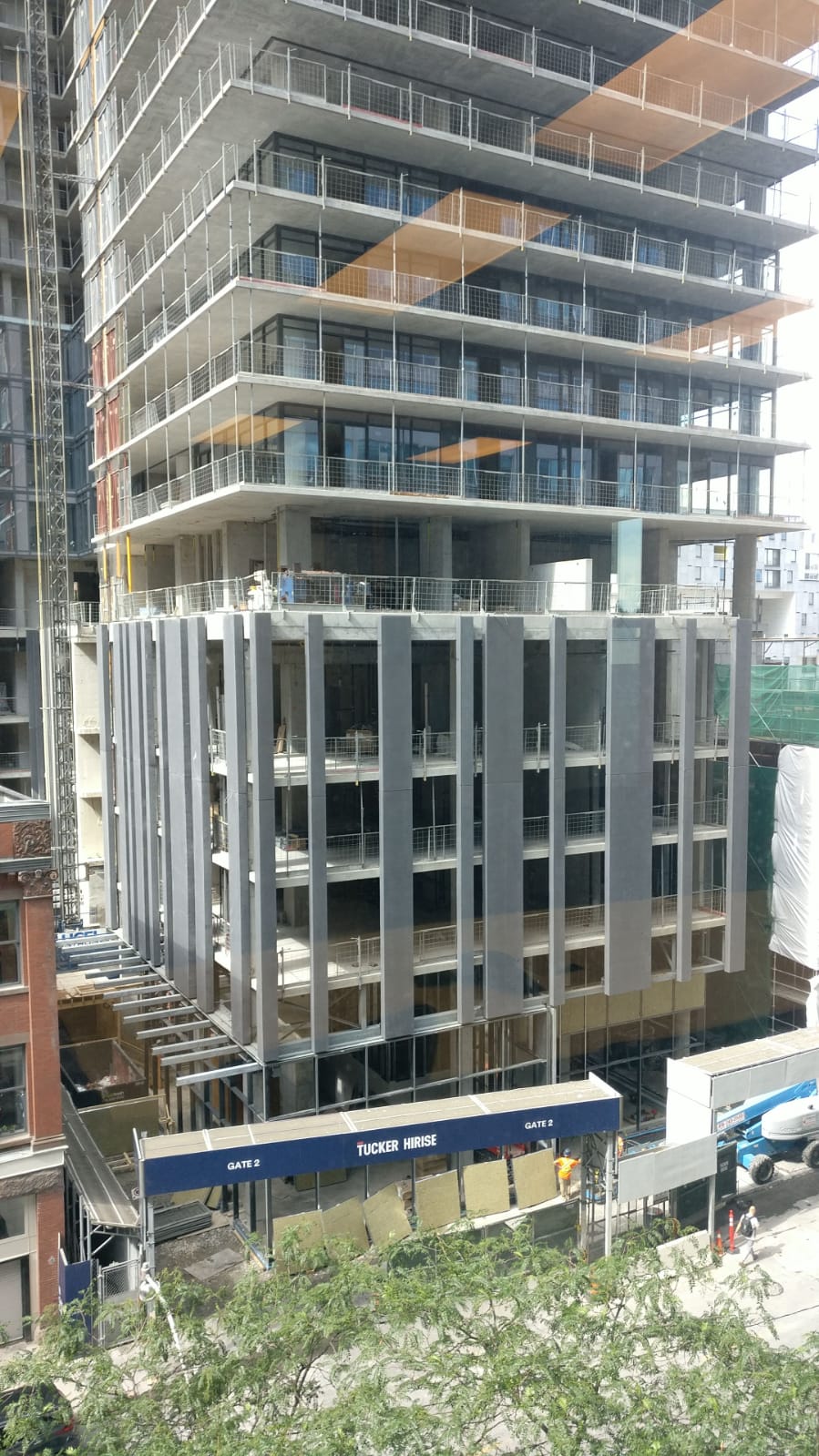 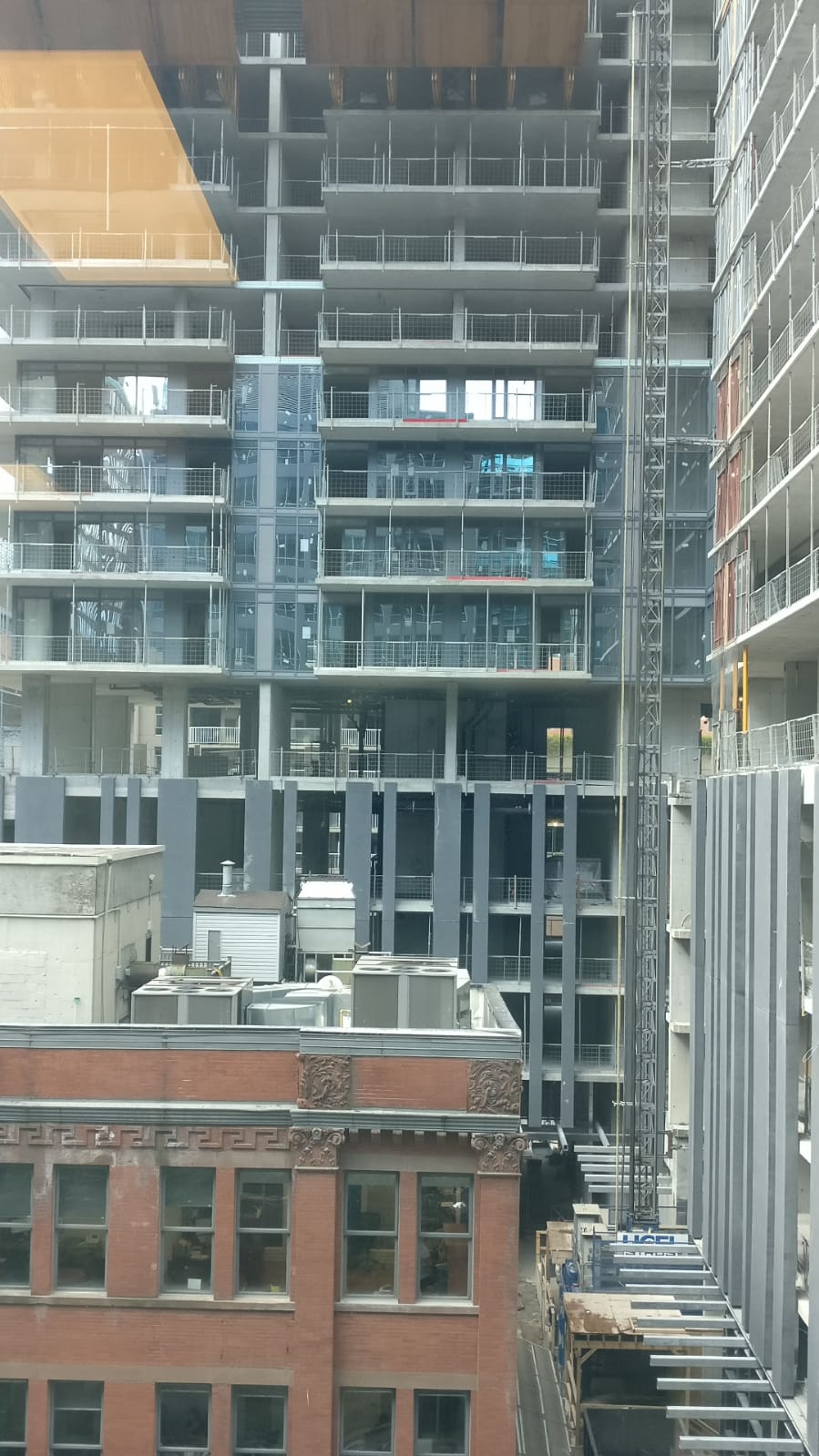 Nice view looking north up Victoria St. from 25 The Esplanade. 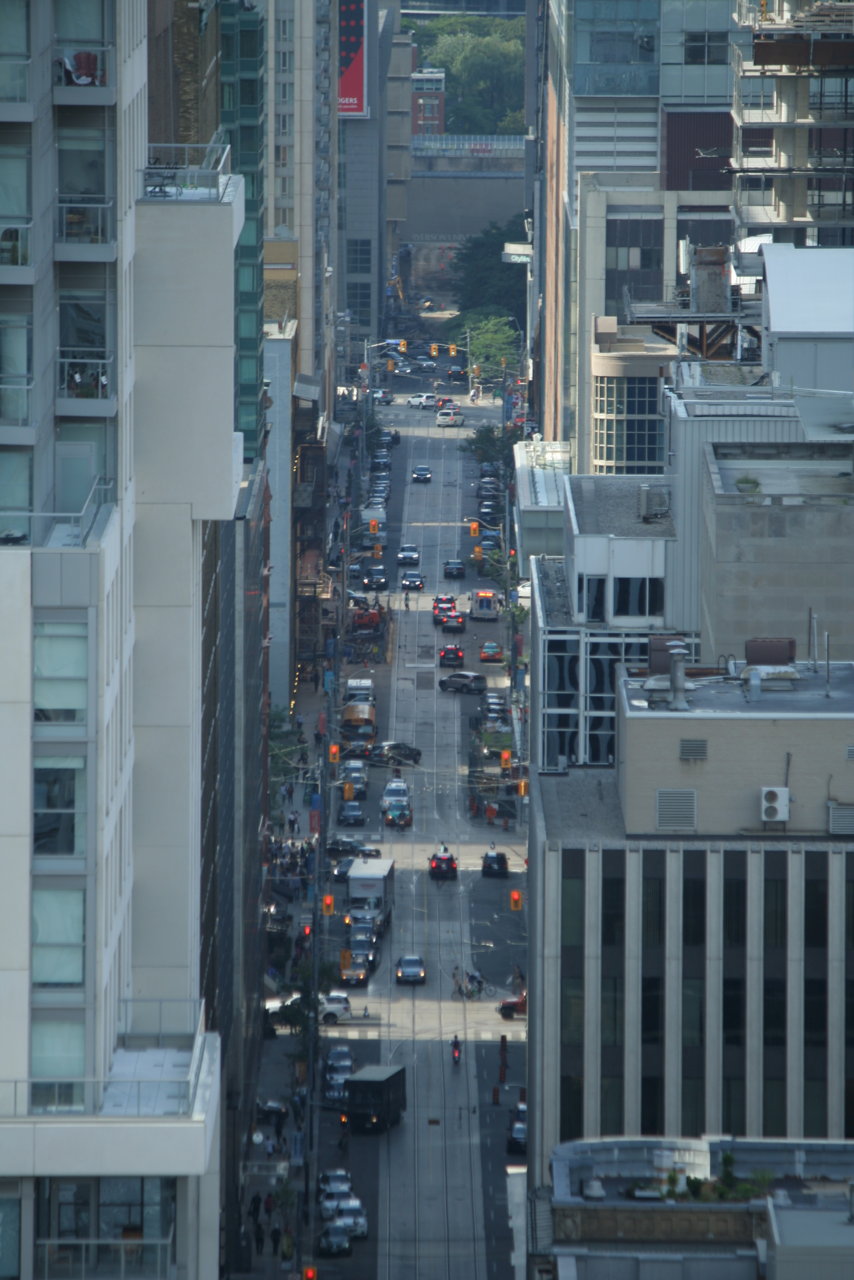 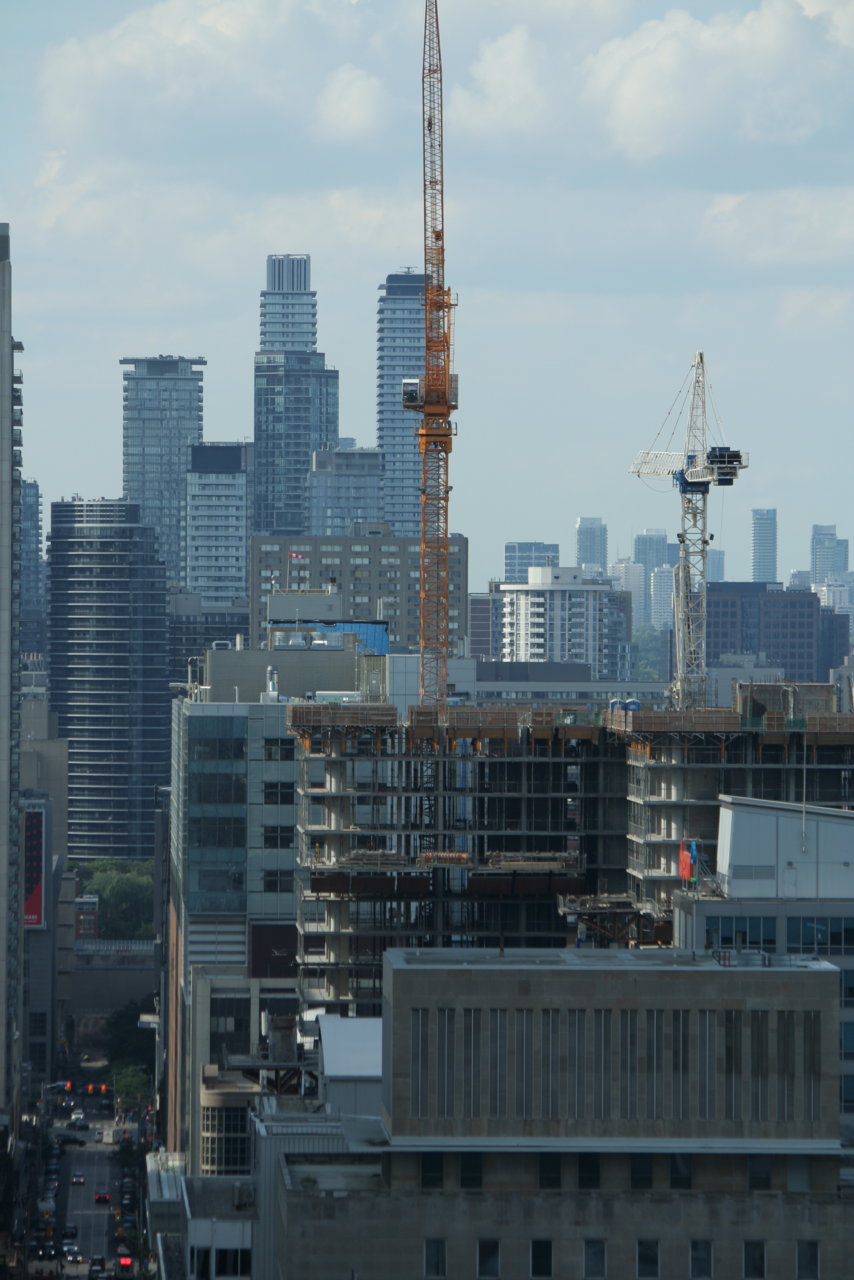 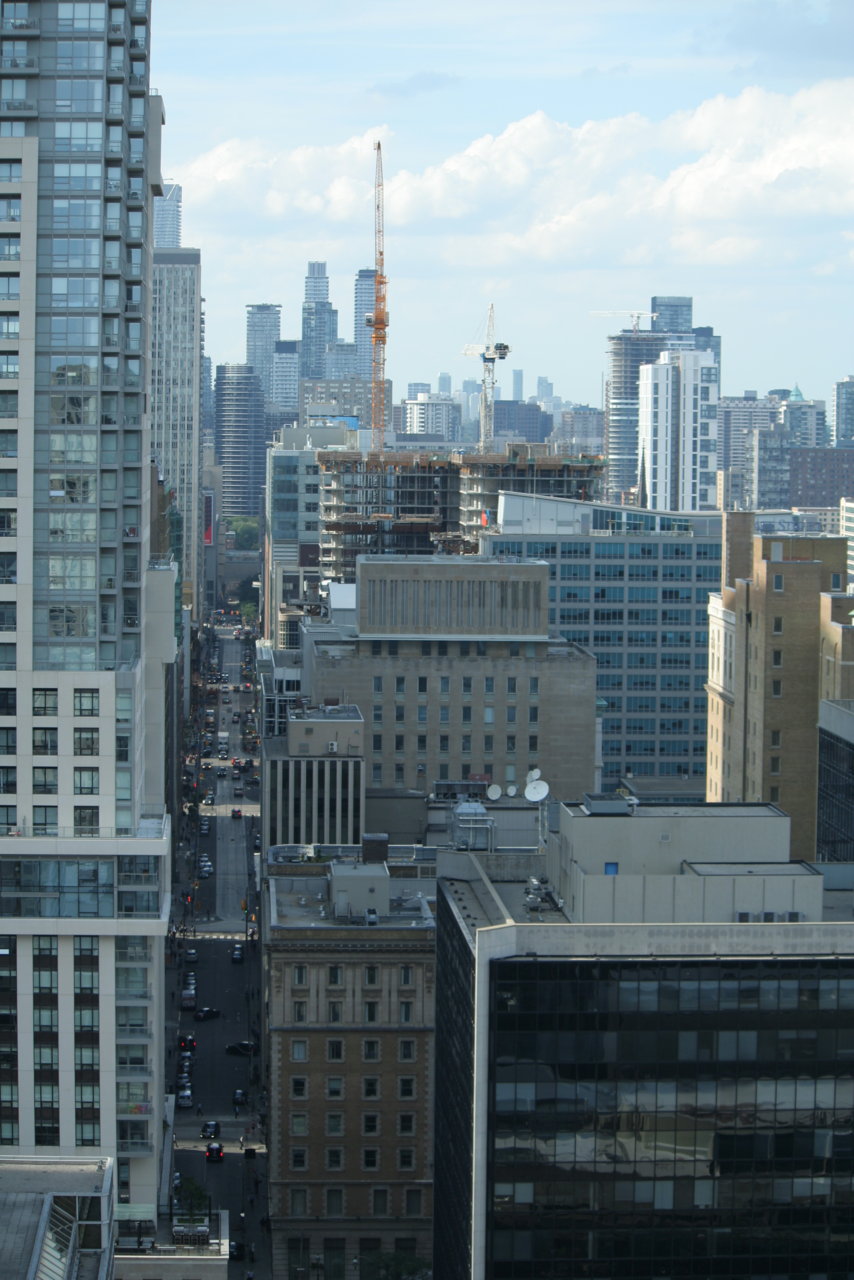 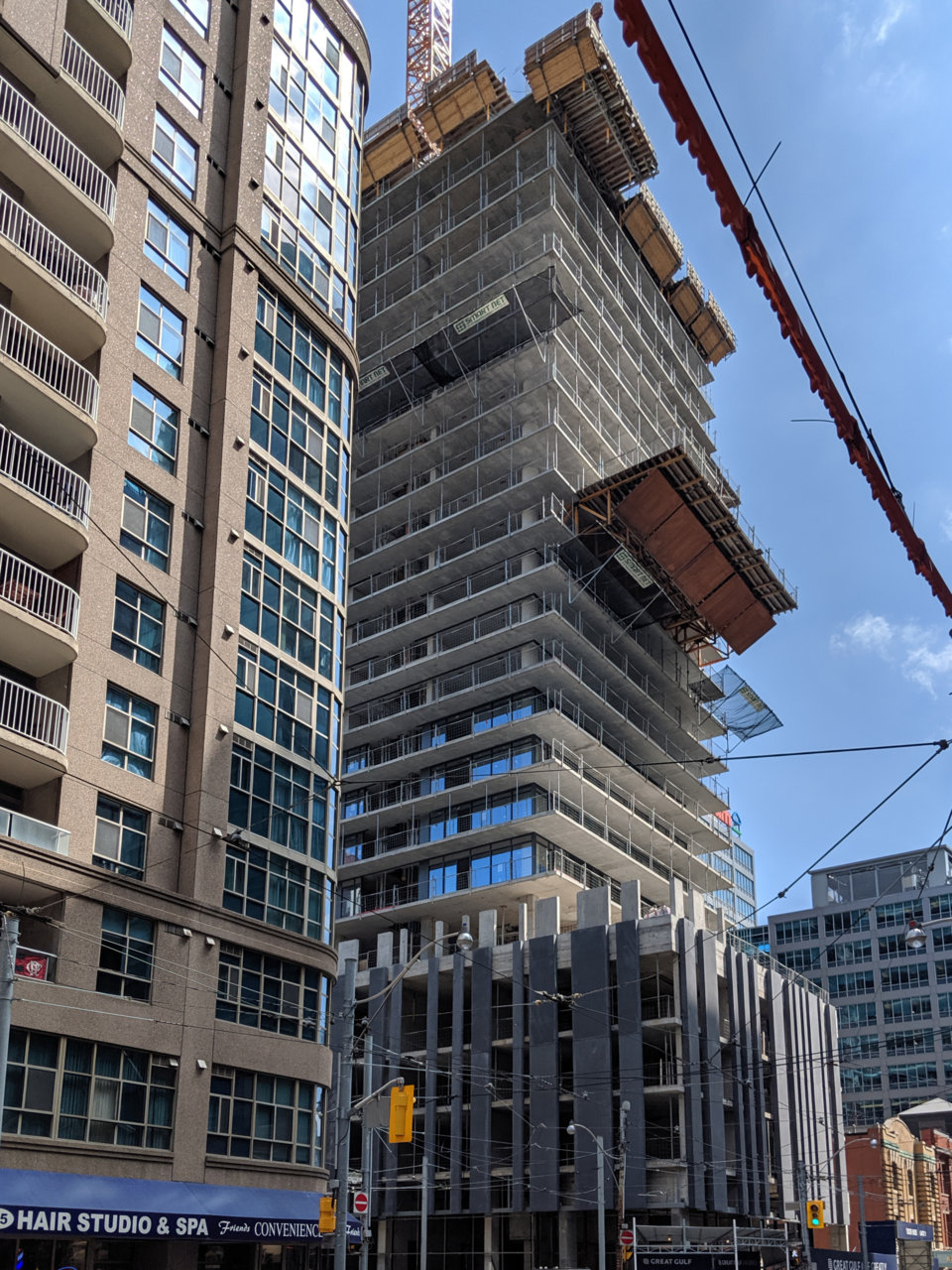 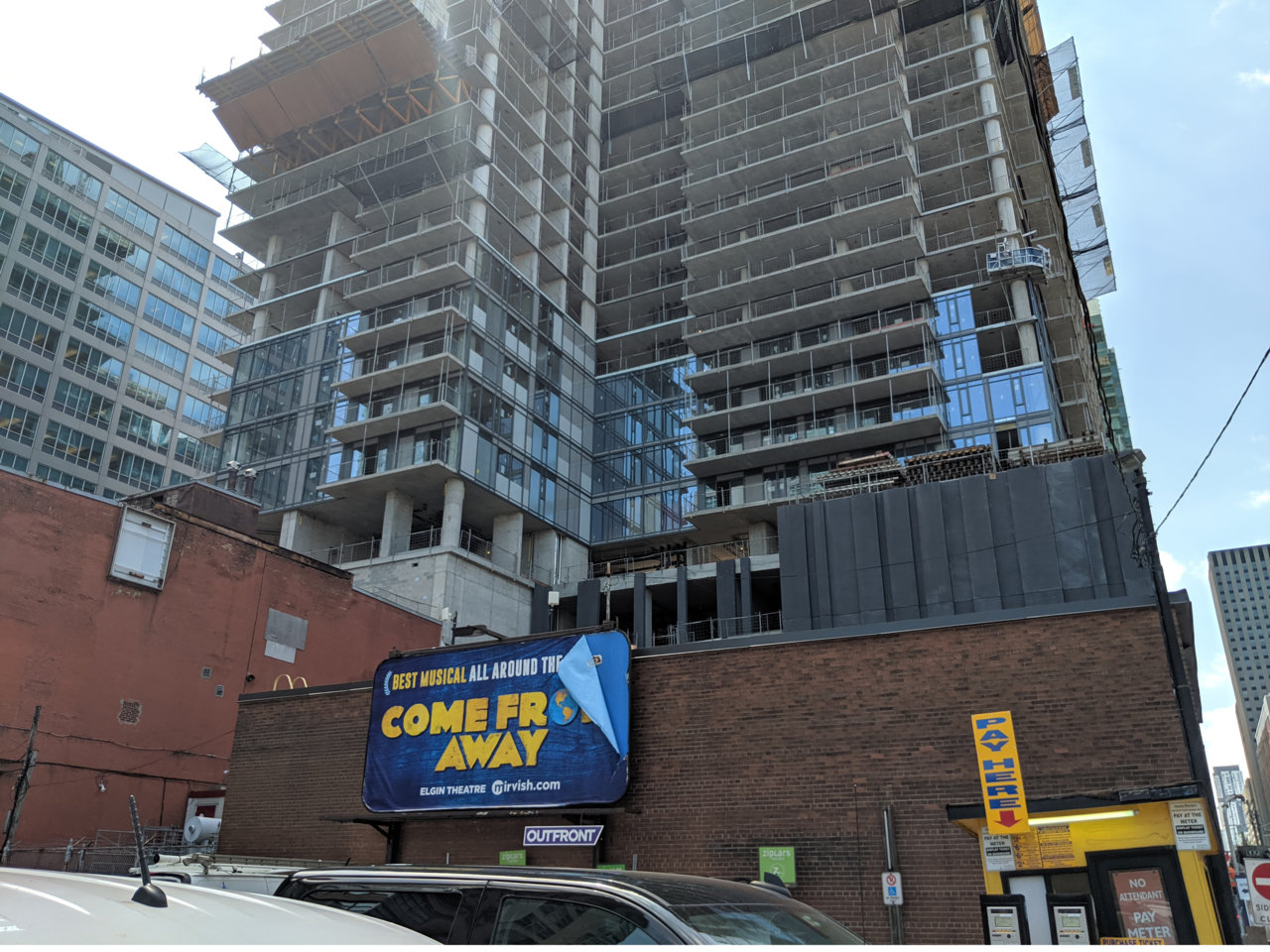 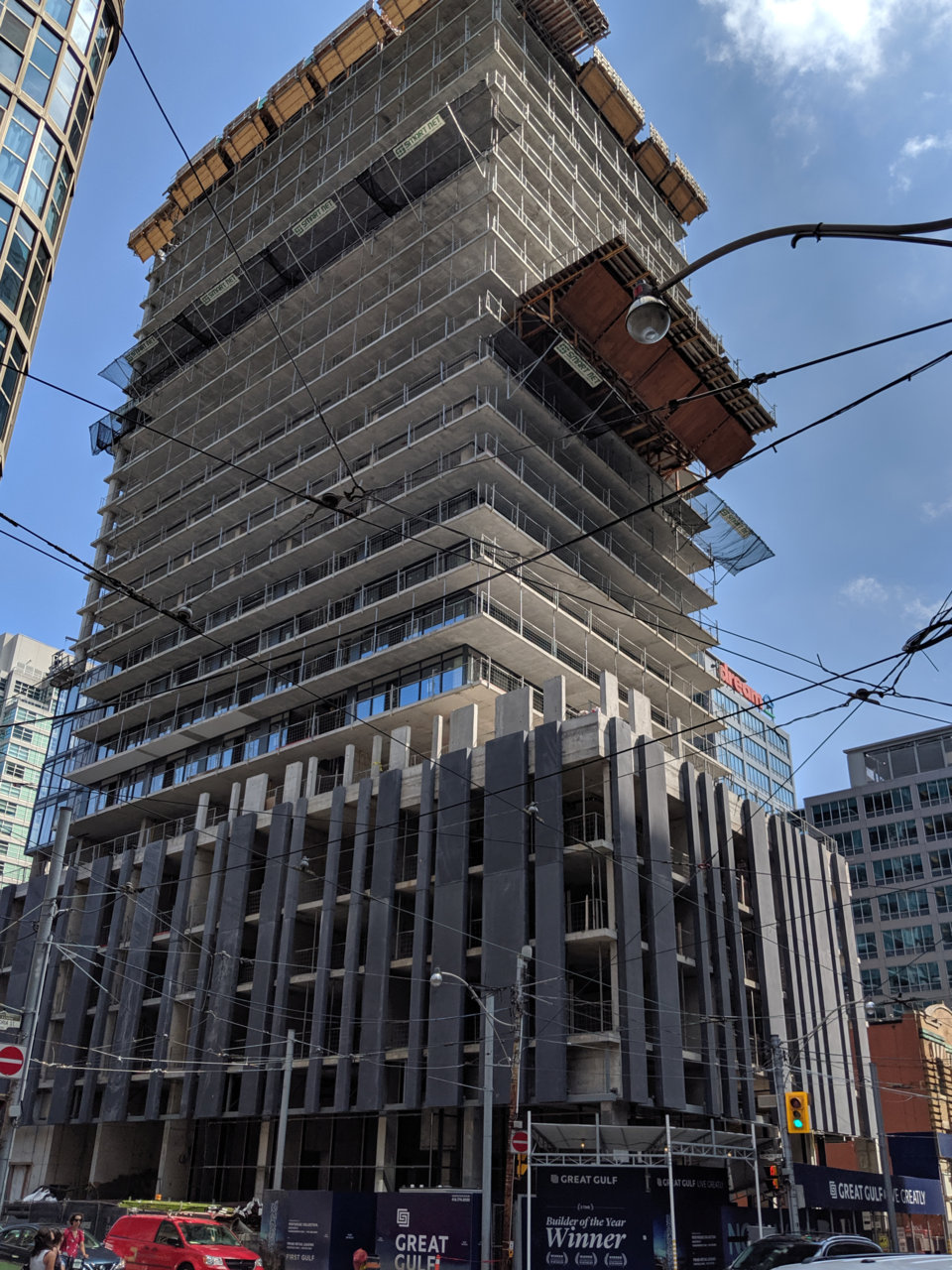 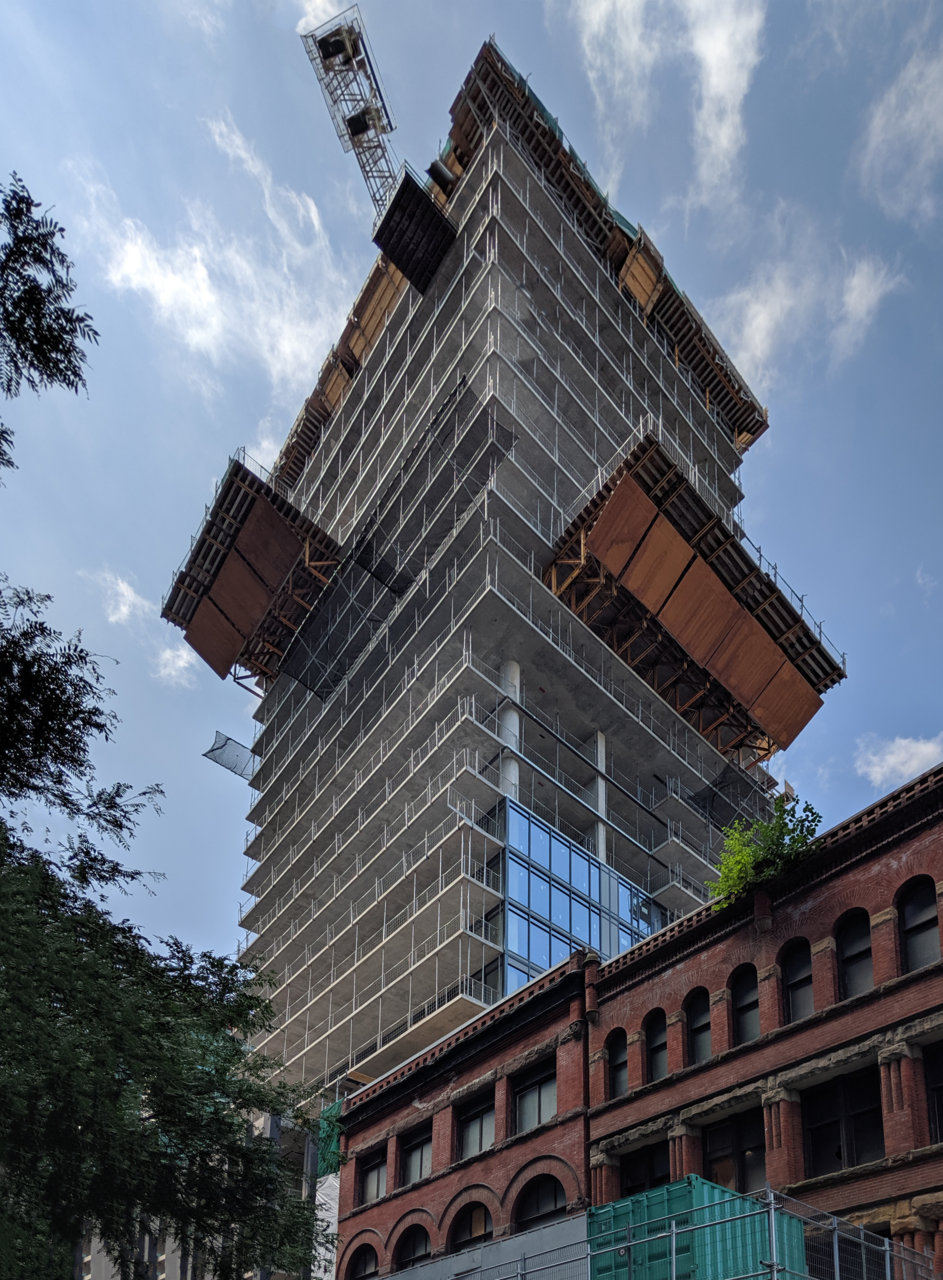 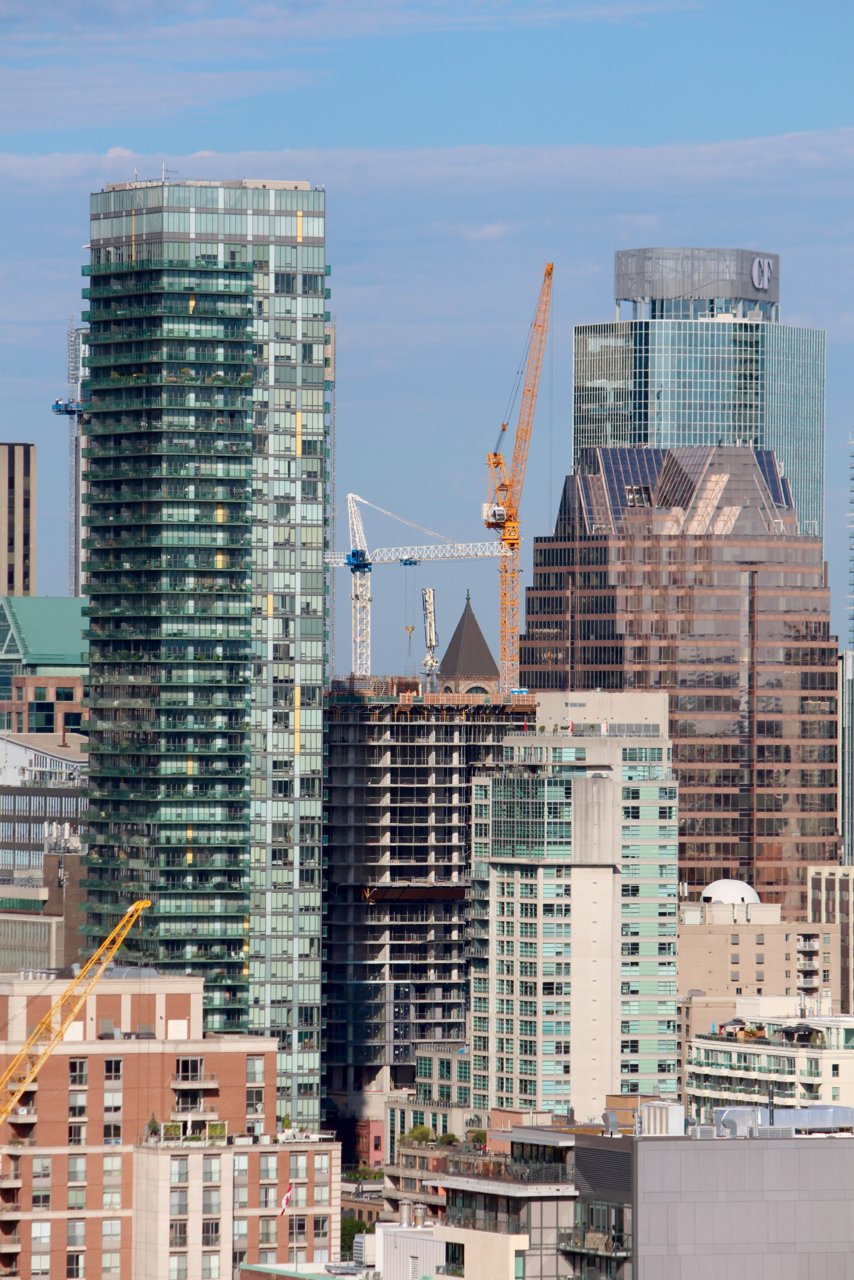 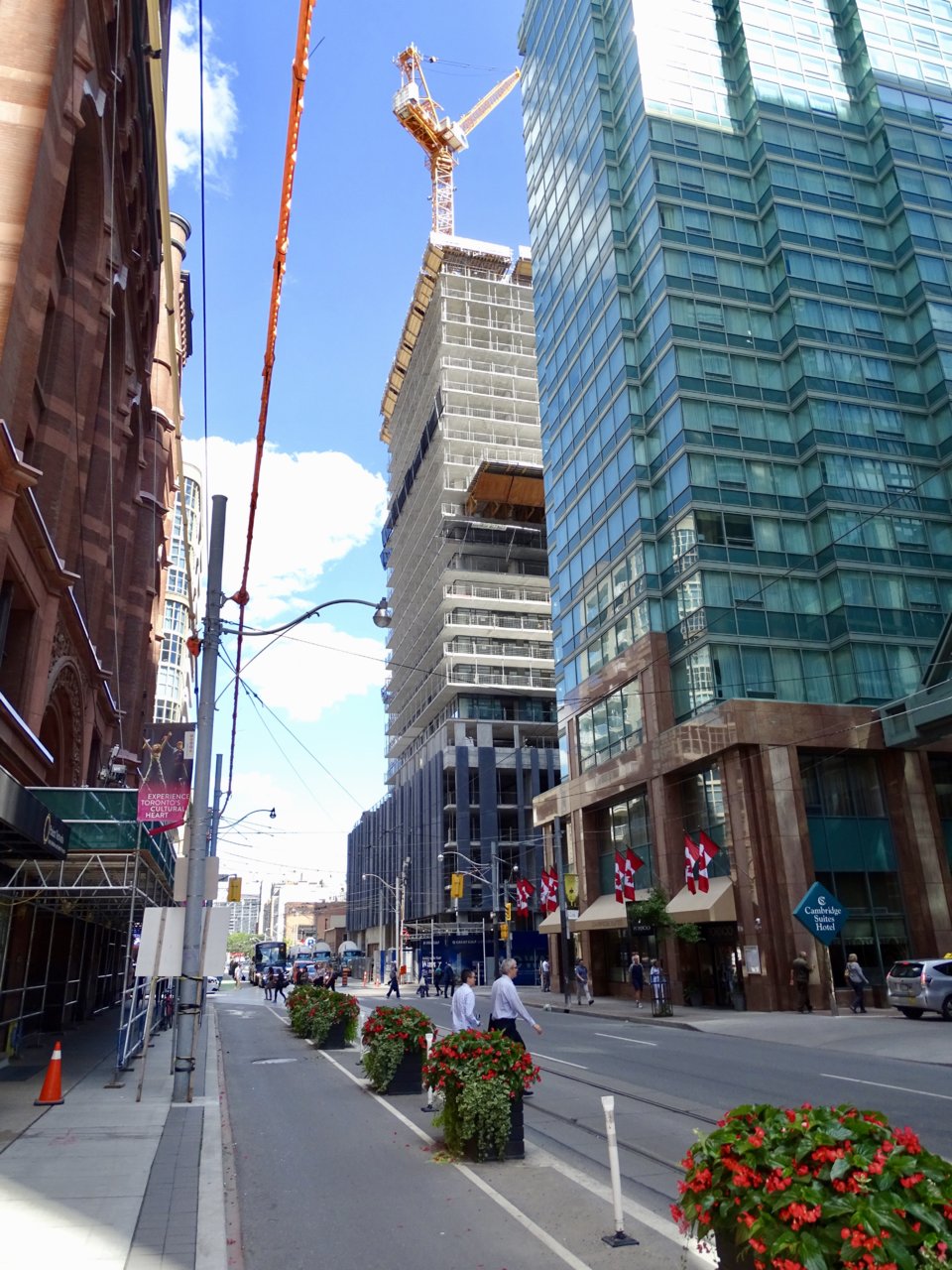 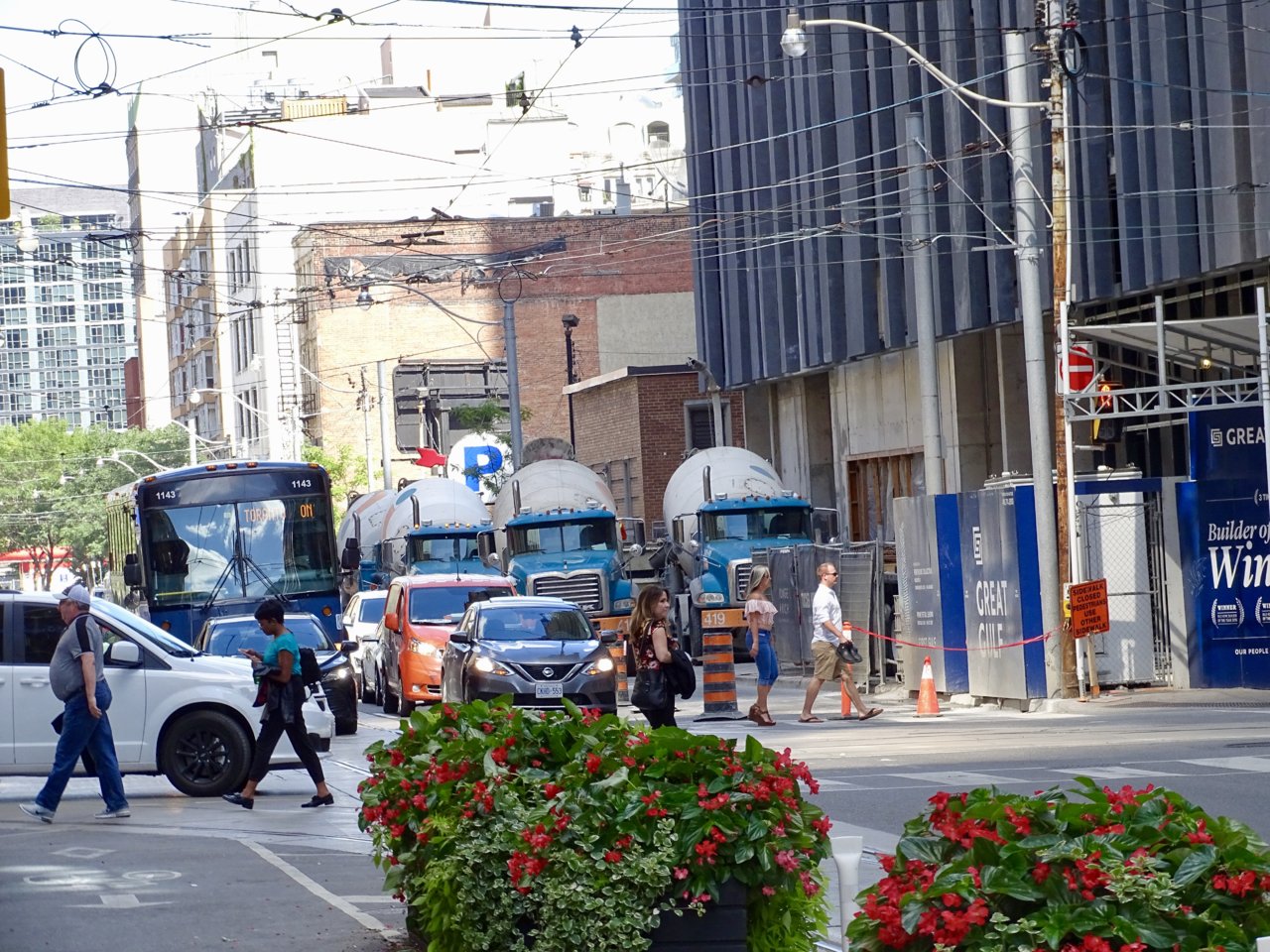 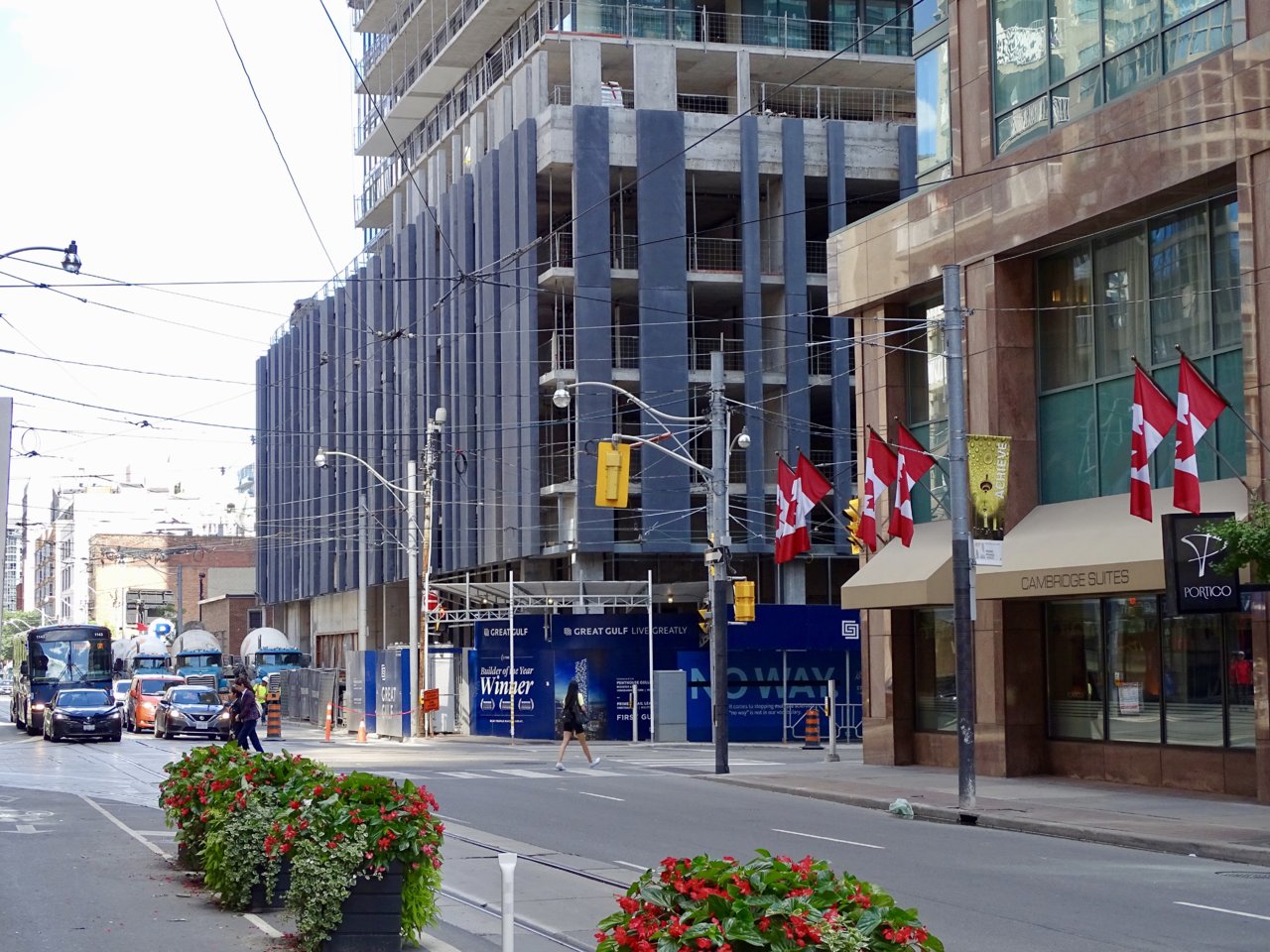 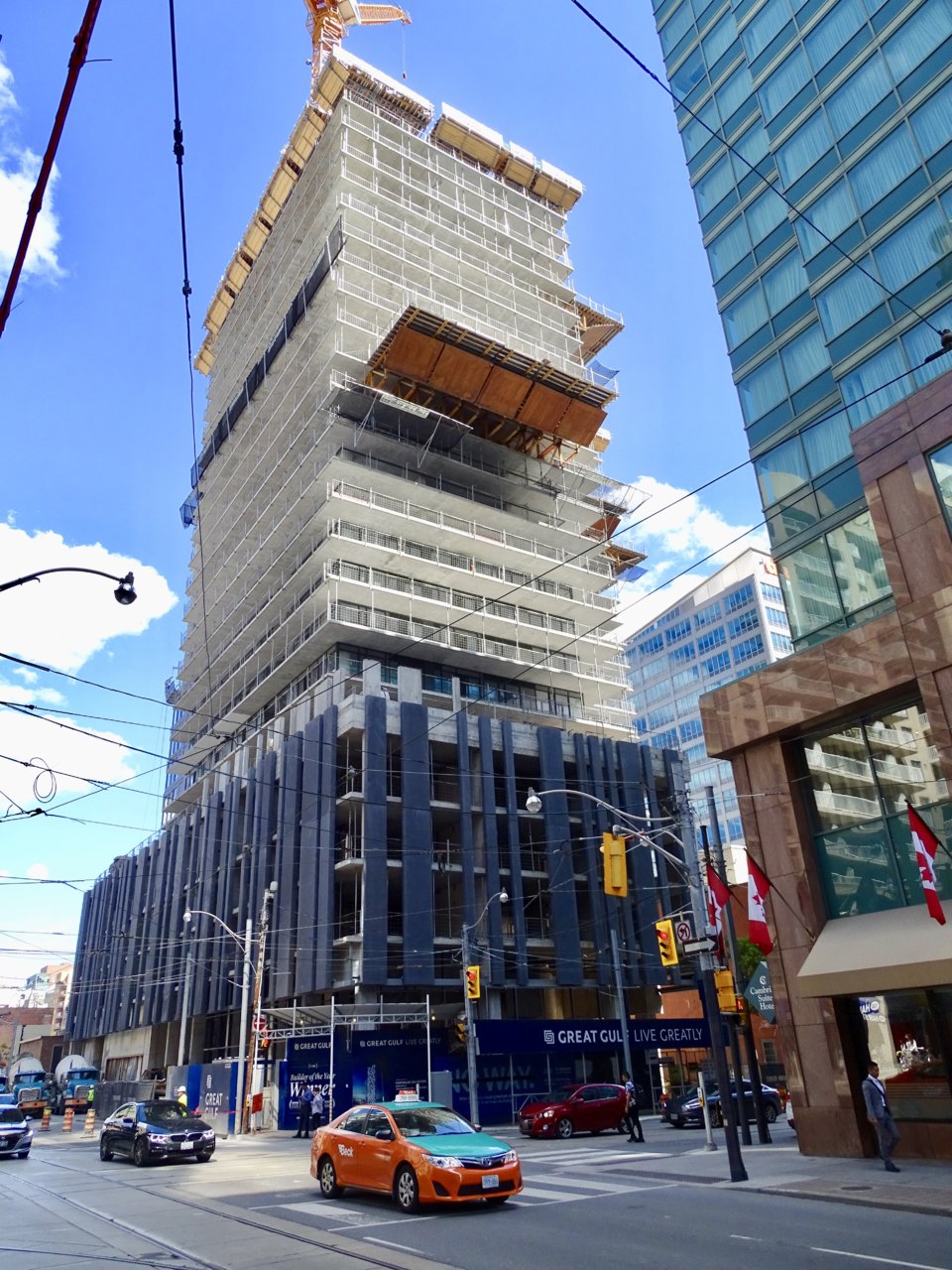 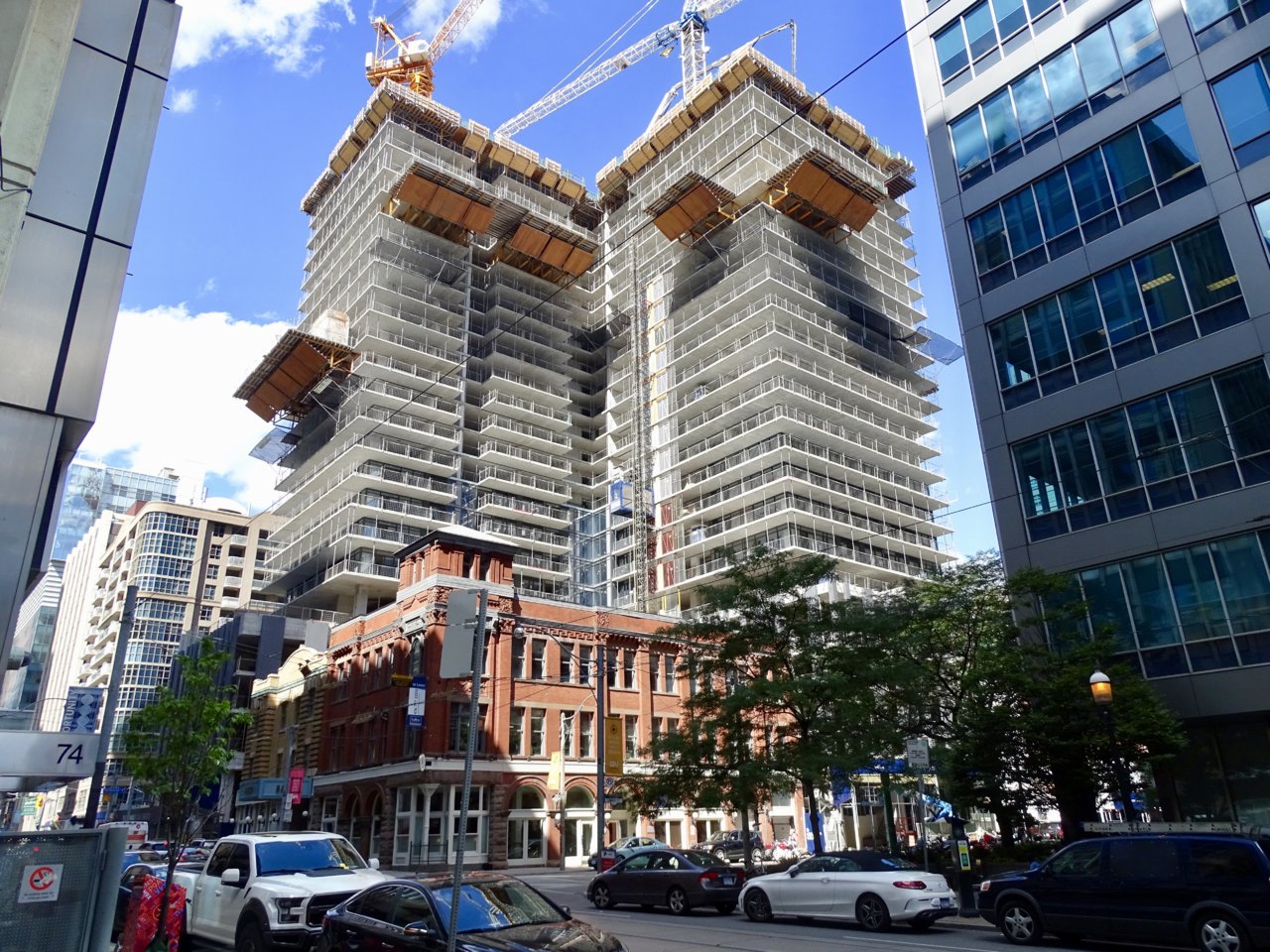 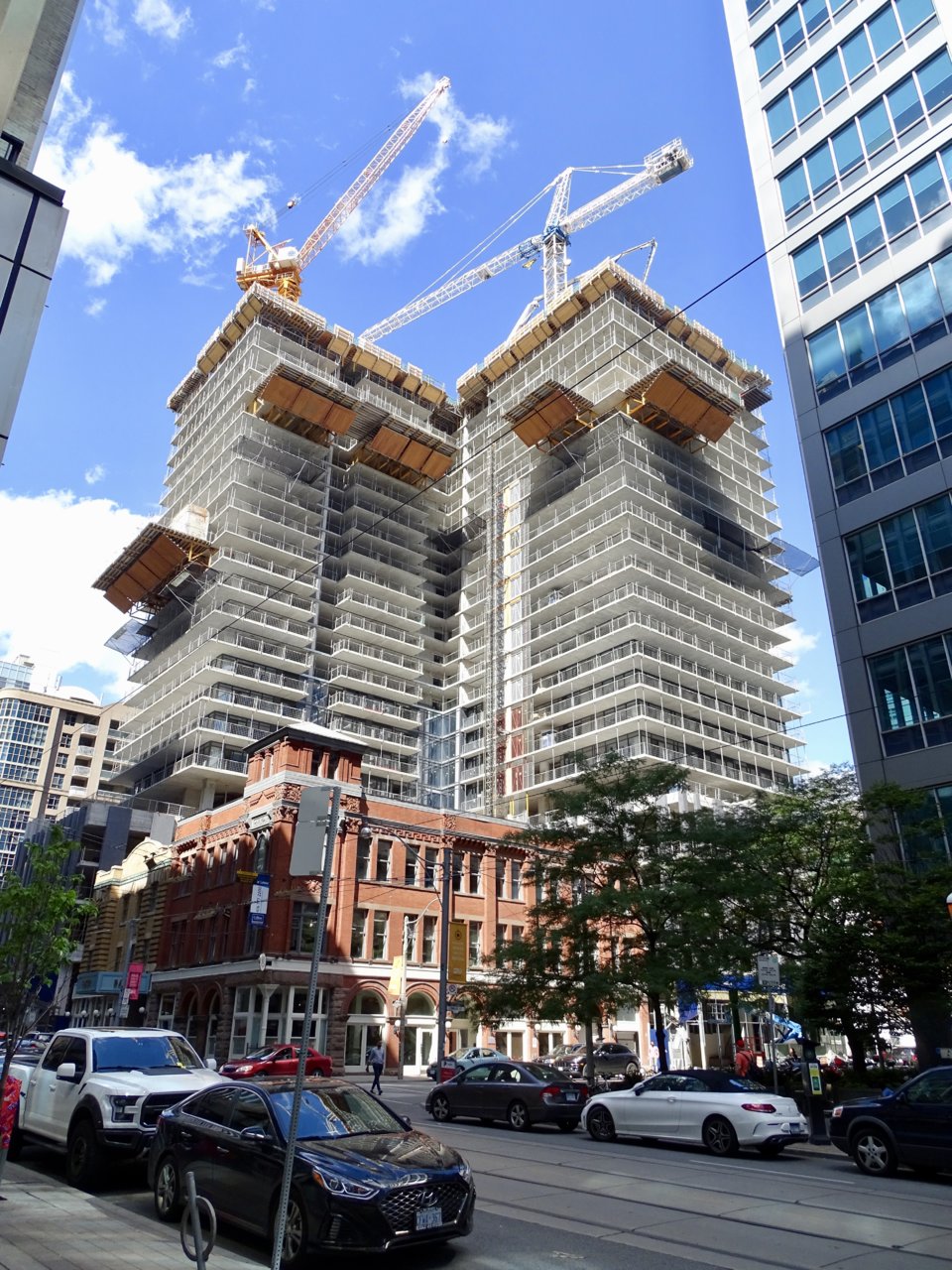 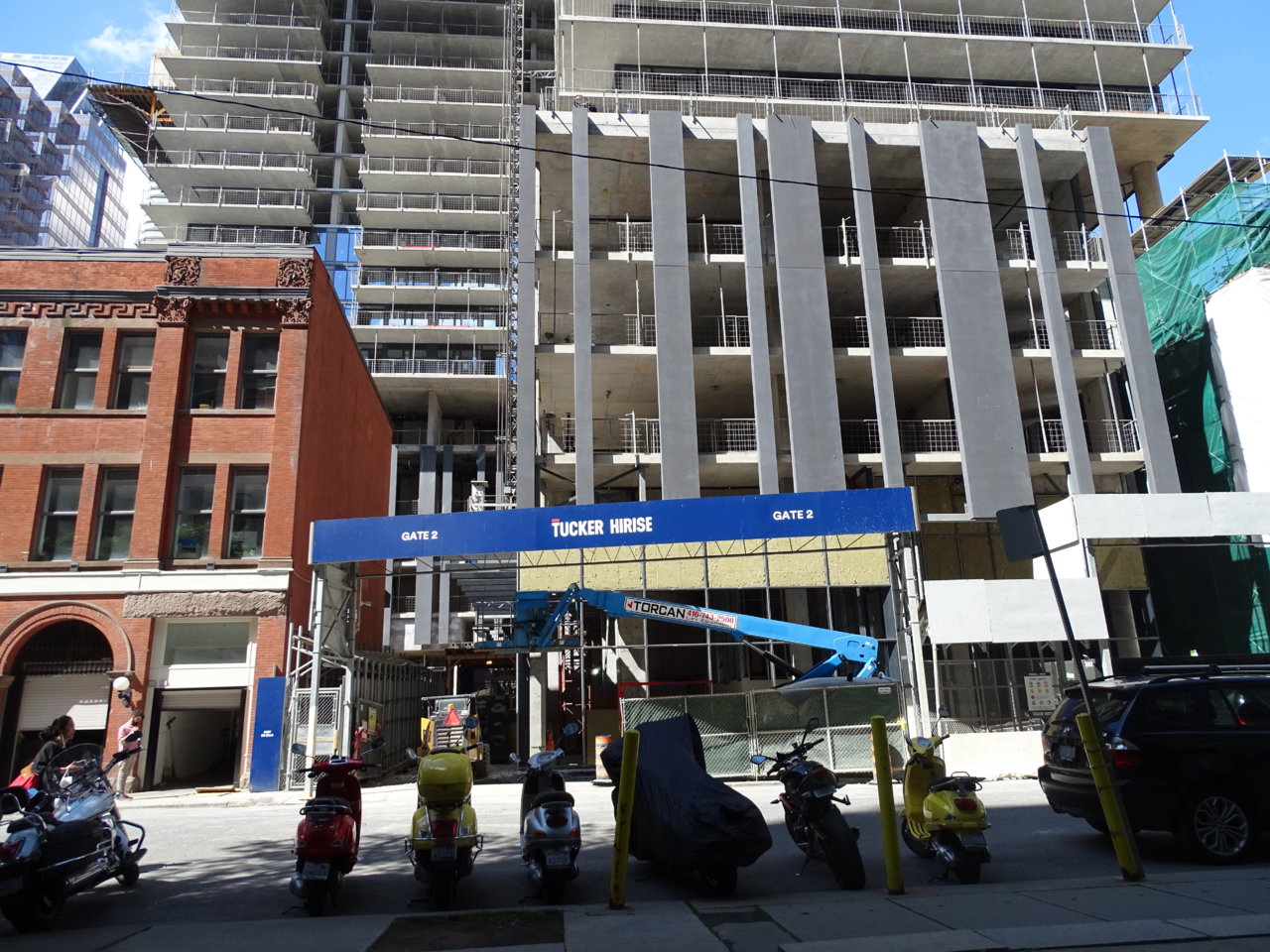 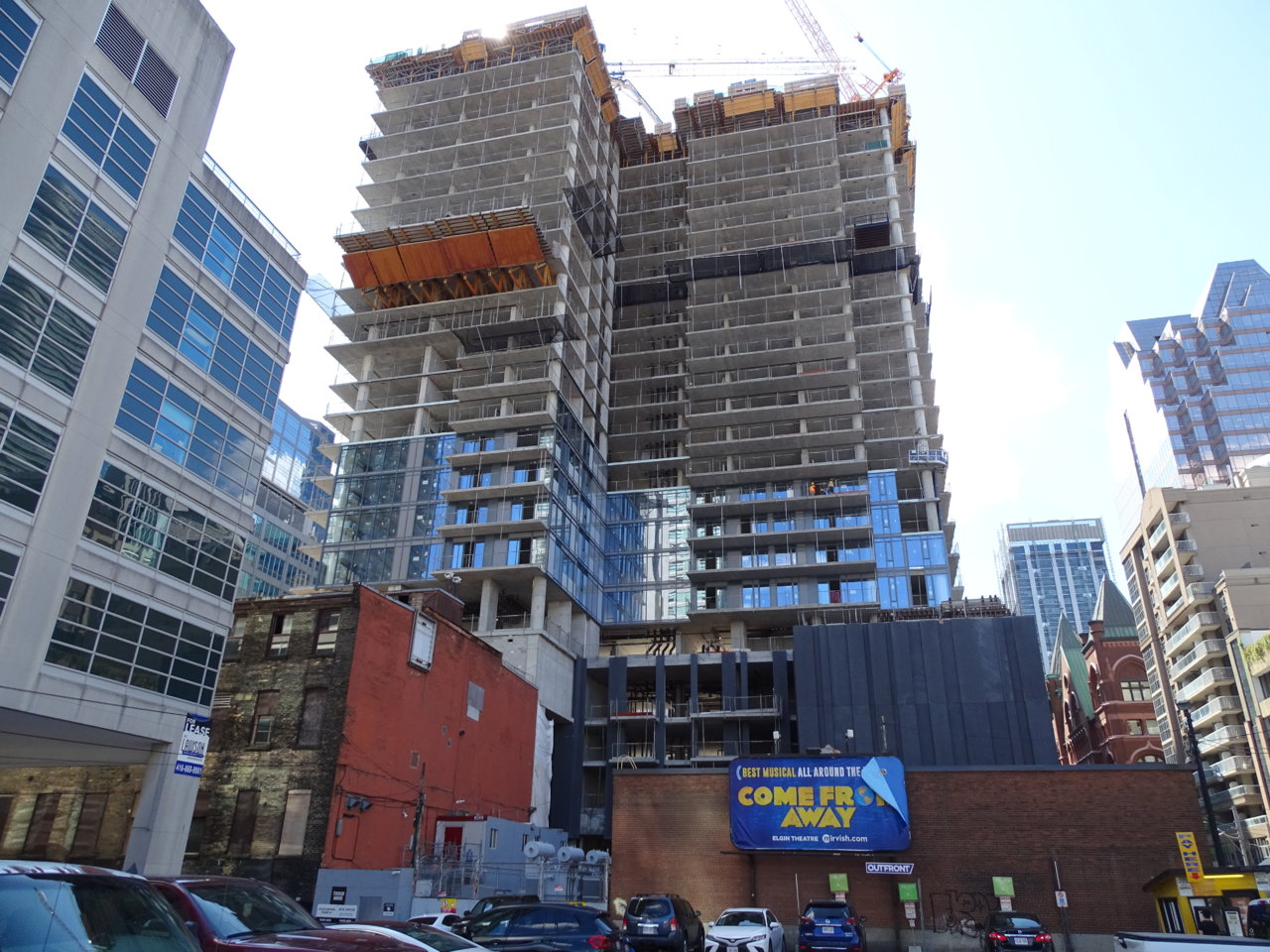 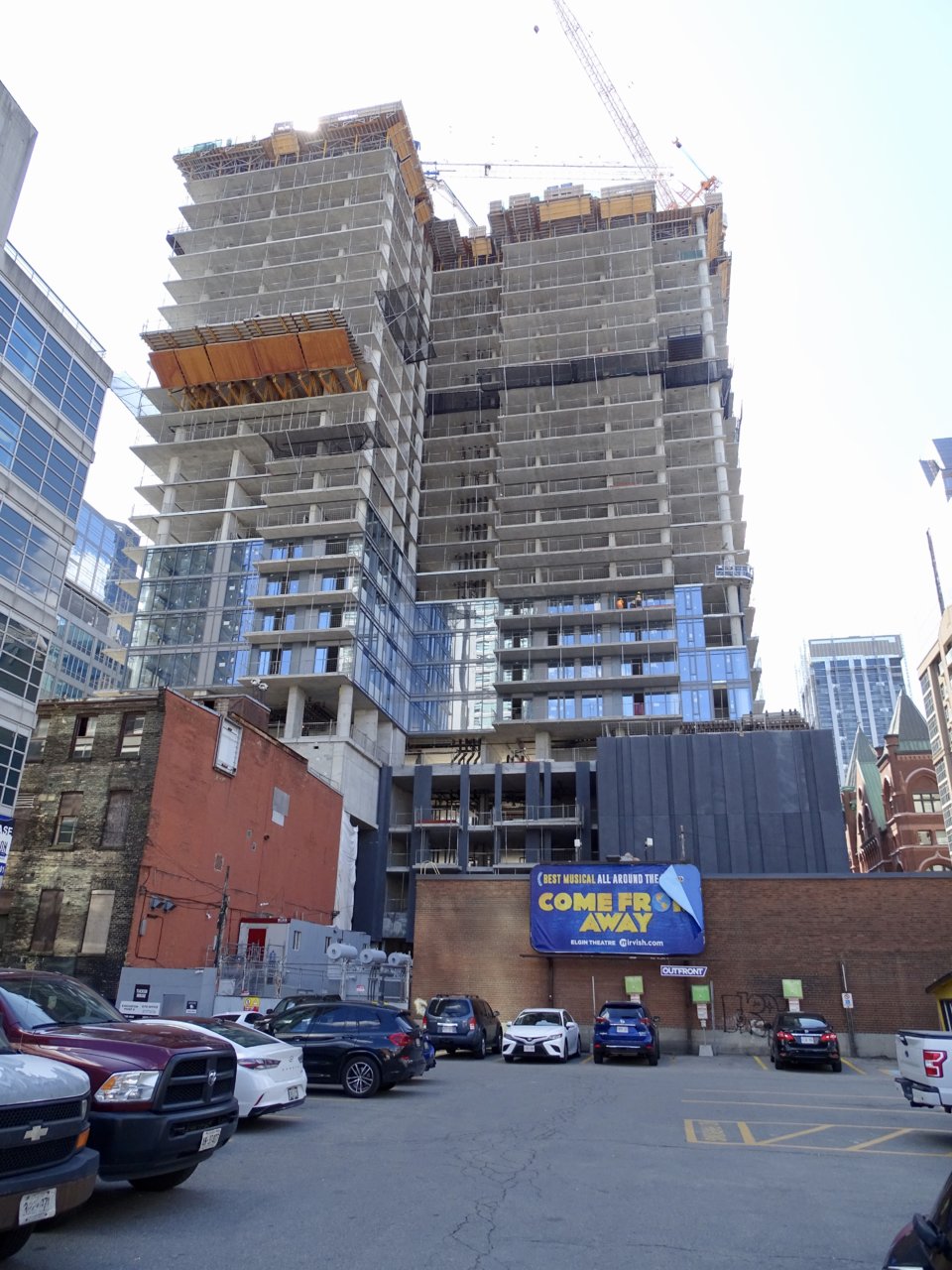 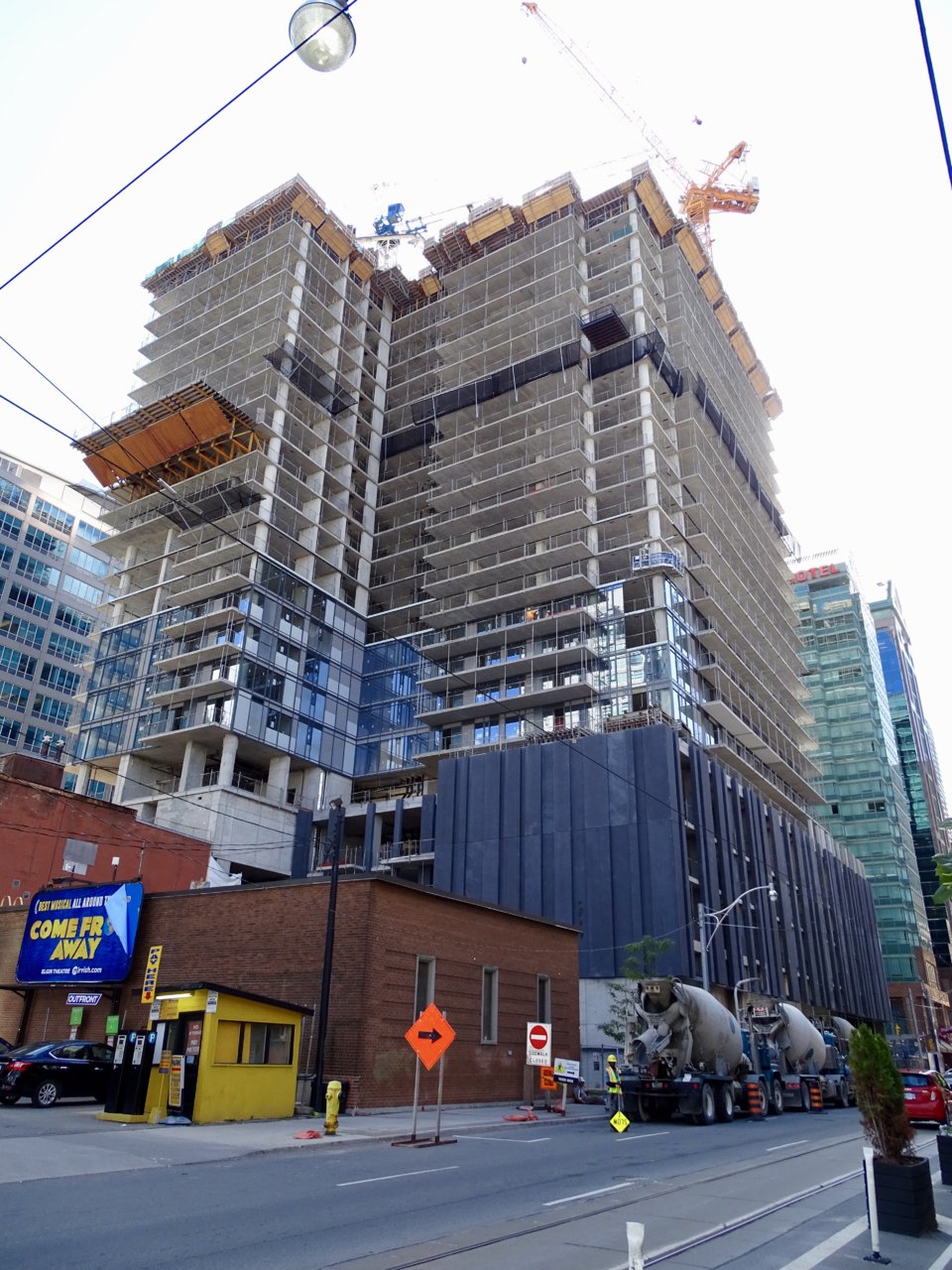 Location
The flashes from Yonge Dundas Square blind me

Today. My view gets more and more complex. 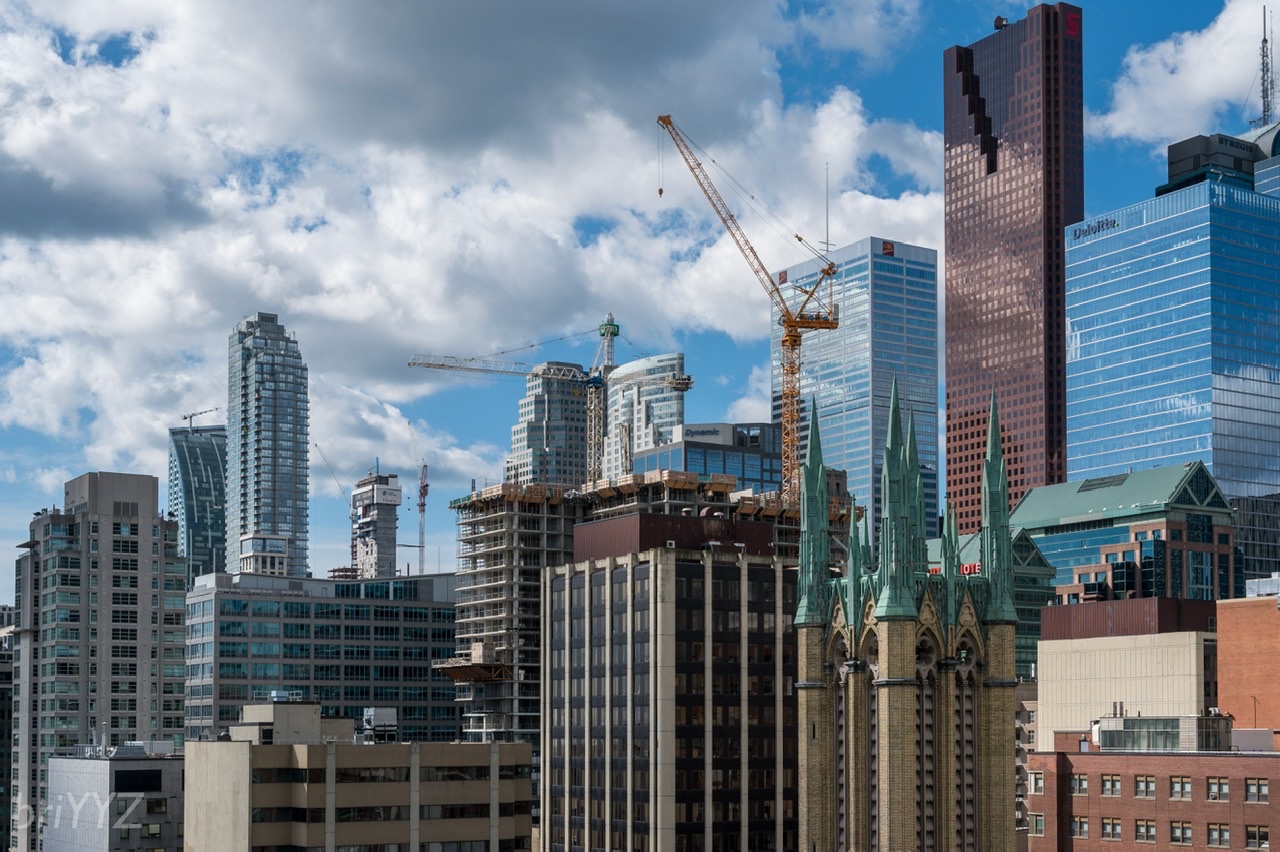