The third best skyline in this hemisphere needs a supertall (minus CN tower)
Click to expand...

We've had one since 1975 it's called the First Canadian Place. If you're still not convinced, here's what i consider proof:

Take note that the building on the right which is The New York Times Building Is somehow considered a supertall on Wikipedia but as you can clearly see this couldn't possibly be true and get this, the roof height of the building is 227.4 m, that's right it doesn't even reach 240 meters which is 10 meters underneath 250 meters while the first canadian place not only reaches 290 meters but it's over 295 meters tall! not to mention atop that there's an even thicker antenna reaching over 350 meters.

But let me illustrate to everyone my new decision. In trade for no longer including spires as official height there will now be a 10 meter allow limit for buildings 10 meters short of 300 meters. All buildings 290 meters or more now round up and are considered Supertalls! But spires are left out because they are indeferenchiadable from antennas and don't realistically make a building any taller except for maybe the odd very thick spire which are very uncommon...(Actually One small example of this is the Empire state buildings spire which counts because it's bulk size and habitable floors making is a 381 m tall building) From the eyes point of view 98% on average of people see a building with a higher roof height as taller than those with a higher height with spires/antennas.

Behold!! This is just North America and the West:

I am Coining this new SuperTall logic as of today, January 6th 2019 as I feel strongly that the dirty Rich Corporate industry cannot be trustworthy valid deciders of what the Official height of a building should be because I know this for sure for more reasons than i could ever type in this post. But most of all I know how the dirty rich mindstate works and i can tell you one thing, we the people are capable of making better decisions than they are! The suit people will never even overlook what official height is because well... they're busy making money and doing business. 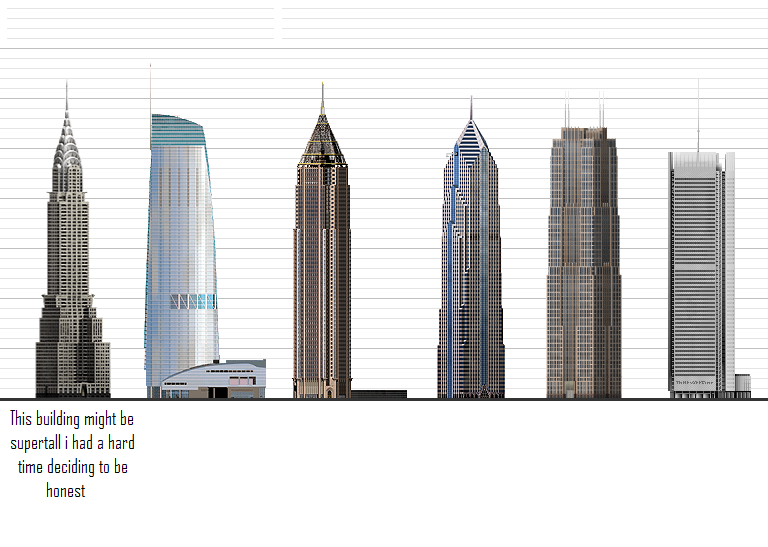 As for these.... I'll admit the Chrysler building comes close i'm not sure whether it's supertall since it's roofspire comes close

Here's a comparison that i thought i should note to:

Ok ok so i can't make something official but all we needed was common sense. what do you guys think of my new idea?
Last edited: Jan 8, 2019

dude ive seen your diagrams on SSP, didn't know you were from T. nice work!
RESPECT- NOT FOR EVERYONE

Hey thanks, i'm thinking of getting back into drawing, any building drawing requests?

^that's a great news. don't really have any drawing requests, I will think of some and let you know.
RESPECT- NOT FOR EVERYONE
F

I don't know anything about this building or its owner, but it's very rare for a project to be cancelled at this late stage: after completing excavation and cranes being installed. This is because the construction lenders would never loan the money unless they had a near guarantee they'll be repaid when the building is complete. Part of the underwriting for the loan includes a review of market studies and an analysis of other non-public documents. The developer may be shopping around for better financing terms to increase profit.

I have it from reliable sources that there is reason to be optimistic that this will be built. Can't go into detail beyond that.

The fact that it's under construction has me tending to think it will be built.
T

Reliable sources tell me that there IS a reason to be optimistic this will get built.

WiddleBittyKitty said:
The fact that it's under construction has me tending to think it will be built.
Click to expand...

To be clear, I believe that this will be built. But when looking at The Stump, we must all take a moment of silence.
J

To be clear, I believe that this will be built. But when looking at The Stump, we must all take a moment of silence.
Click to expand...

It think this was before my time in the city. What was the name of this (other than 'the stump') so I can do some digging and find out more on it? Thanks!

Jago88 said:
It think this was before my time in the city. What was the name of this (other than 'the stump') so I can do some digging and find out more on it? Thanks!
Click to expand...

This intentionally vague statement can easily be interpreted to imply a change in ownership or control of the project.

Not that I’m suggesting it personally. I have no knowledge of the situation beyond what I read here.

No he isn't. It is just that the majority of contributors on this thread have let their sheer desire of this being built overpower the financial facts that weigh very heavily on Mizrahi. Either that or majority are simply uninformed about how bridge financing works and the stress it bears every single day as interest is applied per diem. Look it is not to say that he probably has some backing and support for the interest but unless he starts to see traction in sales SOON it is a simple fact that interest will eventually overpower finances backing and it will be simply unaffordable to proceed or deemed unprofitable to continue. I can tell you right now that things like mandatory valet service and start prices because they wanted to constrain this building to 416 luxury suites starting at $2MM+ are the two main contributing factors to lack of sales. The market has shifted and everyone is treading with caution. The timing of this strategy was bad, if it was 2016/17 they were selling it might of been a slightly different story. We shall see, in the end this is nothing but speculation on both sides as we do not know the inner workings of Mizrahi's finances. Time will tell.

It's fairly obvious that you have some kind of grudge against him - given this kind of accusation (libelous??) in another thread


Kingscourt said:
It is pretty obvious to me that there was collusion here. How ironic that both this and Mizrahi's the ONE were overlapping in approvals and Mizrahi was advertising his to be the tallest residential in Canada once built. Considering his shady history do you really not think it's obvious he paid some council members to deny the height on this one? Giving Mizrahi's the ONE to be the only supertall residential status and the glory of that for both marketing and his ego?
Click to expand...