The nuclear power projects I know of didn't take that much time to wait for a public hearing...
M

If it takes five day for all parties to have a say than it's good five days have been scheduled. I'm not too keen on you implication that this should be rushed being of lesser importance than a nuclear power project.
got some ice to sell you

There is a lot of prep involved in such a hearing, but surely that much time is not required.

That's a pretty typical length for an OMB hearing. I took part in a two-week long hearing a few years ago.

E-Decision is now posted on the OMB website. The City has effectively accepted a settlement offer made by Sentinel. Currently, the City and Sentinel are in the process of working out the finer details of the development proposal and the final form of the ZBA/Site Plan. The details of the settlement have now been made public from the Jan 31 2017 meeting of City Council.

"City Council instruct the City Solicitor and any other appropriate City staff to attend the Ontario Municipal Board Hearing for 215-229 Church Street in support of such appeal as revised in accordance with the settlement offer from the proponent's solicitor David Bronskill, dated September 8, 2016, attached as Confidential Appendix A to the report (January 31, 2017) from the City Solicitor, including revised plans satisfactory to the Chief Planner...and as further revised as follows: to limit the height of such building to a maximum of 52 storeys together with the related reduction in metres, to increase the Section 37 contribution to $3.1 Million Dollars to be used for capital improvements ... and to resolve the deployment and design of balconies through the submission of the balcony design to the Design Review Committee at the site plan approval stage."

Full details of the settlement offer can be found by using the Appendix A link.

Thanks for catching that @ottbike.

So, here's a bit of a summary:
That height is not final, but it could be used until such time as we get the Site Plan Application documents.

Apply for 46 and settle for 52? Not sure how that makes sense.

Yup, first time I've run into that too, but nearby approvals were going that much higher, so they went for it!

Which ones were going higher? The Jarvis-Church stretch are all sub-50 I thought?

I wonder if they got the floorplates under 750 as a compromise at least.
T

interchange42 said:
Yup, first time I've run into that too, but nearby approvals were going that much higher, so they went for it!

not the first time it has happened

yes, height isn't always an issue. The city often trades extra floors for increased tower setbacks and whatnot to not impact developable GFA.

interchange42 said:
Thanks for catching that @ottbike.

So, here's a bit of a summary:
That height is not final, but it could be used until such time as we get the Site Plan Application documents.

@interchange42 Maybe, at least once it gets a database file I can link to

Rendering from the Dev App site: 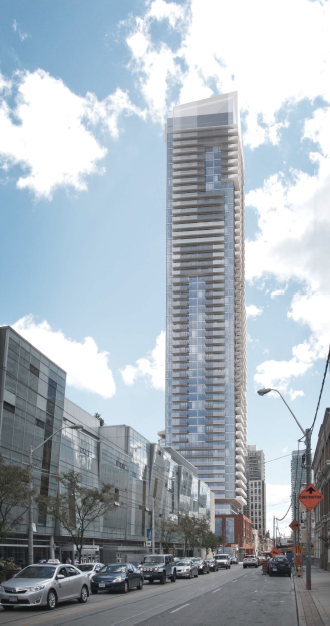