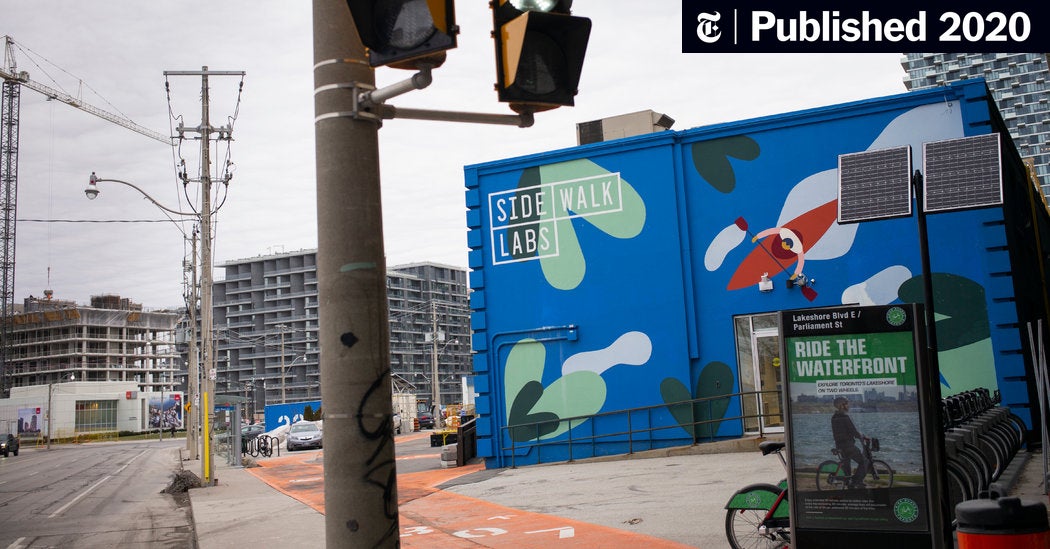 You Can’t Fight City Hall. But Maybe You Can Fight Google. (Published 2020)

Faced with an array of opponents for its sensor-laden city of tomorrow in Toronto, a Google sibling has drastically dialed back plans. The critics now want the tech giant to quit altogether.

No comment on the article itself, but there's some shoddy fact checking in there:

Long abandoned, the land features an old grain elevator, a gravel parking lot and an emergency shelter for the homeless.
Click to expand...

I assume the "old grain elevator" is the Victory Soya Mills silos, which a quick search could have confirmed are not part of the site.

Anyone else notice the irony in Sidewalk's cancellation of heated Sidewalks... one of the sleight of hand goodies to mitigate data collection discussions. Sorry but some things in this epic debate hit my funny-bone.
Thank you UT photographers.
LINK: Future SKYLINE render (updated November 8, 2020)

havent seen it before. Project is dead - https://medium.com/sidewalk-talk/wh...nd-what-s-next-for-sidewalk-labs-9a61de3fee3a
"Achievement is largely the product of steadily raising one's levels of aspiration and expectation" - Jack Nicklaus The CEO of Google’s sister company Sidewalk Labs said global economic upheaval and uncertainty over Toronto’s real estate market was responsible for i...

Sad, i guess others are happy
P

another. Great proposal bites the dust and joins the “could have beens” Collection.

Yeah, not at all. This is good news. They wanted everything and weren't willing to take part in the process. Behind the scenes, they were even worse 'advocates' for their scheme than they were publicly.
Twitter
A

There's also nothing to say that whatever eventually winds up getting built here isn't as good as (or better than) what Sidewalk had proposed.

History will likely repeat itself with the same old mediocre cut and paste. Sidewalk Labs gave Toronto a chance to actually rise up to the city it deserves to be. This likely also means the timelines to see this land develop will also increase (even more so due to COVID-19).

Yeah sure, but it also does not mean that whatever winds up down there won't eventually look like everything else ...pretty ehh??
W

I knew to not let my judgement be swayed by pretty Danish renderings. They just wanted free government dollars and when it was clear this was not going to happen, they pulled out.

We are better for this. Housing is not some technology where we can allow venture capital tech innovators to pull out at any moment, leaving people vulnerable and government having to pick up the costs of a proprietary neighbourhood.

I know many people just want good architecture (which realistically will be lacking given what has been proposed and built elsewhere on the Waterfront), but there were many severe problems with this proposal, from governance structure of the proposal and respect for our civic institutions, to data collection and privacy.

The one thing I am grateful for though is that this project has hopefully built up our capacity as a city and public to ask the right questions and adequately respond to future proposals from the Googles and Amazons of the world. They may offer themselves as partners, but they certainly don't see us as equal.
T

No company will invest money without getting something in return that's just the way the world works.
A

TheSix said:
Sidewalk Labs gave Toronto a chance to actually rise up to the city it deserves to be.
Click to expand...

But did they, really? They made big promises that were, it turns out, not financially feasible (as many had predicted), without the City bending over backwards to their unreasonable demands. By that measure, any entity could say "we're going to give you the world and here's what it looks like and it's designed by Heatherwick" whilst having no practical plan to implement it, but you can't really lose something that was never going to actually happen.


TheSix said:
This likely also means the timelines to see this land develop will also increase (even more so due to COVID-19).
Click to expand...

I don't know if it necessarily does, significantly -- Sidewalk and WT were still already going to have to issue an RFP to find a developer to actually build the thing, so there was to be an RFP process this year regardless (setting aside Covid-generated uncertainty around timing). If WT is smart they'll just take the positive aspects of what Sidewalk had proposed, edit out the problematic stuff, and issue an RFP for a real development partner anyway, as was going to happen in a Sidewalk world, anyway.