Calgary is kicking our ass when it comes to architecture. Never thought I'd be saying that.
...
Y

interchange42 said:
First of all, it doesn't look top heavy to me, but…

I don't understand how you can look at a design that is meant to 'break all the rules,' and then seriously declare 'well, it would work better if it followed this rule.' If it did, then it wouldn't be River City 3, it would be Yegger City 3, which breaks all rules except one chosen arbitrarily.

The deal with buildings of this nature is that they are meant to look like they shouldn't be the way they are, and removing the elements that provoke would only water them down. Take away the odd massing here and you remove a major element of what makes River City 3, River City 3.

It's fair for me to make a comment about how the look of the building could be improved upon. "Breaking rules" isn't a get out of jail free card, especially when the excuse is that the building is "meant to break all the rules".

Also, you are making a pretty large assumption regarding the building's massing being "meant to provoke". Yes, the protruding sections are interesting but the more likely explanation that the building is boxy and heavy on top (which is what my issue is) is to maximize the floorplate / sellable area.

Let's not get carried away here, this building, while nice, lacks the grace of Telus Sky and the striking engineering of Vancouver House.

Sure it's fair for you to comment, and it's fair for someone to respond that you have totally missed the point of the design of River City 3.

The building is not meant to be graceful at all, so of course it lacks the grace of Telus Sky. It does, however, boast striking engineering, even if it doesn't match the degree to which Vancouver House does… but they aren't going for the look of either of those here.

River City 3 is meant to provoke: that's not 'a pretty large assumption,' that's a given: look at it. Of course any developer wants to be able to sell more suites, but if that were the only reason for this building being 'heavy on top,' which it is not particularly, then it would just be a box that gets bigger up top. This building is intentionally avant garde, and yes, it breaks aesthetic rules, and no, making it lighter up top would not objectively make it any better: it does what it's meant to the way it is now (or will be when it's finished).

You keep talking about the "intent" of River City 3 and about the building "meaning to" do this or do that. I don't care about the intent, I care about the final product, which in my mind could use some refinement. Refinement which by the way would not compromise said claim about its "intent to provoke". I fail to see how you think the top heavy-ness is what makes this building stand out.

Telus Sky is beautiful, sure, but it’s not without its own goofy angles. 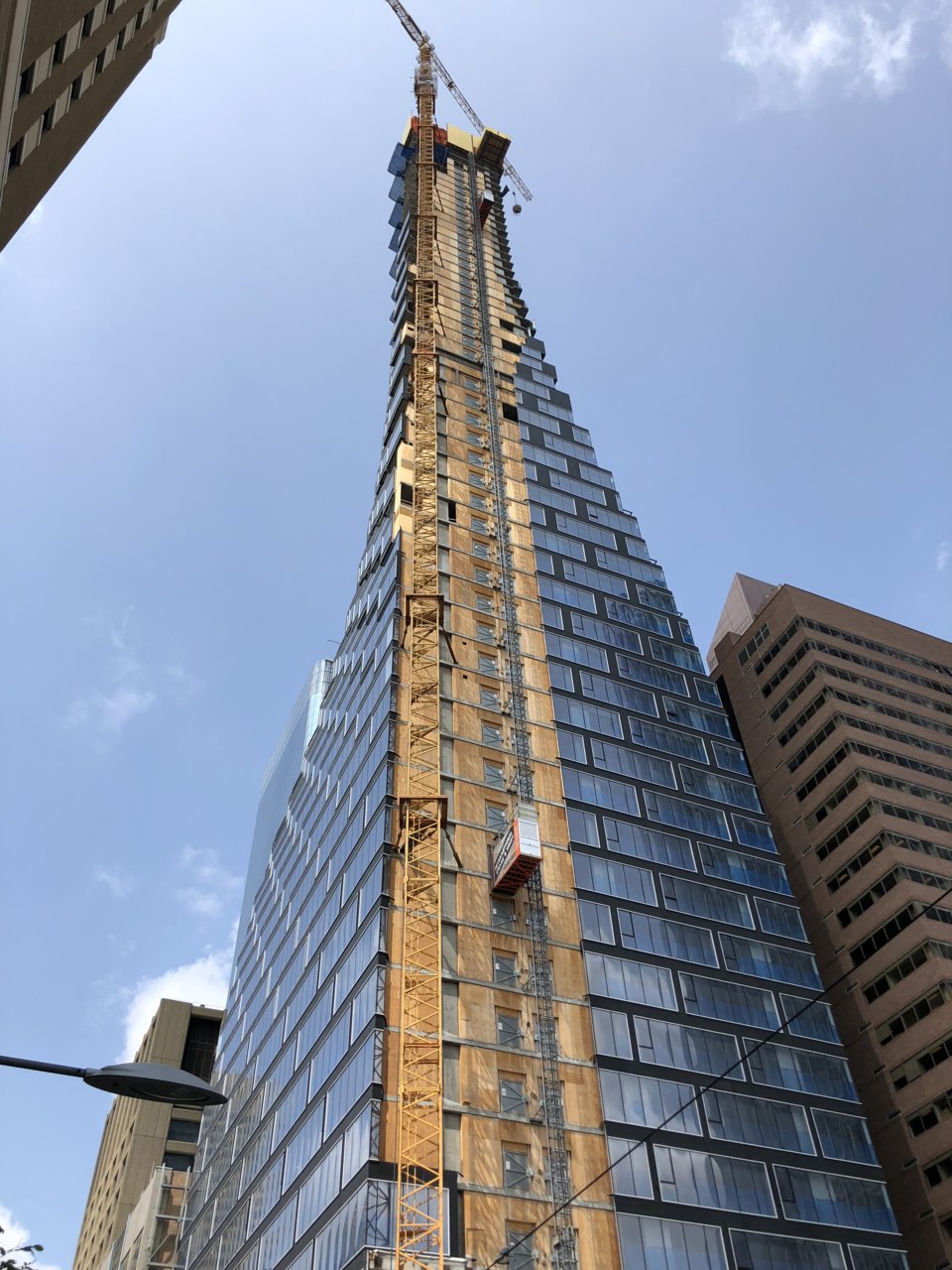 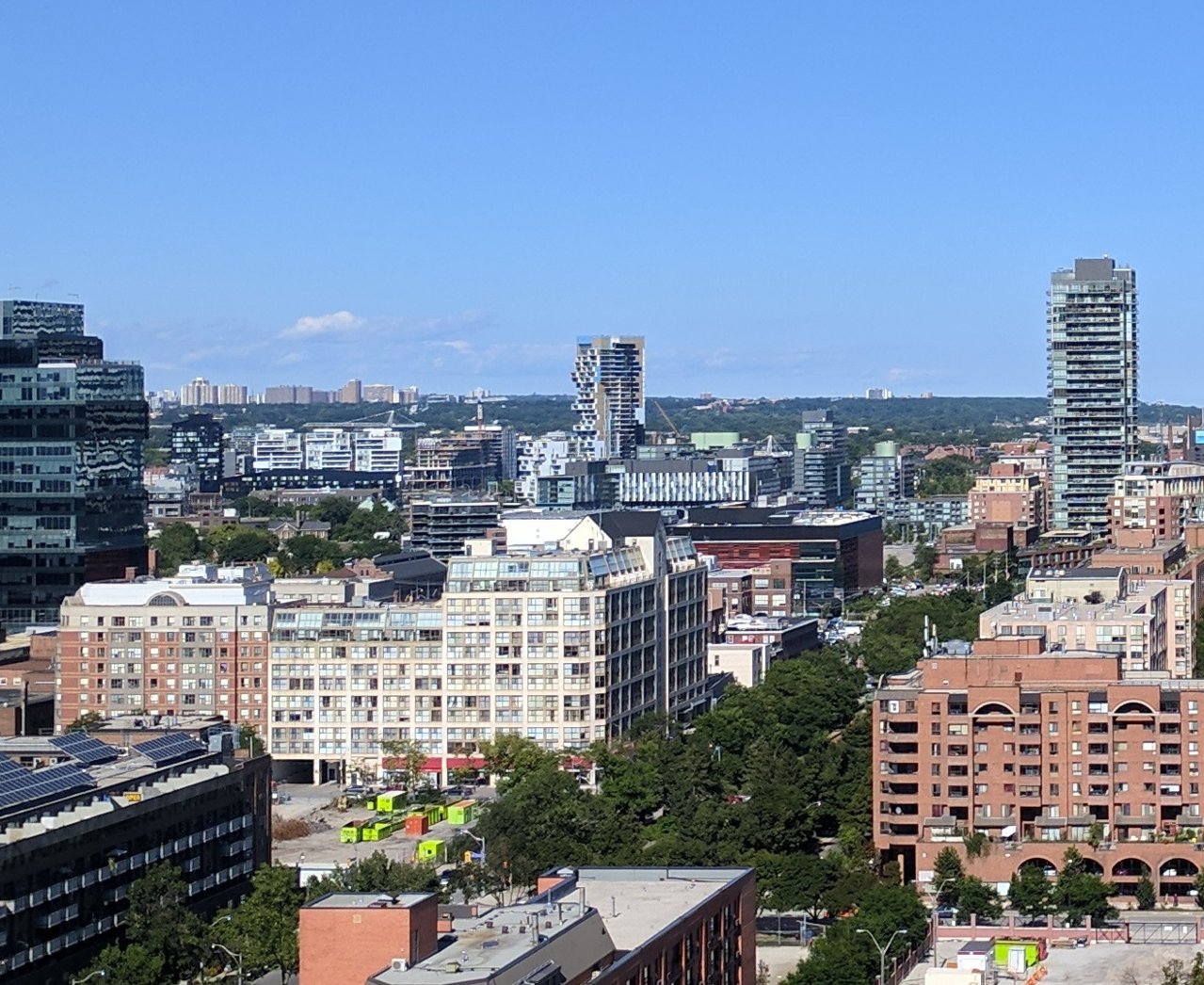 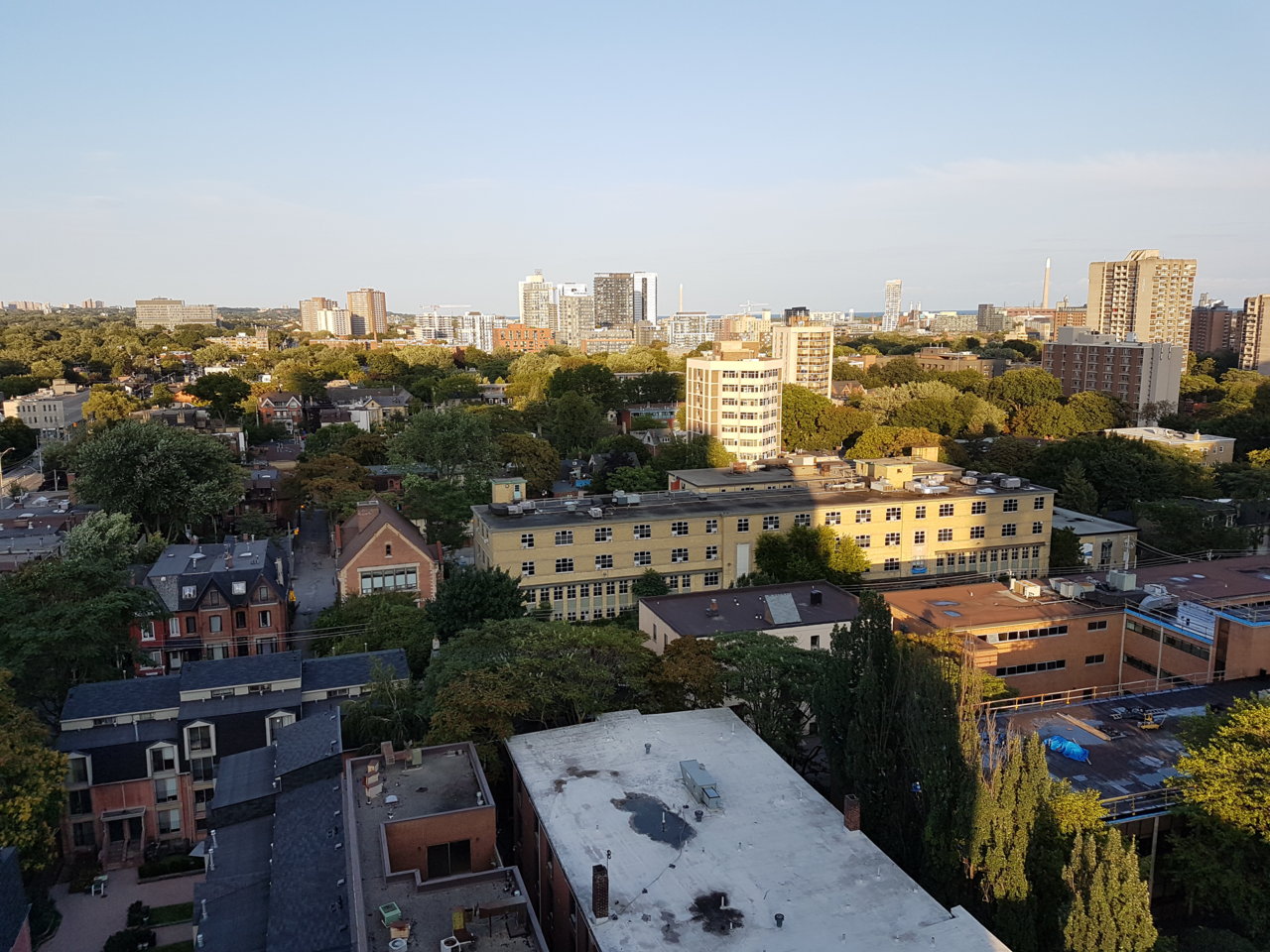 Several teams working on those fab drawer treatments...nice to see them shift from the lower sweater and pant drawers into the sock and underwear ones. 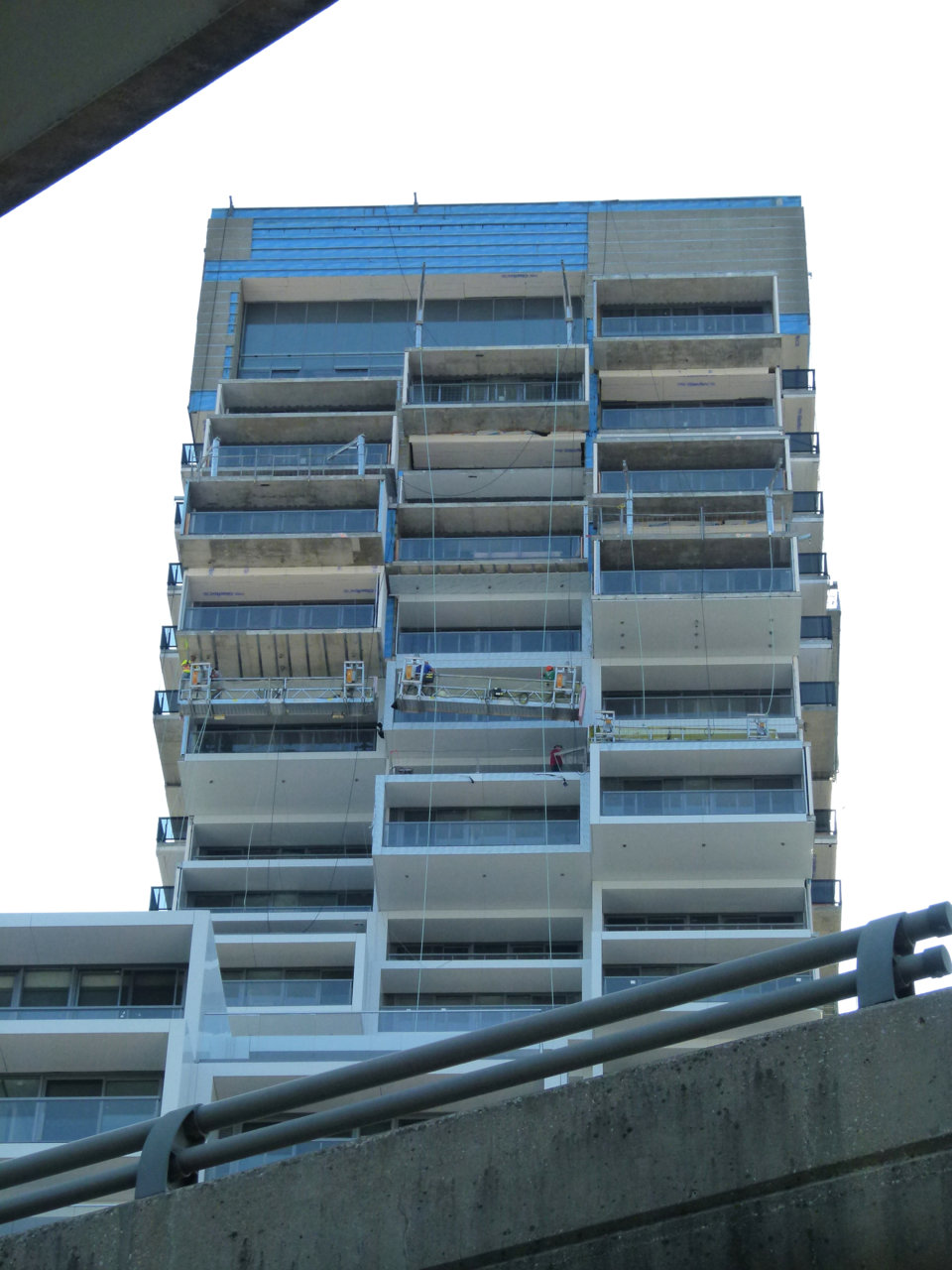 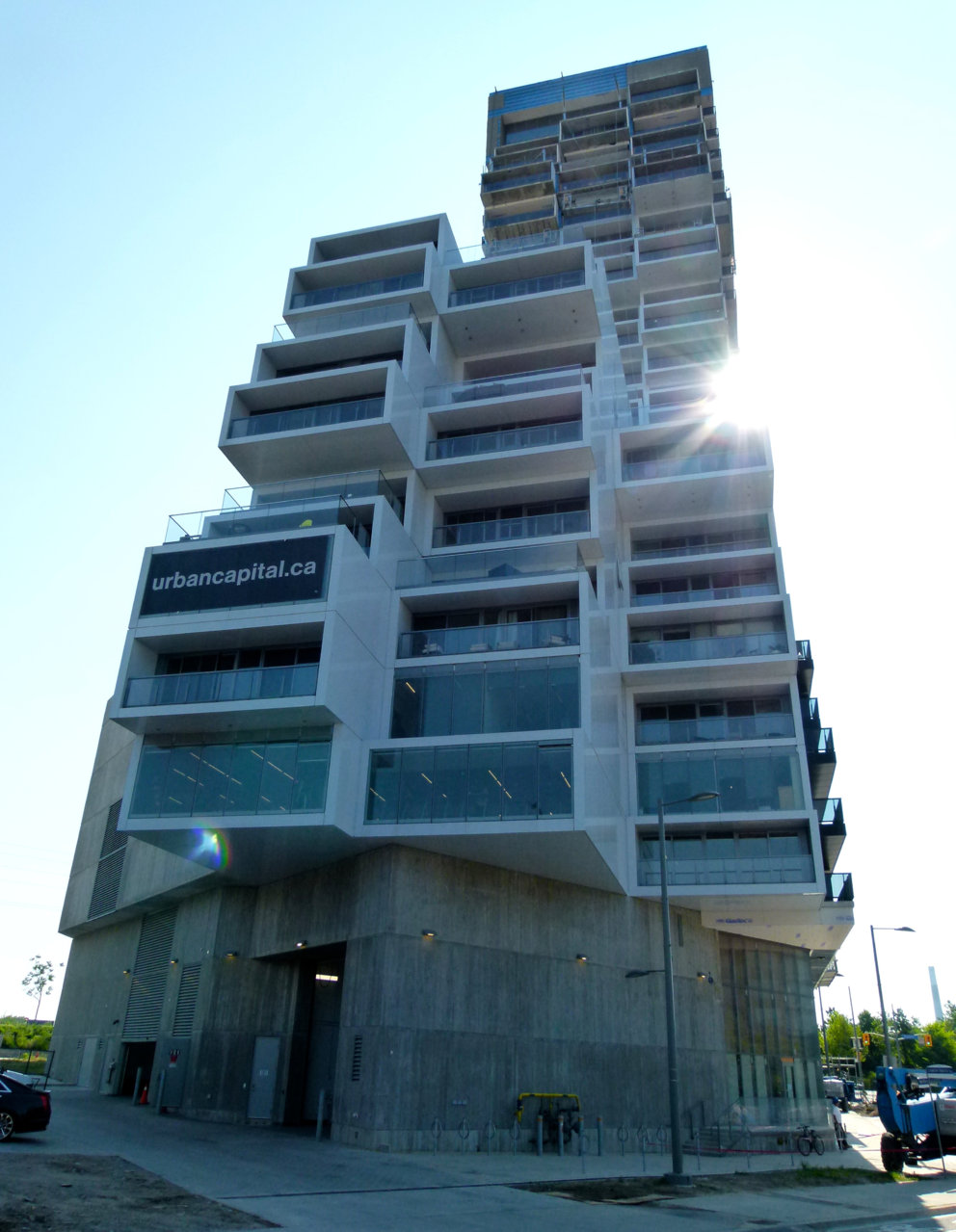 Several athletic types were in the gym/s (in the streaked lighting lowest drawers). 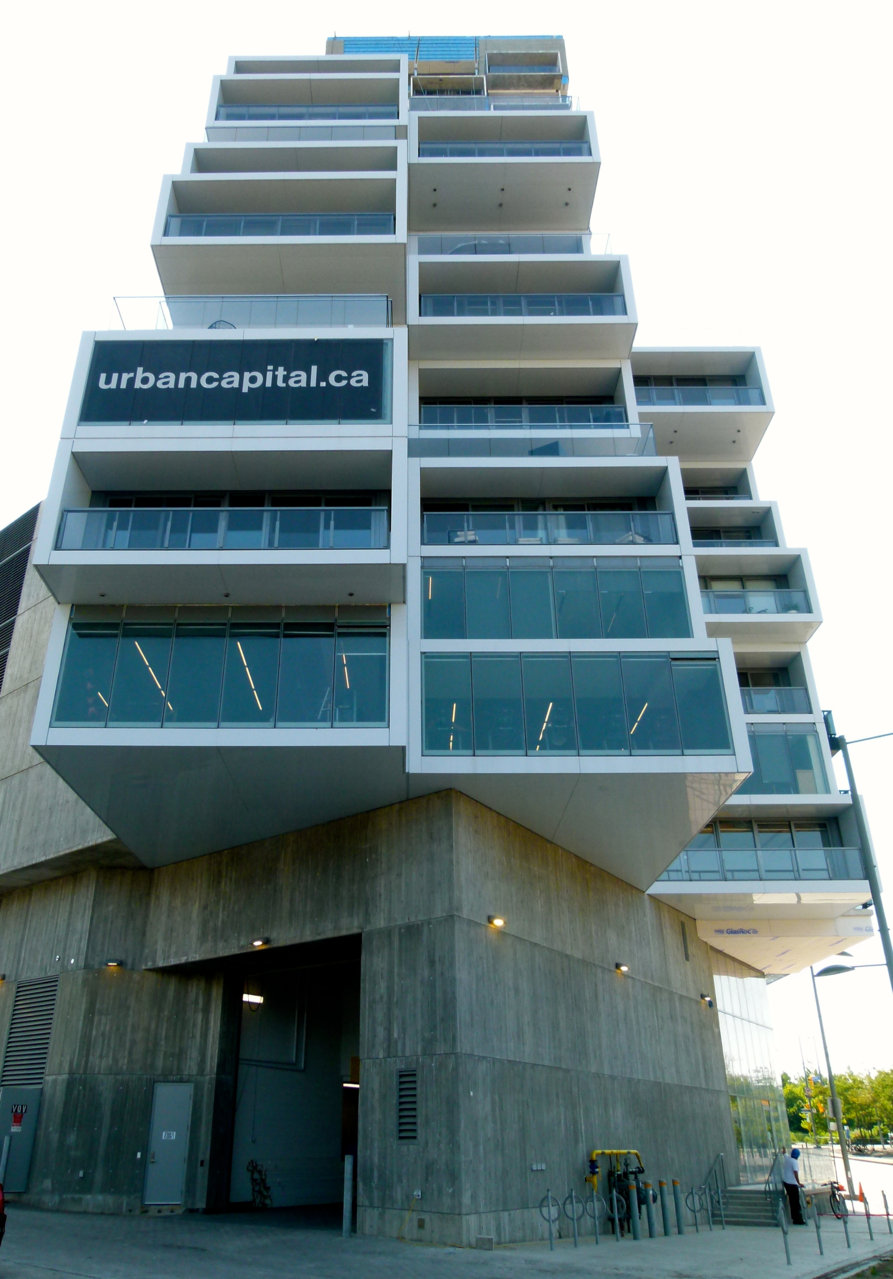 A long slow climb upwards...(those two small orange rollers are the only things keeping this from scratching the glass all the way up!). 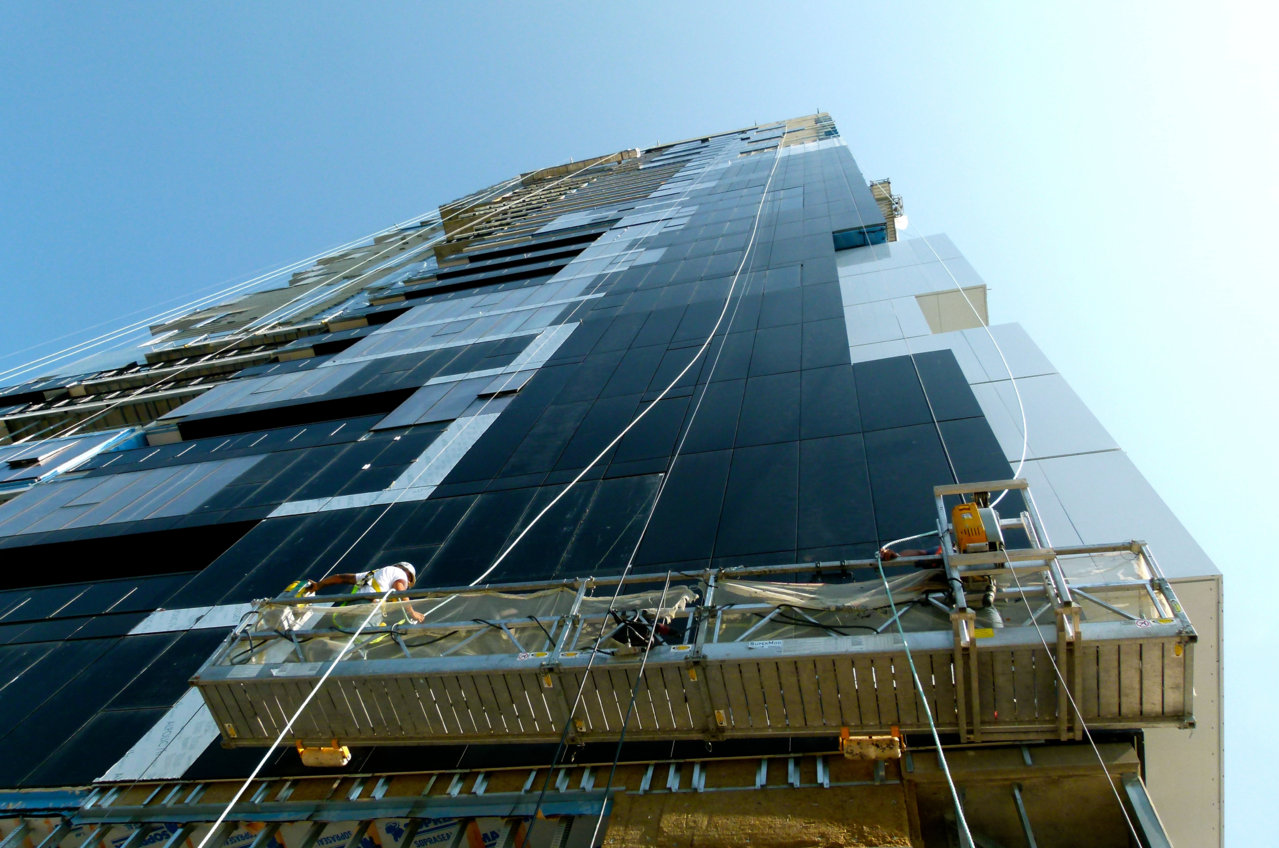 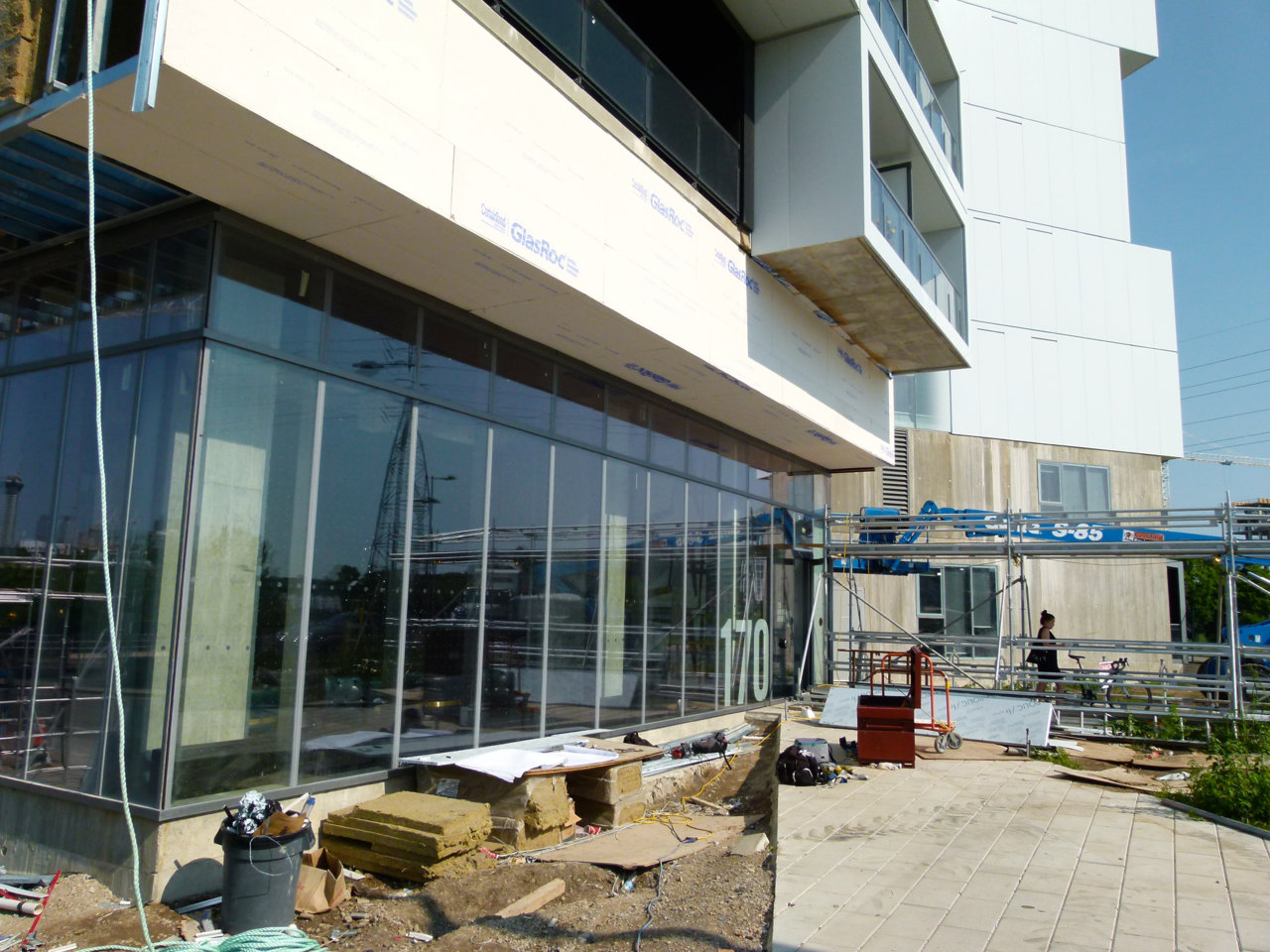 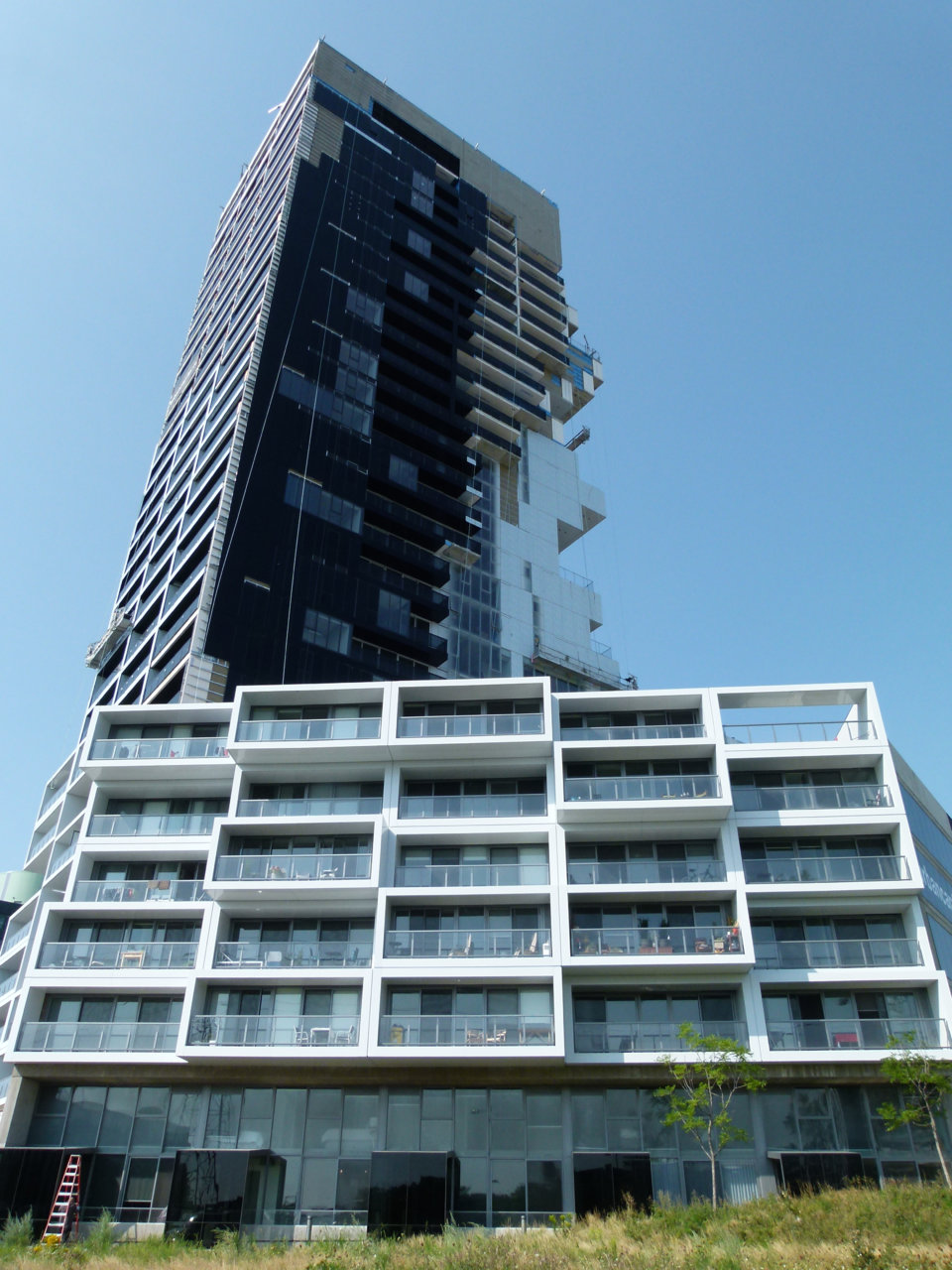 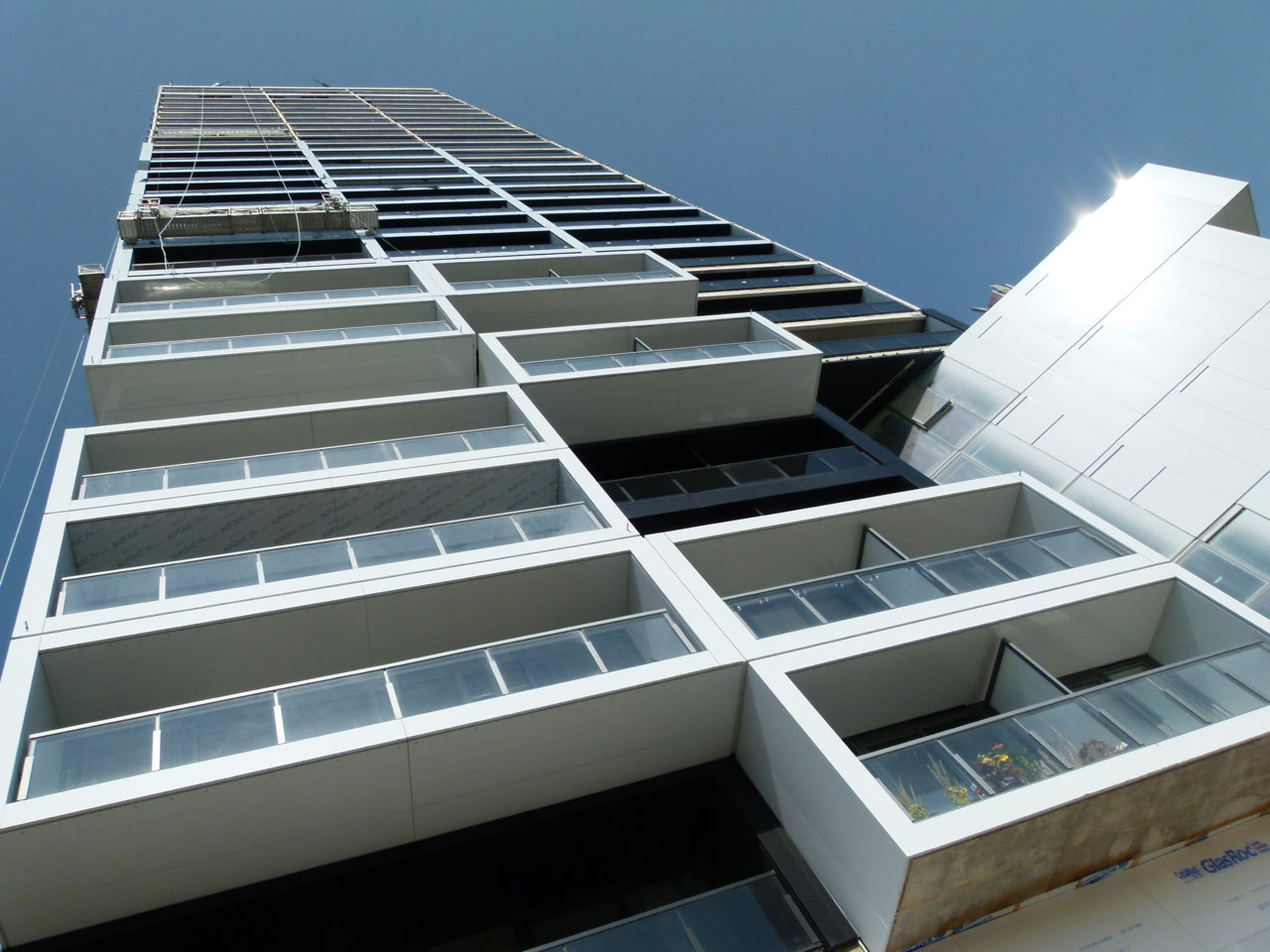 Love the clean articulation between some of these drawers, such as spacing between the white balconies near the centre of this photo... 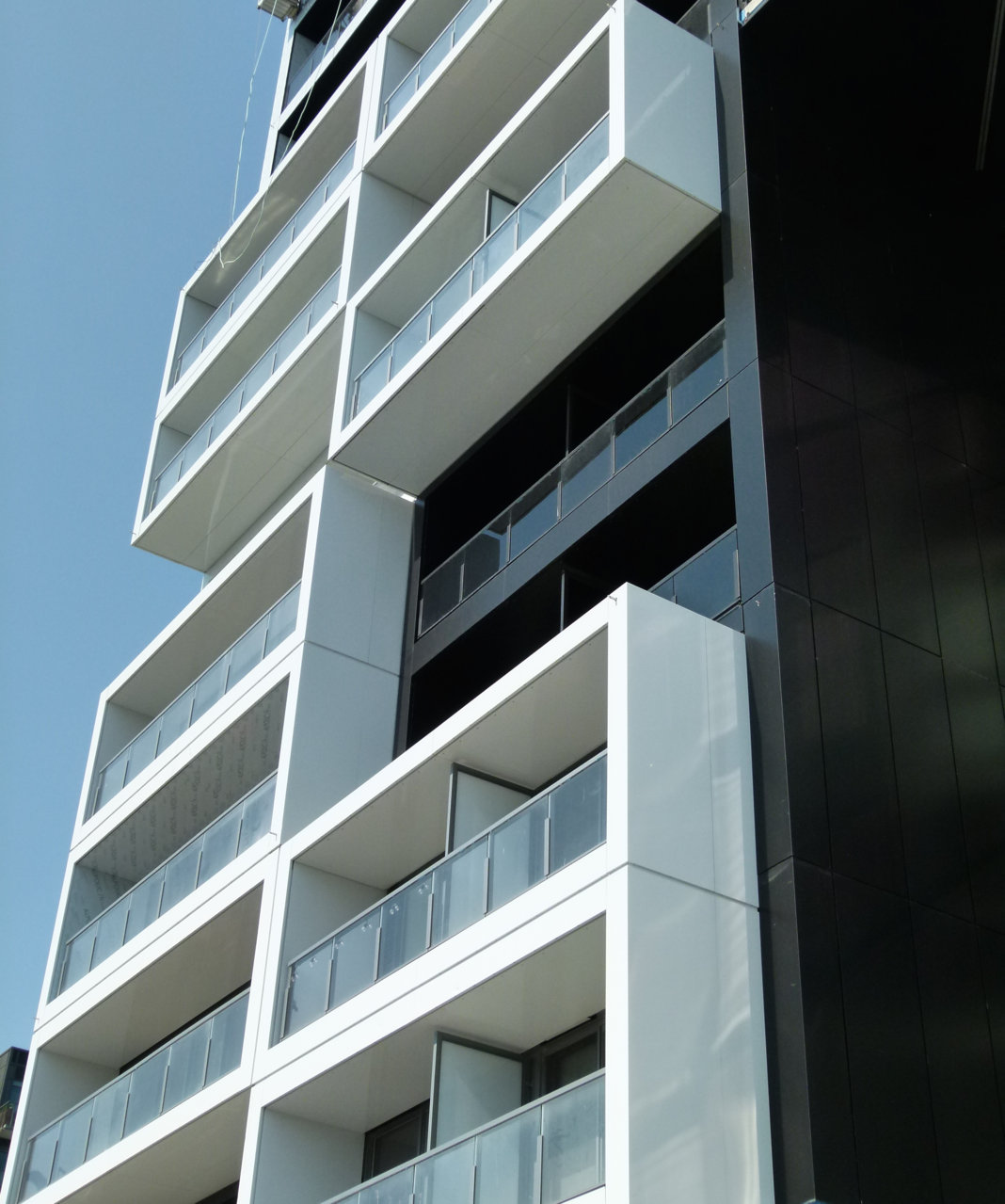 The black nook next to the white nook finally complete on south side. 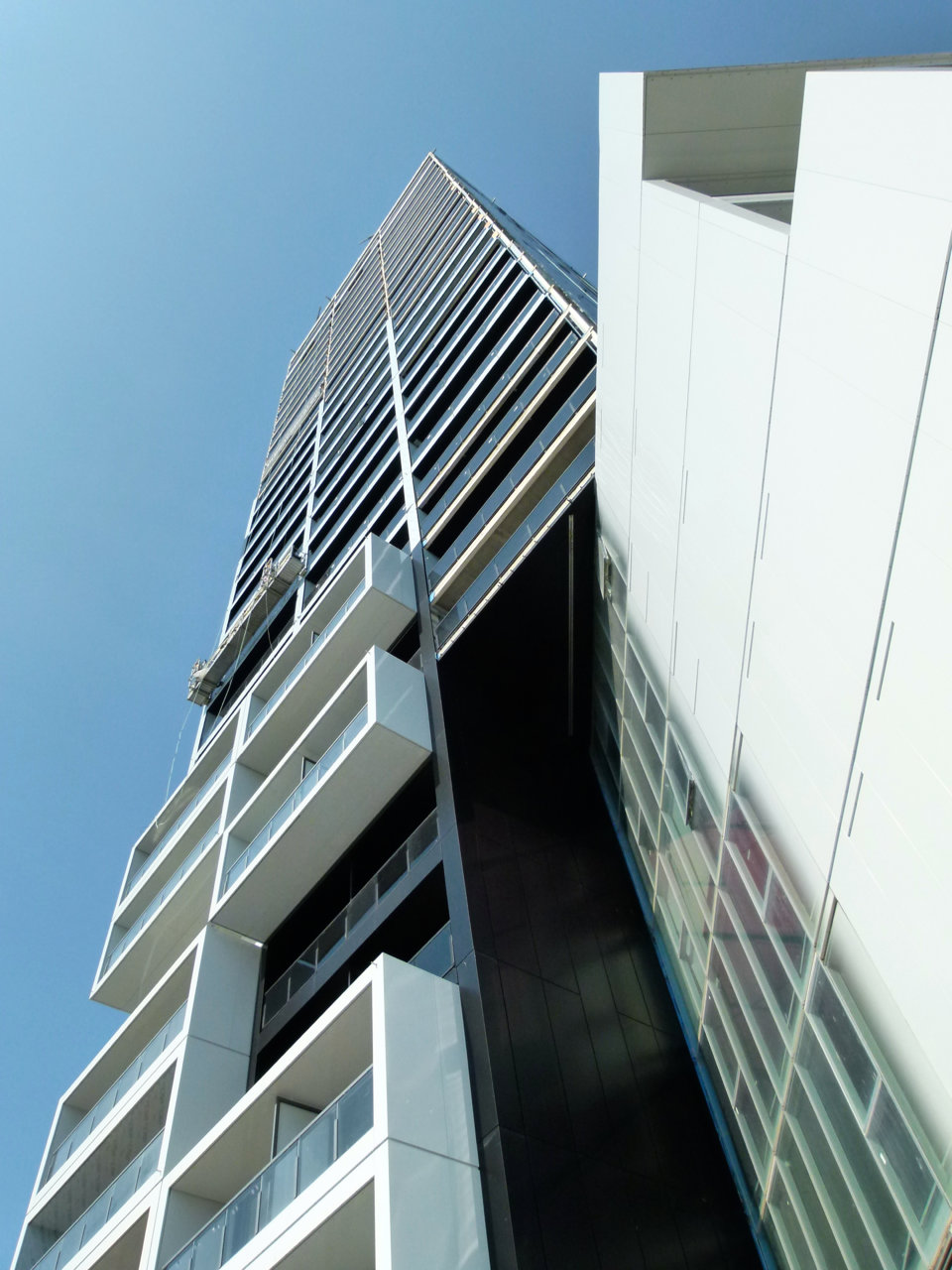 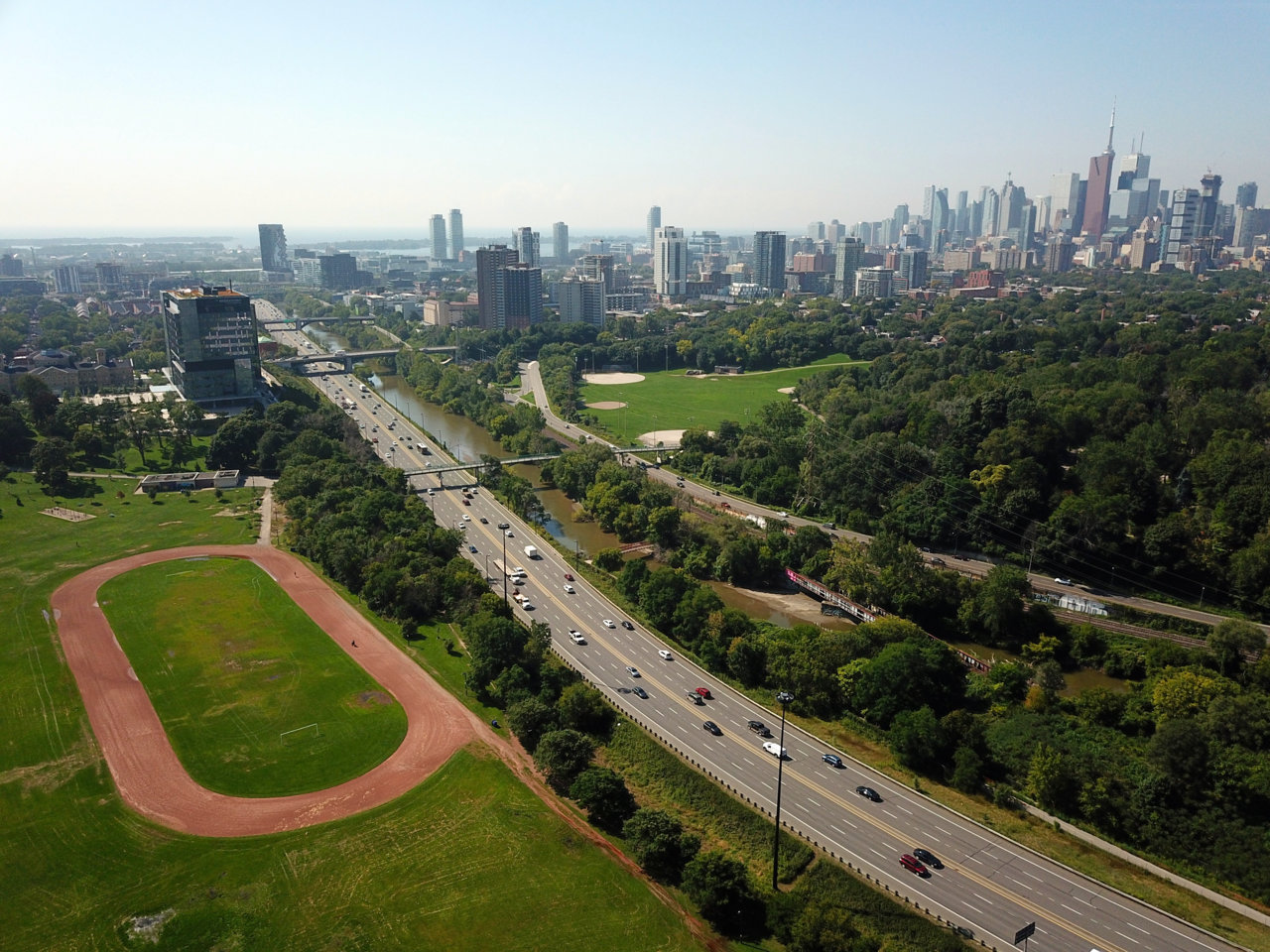 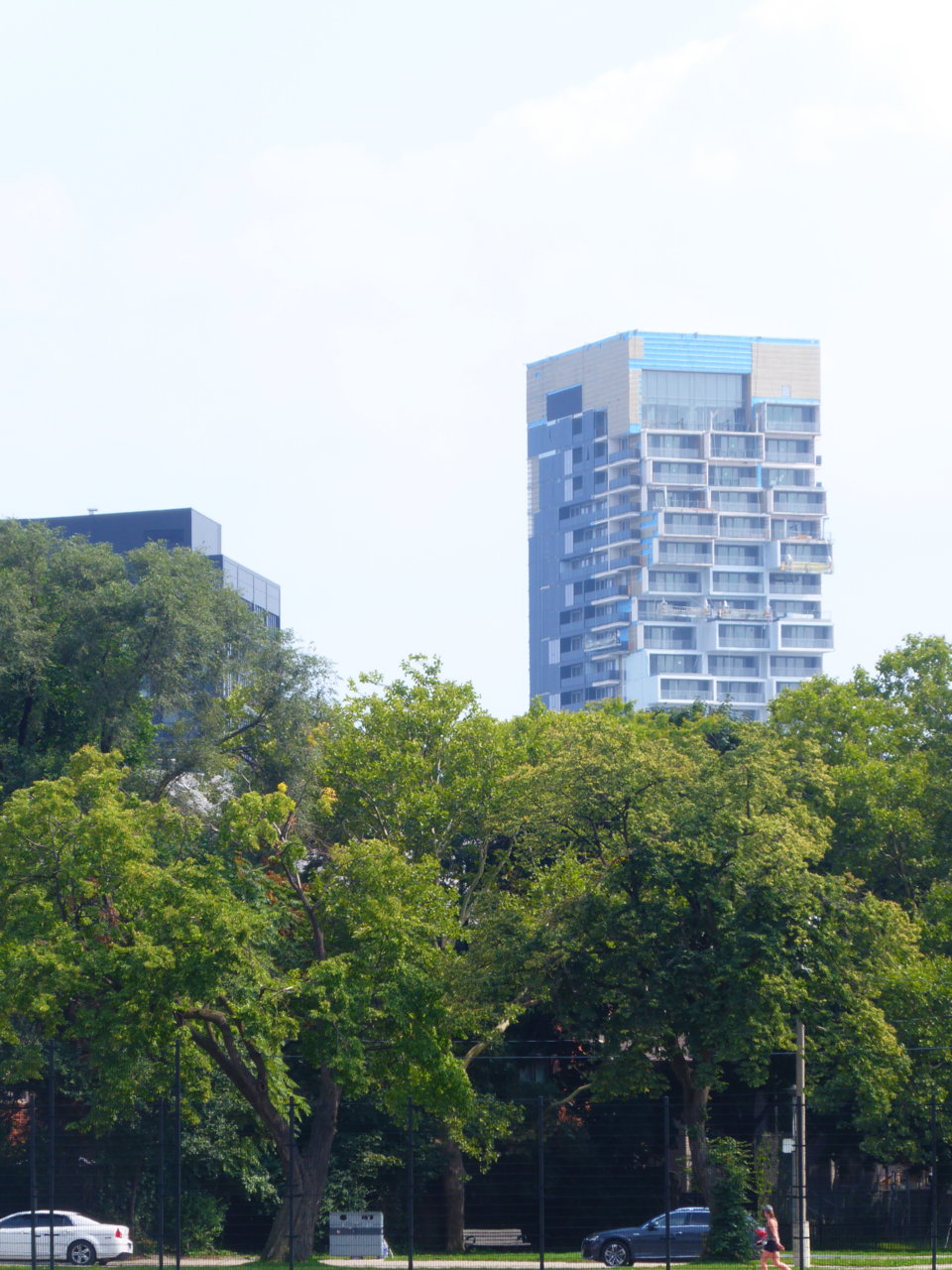 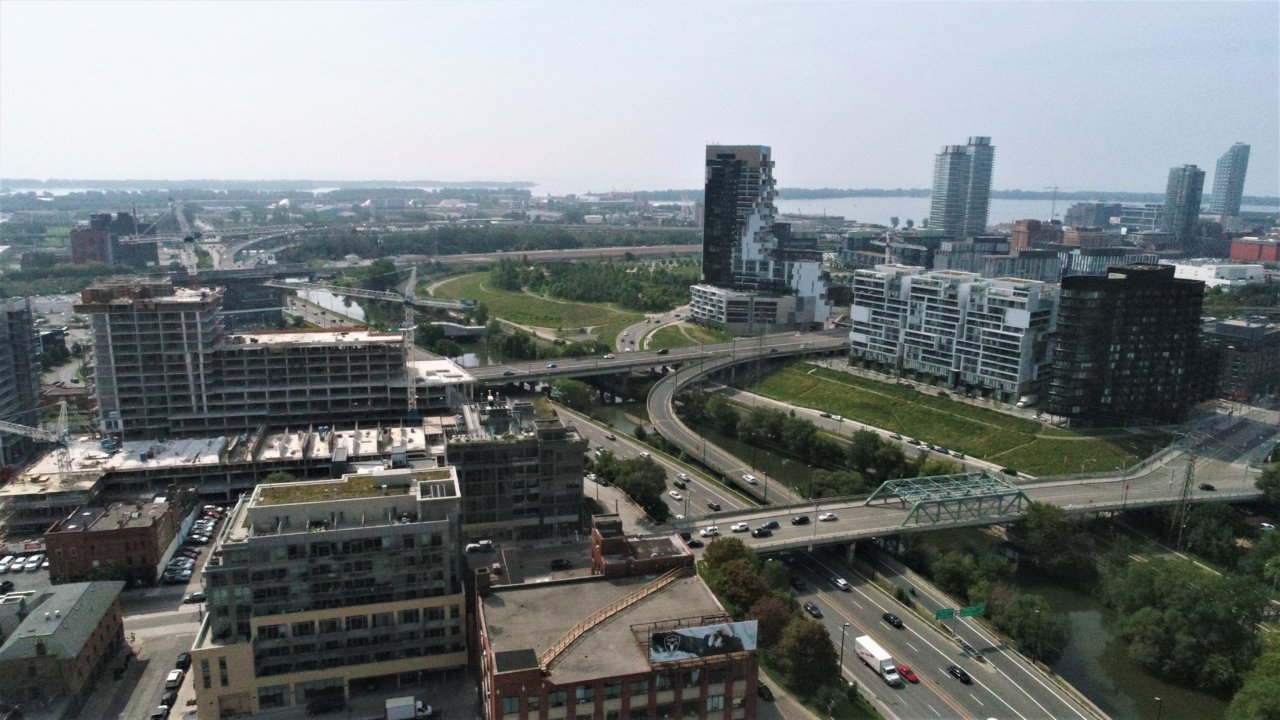 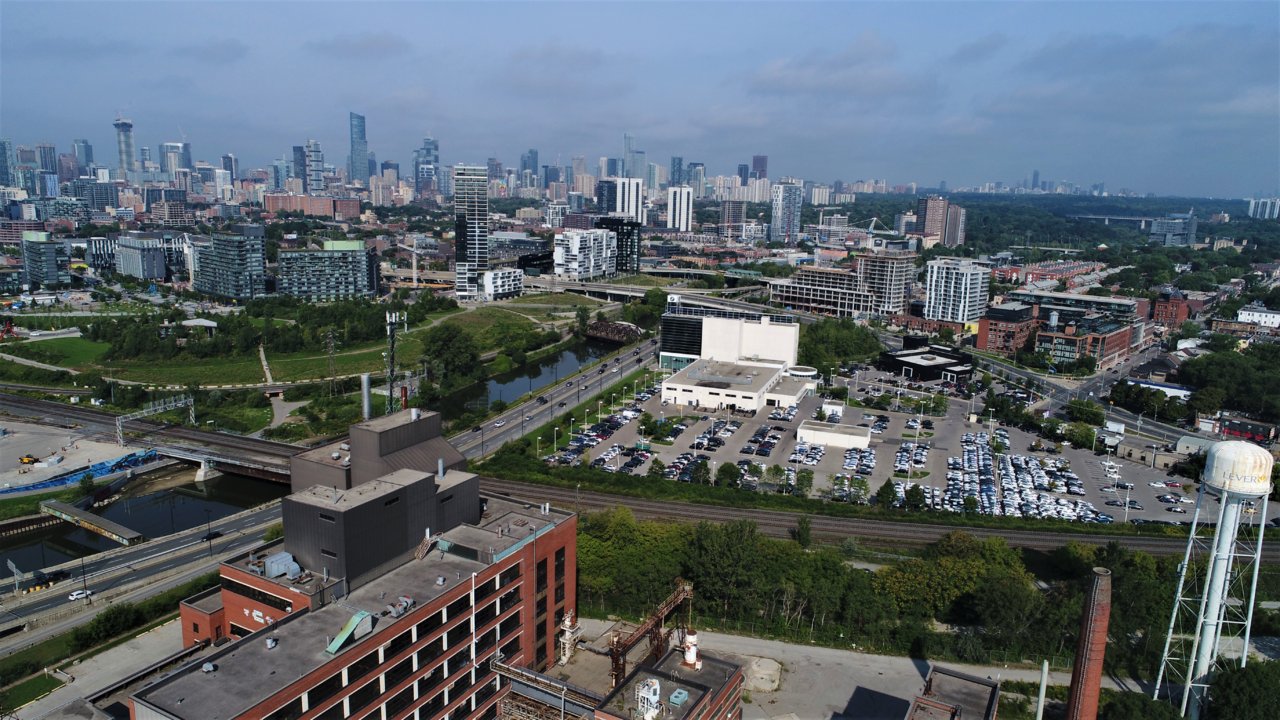 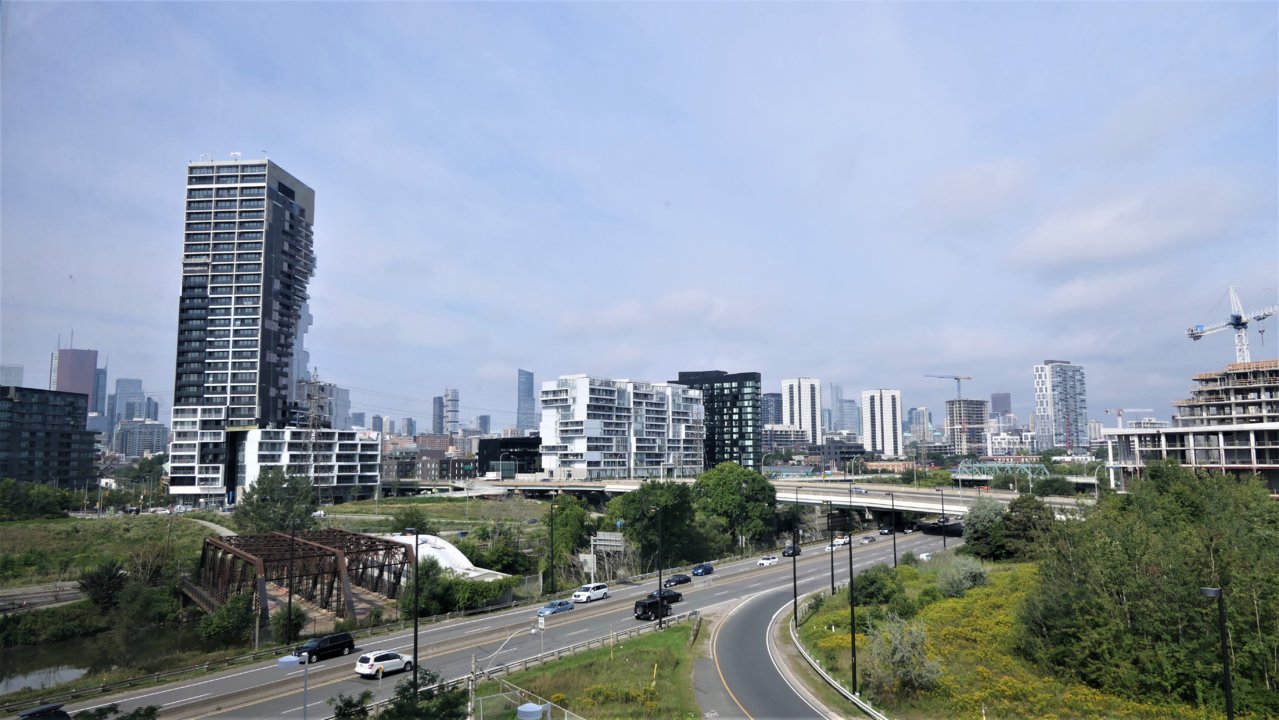 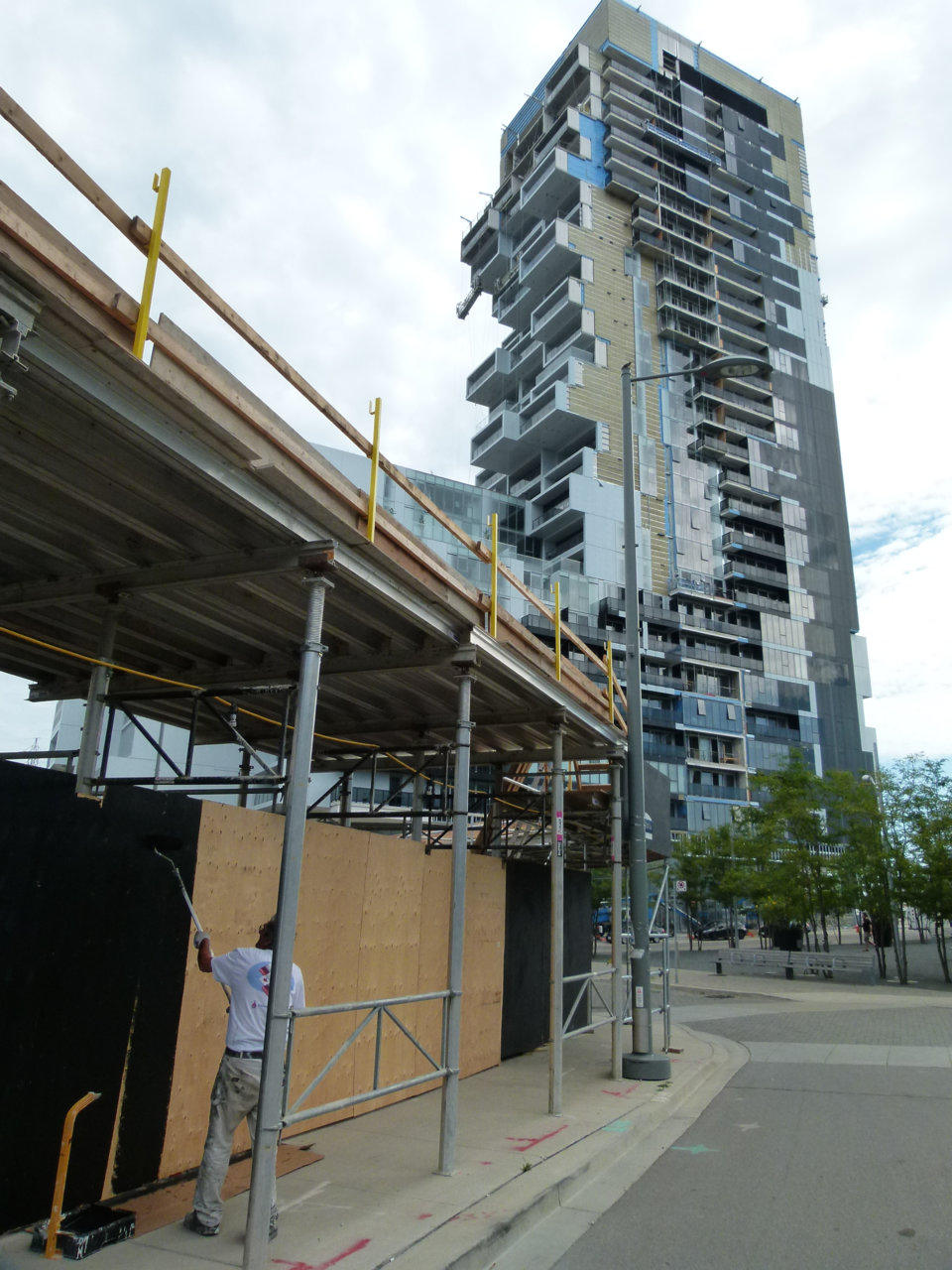 Liking the dark rich black backside. (I assume the peeled white strips will reveal all black). 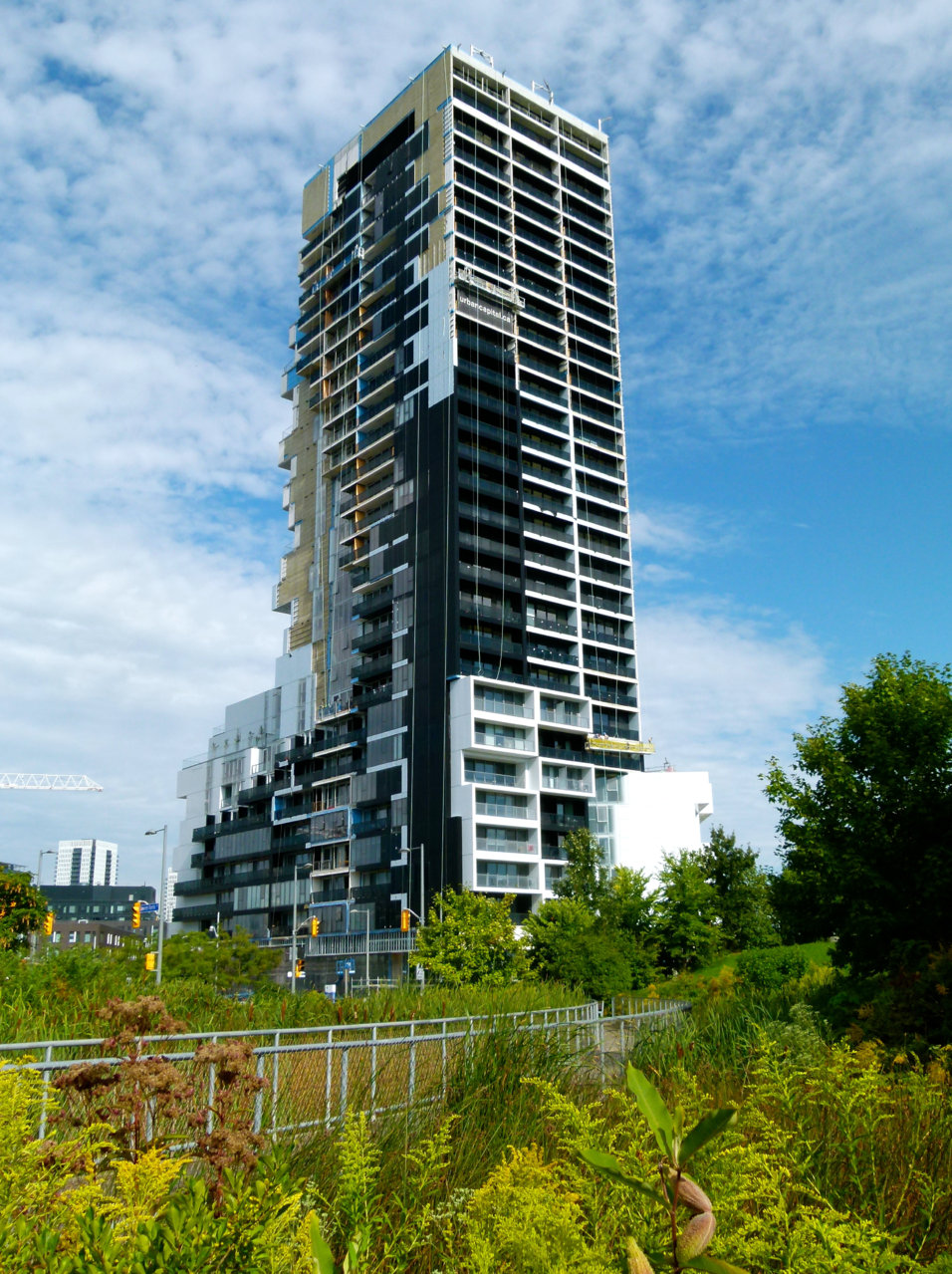 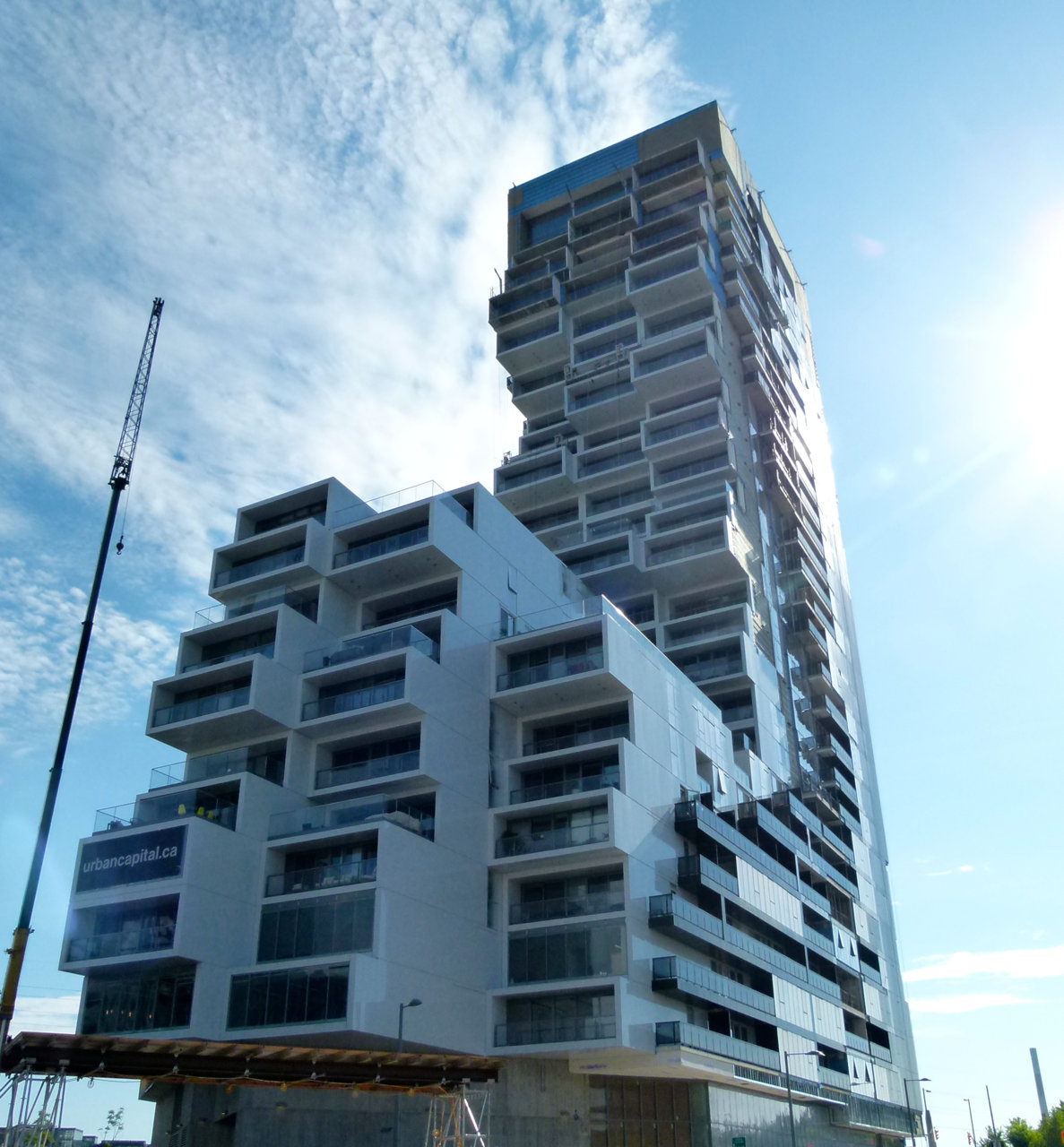 Nerves of steel for this crane operator... 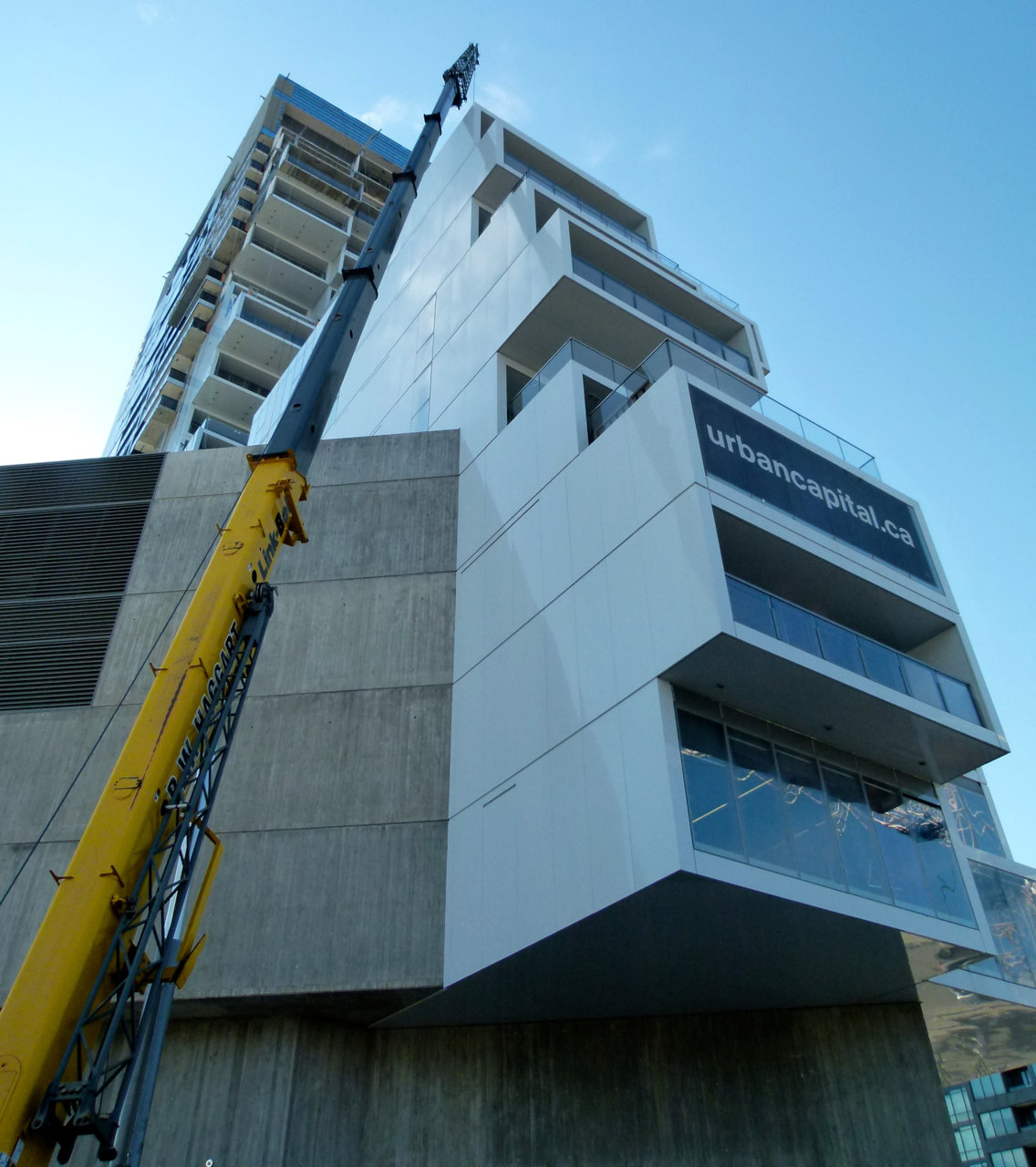 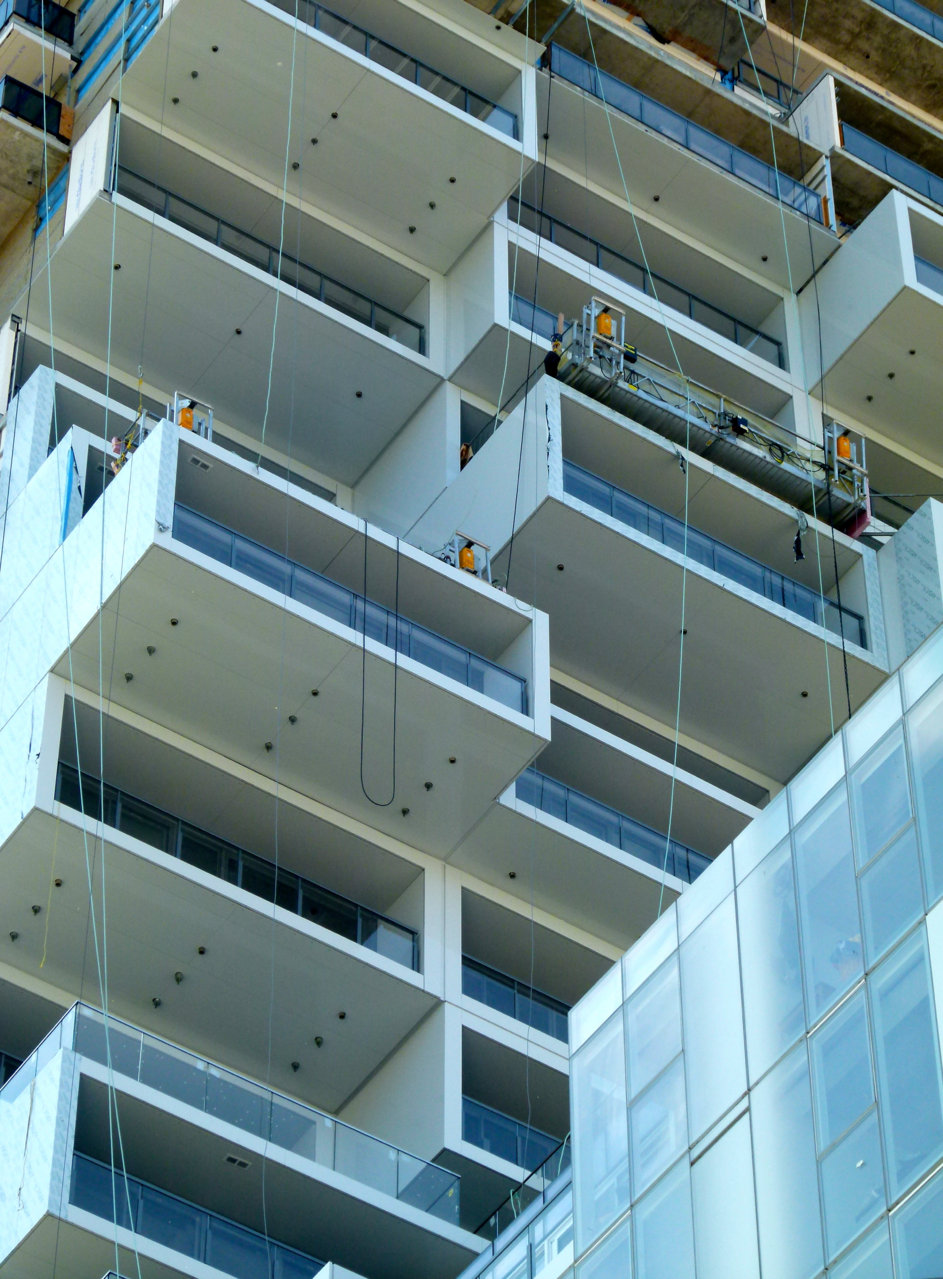 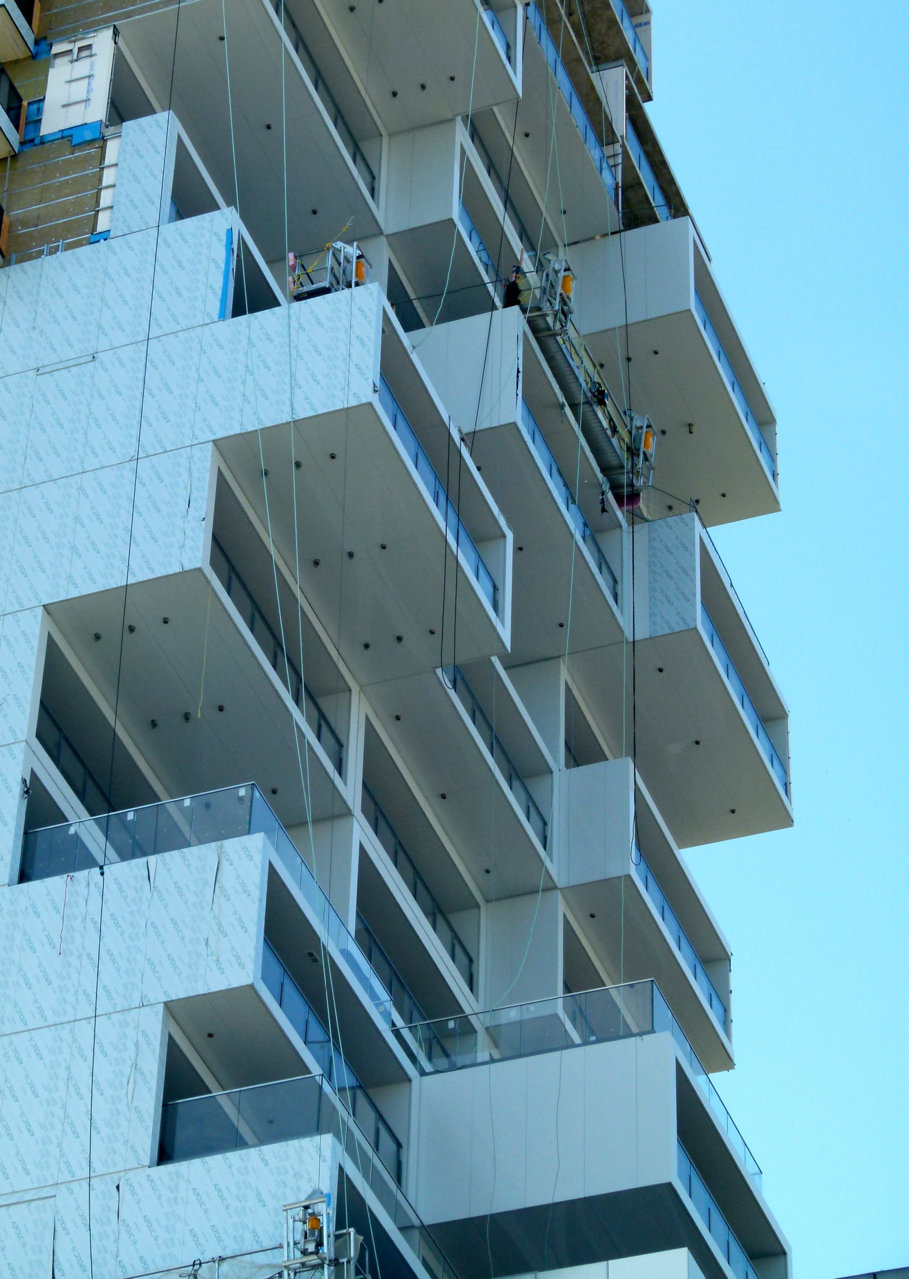 This fellow's hardhat has travelled more than my travel-weary luggage. 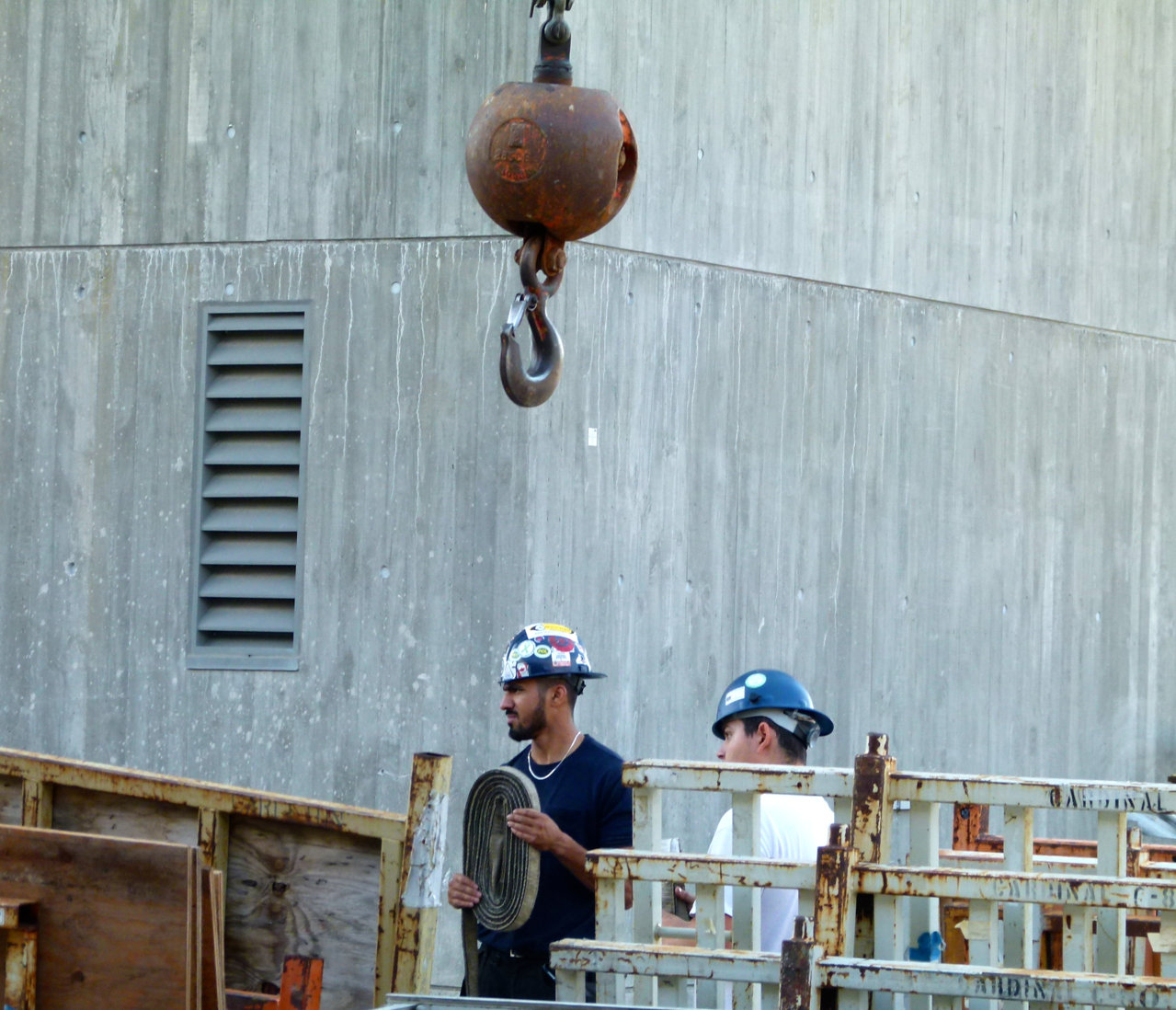 Taken a couple of evenings ago... 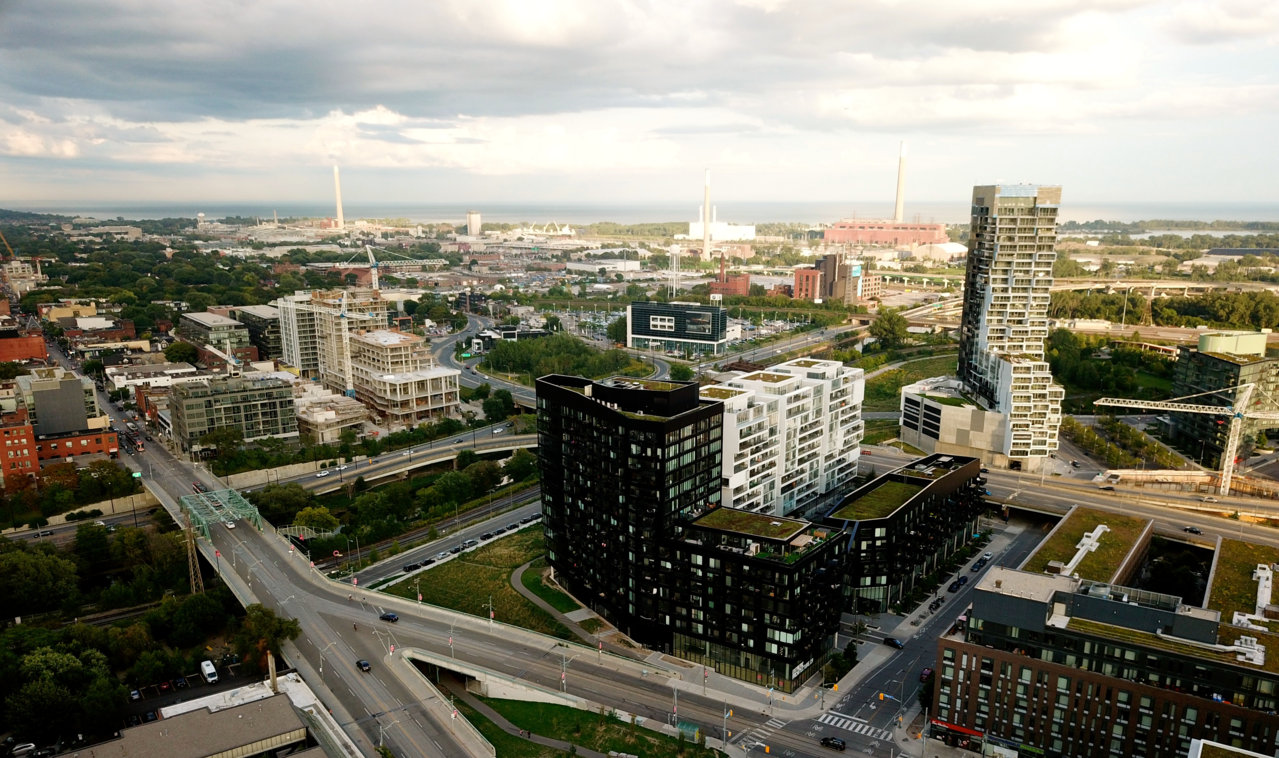 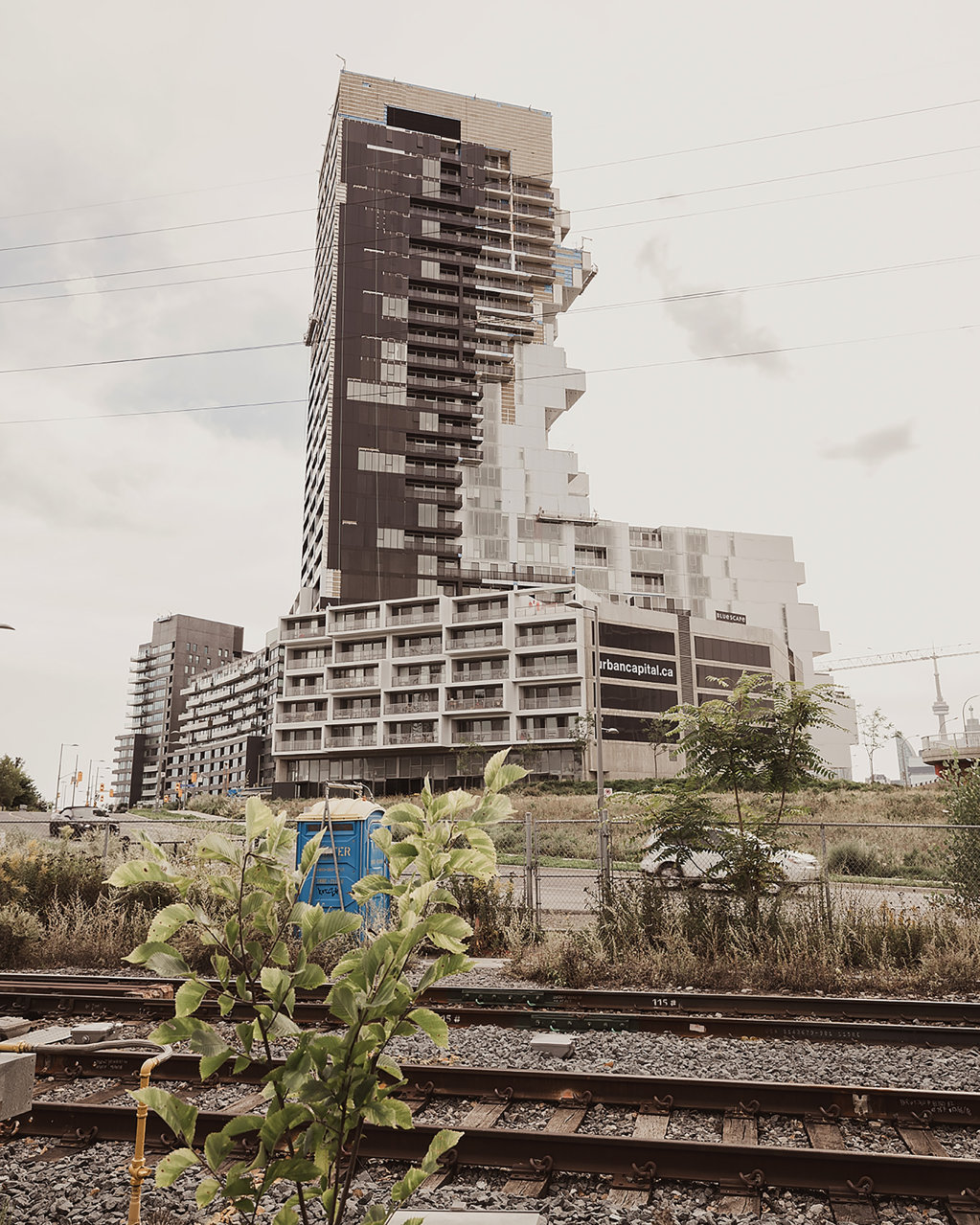 River City is by far my favourite condo development in Toronto. Phase 3 looks like it'll live up to the high standards set by the first two phases.