Newmarket to East Gwillimbury is only a tad longer than Mimico to Park Lawn, and DC Oshawa to Thornton Corners will be even shorter than both, so I don’t see why Mimico would need to close.

yrt+viva=1system said:
I’m shocked there isn’t asphalt on the platform!

Oh, just wait until the value engineering.
A

It won't be much of a problem when we have EMUs eventually to serve this line. Eventually Lakeshore West is going to get subway like service.
Member since February 10, 2002

Willybru21 said:
Newmarket to East Gwillimbury is only a tad longer than Mimico to Park Lawn, and DC Oshawa to Thornton Corners will be even shorter than both, so I don’t see why Mimico would need to close.
Click to expand...

Agree. Also there is a TOC deal at Mimico GO so it is 100% not closing. Both Mimico GO and Park Lawn GO will see significant density in the near future, and lack fast connections to Toronto’s CBD. With electric locomotives and shorter trains, I see no issue with local services stopping at both imo.
I

Good to see this finally coming to reality. I remember some claiming there would never ever be a Park Lawn GO station due to its proximity to Mimico.
T

Towered said:
No sign of a massive parking lot or garage! Baby steps - you can do this, GO Transit!

Why is parking a bad thing? Everyone screams that people refuse to use inconvenient transit but get mad when there is an incentive to use it
D

turbanplanner said:
Why is parking a bad thing? Everyone screams that people refuse to use inconvenient transit but get mad when there is an incentive to use it
Click to expand...

Parking is a bad thing for several reasons.

1) It disincentives the use of transit to get to a train station. This creates all the normal negatives of driving from pollution, to gridlock to safety issues.

2) It results in less and poorer bus service to said train station if people are driving. You don't get more frequent service when the buses run 1/2 full.

3) GO traditionally subsidizes parking offering it mostly for free with some reserved spaces for cheap, at a very considerable cost, which means there is less money for train service and a need for higher fares to offset the cost of the parking.

4) Parking itself creates a negative physical condition around the station. Who wants to walk 500M across a large parking lot, or along the blank wall of a parking garage to get to the nearest traffic light or bus stop?

Can some parking, at some stations, sometimes be a good thing? Sure!

By and large this would be at suburban and ex-urban stations where driving is more common and where transit service is simply not going to be able to capture the majority of GO riders in the foreseeable future.

However, it still needs to be paid parking, so that, at the very least, it isn't subsidized by the train fares or eating into service-provision budgets; preferably, it would be a luxury, priced accordingly which helps subsidize the train service.

Beyond that, when charged for; there will be less parking, and it will be provided at lower cost; which again, favours transit.

There's also the matter of making sure people are easy walking distance to the station, and ideally to retail; with the ideal spot, most often, being right next to the station, where parking tends to go.

Again, this can be mitigated by building residential buildings with little to no resident parking, but commuter parking (paid) underground. Most people here wouldn't oppose that, where there was demand, and it made economic sense.

What they oppose is large parking garages that induce people to drive to a GO station, rather than walk, bike or take the bus; and the associated subsidy.
Last edited: Nov 10, 2022
An environmentally conscientious, libertarian inclined, fiscally conservative, socialist.
D

also there's no room for parking, they'd have to make it underground which makes it expensive for something metrolinx was super hesitant to even build in the first place because of mimico station.

it's also surrounded by towers and a food terminal with roads/gardiner ramps all around it.
E

I remember at one point, phase 1 of the Christie Factory site was going to be 2025
D

I remember at one point, phase 1 of the Christie Factory site was going to be 2025
Click to expand...

the expected start for 2150 lake shore is 2024, if i remember correctly

so this station might be started sooner than you think.

We don't know what the service pattern will be yet; but there is speculation that Parklawn and Mimico will be stops on alternate runs when service is more frequent (ie. if service is 15M, then each station will see service every 30M). But that's not yet clear.

The IBC for this station did mention that the station would be served with full local service. 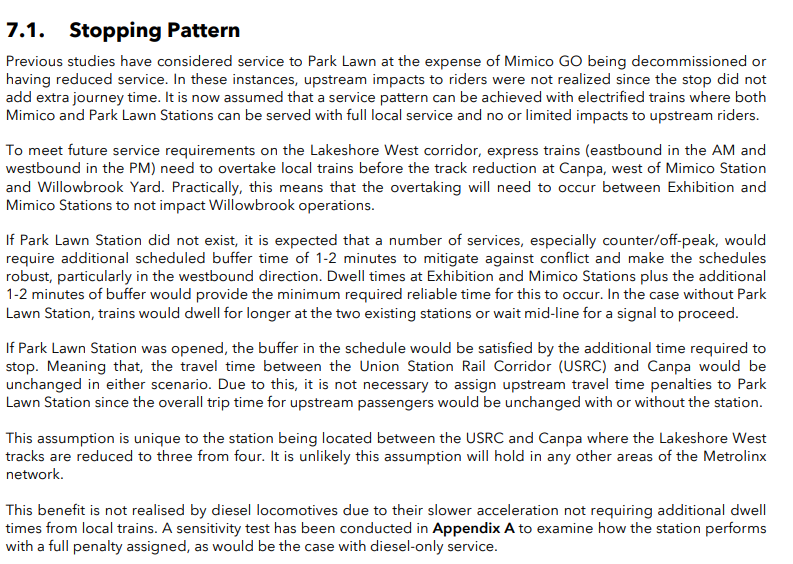 turbanplanner said:
Why is parking a bad thing? Everyone screams that people refuse to use inconvenient transit but get mad when there is an incentive to use it
Click to expand...

Do you really think we need a giant parking garage so people can drive for 30 seconds from their condos along Marine Park Drive to the GO station? Really? This station will be served by buses, streetcar routes, bike lanes, it's hardly "inconvenient transit".

TossYourJacket said:
Do you really think we need a giant parking garage so people can drive for 30 seconds from their condos along Marine Park Drive to the GO station? Really? This station will be served by buses, streetcar routes, bike lanes, it's hardly "inconvenient transit".
Click to expand...

What is Good is it for bus riders when you have 30 minute service like today?? Depending on what happening on the 501, you may see a car every 10 minutes to an hour. The 501L will see service every 10 minutes. You will have about 25% of the Humber Bay residents driving and parking at the GO Station as well 75% of the surrounding area.

At the end of the day, there should be next to no parking for the GO station and you will find drivers waiting where they shouldn't be in the first place.

I have call for a huge parking garage at Humber Loop connecting to/from the Gardiner so those driver can use GO to get to the east than sit in gridlock.

At the rate things are getting built for ML these days as well for the Phase 1 of the site, don't plan on seeing the station until 2035.
Due Time restriction, visit my site https://www.flickr.com/photos/drum118/ to see updated photos of projects shot the last few weeks since I don't have the time to post them to various threads.
See my videos on YouTube https://www.youtube.com/user/Transitdrum118
A

I never thought this day would ever come, after this station has been mused about since ~2008.