That's very weird. It's like some sort of quantum superposition.

Curious. Craft closed on this on May 10 for $14.7m. Purchased from CNR.
Twitter

pennies on the dollar. They either made out like bandits on this from CNR, or this is a much less feasible development than many thought. That's probably 1/20th of the land value for an unencumbered site that can accommodate a development of the scale they have proposed.

I imagine most of that reduced price comes from the costs of building the decking for the project.. Hopefully it's a good indicator of how much the city (or rather how little) will have to pay to expropriate it from them.
S

^ ORCA may have acquired something, but not the air rights or any material land claims.

ProjectEnd said:
Curious. Craft closed on this on May 10 for $14.7m. Purchased from CNR.
Click to expand...

The development site is comprised of several parcels. That's one of them.

Correct. This was for approximately 4.5 acres. The total development parcel is 21.2 acres.

They got roughly what is outlined below: 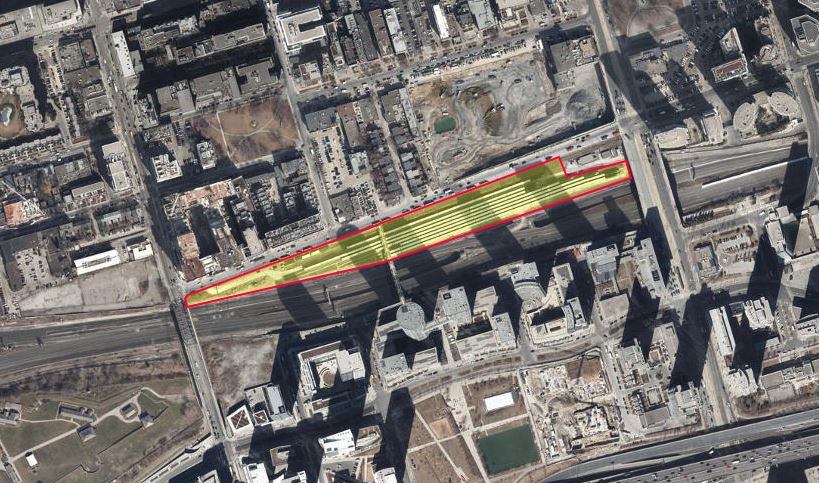 A fun game here is looking at all the ways the City planning department subtly skewed things to make their proposal look better. Note, for example, that even though it is the SAME PIECE OF LAND, the CRAFT proposal gets shown from the north, as a big hunk of towers blocking out the lake. The park, on the other hand, is shown from the south, , making it look like an island and an intrinsic part of the waterfront. Even though the CRAFT proposal also includes a substantial park they propose to donate to the City, it can't be called a "park," so it's just unquantified "open space," and because the view is from the north, you can't see it. It looks like it's all buildings. And the City's description offers a helpful explanation that unlike that stupid private development - which presumably serves no purpose - this is to ensure there's enough park space for people downtown etc.

Last time I was there, which was admittedly a while ago, all the CRAFT signs were tagged with graffiti too.


innsertnamehere said:
pennies on the dollar. They either made out like bandits on this from CNR, or this is a much less feasible development than many thought. That's probably 1/20th of the land value for an unencumbered site that can accommodate a development of the scale they have proposed.
Click to expand...

Interesting. There's so much up in the air with this project it could go any number of ways. In the meantime, CRAFT has a sliver of land the City wants/needs for the park. So, at worst, some expropriation $ and at best a nice beachhead. I don't know how much I'd read into the value - it's a value that's contingent on a lot of other things but it's "worth more" than whatever they paid for it.[/QUOTE]
Last edited by a moderator: May 31, 2019

I maintain that CRAFT has 0 intent on actually building this. It is purely a land value capture exercise in an attempt to flip the land from CNR to the city for a much higher price and turn a tidy profit. Look at CRAFT"s portfolio - it's full of strip malls in Keswick and Brantford for f*cks sake.. This isn't Oxford or Related we are talking about here, multi billion dollar corporations ready to take on a project of this scale. This is a small family business trying to cash in on the political machinations of John Tory.

The whole purpose of this rezoning is to get entitlements for the density so that the city will then be forced to expropriate at the inflated price as if it were actually developable land. In comparison, CRAFT purchased it from CNR for pennies because it's literally just crazily encumbered air rights.

The fight isn't going to stop at getting it approved - next would be the expropriation and hearings on fair market value. The city will push that the development is completely unfeasible and therefor the land is more or less worthless - while CRAFT will try to paint the narrative that this is some untouched gold mine of development profits.
S

ProjectEnd said:
Correct. This was for approximately 4.5 acres. The total development parcel is 21.2 acres.

They got roughly what is outlined below:...
Click to expand...

Which is rather telling. None of that was covered under the Esplanade Tri-Partite Agreement. That land you illustrate was never ceded to the Dominion of Canada in exchange for the properties adjacent to the USRC, which remain as per:

all works done or to be done in order to give effect to the agreement hereinafter mentioned, as well as those affected by it, are hereby declared to be works for the general advantage of Canada.

They cannot, therefore, be considered as private works of railway companies. They are to all intents and purposes federal works remaining under the exclusive jurisdiction of the Dominion Parliament, under section 92, par. 10, of the British North America Act. [...]
Click to expand...

I have a question for the group.

Forget, just for one moment whether, CNR has the legal right to sell 'air rights' at this location.

Just suppose they do.

But Metrolinx owns the rail corridor itself at this location.

So, in order to take advantage of 'air rights', one still requires the ability to use the land below, to build support columns for a deck on which development can take place.

Surely this would require the consent of the land owner?

Is there any evidence of this having been obtained?

Northern Light said:
I have a question for the group.
Click to expand...

Incredibly by today's discussion on this very topic, your question is addressed in the "esplanade tripartite agreement"
https://books.google.ca/books?id=BupHAQAAMAAJ&pg=PA189&lpg=PA189&dq=esplanade+tripartite+agreement&source=bl&ots=1r3QCh3GQQ&sig=m3aC8FL30UEVJTw4obMrIh0Q7no&hl=en&sa=X&ved=0ahUKEwjJ5MnChIPZAhUH7IMKHTnmCYQQ6AEITjAF#v=onepage&q=esplanade tripartite agreement&f=false

It not only spells out what bridges are to be built *FOR* the City by the railways over the Esplanade, but even the costs of the sewer that runs along the present Esplanade through the Union Station 'moat' immediately south of the subway,, and north of the present Union Station building. The Agreement actually states costs per month to be paid to the City.

Also detailed are the terms for the "viaduct". I leave it to readers to access the link above. Hint: read back as well as forward from the page that link takes you to.

All the claims you will read there have been reaffirmed by SCC rulings and citations.

Some retrospect with the issue in discussion today:

interchange42 said:
Interjecting as a reminder: the City also claims ownership of continuous strips of land along the south side of Front and along the north side of Iceboat Terrace which, should the City refuse to allow right-of-way across them, would make the air right properties much tougher to connect to the city around it.

So the lands (err... air) become designated parkland in the OP.

Now the city has to buy it. Can it buy it at the price point of it being parkland, or as the "extremely profitable and super-duper-uber valuable" price that CRAFT is trying to paint it as? Especially considering CRAFT has been purchasing it from CN for pennies..
J

Bigger issue still is can the city actually build this thing during our lifetime?
How long has union station been under construction?
The bridge over from Stanley Park to Fort York is in its 15th year and is only a 25 million dollar project.
Does anyone seriously think this is possible?
T

innsertnamehere said:
So the lands (err... air) become designated parkland in the OP.

Now the city has to buy it. Can it buy it at the price point of it being parkland, or as the "extremely profitable and super-duper-uber valuable" price that CRAFT is trying to paint it as? Especially considering CRAFT has been purchasing it from CN for pennies..
Click to expand...

Yeah, this is kind of the thing. They won the right to build the park, on principle.
They still don't own any of the land air/rights so... Could be a bumpy ride for Toronto taxpayers.
Oh, well - at least we can take solace from the province strengthening the elements of the Planning Act related to bonusing in Section 37 and for parkland dedication, in Section 42, right?.....right?